I knew something was up when my husband told me he was going to meditate before bed. For those who know my husband, he doesn’t meditate. I immediately wondered if he were having an affair. I later discovered he’d started something new – the DeRose Method. 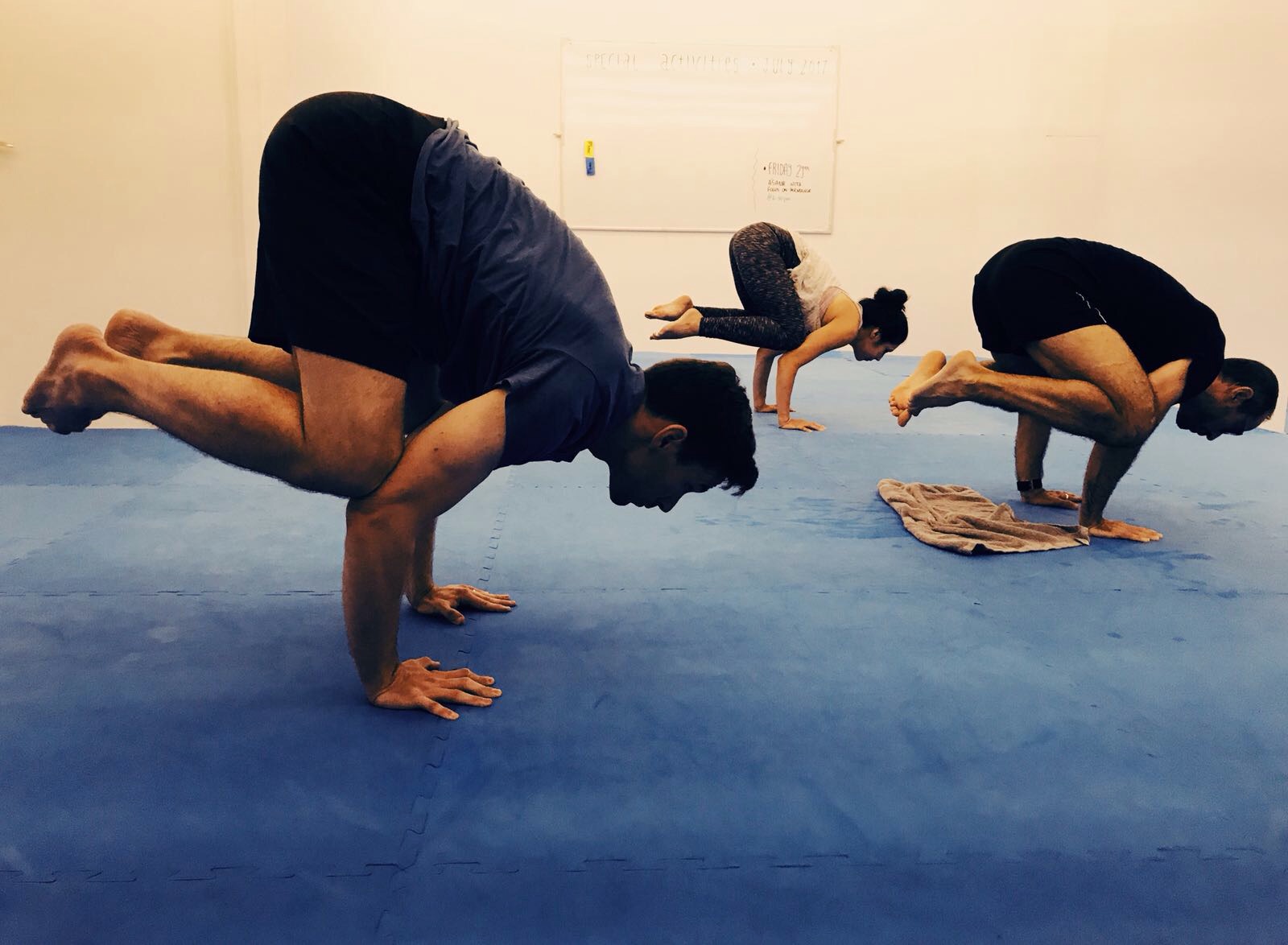 My husband, myself and another student all hanging about in crow pose. Or Bakasana.

It’s hard to know how to to describe the DeRose Method. Whilst it is similar to yoga in that it uses asanas, there’s no traditional flow, no downdogs in sight and no terms, such as Warrior Pose. And it doesn’t do it justice to call it ‘yoga’; it’s so much more than that. It’s been described as ‘a fusion of physical techniques and philosophical concepts, inspired by ancient traditions and taught through a combination of classes, courses and workshops.’

As a beginner, it also involves breathing exercises and snippets of history (which the instructors like to add in whilst you’re holding poses – you have to pray that they’re short otherwise everything starts to hurt even more!) When you’re considered more advanced, harder breathing exercises, choreography, meditation and other elements are introduced.

At my first class, I was nervous but excited. The DeRose Method is held at the Ady Centre a few minutes from Oxford Circus tube. It’s an inconspicuous building off a side street, one I’d never normally have wandered down. The Ady Centre is small but simple with all the necessities. I appreciate the small touches of hairbands in the toilet if you forget yours and an area for making tasty teas after (ok, so I’ll admit, I only go for the chai tea after…).

I’m greeted at the door by Paulo, one of the two instructors who taught me over the month. He’s Portuguese and strong. And bendy. We start with breathing exercises and over the course of the month, I’d come to learn that breathing really is an art, as well as a way to alter the state of the body. It also turns out I’ve been breathing ineffectively all my life, which has most likely contributed to tense shoulders and hasn’t helped with the anxiety I can get during periods of extreme stress.

After breathing exercises, we move onto asanas – balances, poses and positions which push our flexibility, test our strength and require focus. And the way you breathe very much impacts your success with these. The main difference I noticed with these positions was that whilst there was a connection between one position and the next, there wasn’t necessarily a flow. And thankfully, there weren’t a thousand sun salutations in sight (ugh, does anyone else find these so dull?) although I do have a fondness for downdog to chaturanga to cobra and missed them so much, that I started including them into my WARRIOR fitness classes.

Some asanas are intense stretches, some require strength, some require balance – all are challenging and fun. The practice room is specially built with a foam floor so if (or should it be when) you face-plant, it’s not scary and doesn’t hurt. Even your ego remains intact as the other students are so lovely that no one cares, as long as you do your very best, a phrase which you’ll hear a lot during your session.

The hour flies by quickly and almost always finishes with a brief savasana (thank goodness, because I’m just here for the savasana, right?!) to seal the practice.

Over the month, no one lesson was the same – the depth of knowledge and variety of challenges that the teachers have at their fingertips seems limitless. Manu, the other teacher, also occasionally includes aspects of choreography which can be likened to a more traditional yoga flow except for the fact that it’s much more beautiful and dance-like. During these, I learn a little about mudras and deepen my respect for the DeRose Method.

Manu is also Portuguese and similarly strong. Manu likes to give you tidbits of the DeRose Method history which is interesting but they’re always craftily timed during particularly challenging poses. Both Manu and Paulo are fantastic teachers who are great at knowing when you can be pushed more. And some of the things they can do with their bodies are, in the true sense of the word, awesome.

The benefits of the DeRose Method were first noticeable during a Fit Friday session at Studio One, when I not only realised I was able to keep up better than most others in a Method session (I’d been to one the month before and massively struggled) but the instructor, also remarked that I was strong. This really surprised me as I’d not felt strong since before I got pregnant in August 2016.

And it’s true, the changes I can feel after a month of the DeRose Method are many. These are, for me, the most prominent and important:

I’m more confident in my body: It’s hard to know how to describe this. It’s less about thinking I look good and more about a stronger connection between my body and mind. I know my body better and it can do so much more than I’m allowing it to!

I can breathe! Only those who have experienced anxiety or that familiar panic as the tightness in your chest sets in, can understand how this freeing this is. I am better equipped to deal with this and I’m starting to notice when my breathing isn’t as effective as it could be. When this happens, I remember the techniques which we start the sessions off with.

‘Normal’ yoga just isn’t the same: I surprised myself when I went to a Rocket Yoga class (which I usually love) and ended up feeling disappointed. I really missed taking the time to get into and remain in positions. I also injured my neck after feeling rushed to get into a headstand. I don’t mind more gentle yoga sessions but the frequent sun salutations are just a bit… boring… DeRose, YOU’VE RUINED YOGA FOR ME!

My body is stronger: I’ve recently been working on my cardio through the occasional boxing session at Studio One or Moreno Boxing, but nothing specifically around strength. But the benefits of the DeRose Method were first noticeable during a Fit Friday session at Studio One, when I not only realised I was able to keep up better than I thought in a Method session (I’d been to one the month before and massively struggled) but the instructor, Stephanie Tam, also remarked that I was strong. This really surprised me as I’d not felt strong since before I got pregnant in August 2016! Yay!

My body constantly amazes me: The way Paulo and Manu casually lead you into inversions before you even realise what you’re doing means that I’ll be in some balance with my leg over my shoulder and then my mind goes ‘WTF! HOW DID THIS HAPPEN?!!’ and inevitably I lose it and face plant. But the DeRose Method has taught me that my body can do things I never thought it could. And it’s happened with stretches where I’ve opened my eyes after a couple of minutes of breathing only to realise my nose is inches off the ground instead of half a metre.

Proprioception has improved: I’ve always been quite ‘good’ at proprioception, but the combination of having mirrors in the room and the fact that small classes mean that there’s lots of one on one attention, means that you can really get a feel of how your body should be. I’ve now found that I’m automatically conscious of how my body should be during other fitness classes. 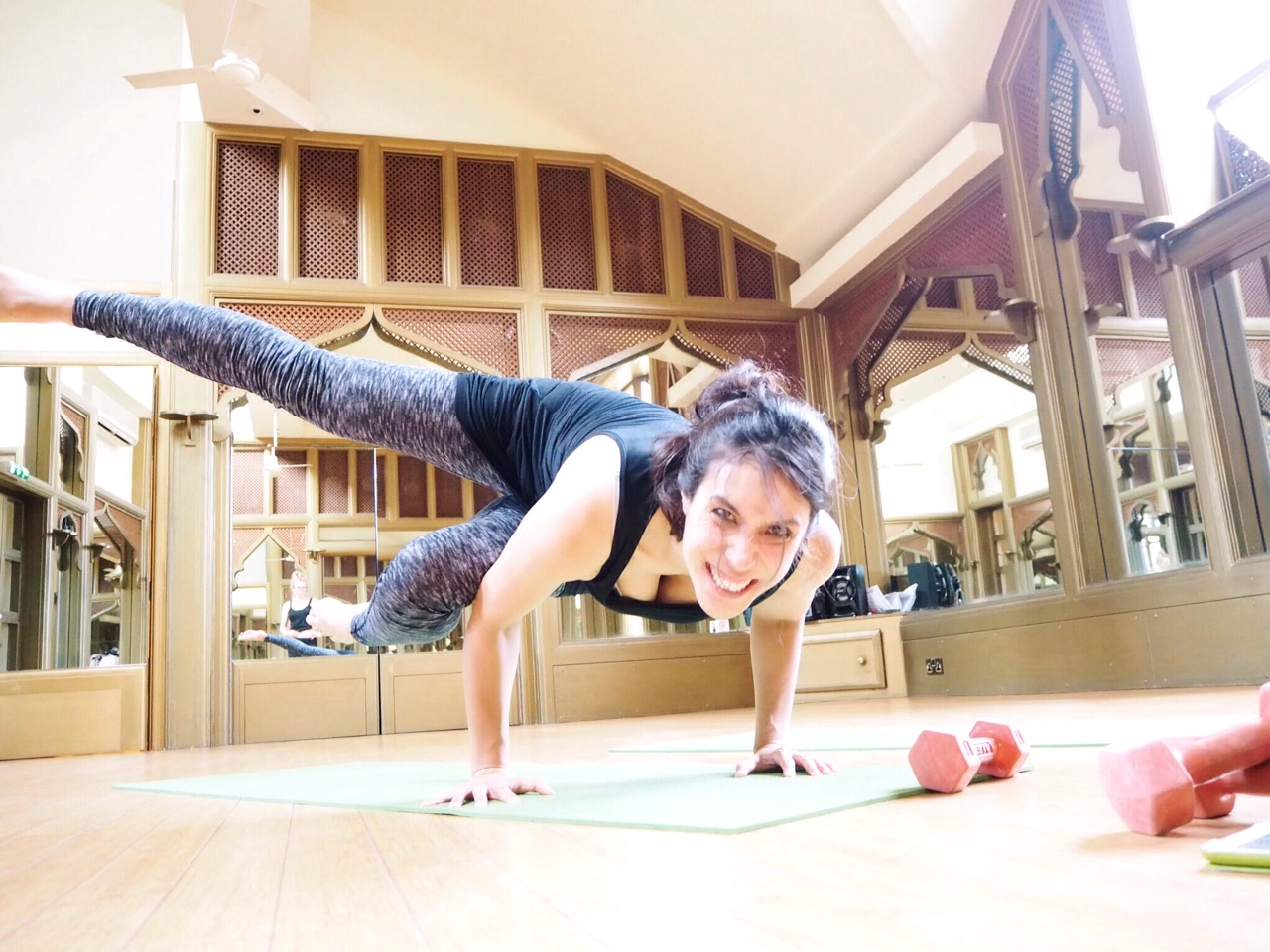 Practising DeRose Method on a Spa Break weekend at Careys Manor in the New Forest. 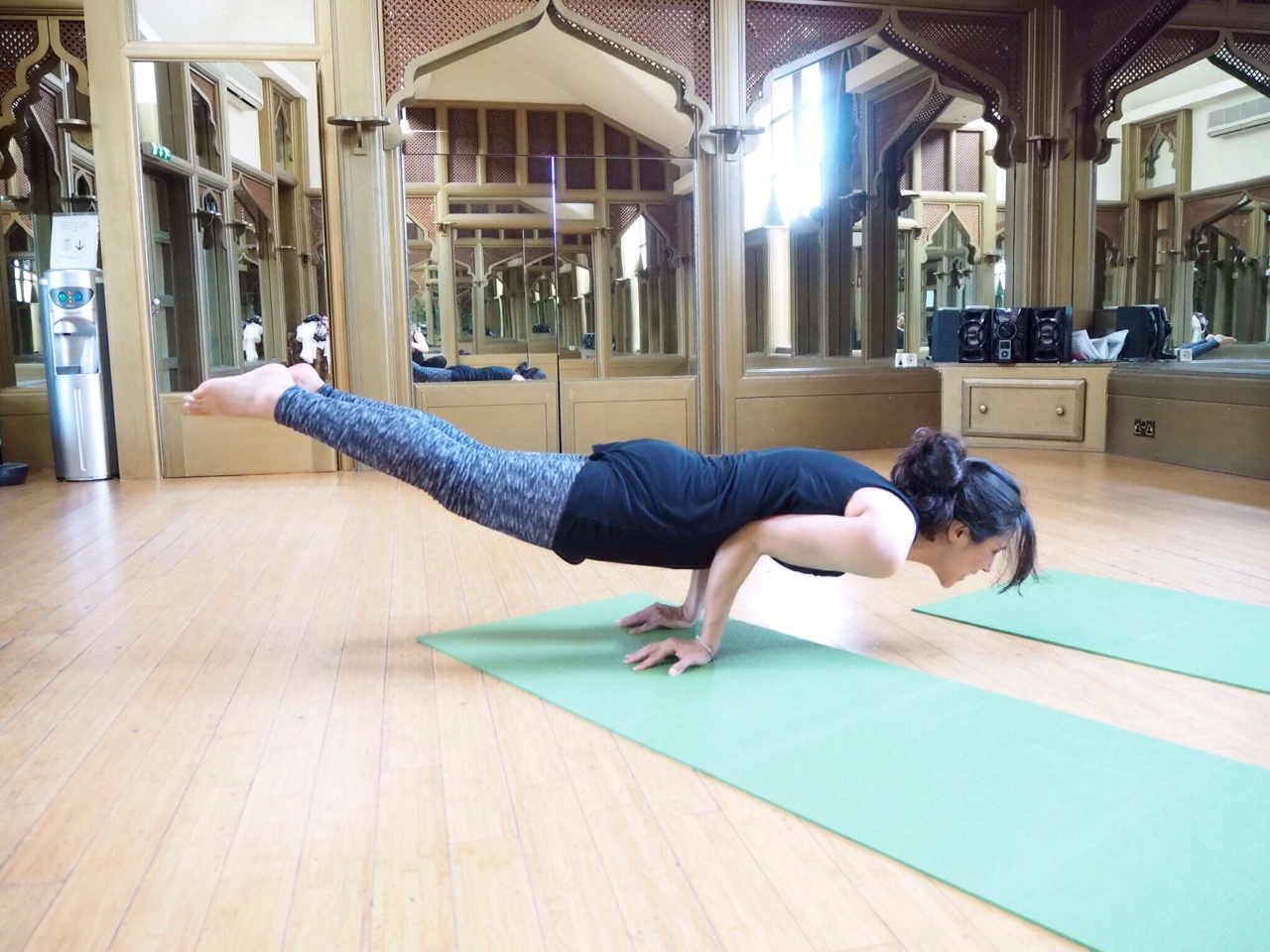 Not a good asana to try after a meal. 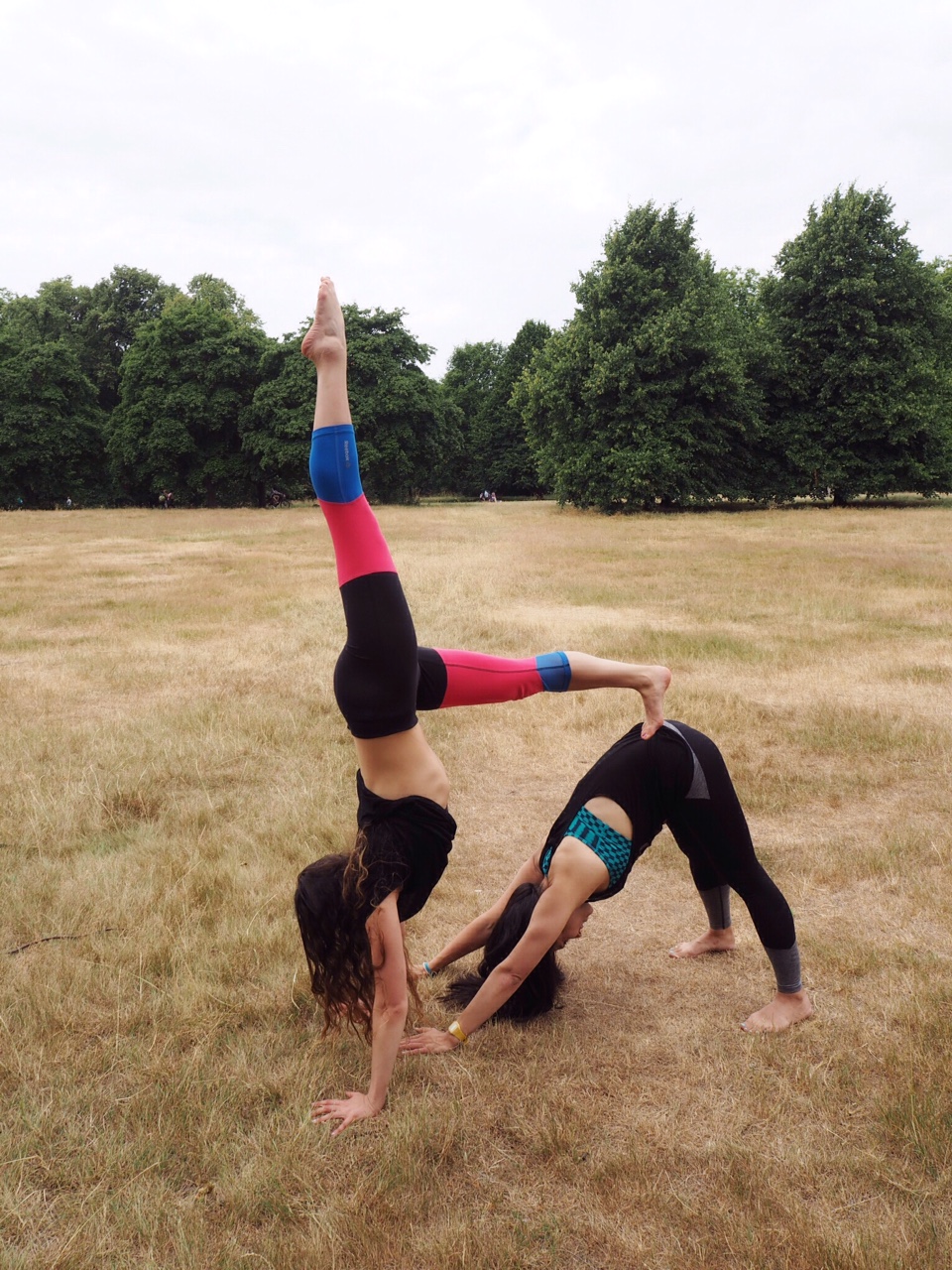 Making shapes with my sister in Hyde Park 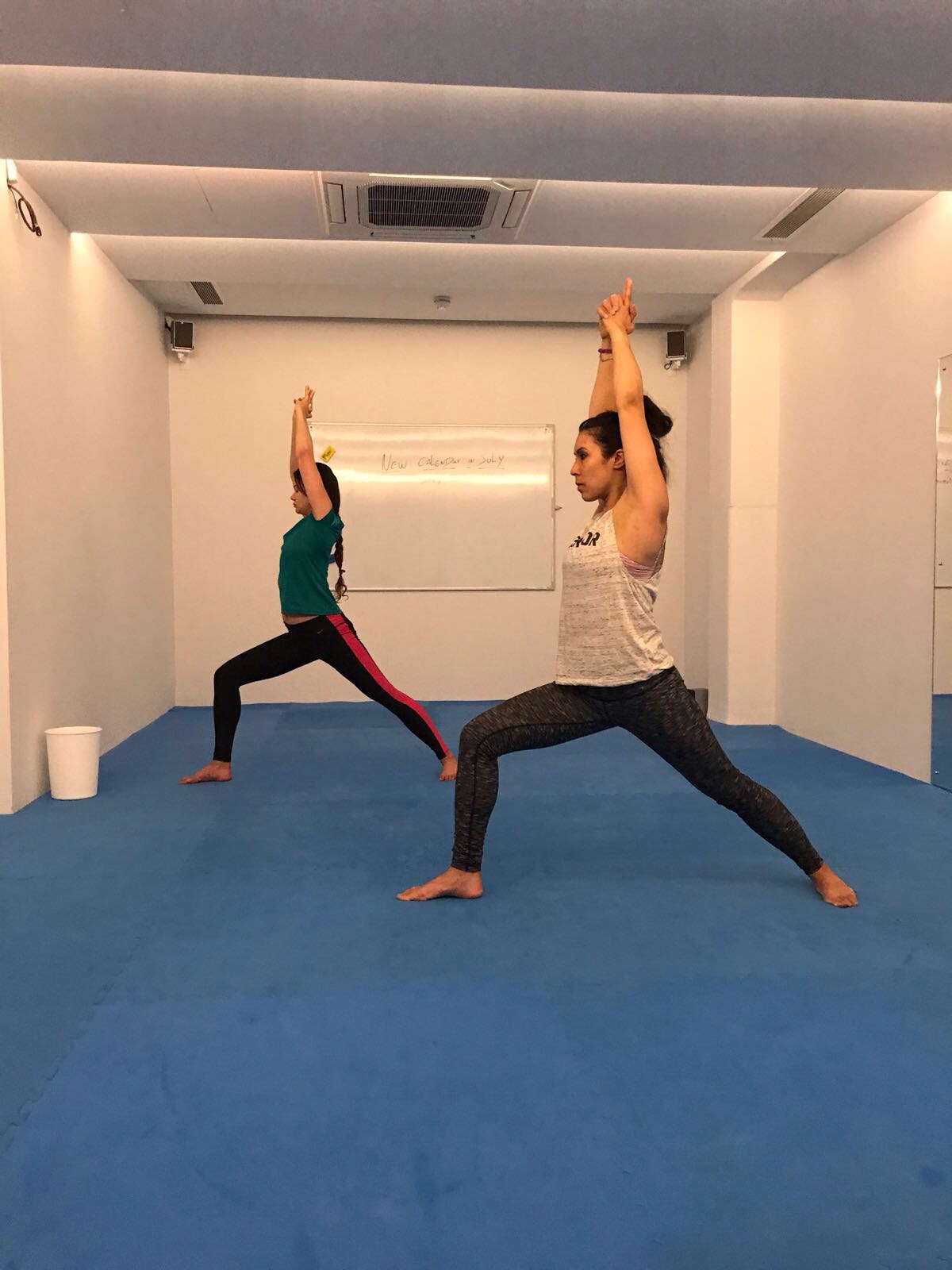 The torture / practice room. A fun session with my sister. 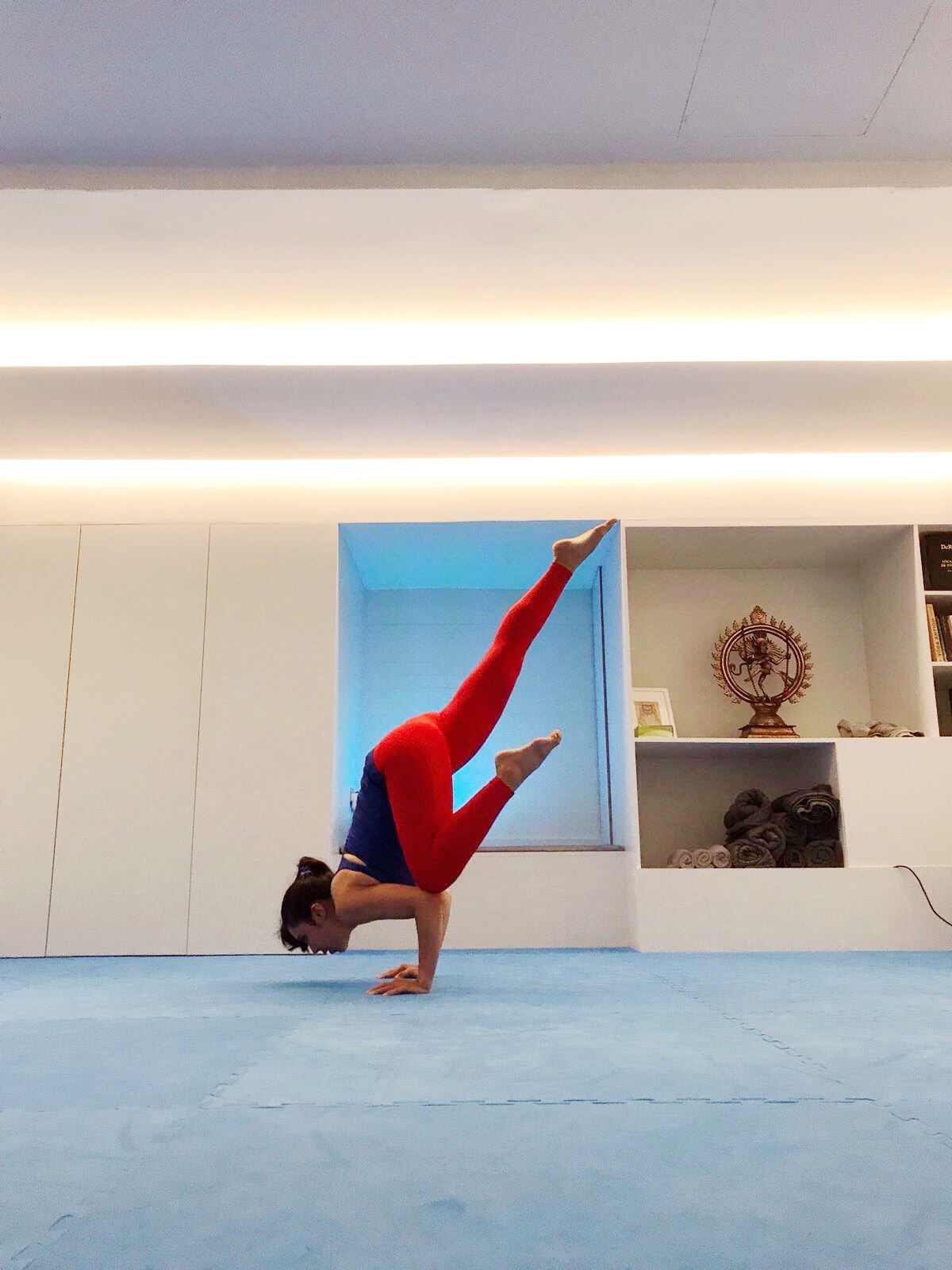 Eka Pada Bakasana – or Flying Crow. This took me several months before I didn’t face plant. 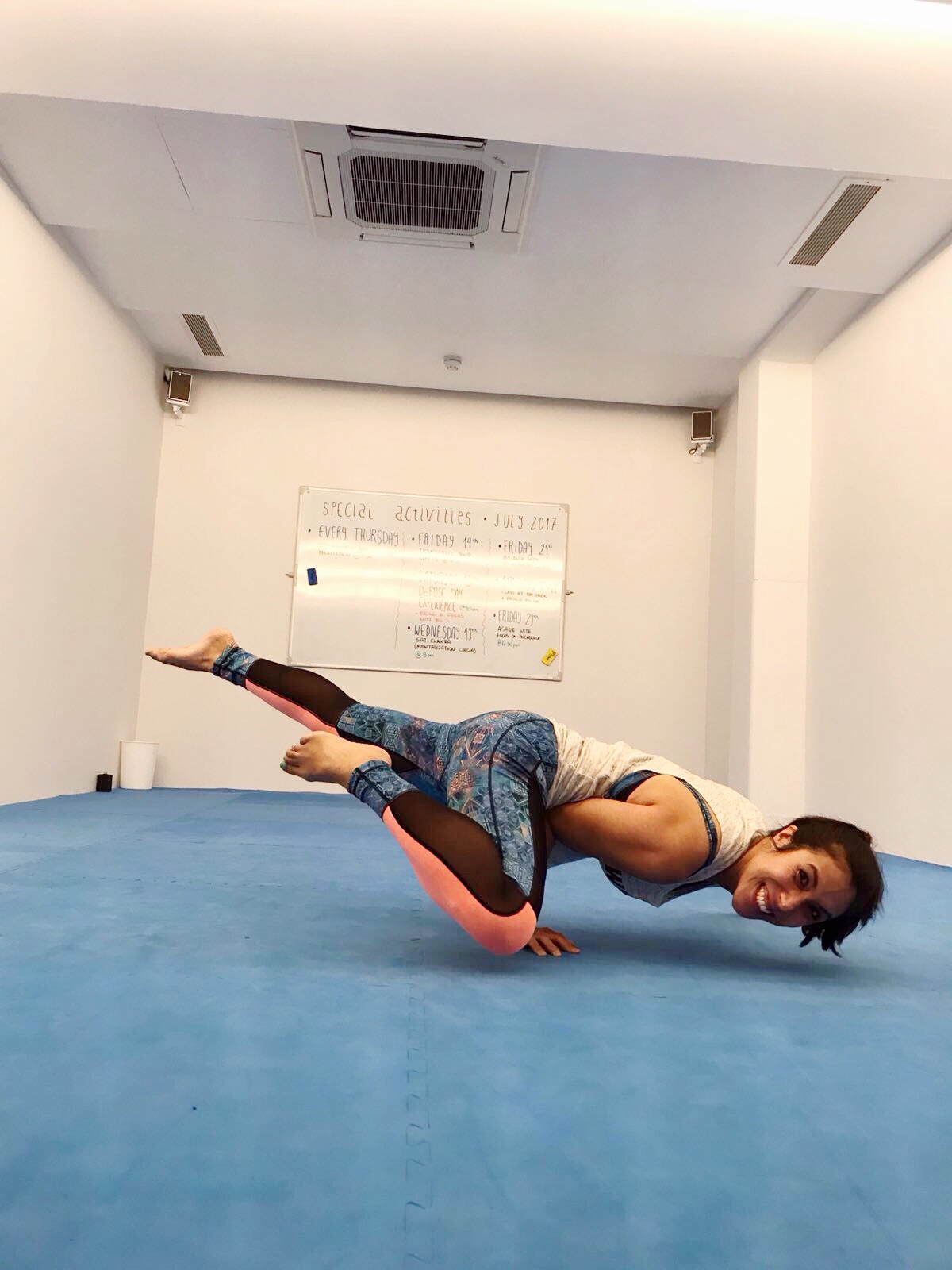 No idea what this balance is called! 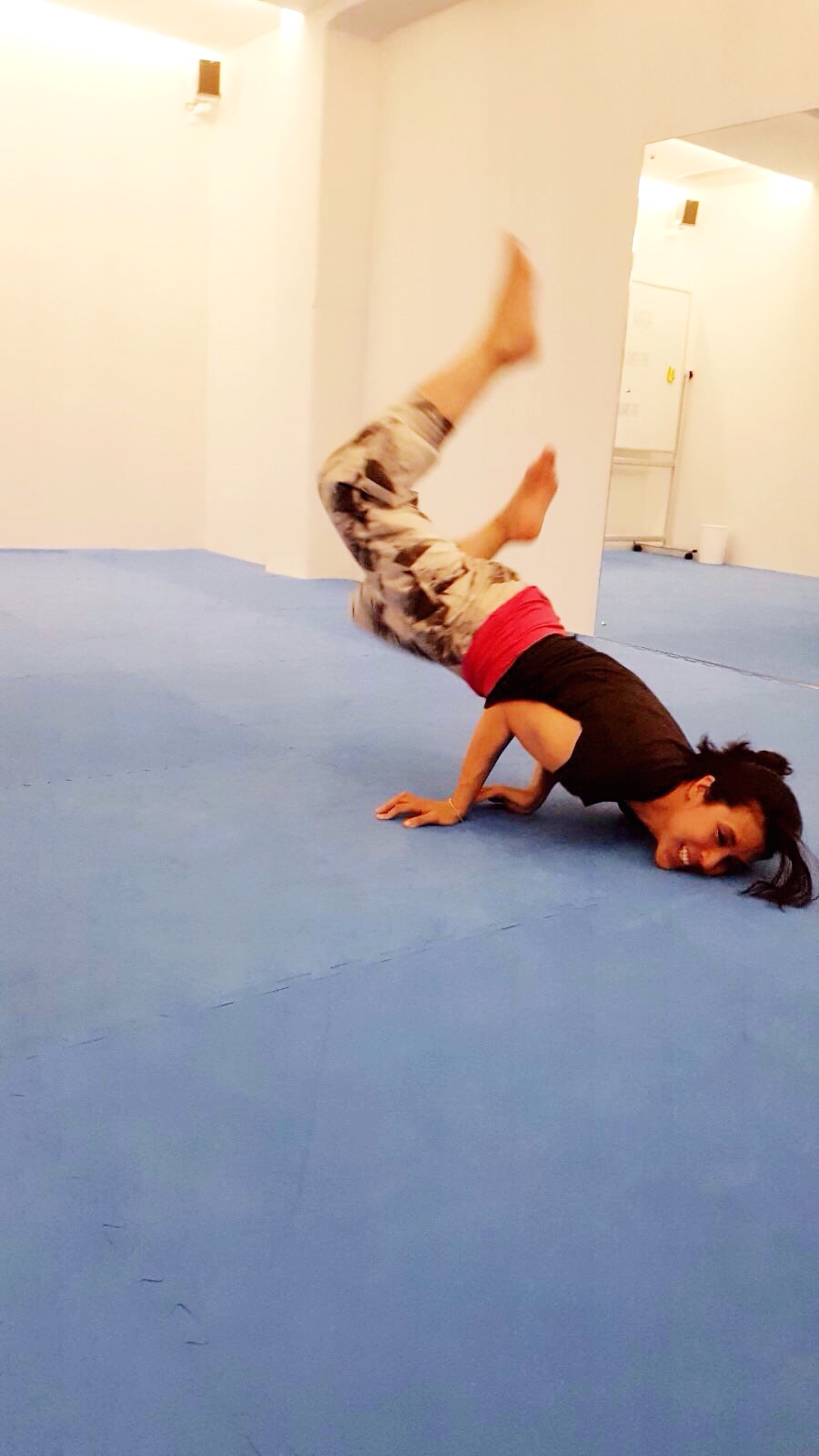 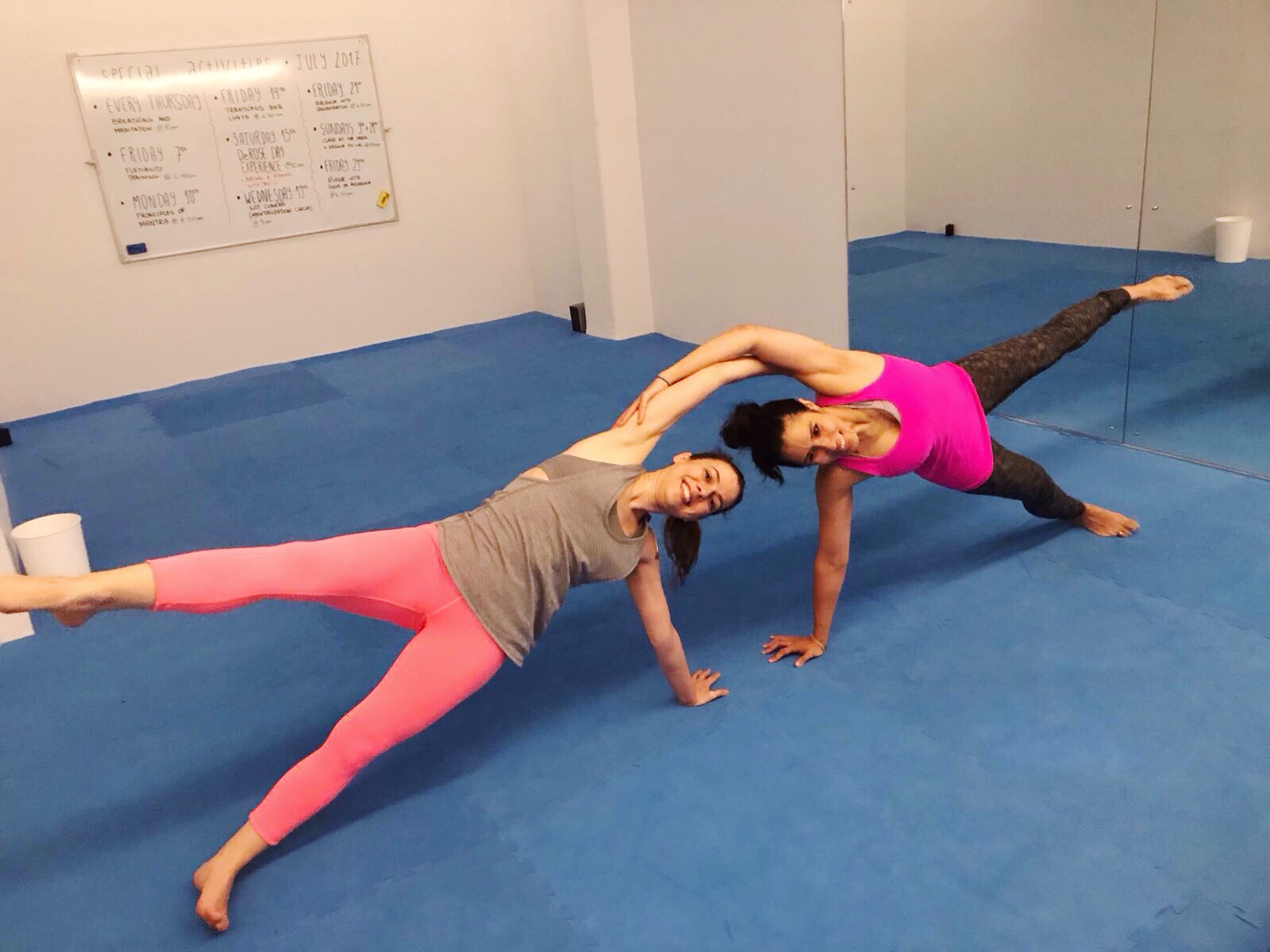 Partner fun in the session 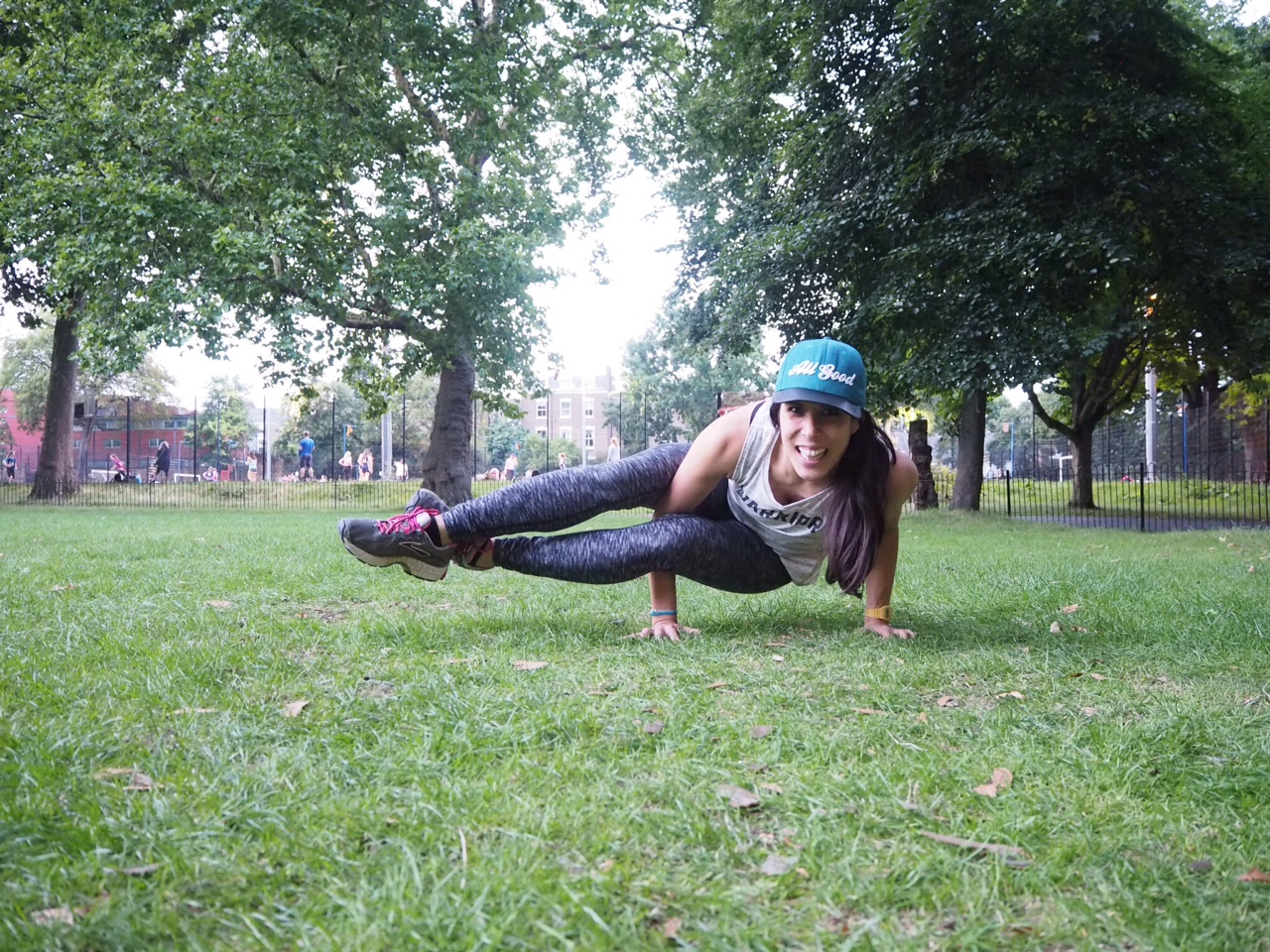 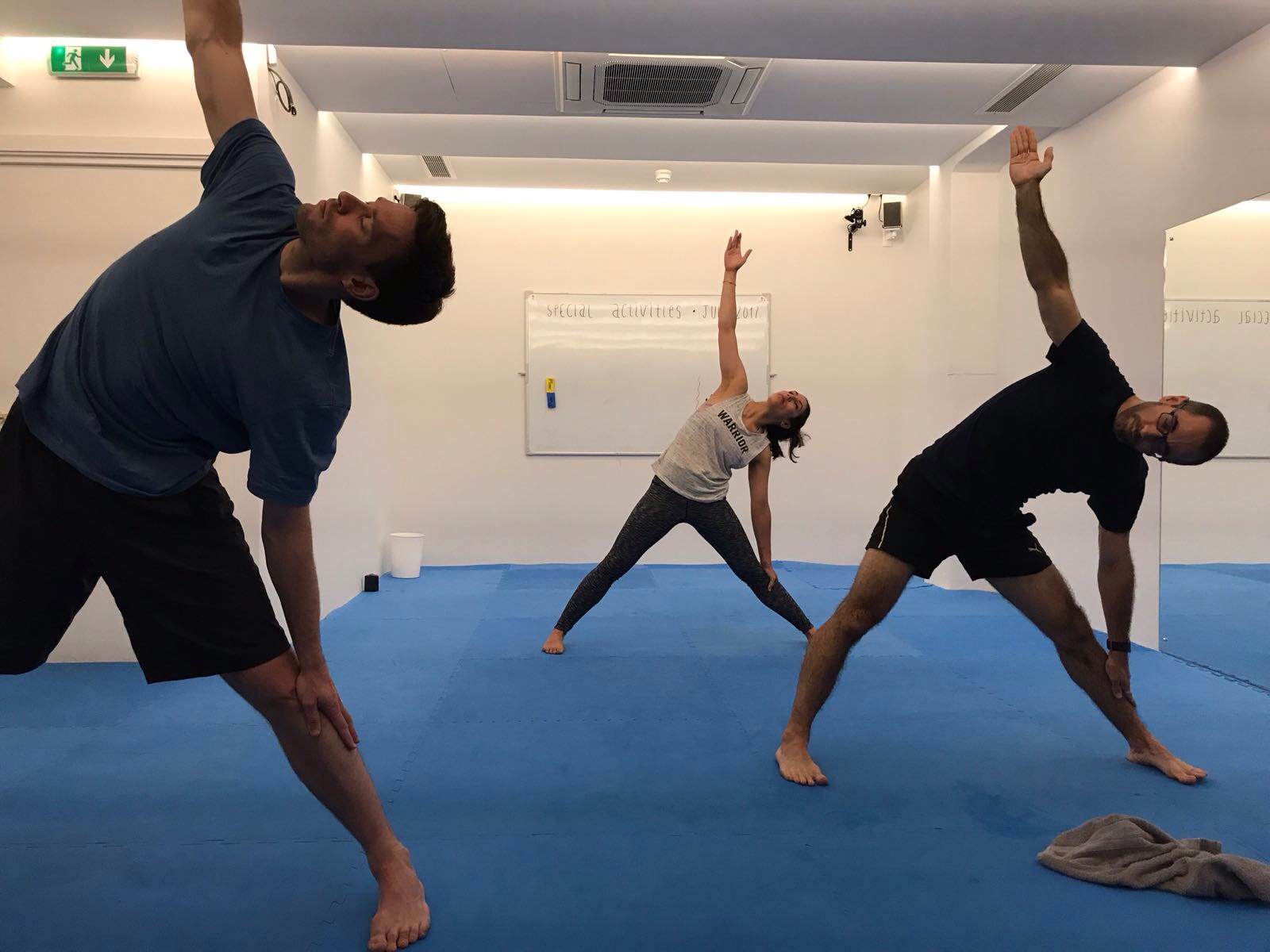 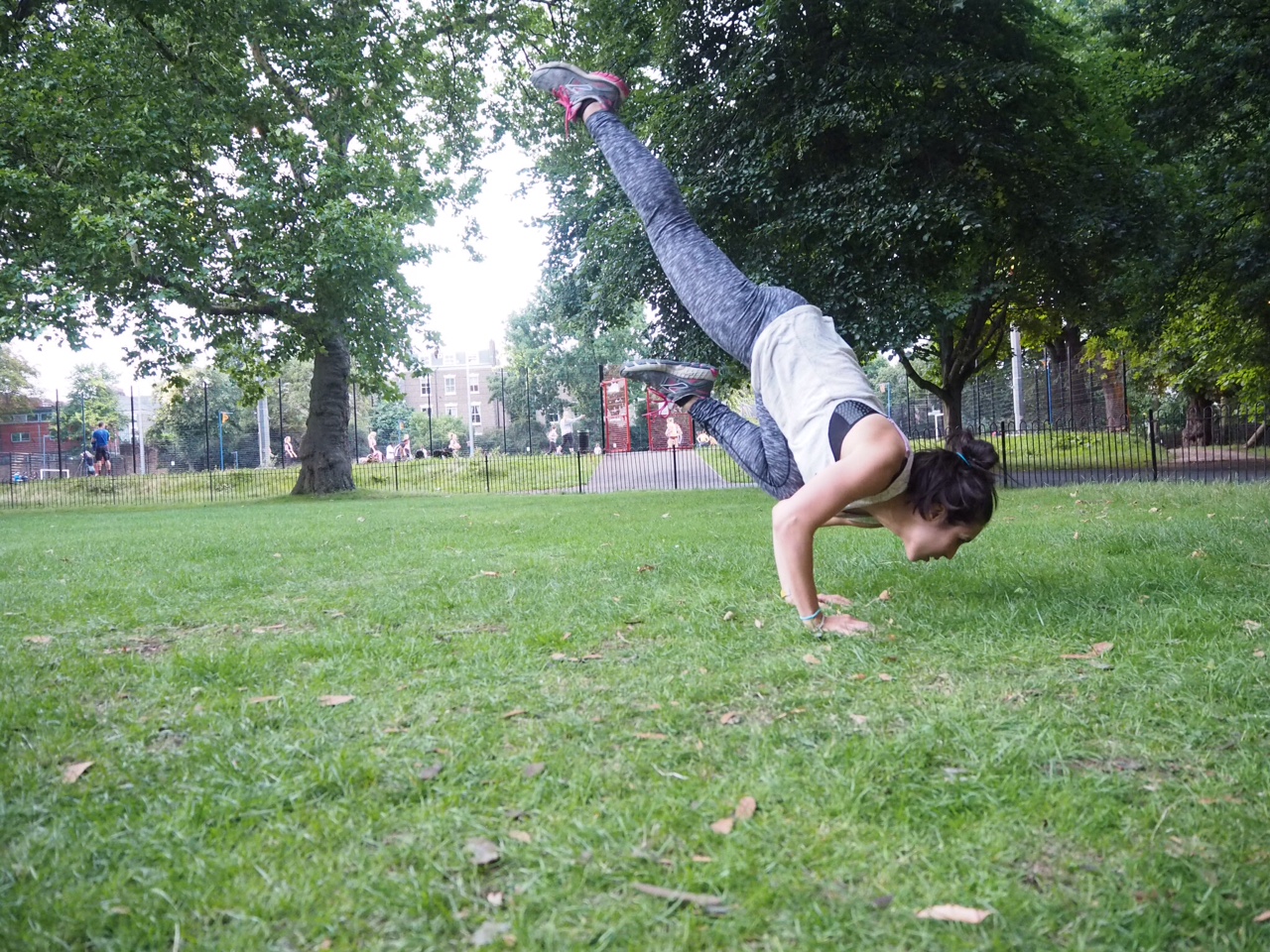 The flying crow again. Because I still can’t believe I can do it!

I now go to DeRose Method classes twice a week (I wish it were more!) Word is getting out about it and so I’ve noticed more people in classes (but never more than 6 so far, and often there’s only me or just a couple of us) but the quality and attention to teaching is still the same. They’ve even got more teachers which is fantastic as each teacher brings his or her own twist to the class. One thing I’d say which could be considered a con, is that it’s highly addictive. So much so, that I HATE missing classes. Seriously, it totally disrupts my week.

Book yourself a trial here: derosemethodsoho.co.uk