As someone who doesn’t drink coffee, nor drink builder’s tea, I’m always on the hunt for new hot drinks and when Dragonfly Teas popped through my letterbox, there’s nothing more exciting than seeing White Tea (my favourite) snuggled in with a box of Moroccan Mint, Skinny Dragon and Mountain Honeybush. 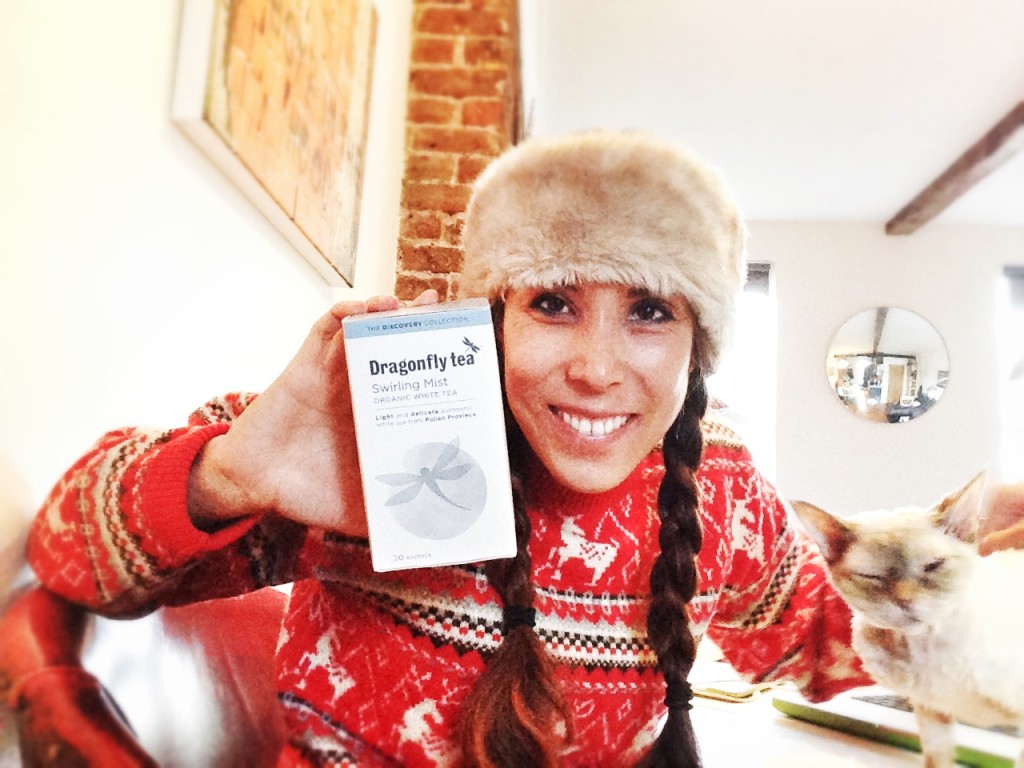 Getting quite excited about the White Tea. So is the cat.

Obviously, the first thing I tried was the Swirling Mist White Tea and it didn’t disappoint – it tastes like White Tea – light, aromatic and refreshing. It was so delicious that we even used it in our White Tea Chia Pudding with Lychee & Strawberries recipe.

The Moroccan Mint is not only inspired by Morocco’s tea drinking culture (it’s drunk in the morning, in the afternoon, at night, during meals, inbetween meals…) but the spearmint is also sourced from Morocco. It’s teamed with gunpowder green tea which mellows it out but still gives it a refreshing kick. For me, this was perfect after lunch, especially a heavy one.

The Skinny Tea is pure pu’er, which is basically a fermented dark tea. In the cup it looks dark brown, almost reddish and it smells a little like the smoked Lapsang souchong. It’s said to increase levels of good cholesterol, mainly because it contains small levels of lovastatin (normally used in prescription to lower cholesterol) thought to be a by-product of bacteria during the post-fermentation process. Taste-wise, this is one of those teas where the scent is stronger than the taste so don’t let that put you off. This is most commonly drunk after meals to aid digestion. 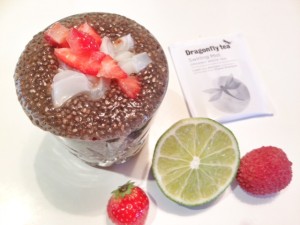 We liked the White Tea so much we made a chia pudding with it.

For anyone who’s not had Honeybush tea before (like me), it’s caffeine-free, smells like honey (how it gets its name from) and tastes a bit like rooibos. Dragonfly Tea’s honeybush comes from a remote, certified organic farm on South Africa’s coastal mountains.

The packaging feels like a visual representative of the teas – delicate, fresh and light. The specialty teas, like the ones we had, have individually wrapped tea bags so are perfect for popping into your bag if you’re working from home or are out and about. And best of all, the teas seem great value for money, without compromising on taste.

Where to buy: Shop online at www. dragonflytea.com or take a look at their stockists page.
How much? £2 for 40 tea bags of the Specialty Teas (this includes the ones reviewed)
Who’s it for? Anyone who loves beautiful teas.