At exactly 28 weeks into my second pregnancy, I decided that I would do a pregnancy yoga class. Sundays are known as ‘Daddy Sundays’, where I get most of the day to myself. I normally spend this hunkered down with my laptop, desperately trying to get all the things done I had promised myself I would earlier in the week. Yet today, I wanted to DO something, so I booked myself into Pregnancy Yoga at Frame in Shoreditch, which is part of their Mumhood offering. 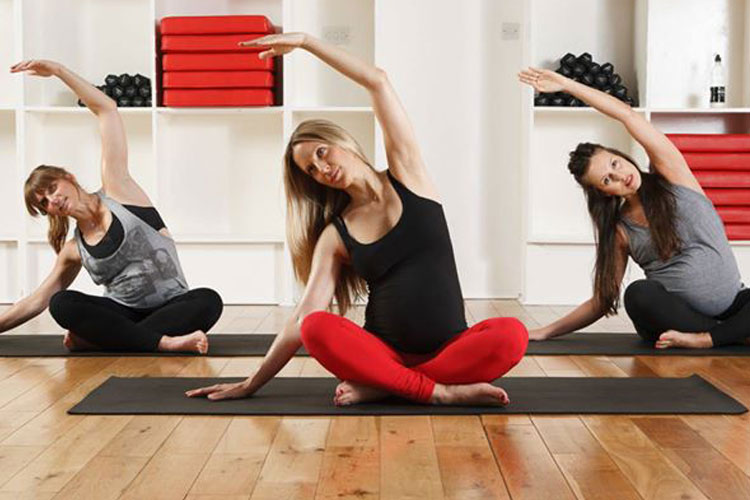 Honestly, I’m not that keen on pregnancy yoga classes. Mainly because I find them so different to my normal DeRose Method and other fitness classes. During my first pregnancy, I did a whole bunch of pregnancy yoga classes at the Life Centre in Islington; they were mainly based around floating your arms around, breathing and having a nap at the end. I went because, well, I wasn’t too sure what else to do and I’d also made a friend who went with me. Since then, approximately two years on, there seem to be more pregnancy fitness classes available and having worked with mums and babies as a personal trainer, would have no trouble putting together my own pregnancy workout. However, I wanted not to have to think and I’d had a busy week. This was just what I felt my body needed.

So I rocked up at Frame, ten minutes before the yoga class started (unusual for me, I’m normally at least ten minutes late for everything) and chilled out on my mat. I have a fondness for Frame – I’ve been going on and off ever since it first opened in Shoreditch and I love the area. There were five of us in the class, taken by Emma Greenough who also has a two year old of her own. I always find it comforting when the person taking your pre or post-natal class has children of their own. Pregnancy and birth is something which of course, is different for everyone, but only until you’ve been through it, can you somewhat understand the impact of carrying a ridiculous weight around on your body and the ‘interesting’ effect birth has on your body. For example, the weird way you turn into Bigfoot and shoes don’t fit anymore, or how annoying it is to only be able to lie on your side, or how much slower you walk, the horrid sensation of your ligaments stretching and how you go through a ‘fat’ stage before the bump properly appears.

The class started with introductions – our names, how many weeks we were along and how we were feeling. Several of the women there ranged between 7 and 11 weeks pregnant – , these were the rebels, the ones who had looked at the Frame advice that said it was suitable FROM 12 weeks onwards and booked themselves in anyway. I’m very much a ‘do as I say, not do as I do’ person so whilst I wouldn’t take on a pregnant PT client before 12 weeks, I did do a Tough Mudder at 7 weeks pregnant (I wouldn’t advise it…) However, people have to do what they feel ready for and as Emma said (she normally doesn’t train people unless they’re past 13 weeks pregnant), this class was going to be nice and gentle.

During the hour, we focused on a variety of breathing exercises to help calm and bring awareness to the body. Emma pointed out that even in the womb, babies respond to the mother’s breathing so this was a nice way to bond with the baby. We also incorporated some gentle stretches to warm up our muscles and to loosen tension in our back, shoulders and neck. We had a couple of gentle flows involving hip openers, chest openers and leg strength. There was an emphasis on being aware of ‘hugging your baby to you’ which also helps to re-align the spine and prevent additional pressure on the lower back. I particularly liked Emma’s use of mudras (hand gestures which represent different meanings, such as the Ganest mudra which signifies the ‘remover of obstacles’) and the goddess power stance.

Emma incorporated techniques in the yoga class which help you prepare for birth which is more important than I think is realised at the time. I had a natural birth and used breathing techniques taught at hypno-birthing to get me through it, but a lot of the movements and breathing we did in today’s class would also be beneficial. You just have to remember them!

Whilst I’d rather get to a fitness class than a pregnancy yoga class at this stage (whilst I still can!), I  see the benefits of it; pregnancy yoga gives you the chance to take a break from all the busyness of day to day life (which seems to get even more crazy the closer to your due date you get), reconnect your mind with your body and prepare you for a unique and tiring experience. I am positive that the further I get into my pregnancy, the less inclined I’m going to feel the need to strengthen and the more I will relish gentle time for myself and my bump. And it makes for the perfect lazy Sunday if you team it with a delicious brunch after!

Who’s it for: Pregnancy yoga at Frame is ideal for those who want some ‘me time’ before the birth, especially those who haven’t been very active prior to getting pregnant.
How much: £14 for a class
Where: Frame Shoreditch is at 29 New Inn Yard, London EC2A 3EY. Old Street is less than a ten minute walk and Shoreditch High Street overground is less than five minutes walk.
Website: moveyourframe.com