On a glorious Sunday morning, I reconnected with my inner child and had a little taste of what it’s like to navigate the urban jungle, traceur-style. Parkour royalty came out in force to celebrate the release of Disney’s The Jungle Book by showing city-folk like me how to unleash the Mowgli within and how to view their environment in a new and surprising way.

I love animals and, when I was little, I used to pretend to be one. In fact, you’d be more likely to see me scampering about on all-fours or hanging upside down half-way up a tree, than being right-way up like all the other ‘normal’ children. You can imagine what my poor parents had to deal with! They used to call me “Mowgli”, after the protagonist of one of my all-time favourite cartoons: The Jungle Book. Have you tried to crawl around on all fours recently? Yeah, it’s tough! How about swinging through the jungle on vines? Well, it’s a bit tricky to find conveniently placed sturdy vines in the city…

Unless you were at the Southbank last weekend, that is! 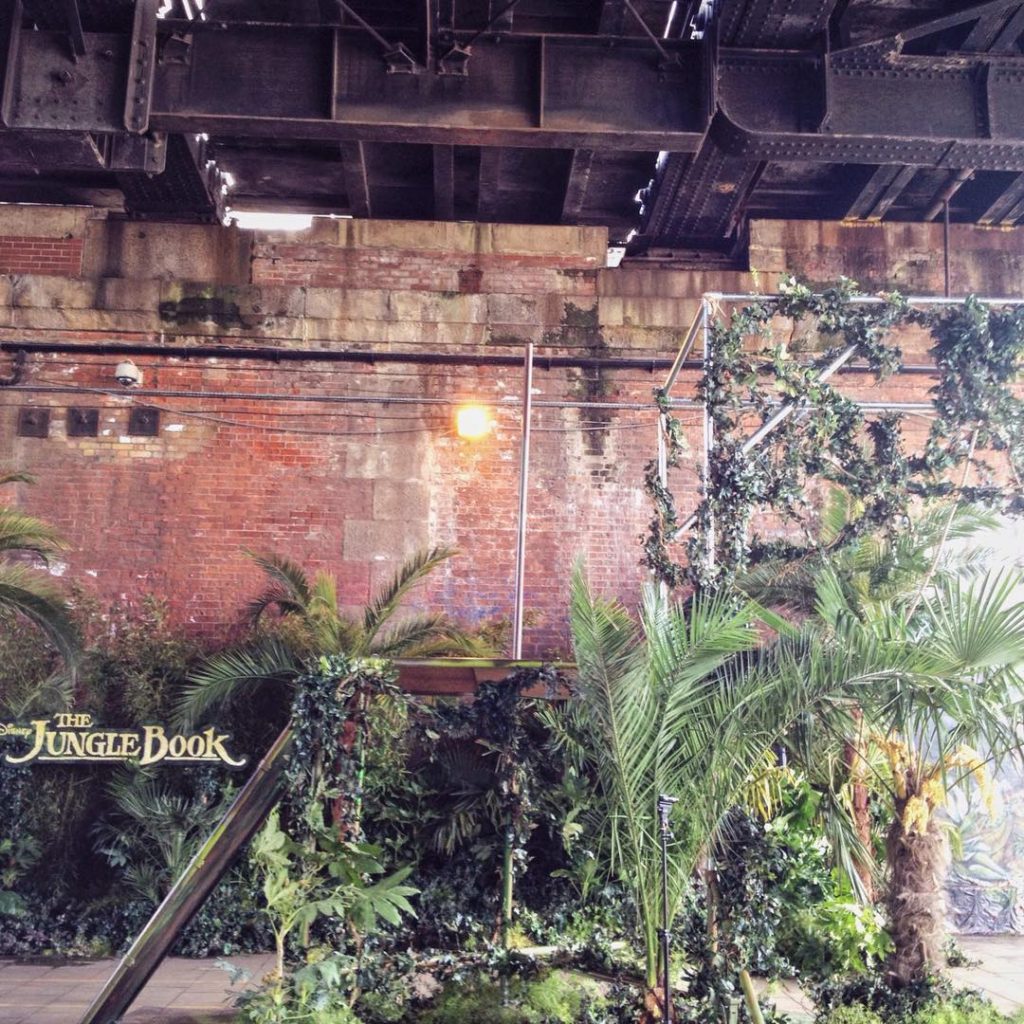 The urban jungle at the Southbank

To celebrate the release of The Jungle Book movie, a corner of the Southbank was turned into a veritable jungle, complete with palm trees, lianas, rocks and precipitous drops. The kid in me was giddy with excitement as I walked up to the Urban Jungle. This may also have had something to do with the fact that Timothy Shieff was there. You may recognise Tim as the last man standing in Ninja Warrior last year (check out the video of the final) and a finalist in this year’s series. If you watched the show, then you’ll know that Tim is a Parkour professional and two-time World Freerunning Champion! If Mowgli had been raised by wolves in the city, then his name would probably have been Tim Shieff.

I met Tim briefly, but he had to shoot off to do some filming (you can see the results in the video above), so I then jumped in to do some freerunning of my own. There were many Parkour pros around and they were taking visitors through a couple of mini-courses and showing them the ropes. I was chuffed to bits to be taken through one of the courses by Brad Wendes, elected director of Parkour UK, the National Governing Body for Parkour, and who you will most likely recognise as the head and founder of Team Kinetix, who made it to the semi-finals of Britain’s Got Talent back in 2007 (watch their jaw-dropping semi-finals act). This Urban Jungle was filled with Parkour royalty! It’s a miracle I didn’t do anything embarrassing! 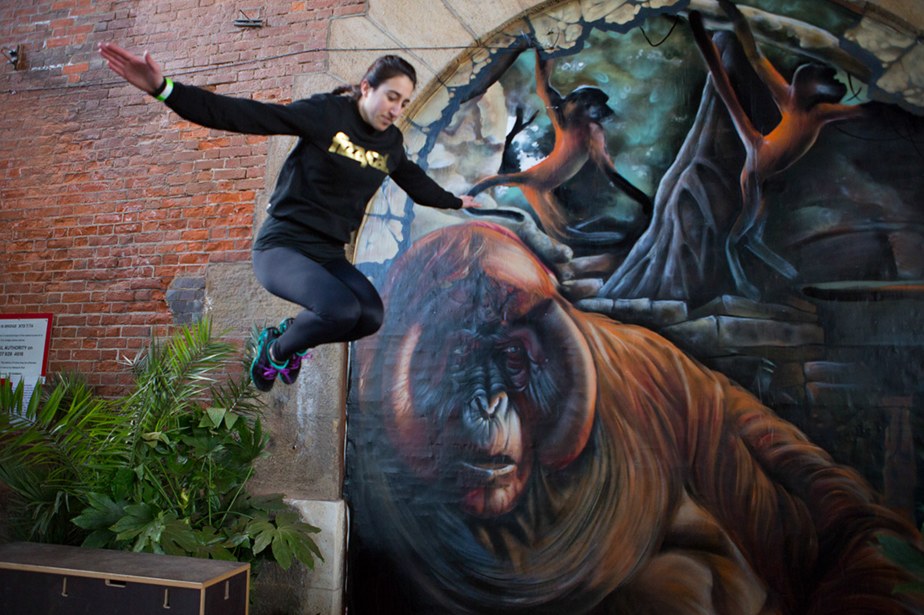 Hmm, maybe this was a little embarrassing…

The visitors were mostly families and young people who were out on a walk around the Southbank and who stumbled into the jungle. It was fantastic to see so many kids getting active and trying out this exciting sport! It was like The Jungle Book had been brought out of the dark movie theatre and into the open on a beautiful sunny day, ripe for kids (and the young-at-heart!) to, quite literally, immerse themselves in.These weren’t scaffolding beams we were balancing on half a foot off the ground, they were narrow tree trunks linking two banks of a torrential river. And the big wooden boxes? Fallen trees and massive boulders we had to negotiate on a chase through the jungle floor! So much fun! 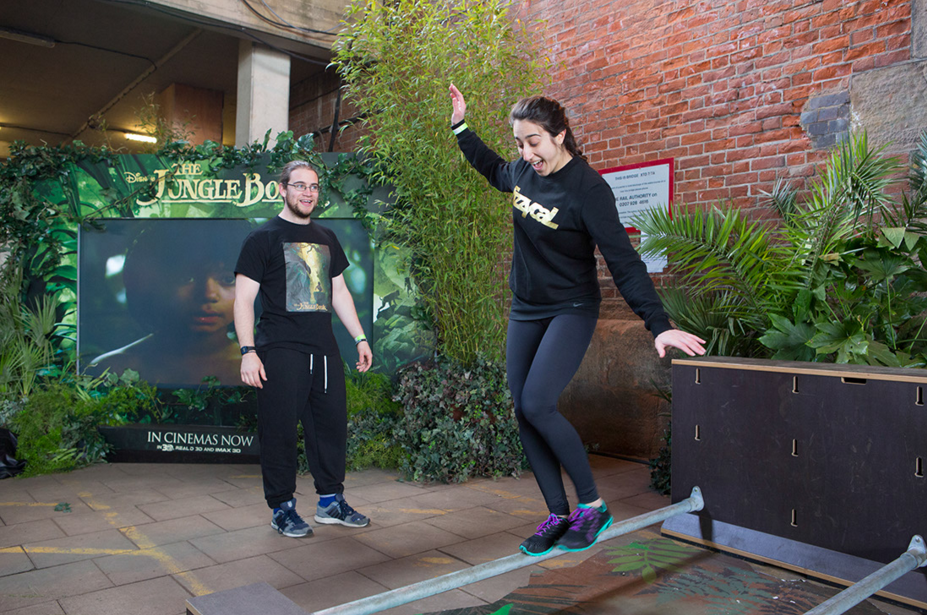 Don’t fall! There are crocodiles!

Parkour or freerunning practitioners are called ‘traceurs’ (French for ‘tracers’), because they trace a path. Essentially, Parkour is about getting from A to B in the more efficient way possible. You will have seen it done in films, like in Casino Royal, Prince of Persia: The Sands of Time, The Hunger Games and even Harry Potter and The Deathly Hallows. Traceurs run and as they do so they negotiate whatever obstacle or features are in their way to achieve a flow of continuous movement, often incorporating impressive stunts, mind-blowing balancing acts and jumping seemingly impossible distances. It’s mesmerising to watch and it gives you a fascinating new perspective on the urban landscape and features around you. Just like my imagination turned the Parkour courses at the Southbank into a real jungle, the traceur looks at a bollard, a staircase, a wall or a pillar, and views them not just as functional objects or surfaces, but as elements to interact with.

There’s a lot to be said for the traceur way to view your environment. There are no obstacles when freerunning. The whole idea is that movement is continuous. OK, so maybe you had to change the direction in which you were going, but your momentum continues, unabated. There are all kinds of life lessons and philosophies you could take from that! And the level of self-confidence and mental strength you need to perform some of the tricks and jumps you see freerunners do… Wow!

If, like me, you’re keen to investigate Parkour in more depth, then I’d encourage you to head to The Chainstore at Trinity Buoy Wharf near Canary wharf, home and training academy of Parkour Generations, the largest professional Parkour organisation in the UK. It’s a great space, with an indoor training zone that’s designed to mimic the outside environment, with scaffolding, concrete blocks and wooden beams arranged in an urban labyrinth ripe for the tracing, as well as a functional fitness and strength training gym that even hosts its own Crossfit box (Crossfit 1864), making me an extra-happy magpie! 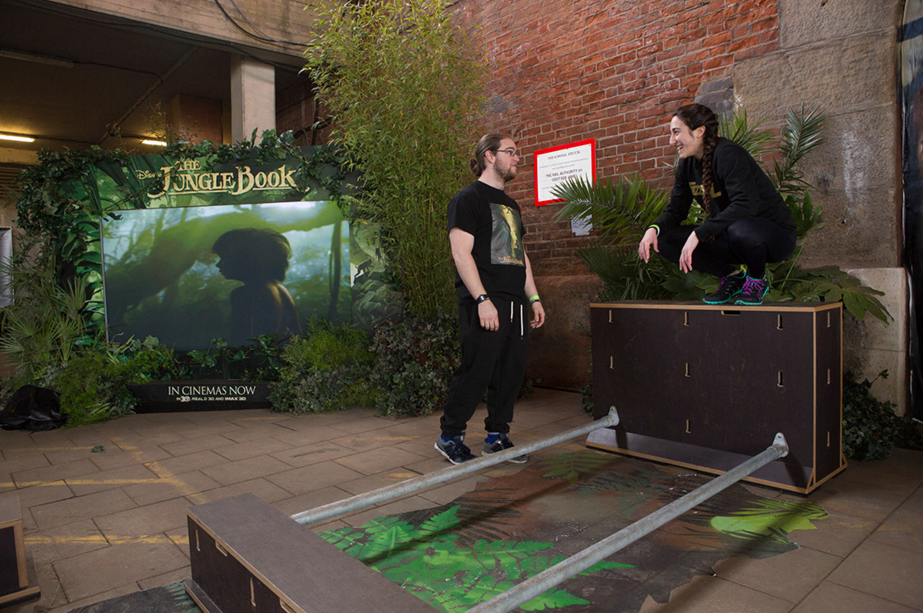 Getting coached on how to navigate the torrential river of my imagination.

And if all this sounds a little bit intimidating, allow me to reassure you: the pros at the Urban Jungle were encouraging and very supportive. They actually pointed me to She Can Trace, a women’s freerunning movement. There are regular weekly classes as well as informal monthly Sunday Parkour ‘jams’. I’m very excited about the upcoming Women’s International Parkour Weekend, a two day training event with some of the world’s best female coaches!
Will you join me?