Being a vegan of the early 2000s, when eating plant-based meant carrying around your own carton of soya milk and having to request the goat’s cheese salad without the goat’s cheese on a not irregular basis, I never cease to get excited about a new vegan range launching at a mainstream café, pub or restaurant. What’s more, having converted my husband to vegetarianism last January, and aware that as a relatively new convert his expectations are that bit higher than mine, I’m always on the lookout for new and delicious veggie options to help ensure he remains on the meat-free bandwagon. So when the opportunity arose to sample the new vegan range at the Greek restaurant, The Athenian, this week I jumped at the chance (and was able to drag my husband and baby along for good measure!). 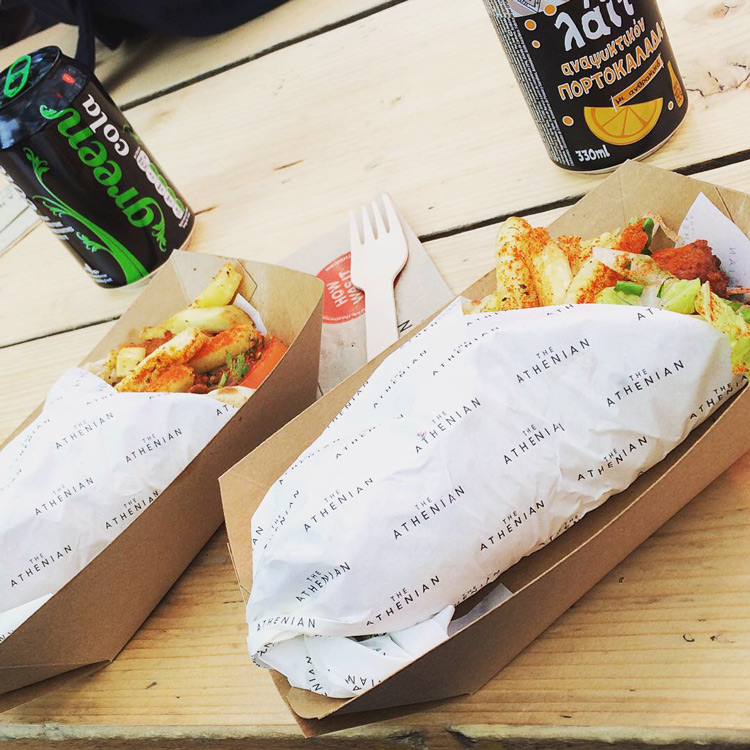 The gyros and souvlaki

Where can you find The Athenian?

There are branches of The Athenian in Victoria, White City, Tooting, Canary Wharf and Shoreditch, with a branch in Wembley due to open soon. We went to the Shoreditch store, which is located in the food hall of Box Park, just a minute’s walk from Shoreditch High Street station. Situated amongst a sea of delicious fast food outlets, there is plenty of competition for the lunchtime crowd, yet when we arrived the long queue outside suggested that this was a street food restaurant in high demand. The staff were really helpful and friendly and although we queued for 15 minutes and had to wait a further 10 for our food, it was worth the wait.

The meat-free menu included vegan souvlaki, made with either tomato croquettes or grilled mushrooms (priced at £5.40), and vegan gyros made with seitan (at £6.50). Both were served with vegan mayonnaise or a smoky aubergine dip, salad and oregano fries, and could be had either in a pitta wrap or (for an extra couple of pounds) in a box. There was also a ‘naked’ option for both, served with salad and without the pitta or fries. Vegan friendly sides included melitzanosalata – a vegan smoky aubergine dip with pitta – and Santorini herb and tomato croquettes (both £3.90). 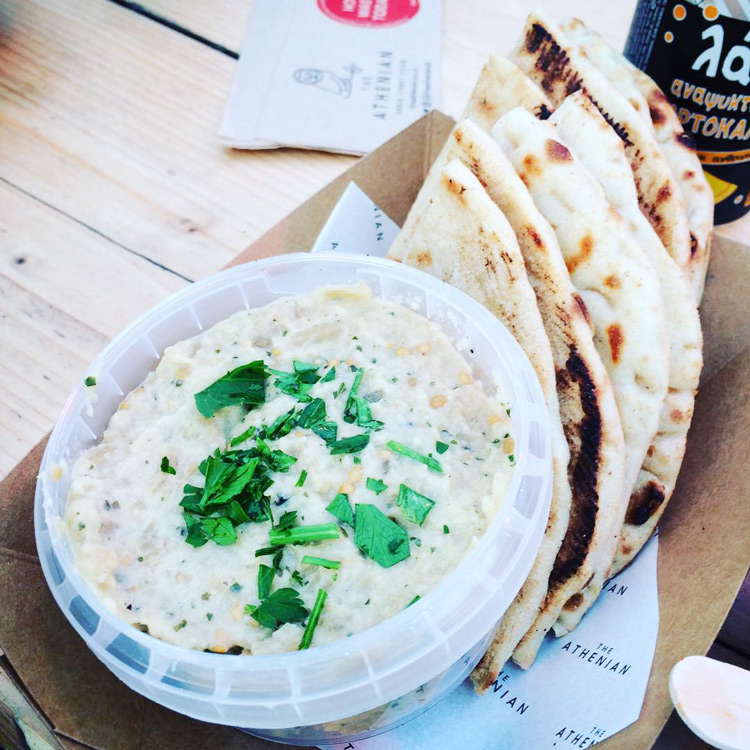 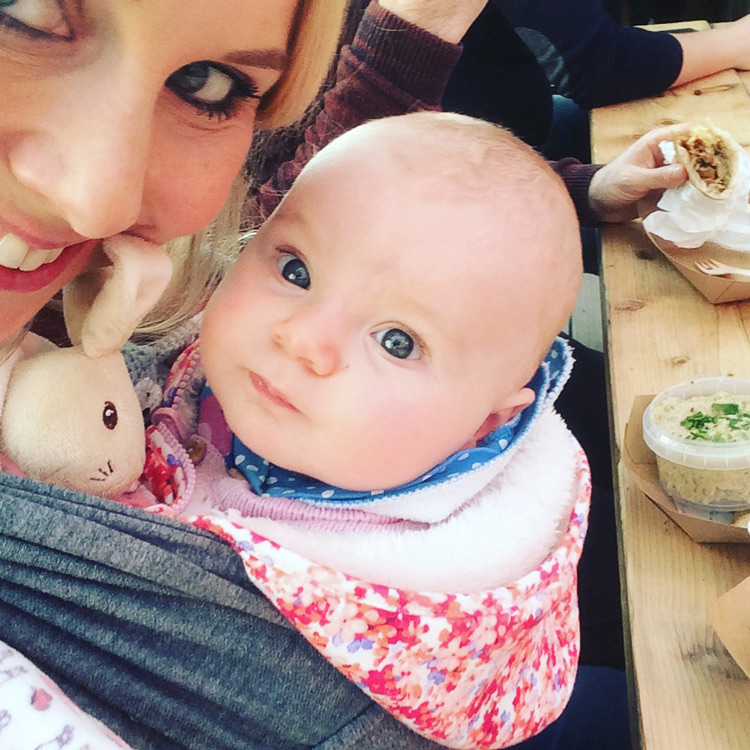 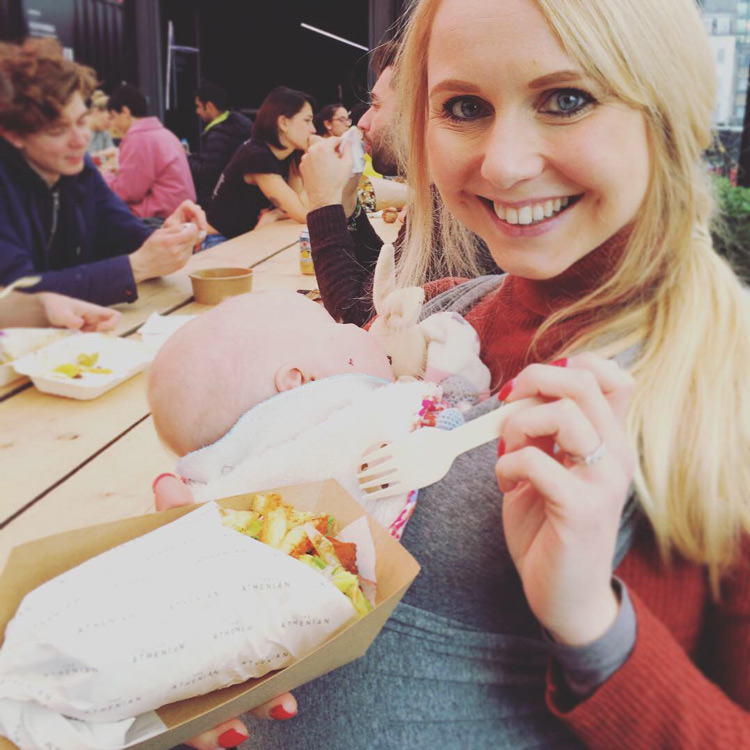 Lizzy and her gorgeous baby

I opted for the souvlaki wrap with croquettes and mayo, while my husband went for the gyros wrap with seitan and aubergine, and, for the purposes of a full report (and greediness) we shared some melitzanosalata on the side. Both wraps were really delicious – the croquettes were full of flavour and had a nice, light texture which worked well in the wrap and with the salad and mayo. The fries were a little overkill for me alongside the croquettes and the pitta, but then I’m not a big fan of chips and my husband begged to differ on this point! The seitan had a good ‘meaty’ texture, and as a fan of fake meat this suited my husband, and the aubergine dip complemented the flavour of the seitan and gave the wrap a lovely smoky flavour overall. The pitta was homemade and deliciously cakey, with a crispy outer layer and fluffy inside – the kind of pitta that puts any store-bought one to shame. The additional dip was also really tasty, although wholly unnecessary given how filling the wraps were! Still, we managed to polish most of it off without too much trouble.

One of the comments my husband often makes about veggie options is the tendency for restaurants to just sub in a meat-free ingredient, be it tofu, jackfruit, seitan etc., but to fail to adapt the other flavours of the dish to complement this different ingredient. This certainly wasn’t a complaint in this instance, in fact, the aubergine dip in particular worked really well with the seitan. This is perhaps testimony to the fact that The Athenian has devoted a lot of time and attention to the new meat-free range, which has apparently been in development since late 2017.

Any puritans out there may see vegan souvlaki as an oxymoron. Yet while the restaurant acknowledges that traditionally this is a meat-based dish, they are also keen to evolve and develop their cuisine, and have drawn inspiration from recent visits to Athens, where meat-free options are also on the rise. Moreover, while menu at The Athenian is largely inspired by traditional Greek flavours, they are, in their own words, ‘executed with contemporary tastes in mind’.

Overall this was a really tasty lunchtime treat and a great alternative to the usual hummus and falafel wrap I would normally go for. I will certainly be heading back for more! 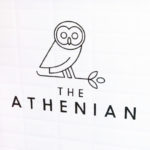 Who’s it for: The Athenian vegan menu will appeal to vegans and non-vegans alike. If you want a quick and easy meat-free lunch without compromising on flavour then this is the place for you!
How much: Wraps come in at between £5.50 and £6.90, boxes are between £7.40 and £8.40
Where is it: Branches are open in Victoria, White City, Tooting, Canary Wharf and Shoreditch.
More information: https://www.theathenian.co.uk

Lizzy is an editor and health and fitness writer. She grew up as a competitive swimmer and waterpolo player, trained as a lifeguard and swimming teacher, and is happiest when slightly chloriney! After moving to London she became a (mid-pack) runner and ran her first marathon in 2015. As a new mum she is currently working to see how compatible motherhood and marathon training really are! She is a vegan and is raising a plant-based baby girl.