Peloton is a technology company that allows the public to train live and on-demand with some of the world’s greatest fitness instructors in the comfort and convenience of their own home. It is arriving in Britain in September 2018. Using its revolutionary indoor bike, Peloton beams out 14 daily live – and 10,000+ on-demand – immersive cycling classes, so users can enjoy an intense spin class in their own home, on their own schedule. 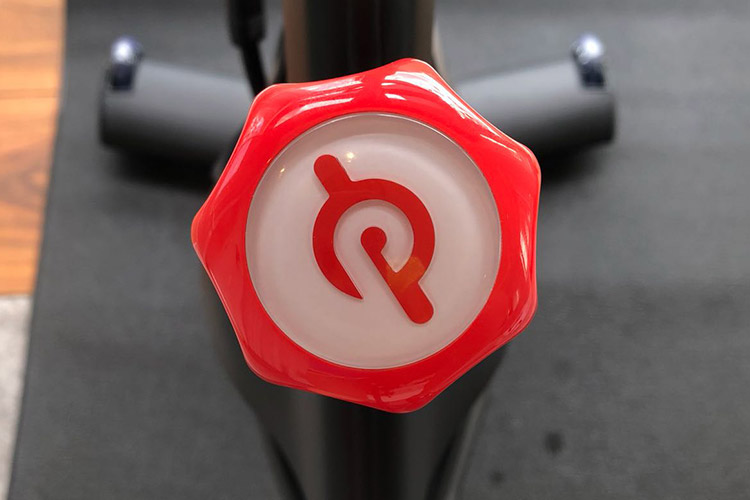 As a lapsed spin-fanatic, mother of one delightful but demanding toddler and trying to set up a business at the same time, the Peloton concept appealed to me immediately. You purchase your Peloton bike and for a monthly subscription you get access to 8,000+ live and on-demand classes to sweat-it out to at home.

So when Peloton invited me to the luxurious penthouse of Canaletto Towers in EC1 to test out their bike I was excited. Upon arrival I was whisked into one of the bedrooms (not like that!) by Warren, one of Peloton’s UK gurus, and shown the bike. Sleek and black, with a 22” touchscreen and simple twist knob for increasing or decreasing resistance, it looked good. It was also interesting to see the bike in a “home” setting (albeit a luxury suite on floor 29 with extensive views over the city), which gave an idea of its size and aesthetics. At 135 pounds and with a footprint of 4ft x 2ft, the neat design didn’t dominate the room and could easily be slid to one side when not in use. While I wouldn’t want it in the centre of my living room, I wouldn’t feel the need to relegate it to the loft to become a glorified clothes horse, as is the fate of so many home-exercise bikes.

Warren explained that using the touchscreen I could select any number of on-demand classes – searching by instructor, ride type, music genre, class length and whether I wanted to use arm weights or not. There were also a number of “Beyond the Ride” workouts; off-bike content including strength, stretching and cardio workouts. They also get celebrity and elite athletes to instruct classes, which is a fun bonus.

As a child of the eighties I opted to select by music genre, choosing ‘70s/’80s rock and not using arm weights. Fortunately, Warren was completely on the same wavelength and suggested I try a 30-minute, ‘80s rock ride overseen by Matt Wilpers, a regular Peloton coach who also trains elite athletes.

He then helped me to set-up the bike – in exactly the same way you would before a spin class, adjusting the height of the saddle and its distance from the handle bars. After the initial debate I had with the bike about getting on – caused by user error since I had never used cleats before! – I was ready to go. I clamped on the headphones, cranked up the volume and hit start. The class briefly buffered on screen and then started almost immediately. Matt, a good-looking and friendly instructor, gave a brief overview of what we would be doing in the next 30 minutes and how to get the most from the ride with our technique, and then we were off.

The bike measures your output onscreen using three metrics: cadence (speed), resistance and output (power in KJ). These are also the indicators you use to set your speed and resistance as per the instructor’s directions. So, during the warm up we were told to have our cadence between 65 and 75 rotations per minute and resistance between 35 and 45. Obviously this is just a guideline, so people who are newer to spinning would probably go for less than this, and those who are old pros, and probably very fit, would go higher. I hadn’t done a spin class for 3 years so started by easing myself in gently at the lower end of the guidelines but soon settled in and cranked it up a bit.

This is definitely a workout where you get out what you put in, so if you really want to sweat you can – but equally on those days when you’re not feeling it so much you can dial it back. The main body of the class was really fun and certainly got my heart rate up and the blood pumping. For me, the sign of a good spin class is when I can see the sweat pouring off and I need to give the bike a wipe down after and this was certainly the case.

The guidance given by Matt was also really useful as a benchmark and he frequently increased and decreased both metrics throughout the class, really mixing it up to torch calories. We also spent a good deal of time out of the saddle doing hills and sprinting in the saddle, all of which kept the ride interesting. Matt was also good at reminding the class about their technique and posture, keeping weight out of the hands and a long body, all of which helped when my technique went to pot because I was so exhausted.

The final warm down was brief, but must have worked because I wasn’t totally crippled over the subsequent days. However, had I had more time with the bike, I would have done the “Beyond the Ride” stretching video recommended by Matt at the end of the class.

Following an inelegant dismount from the bike (again, my cleat game needs practise) I felt just as I would post gym spin class. I was sweaty, bright red in the face and had so many endorphins flooding around my body that I had a buzz that lasted the next 24 hours. 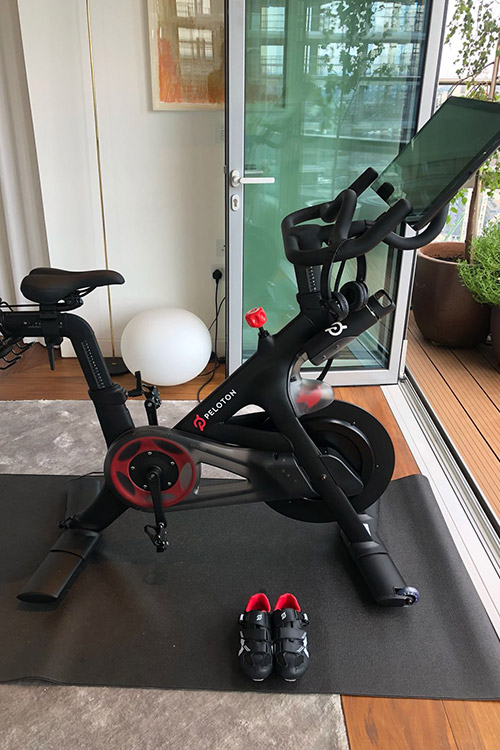 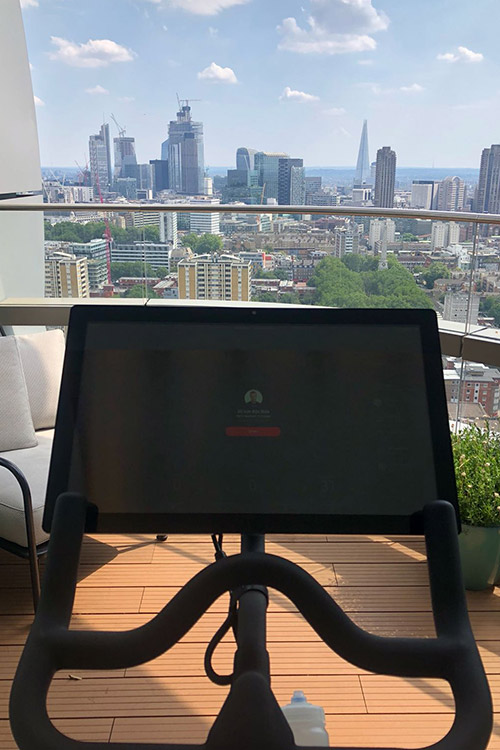 The screen then breaks down your distance, calories burnt and total output. During the class you can also see how you fare on the leader board, which pits you against other people doing the class – fun motivation to push yourself that bit harder. If you are able to do a live class, which I wasn’t at the right time for, the instructor will often give people a shout out, which is another fun interaction to be had when you’re sweating it out on your own at home.

Each bike can have multiple accounts set up on it so that you, your family and friends can all keep track of how you are getting on and see improvements. It also means that if you happen to be away from home but are somewhere with a Peloton bike, you can log in and keep all your rides recorded.  This is a great feature, as is being able to share your bike with people, which brings down the cost and suddenly makes the outlay a bit more justifiable. 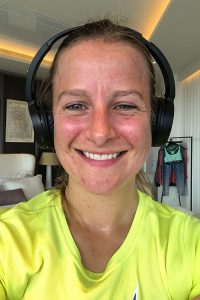 Does a workout even count if you don’t get a sweaty selfie..?

Many people purchase gym equipment to use at home and it ends up never being used. The unique thing about Peloton is that it is just like doing a spin class in the comfort of your own home. There is no pressure to get your bike set up quickly, no embarrassment over how revolting you look 5 minutes in and no pressure to keep up with everyone else. With class options ranging from 5 minutes to 120 minutes, it really is possible to fit in exercise provided you have the motivation to do it. I guess that that is part of the issue with Peloton, you have to be motivated to get on and do the class, no one is going to do it for you. While paying out for the monthly fee may be a certain driver, we all know how often we join a gym, only to stop going after the initial excitement.

If you love spinning but don’t have the time to get to the gym or classes don’t run at the right times, then this may very well be the answer to your prayers. If, however, you are the kind of person who gets swept up in the moment and loves a fad, then this could be a very expensive clothes-horse. For me, as someone who dislikes running but can still summon up the energy to go a few times a week, this is the dream. The buzz I had for 24 hours from doing the class was unbelievable. Now I just need to convince my husband that is a great investment and that we totally have the space for it in our spare room…

Who’s it for? Time-pressed people, who love spin but can never make it to the gym for spin classes.
How much is it? £1995 + £39.50/month subscription for unlimited classes (in comparison, a top of the range exercise bike could set you back up to £1000 and doesn’t offer any of the classes) which includes cycling, as well as “beyond the ride” workouts such as stretching and yoga. This cost can be can be shared by a house hold (1.7 per Peloton in the US) and the average member takes 9.5 rides per month
Where to buy? Customers in the UK can register their interest to be first in line for deliveries or just to receive further information on timing and launch plans at www.onepeloton.com

Peloton will be offering exclusive trials ahead of launch, for your chance to be one of the first to ride, sign up at www.onepeloton.com

Sophie has always had an active life, growing up eventing horses and fencing; nowadays she is more likely to be found on a mountain ski instructing, playing hockey at her local Club or tennis up on Highbury Fields. Up until the birth of her daughter in 2017, Sophie worked in the Sports Industry for companies including Arsenal F.C. and the M.C.C. Now she looks after her daughter alongside starting her own business, Sleep Thief Ltd, a sustainable, organic childrenswear company, bringing innovation to the market to make parents’ lives simpler. Follow her on Instagram at @sophievswallow and @sleepthiefbaby and at www.sleepthiefbaby.com