We sent Leyla, Co-Founder of Pretty Athletic (sports skincare brand) to Clapham to test out her jabs and hooks at a SW4 Fitness Boxing class. Did she pack a good punch? Read on to find out…

SW4 Fitness teach boxing classes in and around Clapham. Their classes are designed to give you a great workout, teach you self-defence and ensure you have fun in the process.  I decided to check out their Monday evening boxing class at 7pm which was held at private gym Fybre Fitness Hub off the Northcote Road in Battersea. However, as summer is now approaching all their classes will be held outdoors on Clapham Common (sounds like a sensible idea to me!)

SW4 Fitness was founded by fitness and sports enthusiasts Chris Boado and Paul Finch. The boxing class is led by Chris who is one of the most respected and qualified Martial Arts instructors in the UK, and who competes nationally in Tae Kwon Do and Kickboxing.

I would definitely recommend it to those who are looking for a fun, new way to stay or get fit.

As someone who loves running but also loves trying out new classes to keep things interesting (and stop me getting injured), I jumped at the chance to try SW4 Fitness’ boxing class which is conveniently located very close to home.

I turned up a little early and introduced myself to Chris and Paul, who both proved to be friendly and welcoming. They asked what my boxing experience was (basically, none) and explained how the format of the class works. The class is led by Chris, although both Chris and Paul keep an eye on the class for the duration of the session to ensure that everyone is carrying out the exercises correctly. There were about 20 people in the class, with slightly more girls than guys. 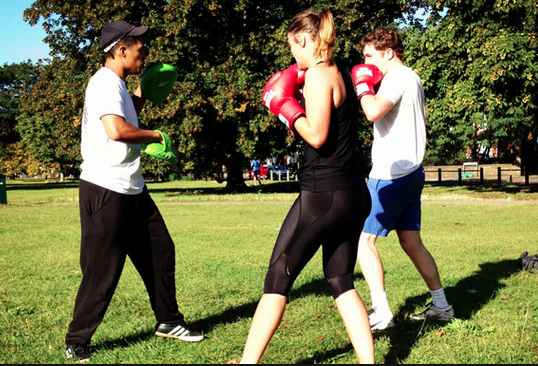 The class started with warm up exercises, including lunges and squats. Once we were sufficiently warmed up, Chris demonstrated the boxing stance (which depends on whether you are left handed or right handed) and some basic moves. We then put it into practice, punching into the air in front of the mirrors, with Chris reminding us to move the hips and keep your hands close to your face. We implemented a basic boxing sequence which we repeated as Chris counted – which got increasingly faster, and proved to be really fun! A few sips of water later and it was time for various plank exercise and push ups (less fun). We then went back to the boxing moves, again followed by some more lunges and crunches.

It was then time to put the boxing gloves on. There are plenty of boxing gloves and pads available to use, although some of the class brought their own. We were paired up, with my partner being another newcomer. One partner wore the boxing gloves with the other holding pads.

Chris instructed us to throw 2 punches, then 4, then 6 and so on until he reached 20, and then he counted back down to 2. I found the pace to be quite fast, but at the same time fun and enjoyable. We then switched with our partner, so they had a turn to punch the pads. Once that was done, what next? Yep you guessed it, lunges, crunches and push-ups. Once those had been completed (or at least attempted) for the requisite time, we then put the gloves back on. Chris demonstrated some boxing combinations, with modifications for us newcomers, which we then carried out. Paul was also on hand to check we were doing the moves and holding the pads correctly. Following this there were some more planks and crunches (naturally) and then back to the boxing with some particularly tiring speed punches (including sitting on the floor and punching upwards for a minute). A brief cool down then followed.

The hour just flew by – the first time I looked at the clock during the class was just 5 minutes before it ended. Chris really mixes things up and there’s no time to get bored! Happy to report that the following day my abs and arms were sore (always the sign of a good workout).  Most importantly, the class was really fun and I felt super energised afterwards. I would definitely recommend it to those who are looking for a fun, new way to stay or get fit.

For more info and to book a class, go to http://sw4fitness.com