As a self-confessed magpie of all things fitness, I often find myself in somewhat surprising situations, usually because I said ‘Yes!’ to a class without bothering to do any research or read the fine-print. As I stepped on to the mat at The Budokwai Martial Arts Club in Chelsea on a Monday lunchtime, it had just dawned on me that this was one of those situations. 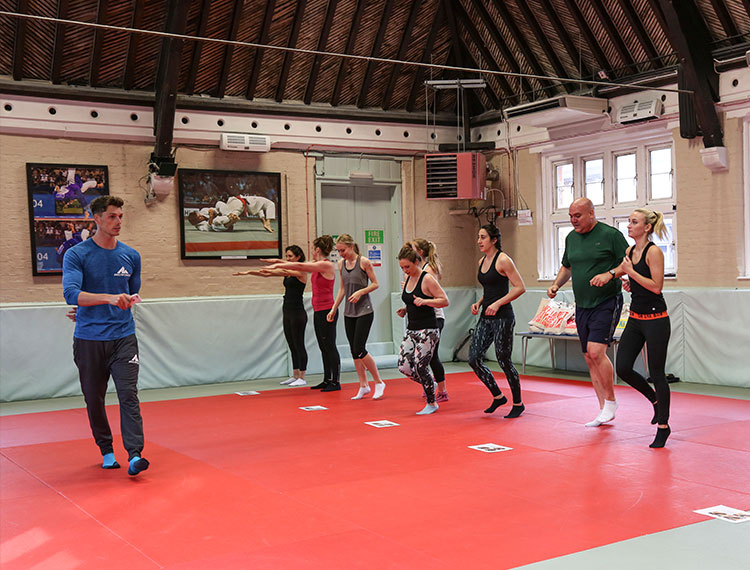 I was at a dojo at the inaugural class of the brand new Tonan Bootcamp. Tiffany, the class organiser was vaguely familiar, but I’d never met her before. There were professional photographers about. The goody bags I could spy in the corner of the room looked extra luxurious. I couldn’t quite put my finger on it, but there was definitely something up and I was quite possibly the only one who wasn’t in on it.

Well hey-ho I’m here to sweat so we may as well get on with it! Tighten pony-tail time!

The trainer, a tall, lean and rather beautiful man called Lonan, began by explaining the structure of the bootcamp. A series of cards were laid out across the length of the studio floor, each with an illustrated description of a familiar body-weight exercise. In pairs, we would move from one station to the next, spending one minute at each. We would repeat the sequence once more, and then do two rounds of a second, more challenging set of exercises. Half way through each set, we got a water break and a brief stretch.

We got a chance to look at all the different exercises in advance while Lonan demonstrated them for us and answered any questions, before taking us through a fast-paced warm-up routine. Once we were all warmed up, Lonan set up his stopwatch and bootcamp was go! The set of exercises was really well rounded, covering all parts of the body, and for each we could choose between a scaled and more advanced version. They ranged from the innocent-looking ones that creep up on you half way through the interval (zombie arm pulses, I’m looking at you!), to the solid foundation ones like push-ups and squats.

Lonan was a really attentive instructor, and he would move around the class giving feedback to every bootcamper. I was actually pretty impressed, because he gave alternative exercises when it wasn’t possible to correct for form. In a fast-paced class like this one, it must be all too easy for the instructor to miss poor form, and pretty impossible to correct in the space of a few seconds if the initial cues don’t do the trick. He even called me out for bouncing at the bottom of my squats, which (although efficient) is not a good idea for my knees. So big respect to Lonan for putting safety first!

I enjoyed the fact that we were working out in a dojo with a cushioned floor. You can really appreciate the reduced impact when you’re doing jumping lunges and squat jumps, as well as during the ab exercises! As you can imagine, by the end of the class, I was in a puddle of sweat and my arms and legs were burning, so the thorough stretch that Lonan took us through to finish off was very welcome. 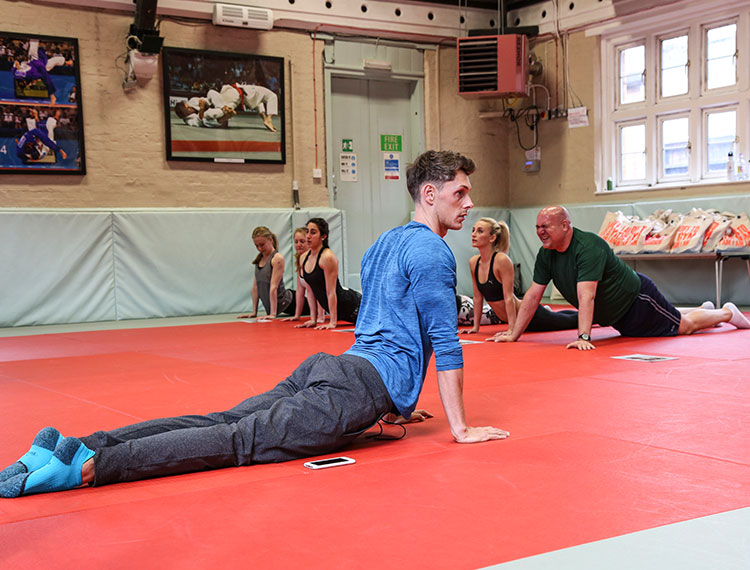 After the cool down, Tiffany and Lonan handed out the amazing goody bags I had my eye on from the beginning of the class. The bag itself was by Hey! Holla, which was awesome enough, as I’ve wanted one for ages! And the contents? Not one but two, Cuckoo bircher muesli pots, a cold-pressed Imbibery green juice, a full size carton of Lucy Bee lucuma powder, a resealable can of sparkling CanO Water, two packs of Urban Fruit, a Rhythm 108 good-for-you desert bar, one day’s worth of Vitl supplements, an entire jar of Pip & Nut coconut almond butter, and finally, a sample of chocolate flavoured pure whey protein powder by Multipower, who sponsor Lonan and Tonan Bootcamp. So. Many. Noms! 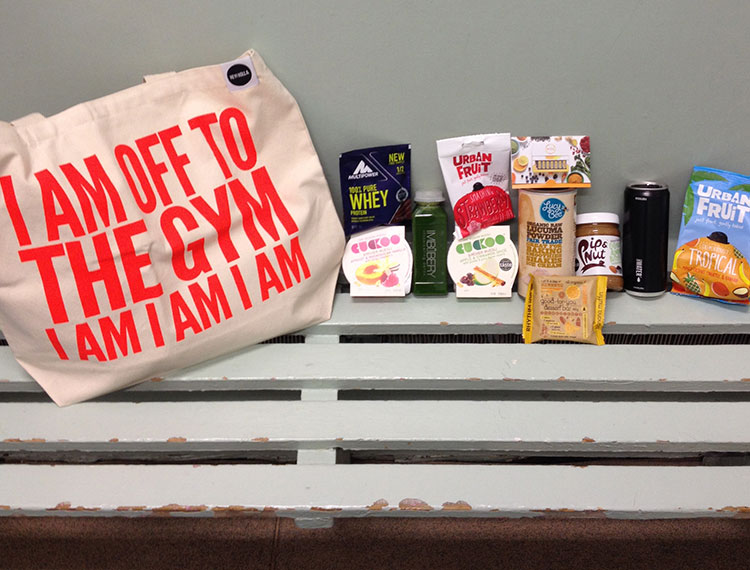 After the class, I went to chat with Lonan and also with Tiffany, who had been sweating along with the rest of us. So, it turns out the reason Tiffany was familiar is because she’s Tiffany Watson of Made in Chelsea and TiffanyWatson.co.uk. And Lonan is the Made in Chelsea PT! Oops! No wonder I spent the entire class doing double takes on these two! Well, I can only hope that they found my cluelessness refreshing (rather than insulting) 🙊🙈

“We saw a gap in the market for a decent Bootcamp run in Chelsea,” they told me, “and who better to host it than some Chelsea residents who know and love the area?! We both are into our training. Lonan is one of the most qualified personal trainers in London and Tiffany one of the most followed faces of fitness in the city!” Lonan has a long history in sport and fitness and a strong interest in good movement patterns and rehabilitation, because of old injuries, so his clients and Tonan Bootcampers should be confident they are in capable hands. Tiffany is herself on the way to becoming a PT, a she is doing her qualification alongside filming for Made in Chelsea.

All in all, I thought Tonan Bootcamp was a great bodyweight interval class and I thoroughly enjoyed it. The beautiful venue was an added bonus! The Budokwai (translates as “Society of the Martial Way”) is actually the oldest Japanese martial arts club in Europe, founded in 1918, and it is a stunning place to get your sweat on! 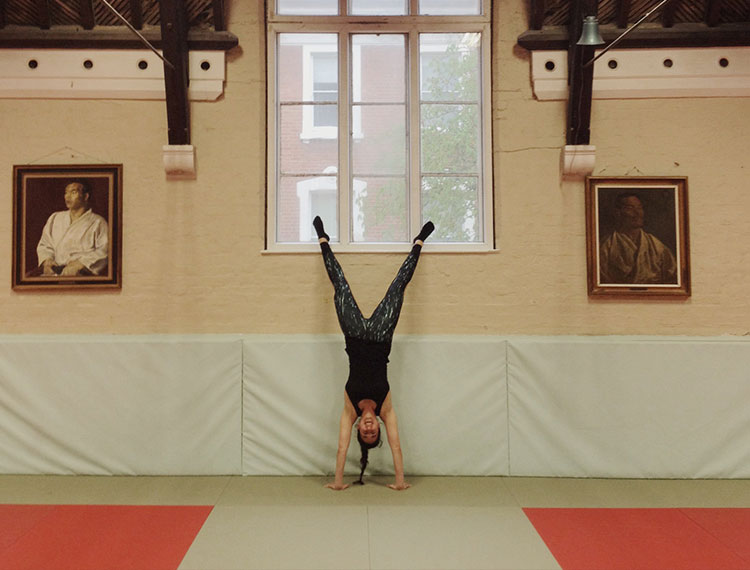 Even after all the hardwork, Christina still had enough energy to get her handstand on!

Who’s it for: Men and women who want to HIIT!
How much: £15
Where is it: Every Monday at 12:45pm at The Budokwai, 4 Gilston Road, London, SW10 9SL
More information: www.lonanfit.com