First released in 2007, Veganomicon has gained almost a Cult following. Hailed as a Bible for Vegan Cookery, this new version boasts over 250 recipes, which is more developed after a ‘Decade of Vegression’. The author’s love for ‘Pop Culture and Blatantly Urban Aesthetics’ is obvious in the choice of dishes, many of which seem to spring from an urban upbringing. 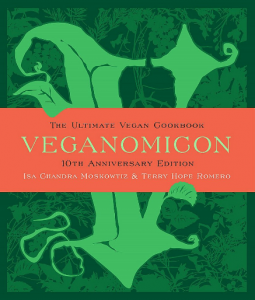 However, the concept behind Veganomicon, is not to appeal solely to Vegans. It aims to encompass anyone looking to eliminate meat and animal products from their diet one meal at a time. Quintessentially the stress is that ‘Vegan food is Normal Food’ but it can be extraordinary. The emphasis is on innovation and exploration, encouraging readers to expand and experiment upon the recipes within.

The book takes a very informal tone, with recipes beginning with a chatty colloquial introduction. This appealed as the light hearted tone sets the scene for cooking with ease without fear that the end result might not be perfect.

The book begins with an extensive introduction. Pages of information regarding the ethos of the book, Stocking the Veganomicon Pantry, Kitchen Equipment, Cooking & Prepping Terminology, How to Cook a Vegetable, Grain and Bean were extensive and perhaps a little long winded. I found myself skim reading through the majority of this section but this could be because I am familiar with these techniques already.

The book is laid out into a whopping 13 sections ranging from Snacks & Appetizers, through Sammiches (?), One Pot Meals and Desserts. You must bear in mind that this book is by American authors and as such you need to get your head around some of the language and terminology before you begin (arugula anyone?). 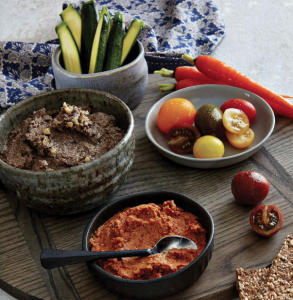 It started well, dishes such as Broccoli-Millet Croquettes and Chestnut Lentil Pate, set the tone for the book which focuses on making vegan recipes that are actually healthy, reducing the need for the addition of unnecessary fats and promoting the use of ancient grains.

However, by the time I reached the Salads & Dressings section, I was beginning to feel a bit bamboozled by the sheer quantity of recipes and the similarity between so many of them. In fact, after reading through The Casseroles and One Pot Meals Sections, I defy anyone to come up with a novel Squash recipe that they haven’t covered (I certainly know what to do with a squash when Riverford delivers one…….)

Cookies & Bars and Desserts offered a few new ideas and it was great to have vegan versions of non-vegan staples such as Biscotti and Custard Pie which I created to great effect.

Quantities are accurate but given in US Cups so you need to either have these or be able to convert them. The food Photography is average, not that enticing and almost covered in a yellow haze, which could just be emanating from the sheer quantity of Squash and Pumpkin recipes contained within. With the sheer quantity of recipes, it is obvious that there is not a photo to depict the end product of each and sometimes I was left unsure as to what the final plate should ideally look like. But this is just a small factor and I guess it’s up to you how you want to present your dishes.

I think it’s apparent that I was initially super excited when I received this book. I thought it was the answer to all my vegan prayers, never needing to buy another book of vegan cookery again. The reality is that whilst it IS good, it’s not great. I think it’s a case of ‘less is more’ and it would be better either as a series of individual books each with a specific focus, or a more concise version that possibly only has one or two recipes to highlight each vegetable or grain.

Would I buy it again?

That’s a tough question. While I will dip in and out of it for ideas, none of the recipes are really any that I couldn’t just google on the internet. But then my addiction is buying cookbooks…. If you only want to buy one vegan cookbook then this is the one as it covers pretty much every occasion that you could possibly need to cater for.

Veganomicon, hardcover, is available from Amazon for £29.

This post contains affiliate links. This website is run on the love of going to events, trying out new healthy stuff and eating delicious food. We don’t accept payment for reviews so we can write whatever we want and any money that we make from affiliates goes towards keeping this website going so please support us!