On 16th September, Hannah, Lucinda, Rosie and I, along with the support of Hannah’s boyfriend Ed (does anyone else’s other halves go to support them in such activities? I think I need to have words with my husband!) travelled to Holmbush Farm in West Sussex for Tough Mudder. The atmosphere in the car was one of nerves, excitement and hunger. 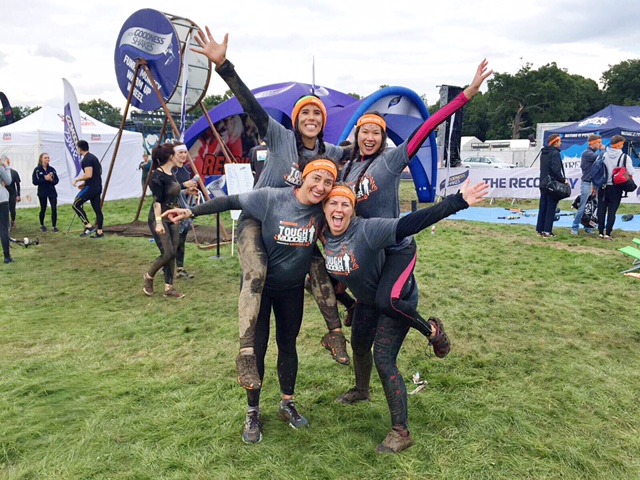 For Lucinda and Hannah, they were popping their Tough Mudder cherry. For Rosie, it was her third (because she’s crazy) and for me, it was my second. We’d done as much training as we could with our busy crazy lives and now it was time to give it our all. Even though Rosie and I had done this before together, this doesn’t mean we weren’t nervous. We were perhaps even more so because we knew what to expect!

For me, I realised just how things had changed for me since my last Tough Mudder and this one. Now, I’m a mum and perhaps slightly more aware of my own mortality and that I have a mini person who depends on me. I also discovered that my trusty compression tights that I used to wear to all my obstacle course races were a little too tight for comfort. Thanks mum tum!

Of course, the first point of call when we arrived was the toilet. We weren’t sure if this was going to be our last official toilet stop before we started! As we had Ed with us, he was officially our bag carrier, allowing us vital time to perfect our pre race photos (we ran out of time…) and to grab some water before we ran into the 9.15am warm-up. Which was epic by the way. And then the race started!

Here are our own personal accounts of our Tough Mudder experience:

Having only a couple obstacle course races under my belt, I was understandably nervous for Tough Mudder. I had seen many pictures and had heard a lot about Tough Mudder, especially about the electric shock wires! This alone was enough to put me off! When Eliza initially asked me to join the Healthy Living London Tough Mudder team I said, “I don’t think so!” However, Eliza ignored this and signed me up anyway and I am so glad she did!

Waking up at 6am is not my idea of fun. The day/morning was cold and grey, but we all huddled together in Eliza’s car and set off for Tough Mudder London South, aka miles out of London! I was so grateful that we were driving as it meant we could take loads of stuff, have somewhere to change, store our things, keep warm and get there and back without having to rely on trains or taxis.

When we arrived, the day had brightened, the atmosphere was exciting and the adrenaline was kicking into gear! Having shed our warm clothes, signed our waivers and completed our first obstacle – the portaloo, we were herded into the warm-up zone ahead of the course. G.I.Joe belted out instructions to warm up our bodies and familiarise ourselves with the cold and damp grass! What was already prevalent during the warm up, was the necessity for camaraderie and team work; begin the course as a team, finish as a team.

And we were off…

We followed the orange smoke into the woods and we began the Tough Mudder course. 12 miles of running, broken up with 20 obstacles – thank goodness! I am not the best runner, but we had a great team with lots of gossip and giggles that kept us going. The obstacles were so much fun, if a little scary at times. A few of the obstacles were so high, you had no choice but to befriend the closest stacked bloke to help launch you over or pull you up, as you clung on for dear life! In fact, I have had a hand-shaped bruise on my inner thigh that is only now fading! FYI – don’t be surprised with the amount of bruises that blossom over your body in the days following Tough Mudder!

For me, the hardest moment was just after sliding down the ‘Arctic Enema’ and having to then dive under the bar, submerging yourself fully in freezing water, to reach the steps that led out of this icy bath. Whoa! I didn’t love the electric shock either, but having thought that all the hanging wires were going to zap me, it was a relief when only a few created spasms! I enjoyed the ‘Bloc Ness Monster’. It was a bit like a watermill, shuttling people from one side of the pool of muddy water to the other. Not only was it a great example of teamwork, but it gave us all a well needed rinse! The ‘Funky Monkey’ bars were tough for me, but I had a go, succumbing to the inevitable swim! The ‘Mud Mile’ looked like a fun set of muddy slides, but let me tell you, these slides had stones embedded into their surface. A few holes appeared in my trousers, but poor Lucinda was positively cheeky!

Overall, I really enjoyed Tough Mudder, despite my initial anxiety and nerves at the start. I had a fabulous team and had so much fun completing the course. I completed every obstacle, even if that meant swimming rather than swinging, and ended the course with a smile. I would run a Tough Mudder again (I want to collect lots of headbands!) and I hope that my team would be by my side once more.

It really does take a tribe!

I was absolutely blown away by the Tough Mudder experience.  As we drove to the event site a Holmbush Farm in West Sussex, I was certainly feeling a degree of trepidation about what loomed ahead, but as a team I felt confident we would help each other through, which we did with a bucket load of mud, smiles and laughter along the way!

Tough Mudder is a team event, and not just in the sense of the group of friends you sign up to take part with. Everyone who signs up is part of the same team, and what makes this experience truly special is how complete strangers help each other through the obstacles.  There are quite a few that are near impossible without the help of a willing person to give you a leg up, arm or shoulder to stand on.  My hearty thanks goes out to the big burly men that stretched out their hands to help us over the high walls.  We couldn’t have completed it without you!

I knew it would be tough and I knew it would be muddy, but I was surprised by the scale of some of the obstacles.  They really aren’t for the faint hearted!  That said, some are more enjoyable than others.  The arctic enema is as it’s name suggests; unbelievably cold!!  The electric shock run, will give you electric shocks that feel like you’ve been punched!  And you will wake up the following morning with some battle scars in the form of bumps and bruises, but it is absolutely worth it.    We laughed and smiled our way through the full 10 mile course.

From the start to the finish, I was incredibly impressed by the seamless organisation of the event.  It was brilliantly marshalled, with food and drink stations and porter loos perfectly placed around the course.  The whole experience exceeded my expectations and was brilliantly good fun.  I would recommend everyone has a go, and it’s definitely an experience to be shared, so rally up your friends and enter as a big group.

It was my third time doing Tough Mudder,  but admittedly I didn’t feel any luckier. Sometimes it’s much better for your nerves not to know what you’re about to face…

Tough Mudder is all about camaraderie and a lot of obstacles rely on the help of other (stronger) people. I would not have been able to complete half of the obstacles without my team mates giving me leg ups and words of encouragement!

The hardest obstacle for me was the one which involved putting wooden picks into a near-vertical wall and climbing up and over it. This came round at about mile 6 or 7 when my hands were comically numb and I could only form what looked like crab-claws. If it hadn’t been for the man below me giving me a leg up and my team mate pulling me up from the top, I would have flattened the people below.

My advice for people who are doing Tough Mudder for the first time (other than to dress appropriately and ensure you’re hydrated and well-rested before the race), is to use any nerves you have to your advantage (adrenaline will take you far and you may surprise yourself), and don’t be competitive with other people – they’re all there to help you!

Even though I’ve got about 8 obstacle course races under my belt now, this was my first since 2015. It felt great to pull out my trusty inov8’s and get geared up but at the same time, I winced slightly when we were encouraged to get down and dirty in the warm-up. Where had the mud-lover in me gone…?!

Luckily, it didn’t take too long to bring it back! Tough Mudder is definitely not for those who don’t like mud.

I always forget how long 12 miles actually is. It’s a REALLY long way, especially when obstacles are inconveniently placed in your way. By the end of it, my hips were really aching. There’s little time to think about aches and pains however when you’ve got muddy water to slide into and ramps to crawl / hoik / be hoisted up, adrenaline kicks in. And speaking of ramps, there were many we couldn’t have done by ourselves. As strong as we are, some of the men had the strength we needed and we couldn’t have done it without their generous help. Indeed, one of the best things about Tough Mudder is the team spirit which you can forget exists.

Challenges like this are a great way to discover just where your strengths and weaknesses are. I’m better than I thought on the strength work and surprised myself with some of the obstacles I completed. My weaknesses? On the ones which require you to jump or slide… I’m basically a control freak! 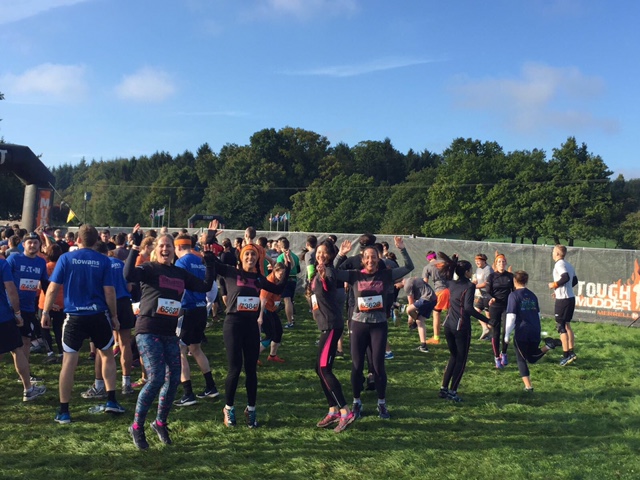 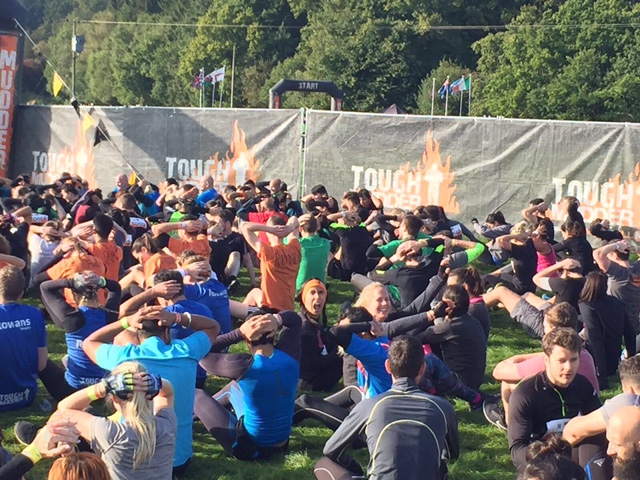 Realising it’s going to be MUDDY 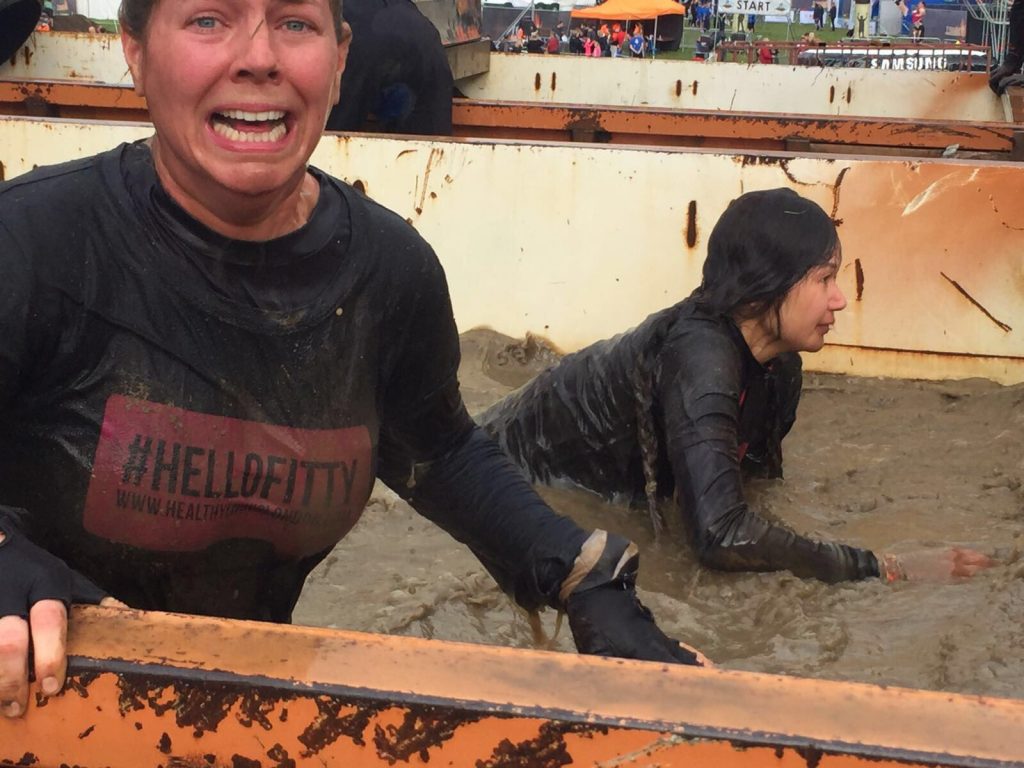 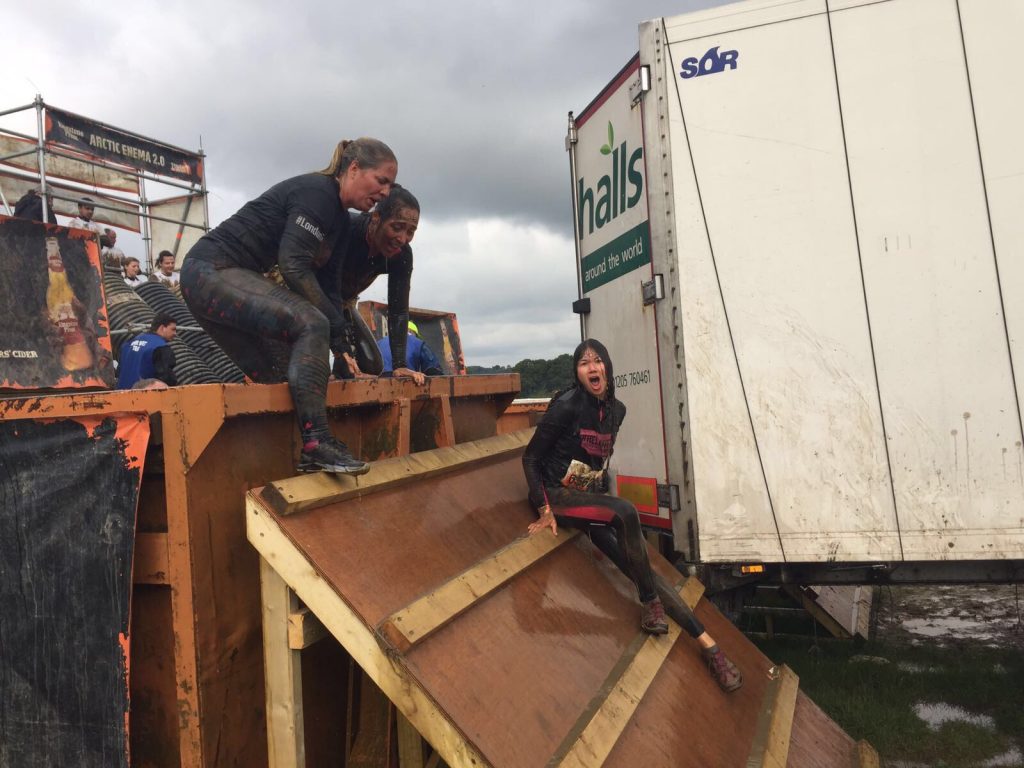 The Arctic Enema is SO much fun! 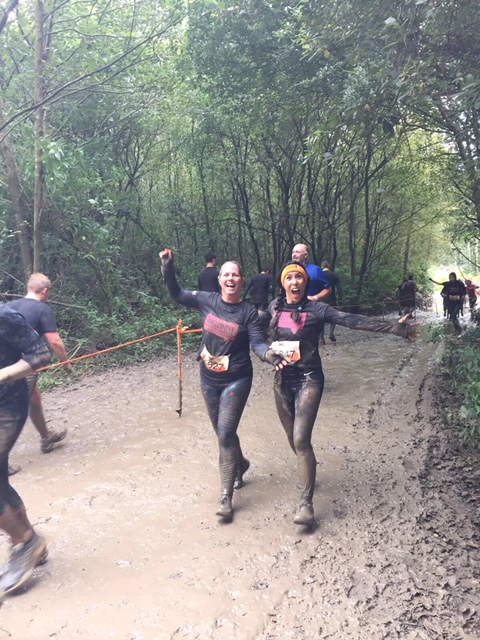 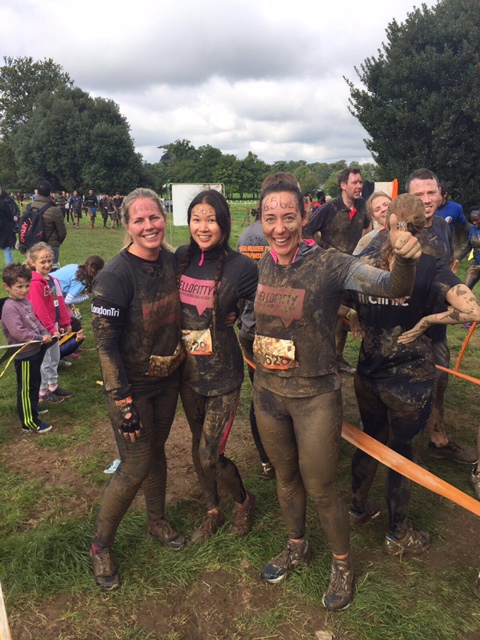 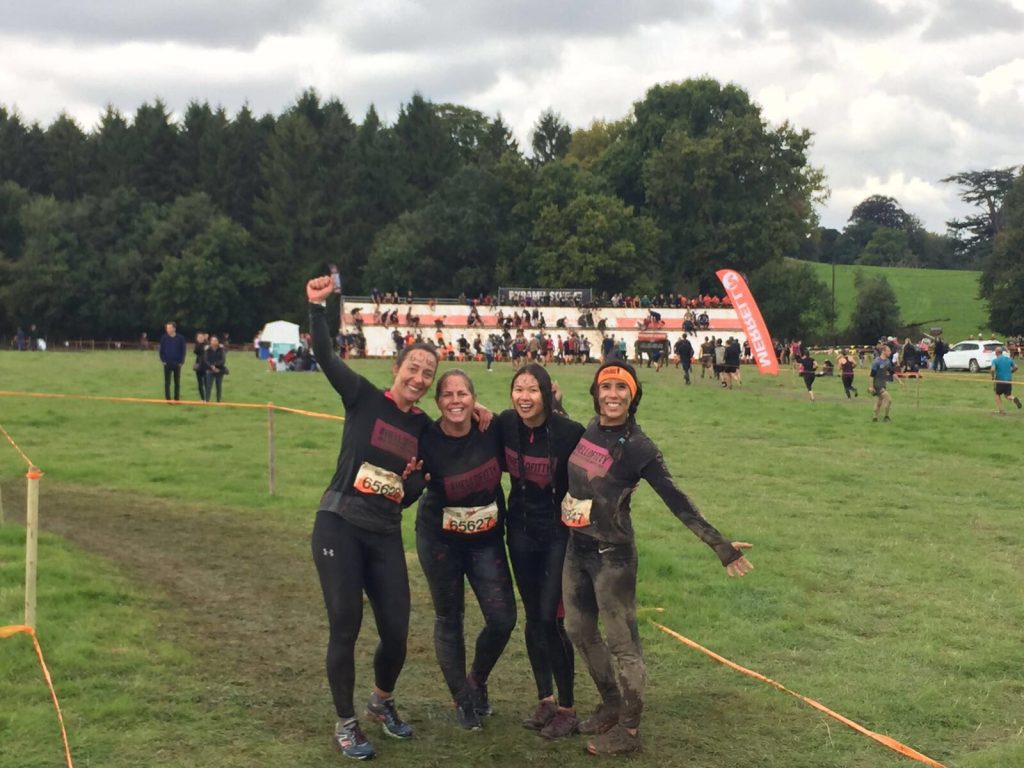 Photo stops, or a good excuse to take a break? 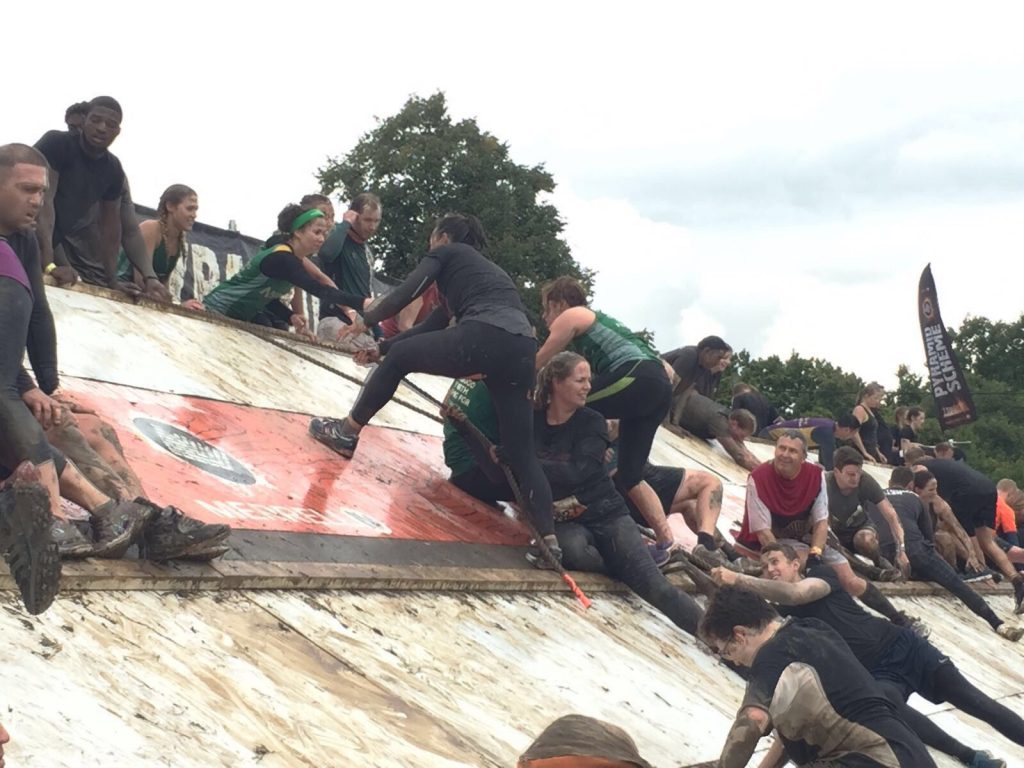 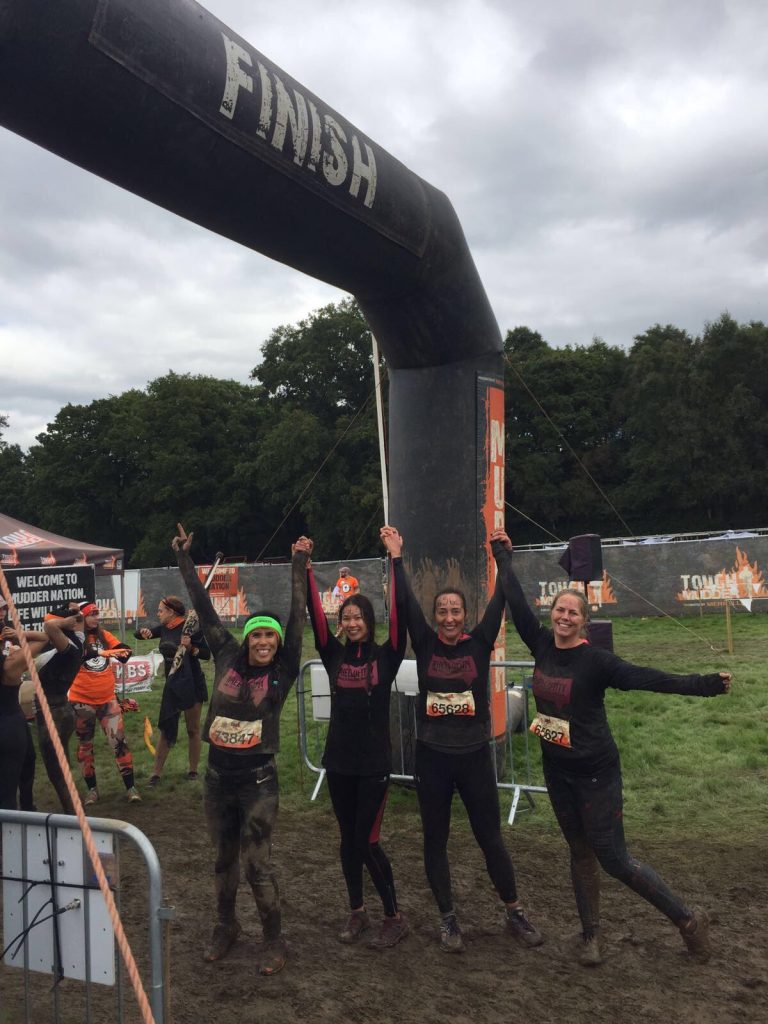 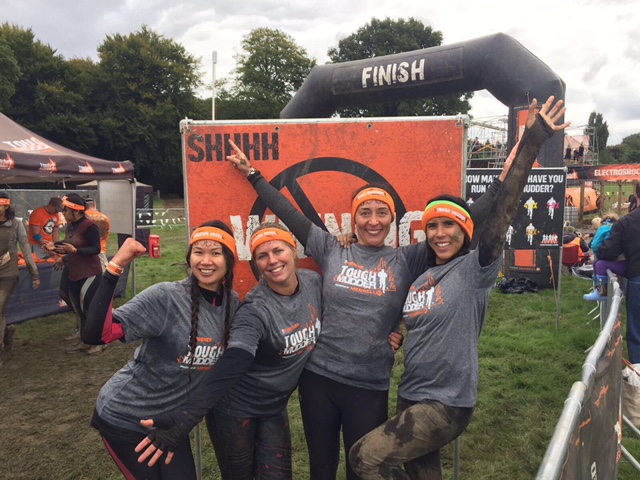 We survived! And are still smiling!

I’m so proud to have run Tough Mudder with this fantastic group of people. It was brilliant to see people step into different roles where needed as the team needed it. Everyone came into their own, whether that was bringing a contagious sense of fun, handing out high-fives after tricky obstacles, offering encouragement on the hard parts and stepping forward when a leg-up was required (at one point, I think we were actually clambering over Lucinda’s head… thanks Lucinda!)

Thanks For Goodness Shakes for helping fuel us through our training and for providing a much needed post-workout fix!

Note: In this article, we refer to the length of the race several times. Lucinda, the optimist, says it’s 10 miles. Hannah and I says it’s 12 miles. It’s actually somewhere between 10 and 12 miles!