Touched by the great work animal charity, Pets2Adopt Cyprus had done to help find homes for stray and abandoned dogs in Cyprus, Sophie from Fitology and Eliza from Healthy Living London decided to put on a bootcamp to raise much-needed funds. These funds would go a small but vital way towards medical bills, transports, blankets and food and accessories, such as leads and collars. Supported by Coconut Merchant, Cherry Active, Propercorn, Bounce Balls and chef, Susie, aka Gourmet Glow, we raised over £100. 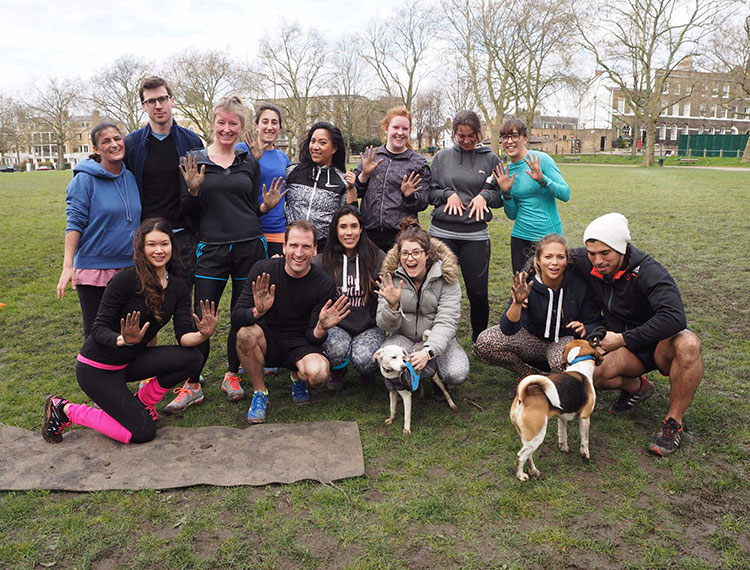 9th April, 7.30am and raining. At 11am Sophie from Fitology and I would be holding an animal-themed Charity Bootcamp. Outside. In the park. This rain had better stop. Come 11am, the rain had indeed stopped but the grass was muddy. Very muddy. This was slightly worrying as our workout was based around animal-movements and a lot of these would require our participants to get down and dirty.

Ready for a brand new fitness and furball adventure, our 12 bootcampers turned up. Some were well-prepared with gloves and wet-wipes. One wore brand new trainers (I only discovered this at the end – sorry Paul!) I was particularly proud of Healthy Living London writer, Amy, who was fully decked out in animal prints. ROAR. It was great to have Pip along and also Humphrey, the Puggle. 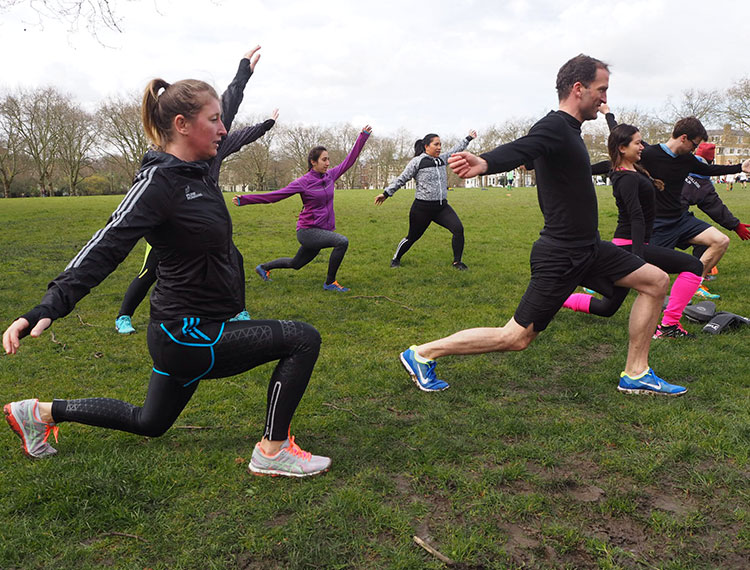 The warm-up: Before everyone got muddy 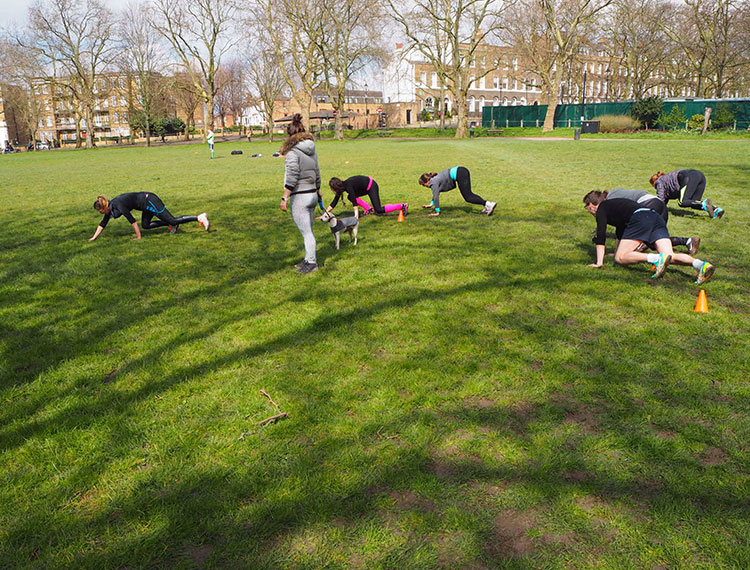 Bear Crawls at the zoo 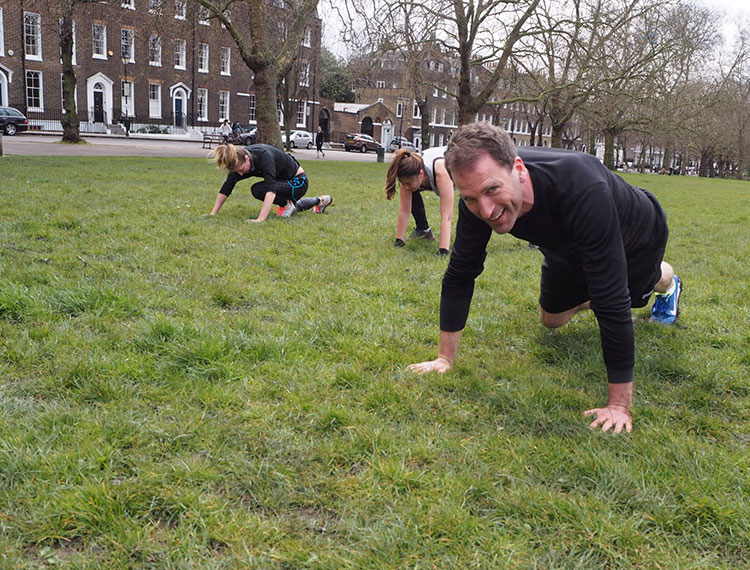 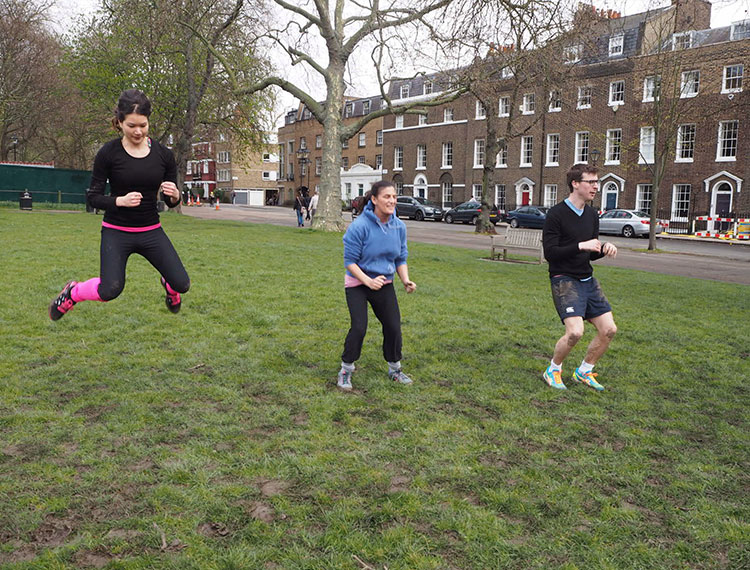 Rosie revealing that she was a kangaroo in a former life

Our fitness session warm-up included ‘The Zoo’, which consisted of a variety of animal-themed movements to get muscles moving. People bear-crawled, frog-jumped and crabbed around in a square, both forwards and back (to work slightly different sets of muscles) before Sophie took over the main part of the workout. Again, animal-themed movements were incorporated, although the frogs were upgraded to include burpees as part of their movement (she is a taskmaster!) I personally loved the high-stepping ponies. After a ladder set just to finish people off, we had a cooldown and then goodie bags. Big kudos to everyone who came – although it wasn’t raining, it was ridiculously muddy and everyone got stuck in which we thought was testament to how awesome our participants were. 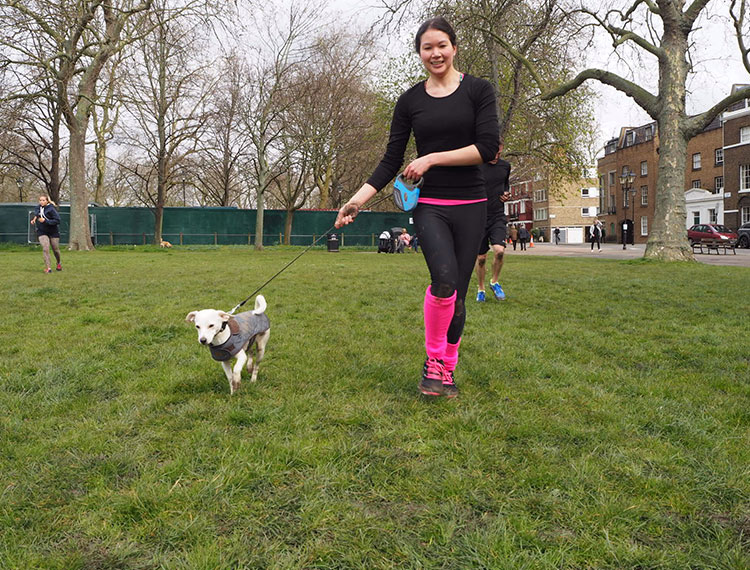 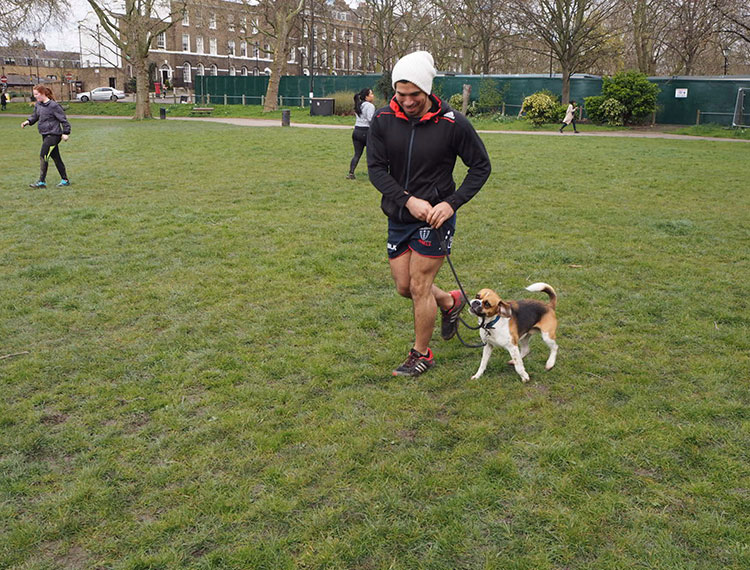 – % of mud on the average bootcamper: 40%
– Number of animal-themed exercises: 8
– % of people smiling by the end: 100% (although we’re not sure whether in relief or from adrenaline)
– Number of times mud appeared unexpectedly on belongings even after using baby-wipes: 26
– Number of happy dogs: 2
– Number of times Pip & Humphrey helped out: 12
– Money-raised: £142.40 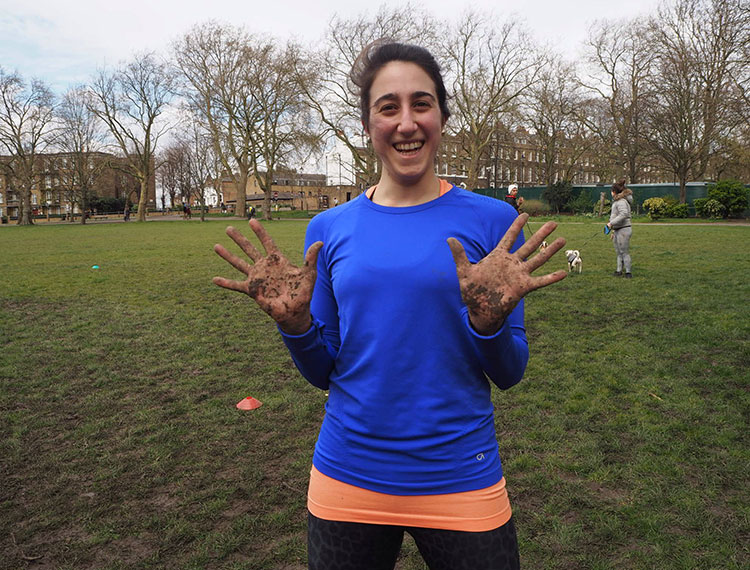 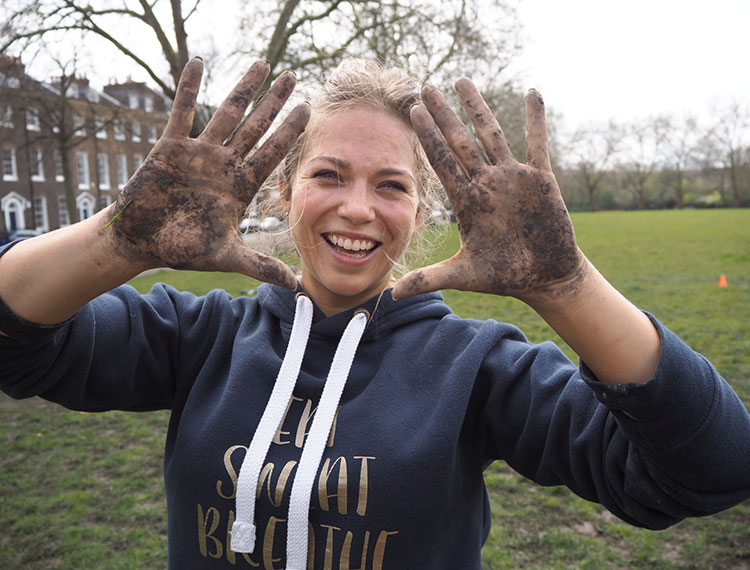 Pip, after all, is the reason why were outside, in the mud, so it makes sense to tell her story. In February 2016, I fostered her (after getting agreement from my husband in a moment of weakness). She arrived on a Monday and it was then I realised she wasn’t house-trained, had an insatiable appetite and was an absolute darling. She was also scared of traffic and was so small, none of the collars I had fitted her. I immediately booked her in for puppy parties and dog training. A few days into having her, Sophie spotted her in a photo I’d uploaded on Facebook and we got talking. Then Sophie came over. Then Sophie’s fiancé came over. And then, less than 2 weeks after taking her in, Sophie adopted her. Since then, I’ve personally seen Pip grow into a settled, gorgeous dog. She’s now completely house-trained, can be let off a lead and can even do tricks! It’s been such a pleasure to be part of Pip’s journey from being found on the streets of Cyprus as a starving stray to helping her find her home. And it wouldn’t have happened without Pets2Adopt Cyprus.

Pets2Adopt Cyprus is run by volunteers who rescue dogs off the streets and the high-kill shelters and provide housing or foster homes until a suitable home can be found for them. They also save animals which have been involved in accidents, abused or mistreated. Just take a look at their Facebook page for the hundreds of animals that they have helped and are still helping. Once a dog has been vetted and tested for a variety of diseases, they are put up for adoption, facilitating adoptions all across Europe. As well as young dogs, there are also puppies, and older dogs who have been cast aside by owners who have tired of them or have decided to move away.

There’s many ways you can help supports Pets2Adopt Cyprus:

A big thank you to:

Our bootcampers: Iliana who found us on Twitter, Paul of SW4 Fitness, Emma who was new to the area, Sophie who dove in at the deep-end by using this as first foray into fitness after having her baby, her husband who is normally more of a runner, the awesome Natalie and Alex from Sweat & Swagger who kept smiling the whole way through, Sara who still managed to look presentable even after all the mud and my lovely Healthy Living London writers – Rosie, my sister who had to come (sorry for making your legs ache), Amy who brought along her cutie-pie Puggle, Humph, and her lovely fiancé, Mo, and Christina aka Fitness Magpie who can bear crawl like no other and wholly embraced the mud.

Will Gold & Stephanie Shek: Who gave most generous donations, thank you so much

Susie, aka Gourmet Glow: For making the best post-workout bars EVER. Recipe is here >

Our brands: Coconut Merchant for helping supply some of the bar ingredients and for the very moreish coconut flakes, Cherry Active for your hugely useful water bottles, Cherry Active samples and dried cherries for the bars, Bounce Balls for letting us have a sneak preview of your new Coconut & Lemon balls and Propercorn, because who doesn’t LOVE popcorn, especially in your delicious flavours? (My favourite is still the sweet & salty – I’m a traditionalist!)

Our photographer: Beth, who also guarded our goodies and bags. 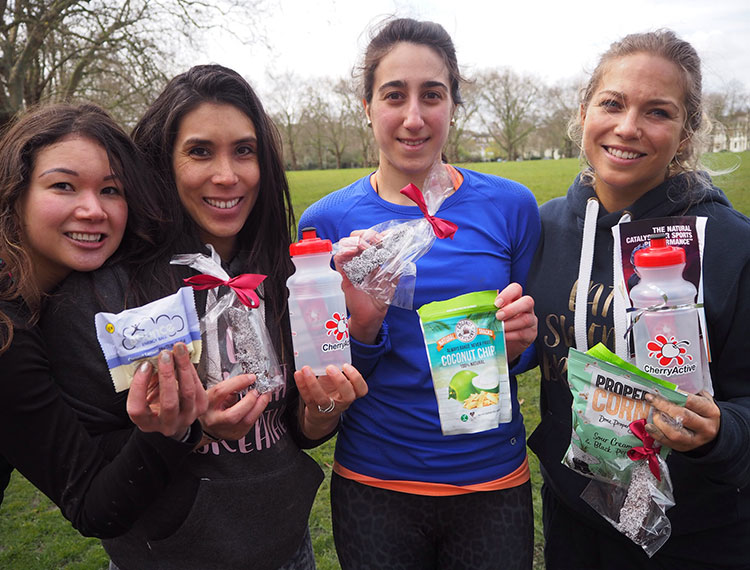