I’ve done several martial arts before: Taekwondo, Brazilian Ju Jitsu, Win Chung, Boxing and even a Kendo lesson but I can honestly say that Aikido threw me. Not literally as I would have expected but mentally. 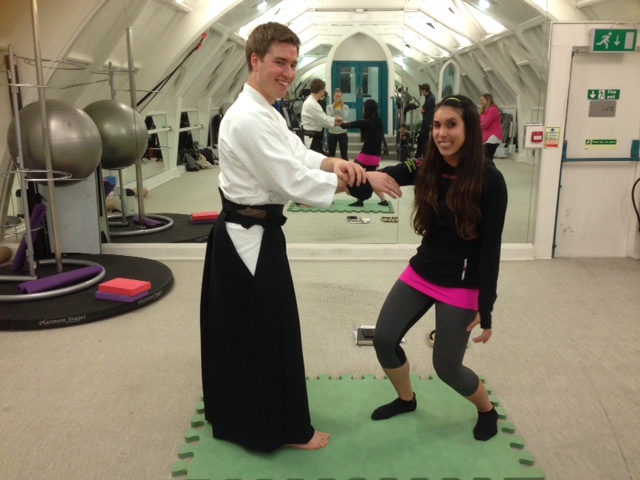 Look at Adam grinning away whilst I’m in pain. Ok, so it didn’t hurt but I can see how it would if he did it properly.

When I Googled Aikido, this came up:

Aikido (Japanese: 合気道 Hepburn: Aikidō?) [a.i.ki.doː] is a Japanese martial art developed by Morihei Ueshiba as a synthesis of his martial studies, philosophy, and religious beliefs. Aikido is often translated as “the way of unifying (with) life energy” or as “the way of harmonious spirit.” Ueshiba’s goal was to create an art that practitioners could use to defend themselves while also protecting their attacker from injury.

Forgive me, but I still don’t get it. It all sounds a little Buddhist and yet there’s a photo of someone getting thrown to the floor next to this description.

There was only one thing for it – turn up and see in person what it was all about.

Toral from The Urban Kitchen invited myself and Amy along to Adam Cooper’s Central London Isshinkai Aikido class at the Albany Club. Aikido is something that Toral credits for helping settle her mind and for giving her focus. I need some of that although I’m not sure how this would work in a martial arts setting – I’ve generally found them to be rather sweaty and sometimes a little frightening, mainly because I’m surrounded by people who want to hurt me.

Neither of us knew what to expect, but we also think that’s part of the fun – turning up and trusting. Decked in our loose-fitting, comfy clothing, Adam, clad in what I can only describe as a SKIRT, took us upstairs to start our session. And I have to say, it was one of the calmest martial arts sessions I’ve ever experienced. There was no shouting. Or sweating. It was strange. But that doesn’t mean bad.

Like most martial arts, Aikido begins with a ritual or a ceremony. There are 2 bows and nothing is without meaning – the 2 bows signifies not only that it takes 2 people to practice Aikido but also that it’s a contract between 2 people to work together and improve each other. After the bows comes clapping – there are 4 of them signifying that takes a minimum of 4 points to create a three dimensional shape. Apparently this is to help remind us that Aikido is about movement and space. Lastly, there was a final bow which was for gratitude and out of respect to the founder of Aikido and the practice. In this way, it reminds me of the philosophy of yoga as all the bows are undertaken with gratitude and respect.

As this was an introductory session, Adam spent a lot of time explaining the concepts behind Aikido. And demonstrations were key; as I quickly discovered, Aikido is a mind over matter art. And strength doesn’t come into it – it’s more about technique and the power of the mind. Okay, so that last bit sounds utterly crazy, right? Yeah, I thought so too. As did Amy. And here’s why. For one of the exercises, Adam had us stand with our arm at 90’ to our bodies. Our partner was challenged to lift our arm, bending it at the elbow. We had to resist. There was a lot of effort from our partner’s end, trying to bend the elbow and those that were stronger found it easier to resist. THEN, we had to go through a visualization technique, believing a force of running water to run from our bodies and straight from the tips of our fingers and try the same exercise. It was hard to tell if it really worked but those trying to bend their partner’s elbow found they were exerting themselves just as hard whilst the other person felt like the other person wasn’t even trying. If this had been it, I would have dismissed it as Amy just playing along. But we tried it several other times and I can’t explain it but it worked. With the visualization it was like nothing mattered apart from the stream of water. And no matter how much Amy strained or made weird faces, the mind was calm. It was very different to the sensation of pulling against Amy.

There’s a great video here that we took of Amy trying to move Adam. As you can see, it looks like Adam is just standing there and Amy’s being WEAK. (She’s not – I tried it too with the same effect).

An excerpt from last night’s aikido lesson organised by @theurbankitchen and taken by Adam @aikidolifebalance at the Albany Club last night. It’s unlike any martial art I’ve ever experienced because it’s less about trying to beat up your opponent and more about your mental state. Here’s @button81 trying to push over Adam – it doesn’t even look like she’s trying! It was also great to meet @sweatandfuel @nickimerivale @well_aware @lndnhealthandfitnessgirl @janeabouttown too

After several demonstrations of the mind over matter concept, Adam had just enough time to show us a couple more advanced moves, namely where someone grabs his wrist. It’s most bizarre because it’s like a dance and before you know it, the ‘attacker’ is eating the floor. Of course, we had to make sure he tried on several different people just to ensure it was ‘real’.

To complete the session, we end with more bows and claps. And it’s not something I noticed but others did; by the time we finish the class, for the most part the claps are in sync, which wasn’t the case at the beginning.

How much? There are free introductory sessions the first Wednesday of every month at 8.30pm, then classes are £10.
Where to find it: At the Albany Club, nearest tube is Great Portland Street.
Who should try it: Those who are keen to explore a different type of martial art that doesn’t rely on strength or fitness for efficacy.