I’ve only ever really thought of seaweed as a) the crispy stuff in Chinese restaurants (delicious, hugely unhealthy and not really made from seaweed) and b) the stuff I’ve slid on as a kid at the beach. So it was interesting when faced with a range of seaweeds that were there for cooking. It turns out they’re not just ‘seaweed’ but they have NAMES. 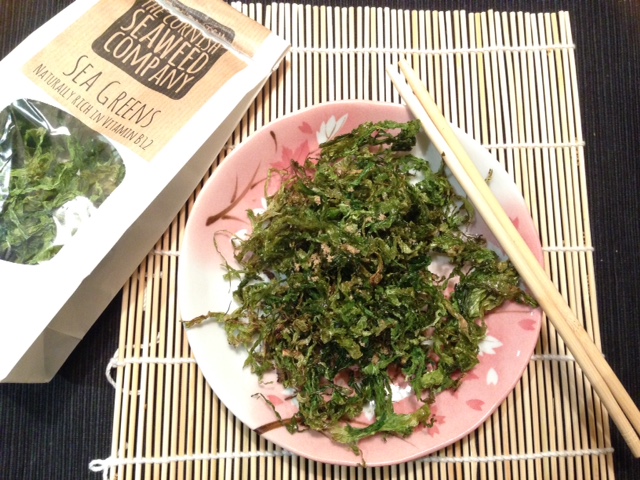 The Cornish Seaweed Company is run by Caroline and Tim, who, by looking at their previous jobs are obviously passionate about the environment and where stuff comes from. As a result, their seaweed is sourced locally (Cornwall, obviously) and is also sustainable using small-scale supplies. 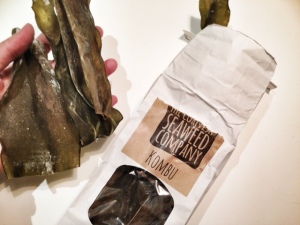 And as well as being the vegetable of the ocean, seaweed appears to have a multitude of health benefits, including having the highest number of vitamins, minerals and trace elements than any other food group. Even better, seaweed is said to boost immunity, combat disease, flush your body of toxins and help keep skin looking youthful and supple.

To be honest, when faced with a pack of Kombu, Sea Salad, Sea Greens, Dulse and Sea Spaghetti, I wasn’t sure where to start. It’s hard to know what to cook when you’re not sure of what something tastes like – you really do have trust the helpful suggestions on the back of the pack.

I started with Sea Greens, mainly because one of the suggestions was for crispy fried seaweed. As I love this so much, I thought I should give it a go. You have to really be careful when you fry the Sea Greens as one minute they’re green and the next minute their burnt but it doesn’t take long to get it right. As per instructions, I sprinkled it with sugar (they also suggested salt and sat down to eat it. Now, unlike fake crispy seaweed (the kind you get in Chinese restaurants), it actually tastes like the sea which makes it very different to what I’m used to. However, it wasn’t bad and would make an excellent side dish with something like grilled salmon. 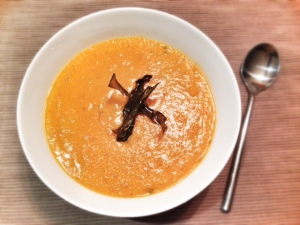 I next embarked on an experiment with Dulse. Mainly because it was described as having a smokey flavour. It said it was good in stews but I went a little off-piste and decided to add it to my red lentil soup. Now it was important that the taste didn’t overwhelm the rest of the flavours, mainly because the boyfriend is suspicious of anything too crazy. This time, instead of cooking it straight out the packet like you did with the Sea Greens, I soaked it in cold water to remove some of the iodine content. I’d hoped to be able to blend it in with the soup but the dulse had a funny way of avoiding the blender blades. I quickly learnt – I fished it out again and chopped it into small pieces before adding it back in. Much better. And it did make the lentil soup taste more smokey! To be honest, I also added it in for it’s nutritional content over the taste but it still tasted good which was a bonus. Discover the recipe for red lentil soup with seaweed here.

There are still several packets of seaweed left to experiment with and I’m thinking I’ll do something with a smoothie, fish and maybe also a pesto (the sea spaghetti).

Who wants to come over for dinner?

Where to buy: Shop online at www.cornishseaweedcompany.co.uk
How much: From £4 for a 20g pack
Who’s it for? Those who want to eat healthily and aren’t afraid to experiment.