It’s been a long time since I thought I would puke in a fitness class because of the intensity. The last time it happened was 16 years ago in a Taekwondo class at the University of Birmingham. And it’s easy to see why once you try one of Foundry Fit’s sessions. Laura, I blame you. 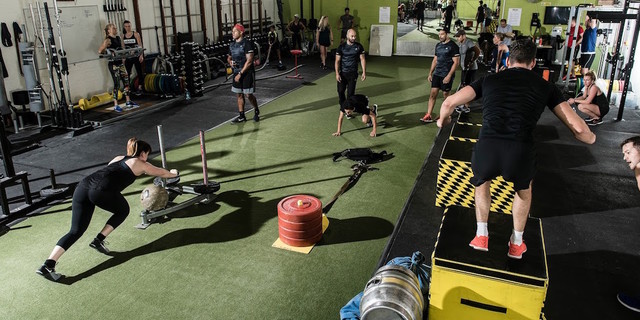 Walking into The Foundry is pretty exciting. To start with, I thought I’d arrived at the wrong place – it looks like an adult’s playground. There’s a stretch of clear space in the middle (softened by fake-grass style flooring) with a range of weight racks, bikes, massive stone balls, rings and what looks like several medieval torture devices. There were also several buff-looking men hanging about; never a bad thing.

Had I not arranged to work out with Toral, I’d probably have moseyed on right back out of there as it started to look a little intimidating. However, I’d run in a panic from Vauxhall station in order not to be late and I was damned if I was going to have run for nothing.

There were about 15 victims people at the 9am class. Laura lined us all up in front of a whiteboard and explained the get-up. We had 8 stations in total and were operating on a YGTIG (You Go Then I Go) system, where one of us would go all out at the station before switching over. For 3 minutes. After that 3 minutes we’d have a 30 second break to move onto our next station and start again. But first, a quick 5 minute warm-up which consisted of a variety of press-ups, lunges and more.

It really did help going with someone who was a friend and also someone who knew what they were doing. There were several stations with equipment I’d not used before and even though I’d practised deadlifts during my PT qualification, I’d not touched a barbell since. With guidance from Toral and some instruction from Laura, I soon got those badboys under my belt.

There’s something weird which happens at fitness classes like these. Time stretches. And your body does things before you even realise it. 30 seconds on an assault bike (these are actually the worst piece of equipment ever) feels like at least 5 minutes. And flipping a massive oversized tyre (I have no idea what they fed that tyre but it is a giant) seemed to go on forever. Yet hammering a tyre (on a par with boxing for releasing pent-up anger and frustration) went by far too quickly. My body quite enjoyed the first length of the prowler and sped me down the track but slowed down significantly when they realised what was going on during the return leg. I also had my first go at the Farmer’s Lift which reminded me a little of going on holiday and wrestling heavy suitcases at Highbury & Islington station. The weights were SO HEAVY (although I saw the girl after us load it up with additional weights so either she’s superwoman in disguise or it wasn’t that heavy) that I was sure my arms would just fall off (can that even happen?) but my body adjusted and once I’d got my breathing sorted, I realised I could do it, slowly but surely. We also had a round of skiers (I think they should called them ‘swimmers’ as the movements I was doing was more like butterfly). 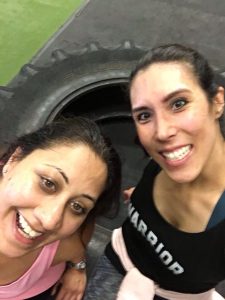 Toral and I pulling the strangest of faces after our workout, sitting on the giant tyre.

Before long, the class was over and I was exhausted. It’s amazing how out of breath you get doing weights. Even though Laura promised me a savasana at the end (LIES!), we did get to do our stretches lying down and just like that, our 45 minutes of hard graft was done. I had survived!

According to Toral, and like anything, the exercises do get easier the more often you go. If you’re already doing similar types of exercises, then you’ll be absolutely fine. And even if you’ve only really done yoga and bodyweight exercises for the past 6 months or are getting back into exercise, you’ll also be fine. You’ll probably ache massively after, but you’ll be absolutely fine. Laura continually prowls the space looking for technique to correct and encouragement to give

Unlike many of the new gyms popping up, The Foundry doesn’t have sleek changing rooms with GHDs and fresh towels. Nor does it have shiny, friendly-looking equipment. This place means business. People lift serious weights. They sweat. They make grunty noises. They pick up hammers and beat up tyres (although the tyres always bounce back). There’s no handcream to soothe calloused hands in the bathroom. It’s refreshing and fun and at the end, you feel like you’ve properly worked. I can’t wait to go back!

In a nutshell: A gruelling 45 minute class which builds strength and stamina. Each class is different so you’ll never get bored.
Who’s it for: Those who want to see serious changes to their body – this will strip fat, tone and build muscle and leave you feeling like a super hero.
How much: One-off classes are £20, unlimited membership from £179 a month and a 10 class pass is £179.
Where: There are two locations – one in Old Street (227 City Rd, London EC1V 1JT)
and one in Vauxhall (Beaufoy Walk, off Black Prince Rd, Lambeth, SE11 6AA)
Website: foundryfit.com