SBC. Otherwise known as The Skinny Bitch Collective. Founded by Russell Bateman, a PT, it’s turned into a global phenomenon with tickets to his classes selling out in minutes. But don’t worry, he’s also got a series of online programs too. Fed up of scrolling enviously through a bunch of skinny bitches on the SBC Instagram account, I decided to give it a go. 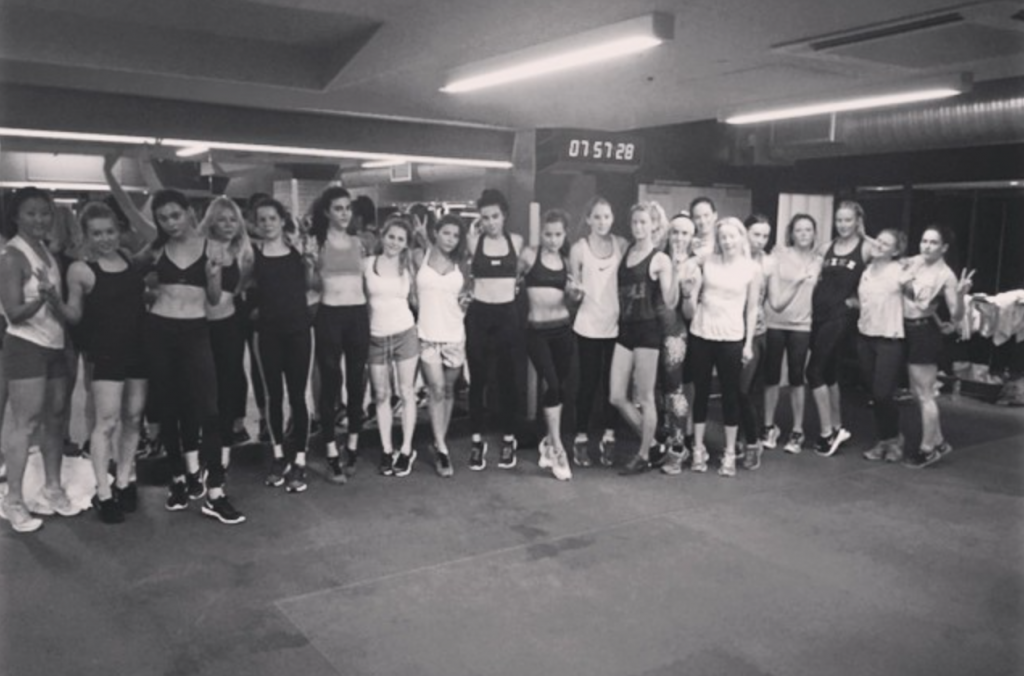 It’s Friday 7am and I’m in Marylebone. There’s 20 girls in the room and at 33 years old, I feel like I’ve got a good 10 ten years on them all. They’re all mostly pretty toned and lean. And I bet they’re strong too. Oh, and they’re pretty. Like, there’s some here who I would bet a green juice on being a model. As someone who considers themselves fit, being in a room full of size eights with gazelle legs has shrivelled my confidence levels.

There’s an air of anticipation as we wait warily. The red digital clock shows 7.02am. In runs a girl with an SBC crop top on. Shortly after, Russell arrives. There’s no welcome, no greetings for new members, Russell gets down to business. We’re in an underground room that reminds me a little of an old boyfriend’s room when he tried to get that red light district vibe by covering up his lightbulbs with cellophane. This is not comforting. Although hopefully there’ll be more excitement going on here than there was with my ex. (Me-ow, yes, my claws just came out).

I know that somewhere near the beginning, we did bear crawls around the room and then stretched our legs with a run along the running track that went the length of the gym. It must have been strange when mid-workout, all these flushed and sweaty women start pounding the floor, like a stampeding herd. Throughout the 50 minute workout, we used that running track several times, although I was pretty pissed off when one girl, who’d obviously had enough of running, doubled back before reaching the end. I hate people like that. I especially hate it when I realised I’m on my own at the end of the running track and like ants, all the girls behind that one girl have followed her. On the bright side, I’m not cheating myself.

There doesn’t seem to be that much structure with the class. But that could just be because there was no rest. NO REST AT ALL. Water had to be snatched in the odd few seconds that everyone was repositioning themselves around the room. I think it was all part of Russell’s grand plan – to keep us all crabbing and burpeeing and can-canning before our brain could realise what was happening. And yes, you heard right. We did crabs, we can-canned (not as fun as it sounds), we clasped each other’s hands, we tried to touch other people’s hips, we had some upside down time doing mountain runners against a pillar, we lifted weights above our head and so much more. Just as I thought there was some pattern in the session (you know how like most fitness sessions have sets of stuff?) it changed.

There were several things I was impressed with. Firstly, the blond girl with the ridiculously long legs. But not just because of her looks – doing upside down burpees, she had great form, it was beautiful to watch. And also when we ‘preyed’ on each other – ok, so imagine being on all fours against another and trying to touch your opponent’s hip without them touching you – it was quite animalistic but not in a scary warthog, grunty way, but in a fluid, intense way. Oh, I can’t describe it, you’ll just have to go.

“I hated it’, a friend told me before I went. She’d been to a taster session at a fitness event. So I too, was prepared to hate it. In solidarity and all that. But I didn’t. I really enjoyed it. I enjoyed the mix of movements, the group exercise, the fact that I felt like I was actually keeping up with these skinny bitches, even if my legs were twice the width of theirs. But I can see why it would be absolute hell for some people. This isn’t something for a beginner. Nor for people low in confidence. Nor for those who hate press-ups and burpees (call me weird, but I’m quite fond of them. I blame the Spartan Race). And definitely not for anyone who isn’t competitive – I found the group mentality quite strengthening – I think people are more likely to give more to their exercise because they don’t want to be the first to drop their legs when doing leg lowers, or stand up when we were doing squats.

A brief chat at the end of the class revealed that Russell’s aim is to give people something different – that he can prove being skinny doesn’t mean weak. That strong isn’t the new skinny – that they can go hand in hand, along with a healthier body. The skinny upside-down blonde chick was testament to that.

For me, I loved it. It was fun, it was furious and the music was good. Plus, I felt great at the end, even if it did cross my mind that I may be sick halfway through (I spoke to another girl who had felt the same but she said we didn’t have time to feel sick because the next exercise had started. So true). Sign me up for the next class!

Who’s it for? Those who want to be pushed to the next level of fitness. And become a skinny bitch.
How much? A 50 minute class costs £40
Where is it? You’ll find out once you’re booked in. It all feels a little secretive. The class I did was in Marylebone.
Find out more: theSBCollective.com