Swimming Nature provide swimming lessons of all types to all sorts at locations in London and across the UK. Swimming is famous for being one of the best whole body workouts, and for reducing the chances of injury – so we decided to see whether it was worth taking the plunge and investing in some private adult swim lessons. 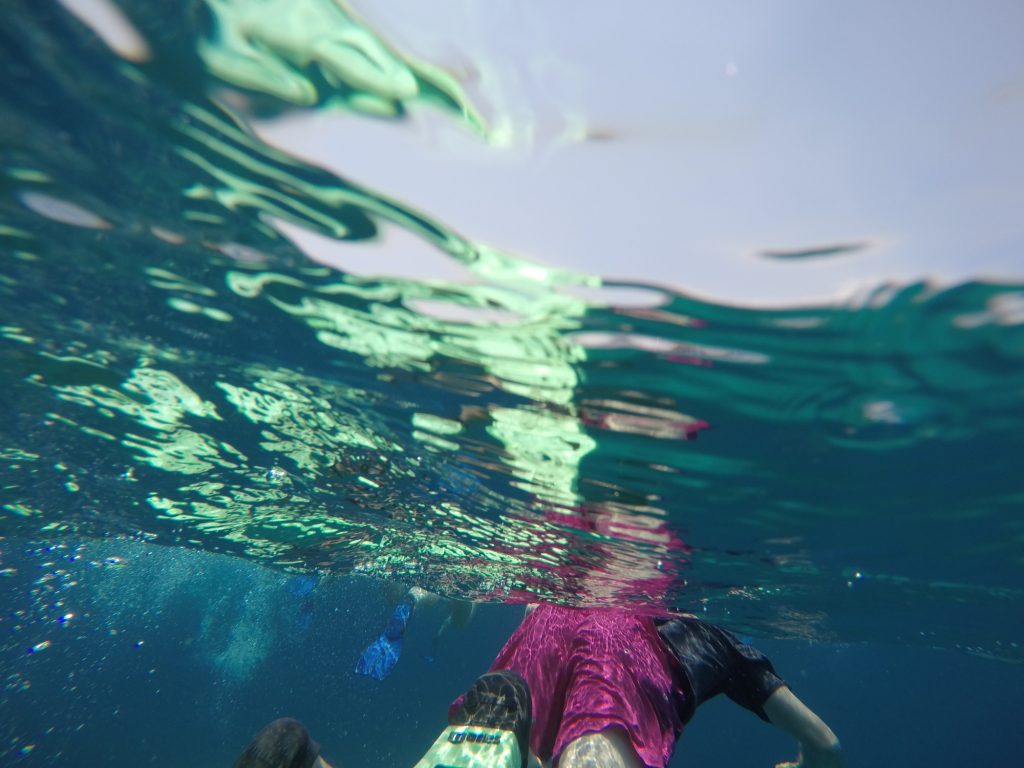 Tom swimming in the sea off Gili Meno, Indonesia

I was a little daunted – as well as excited – at the prospect of learning to swim again. I learned up to the age of 11 but nowhere near well enough. For years, water has been my kryptonite, turning me from fully functioning human into an uncoordinated, out of breath, spluttering amoeba. My wife watched me swim once and she still swears that I managed to swim backwards – no mean feat considering I was doing front crawl.

This is a shame because I actually don’t hate water. I did some inept snorkelling on my honeymoon and loved it, and then I went surfing in the freezing shallows of a windswept beach near Cork last year and thought surfing was possibly the most fun thing ever. The downside being that I would never be able to learn properly until I wasn’t at risk of drowning the moment I wasn’t in my depth.

I’ve actually got a lot of friends – many very sporty – who are in the same boat when it comes to swimming. They want to swim for fitness and fun but are embarrassed, uncomfortable and incompetent when they get near the water. Others are swim whizzes but I found out that these actually account for a fair proportion of Swimming Nature’s students – with triathlon training, river-swimming challenges, and competitions all spurring people to find ways of improving their technique and performance.

Swimming Nature has a range of instructors specialising in teaching different age groups (infants, kids, adults) and many teachers also specialise in different styles. They also offer a few group sessions, but these are mostly targeted at younger age groups. I signed up for 4 30 minute lessons with Mark Trude at my local pool in Fitness First Highbury, hoping that this would give me a good chance to test out whether there was any hope of me becoming someone who could swim properly.

The first great thing I noticed about private lessons is YOU HAVE YOUR OWN LANE! This definitely made me feel more comfortable as I am British so hate getting in anyone’s way. The second great thing about private lessons is you get someone to help you through any anxieties. After a bit of chatting before the class, Mark put me at ease and told me just to give front crawl a go so he could take a look – no matter how ugly it was. He recorded it, allowing me both to watch what I was doing and to provide a baseline that I could improve from. He was incredibly professional and polite: a nice example being that he got permission from other swimmers before recording me, even though they would be out of shot.

Mark took me through a lot in a very short space of time. I wanted to learn front crawl and we focused on that and particularly the legs but we also tried some other techniques, including floating, sculling (new to me, but it basically involves using your hands as paddles), and some backstroke (again working mostly the legs). Given my limited ability, we basically did one or two 25 metre lengths then paused to chat about what was working and what I could tweak.

The main aim seemed to be to help me understand what was going wrong and start getting a feel for how to kick properly. I learned that I was:

One very interesting, quite reassuring thing Mark told me is that while my body floats it does not float like some peoples. He puts this down to long legs and moderate body fat – and says that he is the same. See IT’S NOT MY FAULT! But Mark said we could still get my body moving through the water in a great line through better positioning and movement.

Another thing that was very useful for me was the use of floats (both for arms and legs) so that I could concentrate on one thing at a time. They also helped give me a bit of ‘feel’ for the water (I didn’t know what feel was but I understood it once I’d felt it!).

The time absolutely flew by and I certainly wasn’t exhausted by the end, though I did feel like I’d done exercise. Mark suggested I stay on to practice solo for a bit and then practice a couple of times before my next lesson. I left feeling motivated and excited to learn more – and pleased to have found a really capable teacher who I felt I clicked with.

On reflection, I think swimming classes are probably something many more people could benefit from – but are put off by either embarrassment (if not very good) or by a strange expectation that once you’re learned as a kid you should cope on your own. Swimming is basically more fun if you’re better at it – as I discovered even in one lesson – and I really am convinced it’s a much better alternative to running for those of us who have slightly worn out joints from years of running. Whether you can improve quickly, and how important teaching is to that progress is something I’ll update you on once I’ve had my remaining three lessons…

Who’s it for: Anyone who wants to improve their swimming – and have more fun while doing it!
How much: Fees vary dependant on location and instructor. Single personal tuition costs from £72 a session to £896 for 14.
Where to buy / where is it: Swimming Nature instructors teach at pools across London and other UK cities. See here for locations.
Website: www.swimmingnature.com

Tom is married to Eliza Flynn and is occasionally persuaded to review things he likes and she gets sent for review. He has a whole other career – follow @tom_gash on Twitter or go to tomgash.com to find out more.