ModiBodi, the period pants, could be the environmentally-friendly solution we’ve all been waiting for. They claim that their range of knickers can hold up to 2 tampons worth (or 3 teaspoons) of liquid. Sounds interesting but terrifying? My thoughts exactly, but someone had to see if they worked. 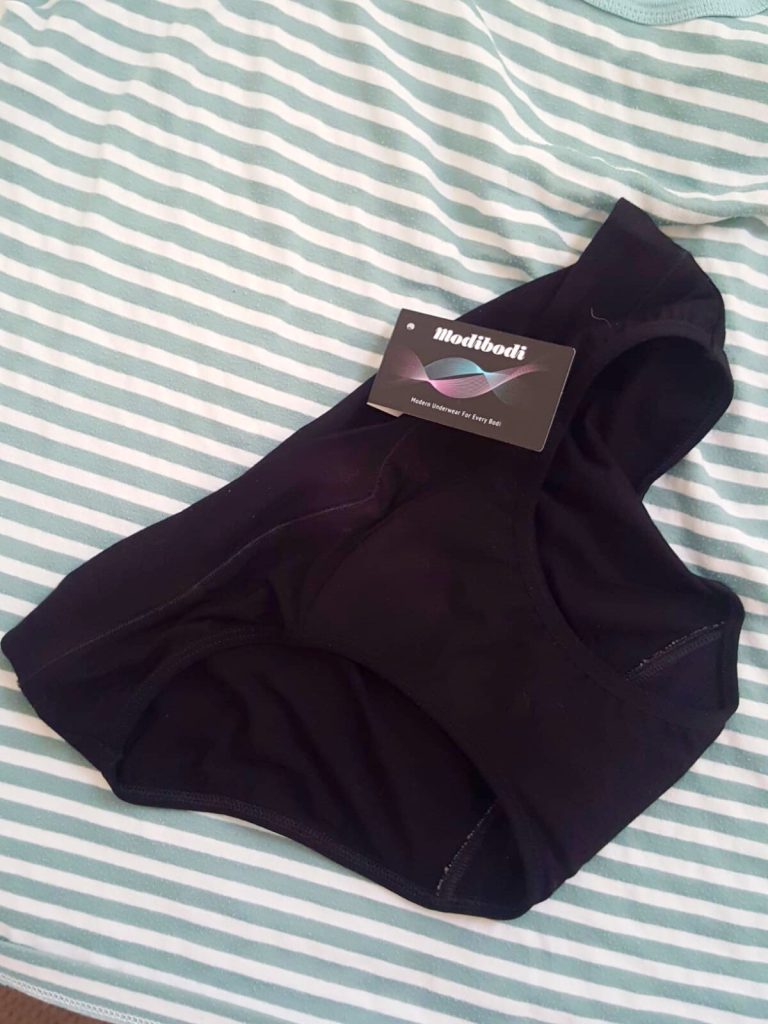 I’m a naturally suspicious person. But also curious; a little like a cat, I like to think. And pants you can wear on period days without any protection sounds a little too good to be true. But if they work they’re a period gamechanger!

Not only would you be helping save the environment, but the ModiBodi pants would also be kinder to your body. For example, did you know that many tampons are made from synthetic materials as well as cotton, contain small amounts of the potentially carcinogenic substance, dioxin and can also contain parabens which are implicated in higher rates of oestrogen, such as breast cancer. Some even contain perfume which can irritate your lovely lady bits. And don’t get me started on pads!

There are lots of interesting period solutions, including the menstrual cup and organic cotton tampons. But if you want a solution which doesn’t require faffing about with sticking things on your pants or up your fanny, could period pants be the answer?

We’ve been constantly bombarded with ads from companies telling us that our period is no excuse not to do all the usual things we’d normally do – from horse-riding on a beach to roller skating. All in our crisp white clothes of course. For me, and I’m sure, many others, when we’re on our period, the last thing we feel like doing is prancing about in such risky clothing; we’re very much aware that there could be leakage and if that wasn’t all, we’ve got to contend with the bloat and stomach aches. Women have been using menstrual pads since the 10th Century in Ancient Greece (that’s the first reported mention at least) but is it time for a change?

Here’s where I need to confess, I’ve had one period since October 2015. And I tried the Maternity pants out rather than the normal ones. However, they’re made using the same technology and functionality as the other pants, they’re just a slightly different look and feel. Ok, I hear you ask, but why would you need to wear period pants when you’ve not had a period?! Because during pregnancy you can experience increased discharge and after, every new mum has lochia (bleeding after birth). This is present regardless of whether you have a vaginal birth or caesarian and happens as a result of the placenta coming away from the uterus. Unlike periods which last 3-7 days, lochia lasts for up to 6 weeks (!) with heavy bleeding at the beginning which becomes less and less as your body heals, turning from bright red blood to darker browner blood and some discharge. So these pants are getting the MEGA test!

I was imagining something with a bit of a thick nappy gusset so was a little surprised and alarmed to find not only were the pants super soft, but also thinly padded. These can handle a flow of 10ml, or 1-1.5 tampons or 1-2 teaspoons liquid, which constitutes a light to moderate absorbency. They’re super comfy and stretchy so are great whilst pregnant. But it’s post-pregnancy which I was more interested in. For this birth, I was heavily persuaded to have the injection to help speed up the process of ‘birthing’ the placenta and as a result, I feel that the bleeding I experienced was much reduced; for my first birth, every time I stood up a heavy gush of blood would flow, so much so that I was having to change my trousers several times a day despite wearing post-natal pads as thick as your hand. Still, the bleeding is quite a lot, definitely as much as you’ll experience during a period.

Once I had fully committed to trusting these pants, I was pretty damn impressed. As well as being really comfy, they handle all sorts of leakages really well. I could move about confidently and it gave me one less thing to have to think about. They work just as well as tampons and pads, in my opinion, with the added bonus of being more eco-friendly.

They’re made from bamboo (which is naturally anti-bacterial and sustainable), sports merion and microfiber, and are made from 3 different layers; the top wicks moisture away so you don’t feel damp and stops smells, the middle layer absorbs the fluid and locks it in and the bottom layer is your waterproof protection so you don’t get any embarrassing leaks.

Colours are fairly limited but there’s a fantastic range of styles, from lacy pants to bikini bottoms. And there’s also a high-waisted version coming too! 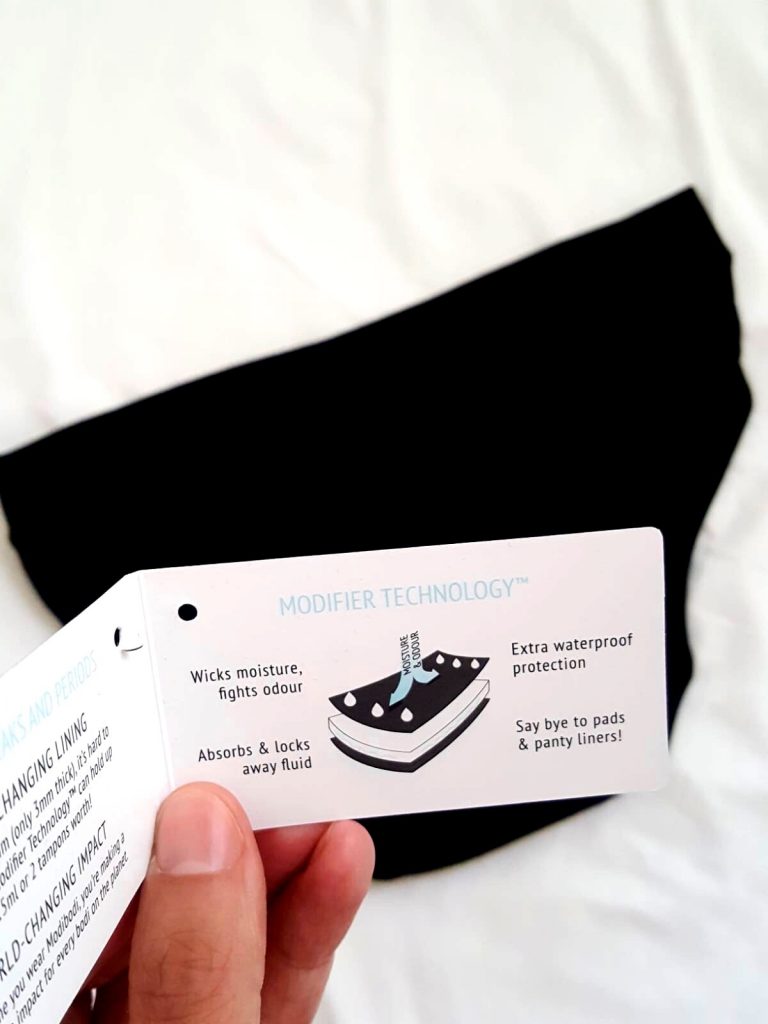 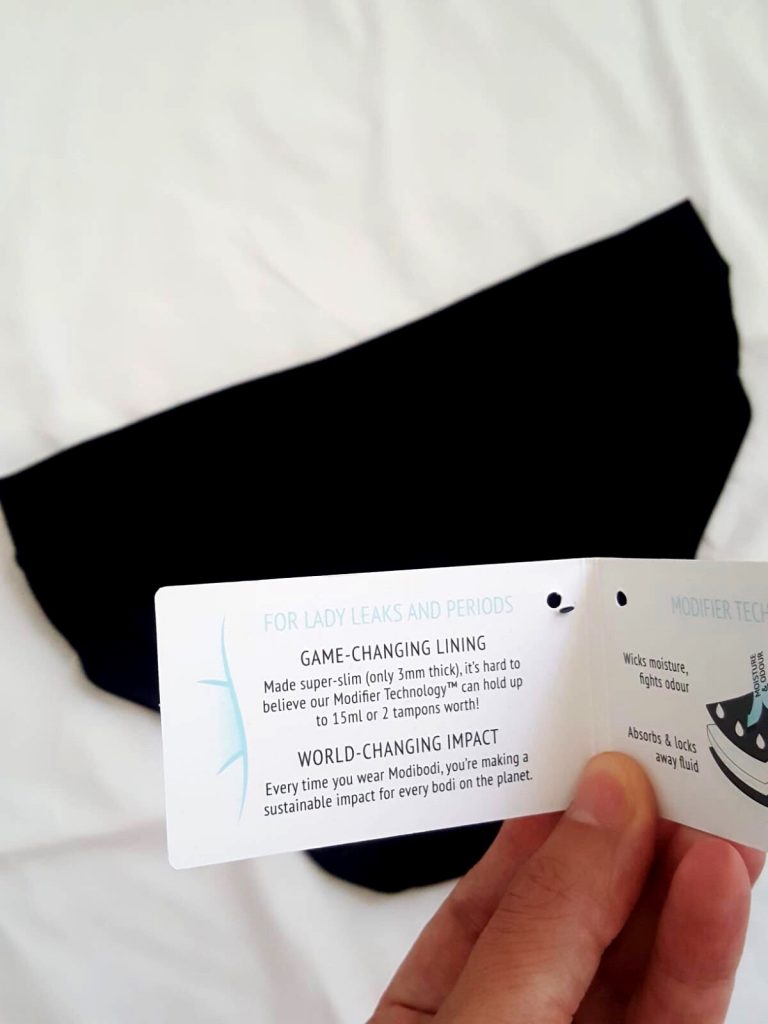 I wouldn’t wear these for the whole day on heavy bleeding days (probably maximum 4-6 hours), but they were super comfy and didn’t leak at all. It was nice to be able to go out without having to worry about carrying tampons and pads with me and I felt rather smug that I was doing good for the environment. I’m going to get myself another couple of pairs! Although which style I’ll go for, I don’t know… there’s so many!

Who for: Environmentally conscious women
How much: The Maternity briefs cost £18
Where from: They’re currently only available from their online shop
Website: modibodi.co.uk