What do you get when you combine Pilates and Yoga? PiYo, the latest release from the Beachbody group that brought Insanity and sweat to living rooms across the world. Created by Charlene Johnson, a personal trainer and mother of two, it’s fuses the toning from pilates with the flexibility of yoga. And best of all, it promises that there’s less risk of injury. 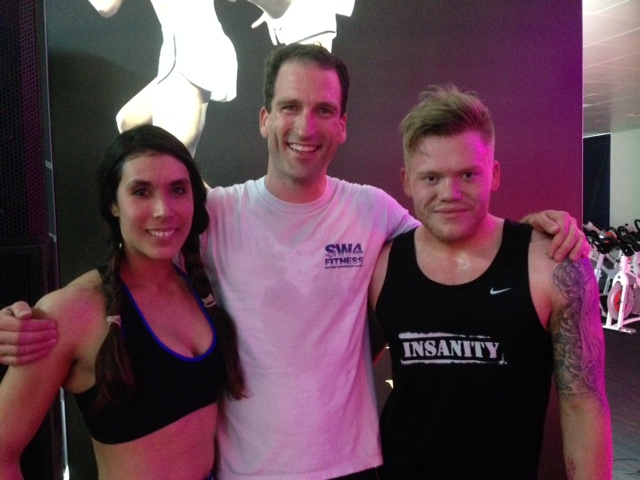 A rather sweaty selfie; Eliza Flynn, Paul Finch of SW4 Fitness and Rob Myers-McLaughlin from BeachBody

Personally I love Insanity. My other half and I bought it for ourselves as a Christmas present a few years ago but within the month, he’d got an injury and it’s something I see a lot. When you’ve got people, often new to this type of exercise, leaping straight into something as intense and high impact as Insanity without any supervision and correction of form and without a solid foundation injuries aren’t uncommon. So PiYo seems like a great alternative for those who still want results but without the injuries. For a start, there’s no jumping about.

There’s obviously only one way to see if PiYo is the real deal, after all, even though pilates and yoga can bring on quite a sweat, could it really burn 1000 calories as promised in an hour? I put it to the test, at the very first live UK PiYo session at Be:Fit London. Led by Rob Myers-McLaughlin, alongside Becki Gerrard and Will B, the Beachbody crew cajoled, shouted and danced their way through the session. It was a bit like being part of a show and they were performers, rather than just there to instruct.

The 30 minute class is broken up in to different sections, each focusing on different elements such as agility, strength, flexibility etc. For anyone who’s familiar with Insanity, it’s similar. To be honest, I wasn’t expecting such a workout. I really wasn’t. It’s as though some mad fitness Frankenstein has smashed yoga and pilates together and ramped it up several notches, injecting it with copious amounts of non-stop sweat and burn. For sweat you will and as for the burn, well…! The choreography requires some degree of co-ordination but PiYo cleverly builds up the moves to ensure that no set is too overwhelming. And it’s a full body workout, combining arm strength with core and legs, through a series of pulsing squats, lunges, kicks and planks.

I was pleasantly surprised by PiYo. For anyone who thinks it’s going to an easy workout, think again. It feels less crazy than Insanity and slightly more civilised. There’s nothing new or innovative about the individual moves, but the the Beachbody workouts aren’t about that – they’re about getting people results in a fun, yet demanding way. And PiYo does just that – I can really see this appealing to those who are put off by Insanity yet still like the idea of it.

Want to try PiYo in London?

SW4 Fitness is the first to bring PiYo to London!

How long? 30 minutes
What to wear: Something you can stretch in. Short shorts, not advisable. Sports bra useful.
When? Tuesdays 7.45pm
Where: St Peter’s Hall, Prescott Place, London SW4 6BX
How much? £5 (bargain)