One of my favourite quotes is “Those who don’t make time for their health will sooner or later have to make time for illness.” Unless we actively put down the foundations for a healthy lifestyle, we’ll ultimately pay the price later in life. This is all very well talking about, and we can eat all the kale in the world, turn into yoga bunnies and meditate often but is there a more scientific way to determine our health levels? According to Thriva the home blood test kit, yes! 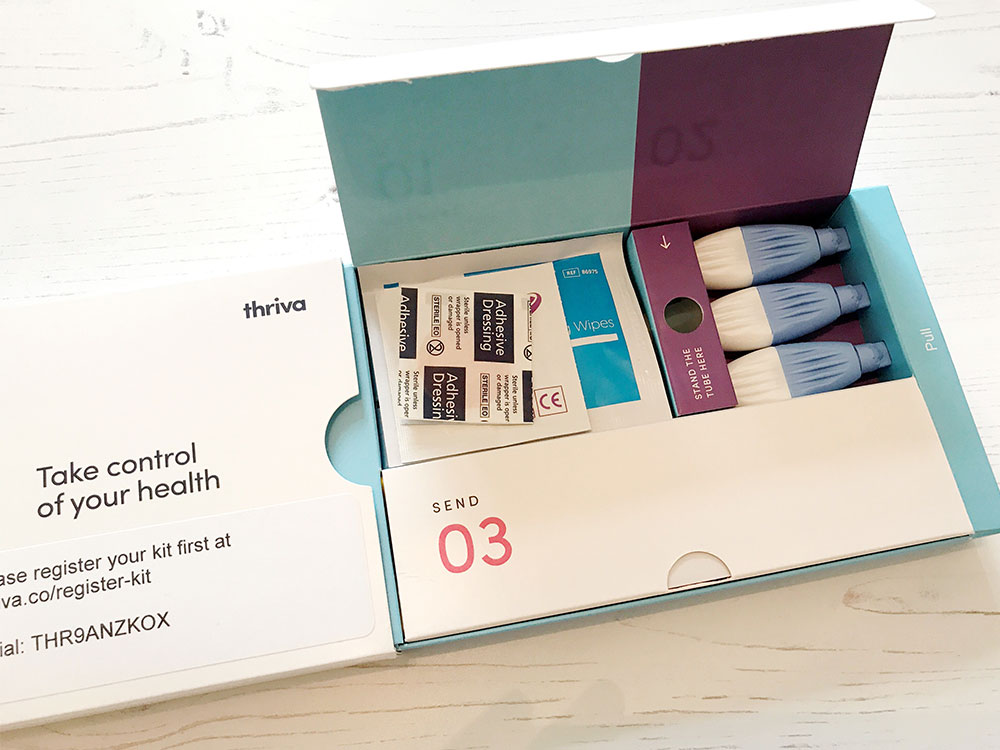 I’m not sure about you, but I have days, and sometimes weeks where I feel like something’s not quite right. I can’t put my finger on it, but it could be feeling a little tired even after a good night’s sleep, or just a bit ‘meh’. Look in my cupboard and I have an arsenal of vitamins which any health food store would be proud to stock, but here’s the irony – I’m not sure what I need… We get told to increase our Vitamin D intake, especially in winter, and to make sure we get our Omegas in, and if you’re pre or post-natal (like I am), the advice is to take folic acid. I’ve also got glucosamine, a bottle of women’s health vitamins, ones to help brain function (thanks dad!), multivitamins, iron tablets and that’s just the ones in the first row.

As a new mum, I want to make sure that I’m as healthy as possible, yet I don’t have the time or the energy to get down to the doctors and I’m also not sure what they would suggest – past experience has taught me that blood tests and specialist referrals take weeks, if not months to happen. Until recently, it’s been hard to take matters into your own hands but that’s where Thriva comes in. They offer several different kits which you complete at home and send off. Within days, you receive your results; it’s a lot quicker than at the doctors! On the flipside, it will cost you and you will have to take your blood yourself…

So can a home testing kit offer me the reassurance I need that I’ve got my health under control? It was time to find out! Thriva has three different tests:

I was gifted the Baseline to try which costs £49. Upon receiving the test in the post, I used the individual code on the pack to register an account and add in details such as height, weight and sex. So far, so easy. Then, I opened the kit. I’ve taken blood before using the finger prick device but I’ve never had to fill a whole vial! Ok, so this vial was about the size of the top of your little finger, but it seemed to a hemophobe like me (someone who has a phobia of blood – or is it more accurate to call me a Trypanophobia – someone who has a phobia of needles? Having said that, if I were to label myself, it would be someone who has a fear of causing themselves pain through self-stabbing with a sharp instrument but I’m not sure the word exists…) In order to fill the vial, there wasn’t just one finger prick device, but THREE! Have you ever used a finger prick device? They’re pretty simple –  about the length of a matchstick and a centimeter wide, you place one end of it against the pad of your chosen finger and click the other end – this releases a sterilized needle which pierces the skin. For this test, they advised warming up the hand you’re looking to do the fingerprick test from with warm water so it’s easier to squeeze the blood out.

Once the vial is filled, you pop it into an envelope along with some details, stick it in the pre-paid bag and post it in your nearest letterbox. For me, the only challenge was rustling up enough courage to take it! However, the Thriva team are on hand to help and were regularly sending emails of encouragement and advice.

The results are in

I received the results within a few days by email and was able to view these in my online account. It’s worth noting that by the time I ended up taking the test, I had had my little one, so some of the doctor’s comments may be slightly skewed. 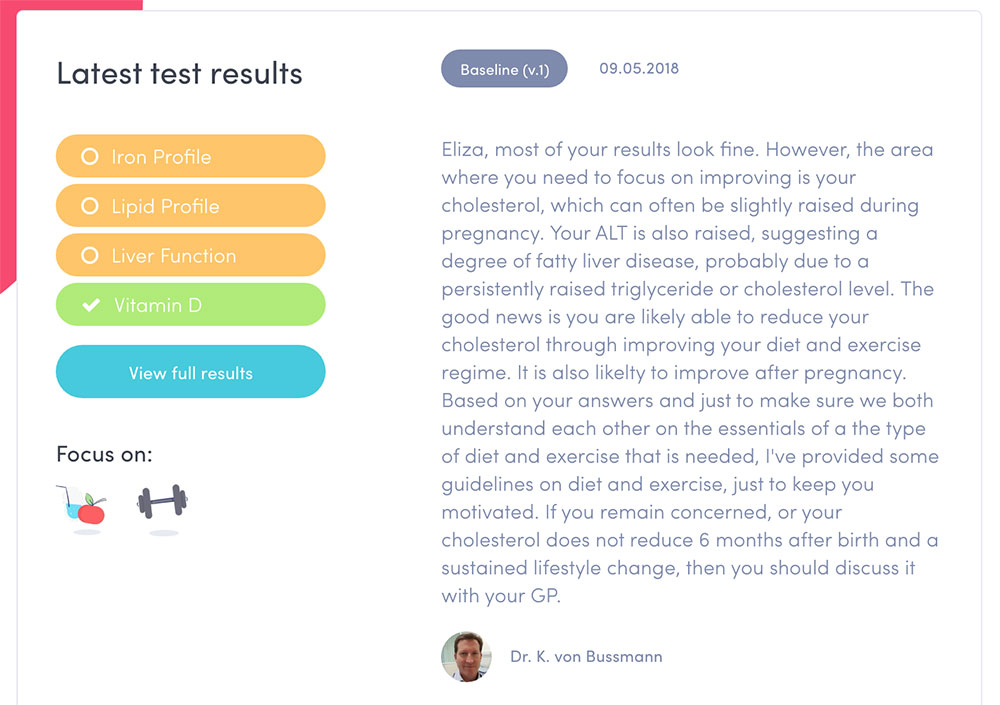 My thoughts on the results:

Bear in mind that I’m not a doctor and don’t have any nutrition qualifications – these are my own thoughts.

I’m not surprised these was borderline on the low side. I have been taking Floradix, an iron supplement, occasionally but not regularly and also had a strange craving for red meat recently (mainly Five Guys burgers), which is most unusual as I’m normally pescatarian, if not vegetarian. Plus, I would have been losing a fair amount of blood through lochia, post-partum bleeding. I have a history of teenage anaemia (mainly down to the fact I decided to go vegetarian but had no education of how to eat a balanced diet) which was severe enough for doctors to consider a red blood cell transfusion. 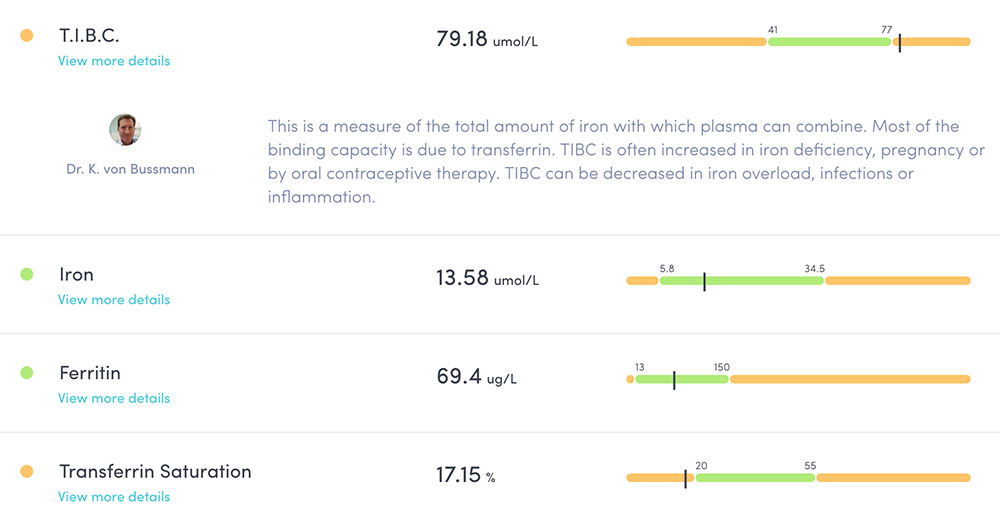 I’ve got a history of high cholesterol in my family so I’m not too surprised by this. It does reinforce that I have to make sure that I alter my diet somewhat to try and reduce my LDL (bad cholesterol) measurements as it’s borderline high. I have also taken into consideration that cholesterol can be raised during pregnancy, and also that I’ve increased my intake of red meat and dairy (notably Greek yoghurt) in the last trimester. 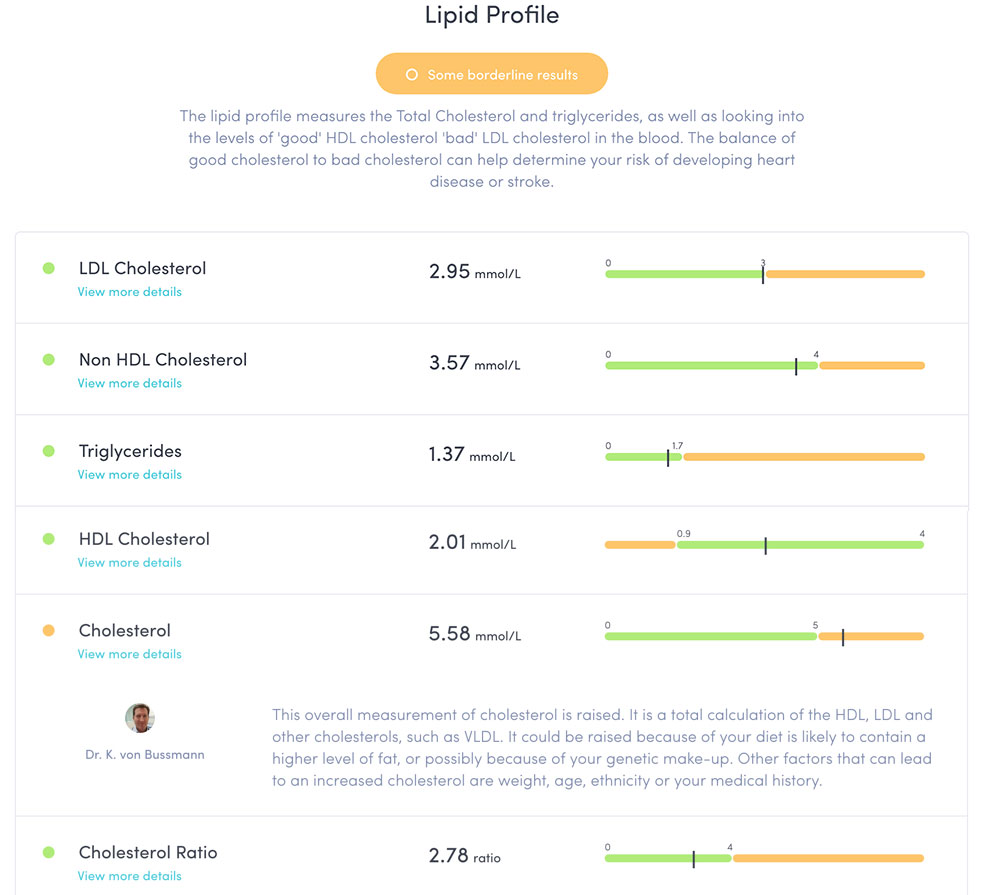 Results came back as having raised ALT and Albumin levels which can be indicative of fatty liver disease. They say that inflammation can cause this and I wonder whether my chronic eczema is either the cause or the consequence of it. Recommendations are to decrease my fat, cholesterol and processed food intake. 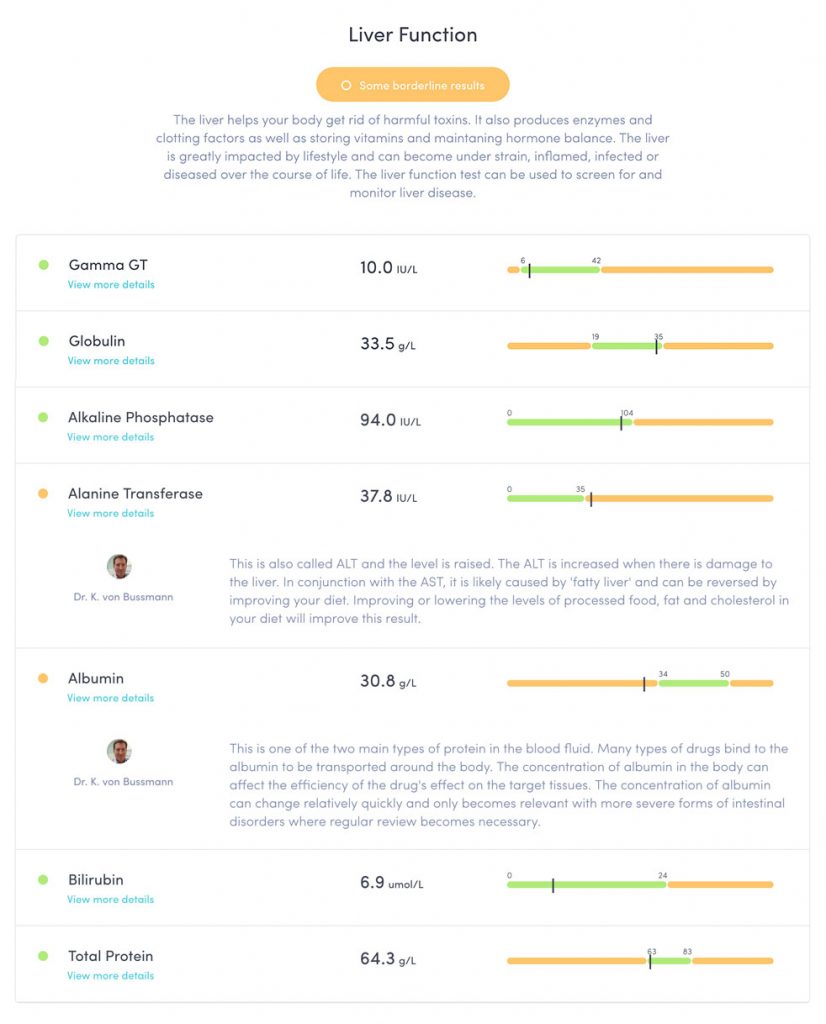 I was just in the normal range for vitamin D levels. I’m sure this has been boosted by the pre-natal vitamins I’d been taking and also maybe with the short time we spent in Tenerife (despite us having rain for 5 out of 7 days we were there) towards the end of my pregnancy. I was worried this would be low as we’ve had such a long and miserable winter! I’ll be keeping up with my vitamin D supplements and trying to get out in the sunshine now that the weather’s brightened up.

I couldn’t find my results for this in my dashboard and am currently waiting for feedback on this.

I really liked how you had a personalized summary with clear advice from a real-life doctor. Some of the comments further into the results were generic comments, but for a relatively low cost test, I appreciated the personal touch – this was definitely of value to me. I also thought that the information given was relatively easy to understand and well-explained which makes it accessible to people with no medical training like myself. The further you click into the results, the more information you get. It was also useful to have clear advice on what changes to make to improve health. For me, however, they advised on improving my diet (which is fair point – I am the first to admit it had gone a little wayward) and exercise, which I felt I’d been doing a fair amount of, considering I was pregnant!

To have these tests done privately would be significantly more expensive and time-consuming. On the upside, you’d have access to a doctor who could answer any questions you might have, and they would be taking venous blood which some consider to give more accurate results, although Thriva assures otherwise. For the price it is, I feel like Thriva offers a useful, low-cost and convenient option for those who want to take responsibility for their health; the Baseline test gave me a clear snapshot into some of the important health markers and sound advice for improving my health going forward. As suggested by Thriva, it would be beneficial to regularly take these tests and I’d be interested to see how my results change post-natally in a few months time after implementing the suggested diet recommendations.

Who’s it for: Best suited for those who want to keep an eye on their health and prevent health issues before they arise.
How much: The tests cost from £29
Website: thriva.co