So you have heard the hype about Tough Mudder – 12 miles of gruelling running interspersed with 20 obstacles including electrocution, ice baths and not unsurprisingly, a lot of mud. After damaging my knee and wanting a goal to train for, I signed up for Tough Mudder and convinced four of my friends to do the same. This is the story of how team “Muddy Tough People” got along! 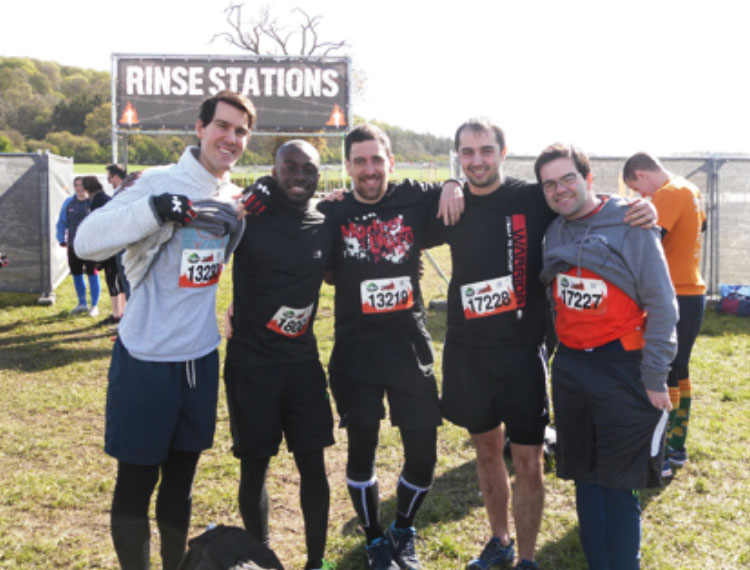 The Tough Mudder experience starts as soon as you arrive on the day – even before you start to race the constant blaring of music and the chatter of the MC keeps the atmosphere at a party level. Even the check-in feels like the first obstacle with everyone rammed through ten check-in areas.

Our team found each other even through the throng of people, and after a few stretches and a warm-up we were off to the start line for our 10 o’clock starting gun.

Once we negotiated the warm-up area which consisted of a few star jumps, some twists, funky music and shouting “hurrah!”, we approached the first obstacle with ”I will survive” still ringing in our ears. My team was pumped and ready for the race, jogging and overtaking a few people to clear some space amongst the throngs of people. However, upon clearing the first head-high wooden fence, we were greeted with a sign that said “start” then realised we hadn’t actually even begun the race!

The next five minutes was made up of more music and then the Tough Mudder pledge;

As a Tough Mudder I pledge that;

– I put teamwork and camaraderie before my course time

– I do not whine, kids whine

– I help my fellow mudders complete the course

– I overcome all fears

We wouldn’t find out until later on how true all of these statements would turn out to be.

After a round of hi-fives the ten second count down was upon us and the race would finally begin; all the months of training or not so in some cases our course would begin.

Zero was hit and the “Muddy Tough People” started, all saying that we would run until the first of us started to slow – we started as a team and would end as a team. The first mile went well, and we managed to clear some distance from the main crowd making it a lot easier to tackle the obstacles.

The first obstacle was a crawl under barbed wire (keeping low was the key) but it turns out I knew a quicker way and consequently nearly ripped my shorts off! I didn’t get it as bad as some though – one of the competitors had to run the rest of the way in his boxer shorts! Just beyond the barbed wire was a big sign – “One Mile Down 11 to Go” – not helpful sign, not helpful.

As we ran, the banter flew and luckily so did the miles, getting to mile four with relative ease, with an obstacle every half mile or so. Having done numerous hill runs and a piggy back, one of the team piped up and said “It’s actually getting really hot now, I could do with cooling off…” Famous last words as the next obstacle was an ice bath!

The Arctic Enema was very straight forward; climb a ladder then slide in so backing out is not an option. Two by two we lined up hitting the ice with a scream, no time to think of anything just get the heck out of there. I got out of the bath in record time – I don’t think have ever swam that fast! 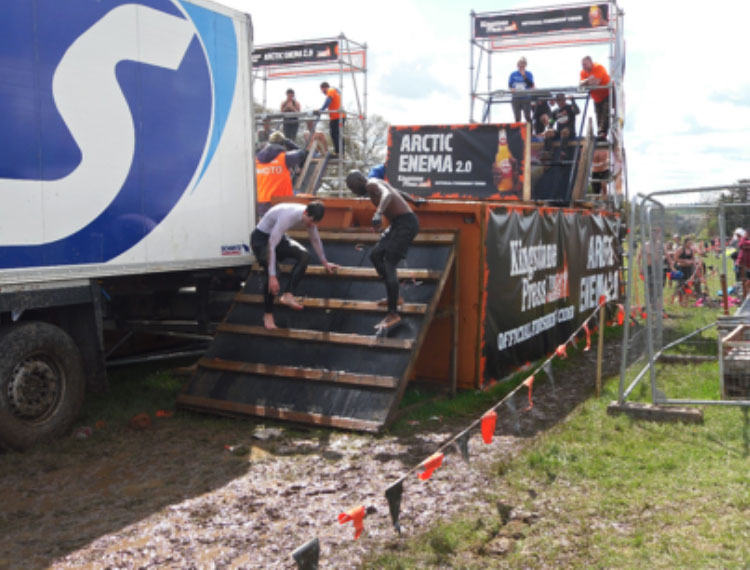 While surprisingly refreshing, we warmed up by jogging on to the next mile where we were met by another hill, at which point my knee started to ache which wasn’t a great sign.

Head down and with the team keeping me going, we conquered numerous obstacles, hitting mile 6 without incident, though then my knee really kicked in – darn those hill sprints! I wasn’t the only one feeling the pain though, with the other team members feeling a calf injury and a pulled shoulder. Like the walking wounded we soldiered on.

The next big obstacle was Everest 2.0, a run up a 10 meter half pipe. As you have to rely on being ‘caught’ by friends, there was no way you were doing this one alone! Two of the team went ahead getting up first and being the competitive type I didn’t not want to make it to the top so I put my head down and gave it a full sprint. My legs were like lead after six and a half miles so it was a struggle to get enough power to get halfway up and hope my arms were long enough to grab my friend’s hands. It’s lucky I am 6’2 otherwise it would have been a long slide to the bottom of the half pipe! This was one of the highlights of the course, the team element really came in here and we helped a few people up shouting encouragement and working together to get people up. 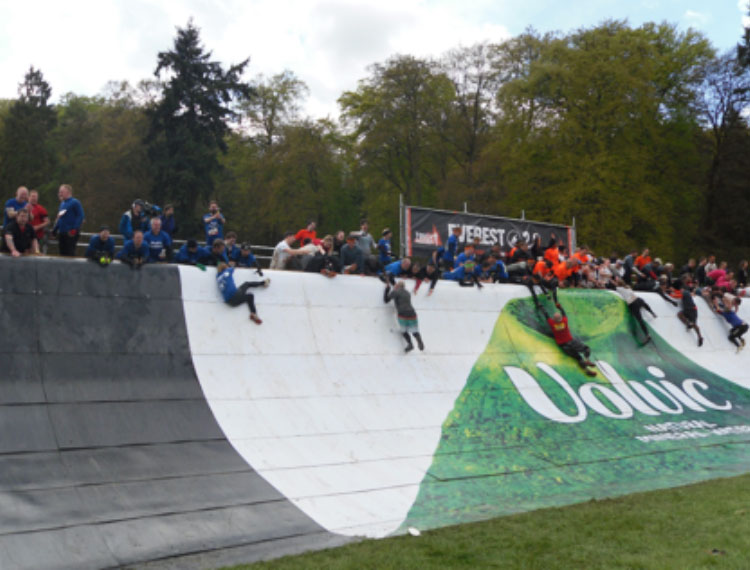 The next five and a half miles were tough, having blown my knees out sprinting and having to walk the rest of the way. The team element really came in again here with everyone else going at my pace and everyone keeping each other going as we faced walls of mud, rope swings, wall climbs, plenty of ice cold water and crawls through tunnels. By Mile 12 we were all feeling totally exhausted, but were ready to face the final obstacle – the electro shocks! Having been building this up all day, we expected body-jolting shocks from the unavoidable wires hanging down from the wooden cage and I was a little disappointed as it turned out to be the easiest obstacle we did all day – I walked through without getting a single noticeable shock!

We all fell across the line in just under four hours all with grins on our faces and bodies aching. 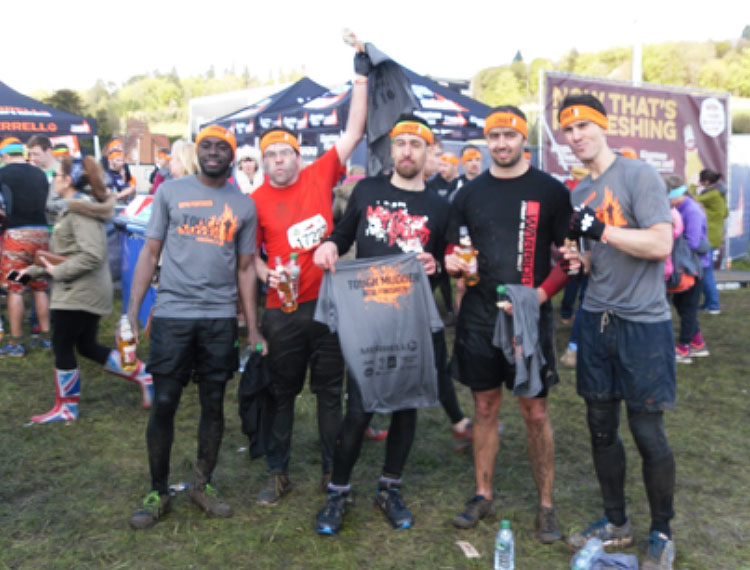 One thing you learn about Tough Mudder is that your finish time doesn’t matter; as the pledge said at the start, it’s not a race, and that was very true – it’s an experience.

What did my tough Mudder experience teach me?

Would I recommend it?

Totally – Tough Mudder was such a great experience, it showed me how deep I could go into my reserves and it challenged me physically and mentally in a way I hadn’t been for a long time. It’s such a fun day with so much going on around the park as well as the race and everyone is up for the challenge.

Would I do it again?

The number of people who walked around with 10 or 20 headbands showed me how addictive it really could be. Realistically, until I get my knee sorted out, I don’t want to run 12 miles again. That said though, my next race will be a Half Mudder. From that I am going to do the full one again in a year or two.

Is the race for you?

If you enjoy playing about in the mud, climbing trees or want a fun way to keep fit then give it a go – it’s an experience not a race and you can go as fast or slow as you like. I saw a range of people from young to old, from gym-ripped to desk-bound who took part, so fitness or age is not an excuse – it really should be on everyone’s bucket list! I personally made myself more accountable by running for charity and if you want to donate to the British Heart Foundation please feel free to do so here >

To find out when the next Tough Mudder is taking place, visit their website.

Simon works in property, has written his first eBook, and took part in Tough Mudder for the challenge and to raise money for British Heart Foundation. You can donate here >