Verve ONES+ are one of the first cordless earbuds on the market. And I got to try them. Now, you may ask, surely corless earbuds are already around? AHA! That’s what I thought too… but when they say ‘cordless’, they mean cordless. We’re not talking about the headphones which are just a headphone set and you can hang them round your neck – that’s cheating. These are actual separate earbuds. Two earbuds. Not one. 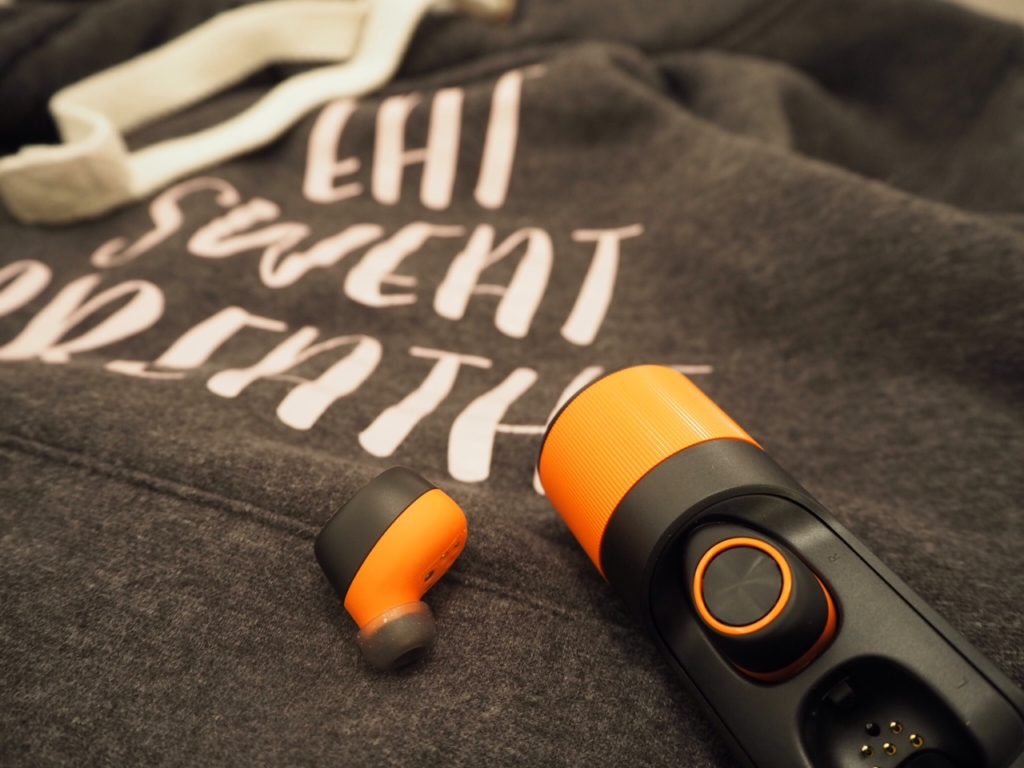 What makes them the first of their type on the market is apparently (and this is me trying to relay what was I told so excuse the lack of technical terms) their ability to ‘talk to each other’ across the skull. Using innovative technology (and hopefully without frying my brain – I need all the brain cells I can get!) the left earbud talks to the phone, whilst the right earbud connects to the left.

To start with, I wasn’t sure what the benefit of having two separate earbuds would be. After all, there’s benefits aplenty as the Verve Loop+ Wearable and the Verve Loop+ Rider show. I know from experience that especially when I’m doing park workouts, there’s nothing quite so frustrating as trying to work out where to put your phone when you’ve got normal earphones in and you’ve got burpees coming up (I usually ended up stuffing my phone down my bra but no one likes a sweaty phone…). But really, separate ear buds? 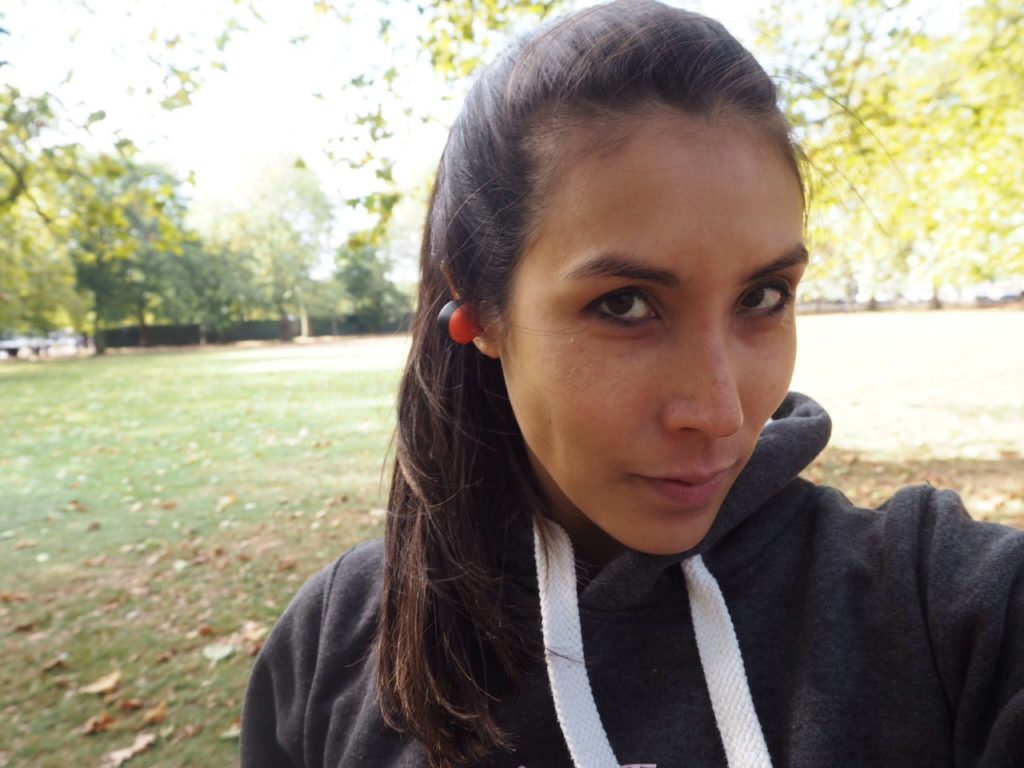 Showing off my new wireless earbuds.

It wasn’t until I actually tried these out that I had my ‘aha’ moment. Early one morning, with Hungry Bear safely (and unusually) sleeping in his buggy, I did one of my first workouts since getting my 6 week post-natal sign off. Just for fun, I included some burpees and also did some crazy head swinging, just to see if I could knock these babies out. I couldn’t (I had to try out several different ear bud sizes before I felt comfortable putting these through their paces as with the smaller ones, they felt too loose). The best bit was feeling so free! Unlike a headset, I didn’t have anything banging against the back of my skull during my overenthusiastic squat jumps and the sound quality was amazingly clear. It perfectly blocked out the sound of high-pitched squabbling kids on the way to work and kept me in my little sweaty zone. Oh, and did I mention that no matter if you’re Sweaty McSweatFace, the Verve ONES+ are also waterproof. Yes! Another massive bonus.

I’m often excited by fitness technology but these are top of my list of one of my favourites. I love listening to podcasts over music when I workout (yes, I know, that’s a little odd apparently) and these have made my workout experience so much better. Goodbye annoying wires getting in the way when I go running and goodbye not being able to hear the podcast properly – the clarity on this is top notch. As well as listening to music and podcasts on your device, it also allows you to listen to calls clearly two with its dual mics. And if you’re that kind of a person, it is also Siri and Google compatible.

As much as I love fitness tech, getting started is always the bit which I dread. I’m just not that confident when it comes to technology. My biggest fear for these were that I’d somehow have to do something fancy and sync it to my laptop and then transfer files over but the reality was a thousand times better. You plug it into your laptop or a USB plug adapter to charge it and then sync it to your phone via Bluebuth. TO YOUR PHONE! You barely need your laptop at all!

It also lasts for ages – playtime is up to 12 hours, charge time is a few hours – and my favourite bit is that the charger has a twisty sliding cover to keep them safe and to stop them getting knocked out, thereby doubling up as a case. Furthermore, if I need to keep an ear out for any movements from HB, I can always just keep the left earbud in and have my right ear free; something which you can’t do with any other set on the market.

My one concern is that I’ll lose one, or both! They’re quite chunky but unlike having one headset to lose, I’ve now got several elements – the lead to connect it to the laptop or plug, the charge case and two earbuds. Worse yet, is if I lose the left earbud as that’s the one which connects to my phone. But wait, it turns out Motorola has also got that covered. Download their Hubble Connect app and it will let you know where they were when you last synced them.

At £299.99 for a set, these aren’t cheap. However, if it’s important to you to listen to music (or podcasts) whilst you work out and you work out often then these have to be the ultimate solution. And they’re not just for workouts; I tried them out on the tube and even though I got a little sweaty, they were absolutely fine and for the first time ever, I could actually hear my podcast without having to massively turn up the volume.

The Verve ONES+ are available online at verve.life and retail at £229.99.