Alexandra Park BJJ is a Brazilian Ju Jitsu club, headed up by Gavin Lewis, situated in the heart of North London. It’s a small and friendly club, an affiliate of the renowned Nova Geração and BJJ Revolution teams headquartered in Rio de Janeiro. Having had much experience fighting wayward boys as a child, Eliza went to check it out, along with Carly from Project Hot Bitch and Pennie from Oh My Quad. 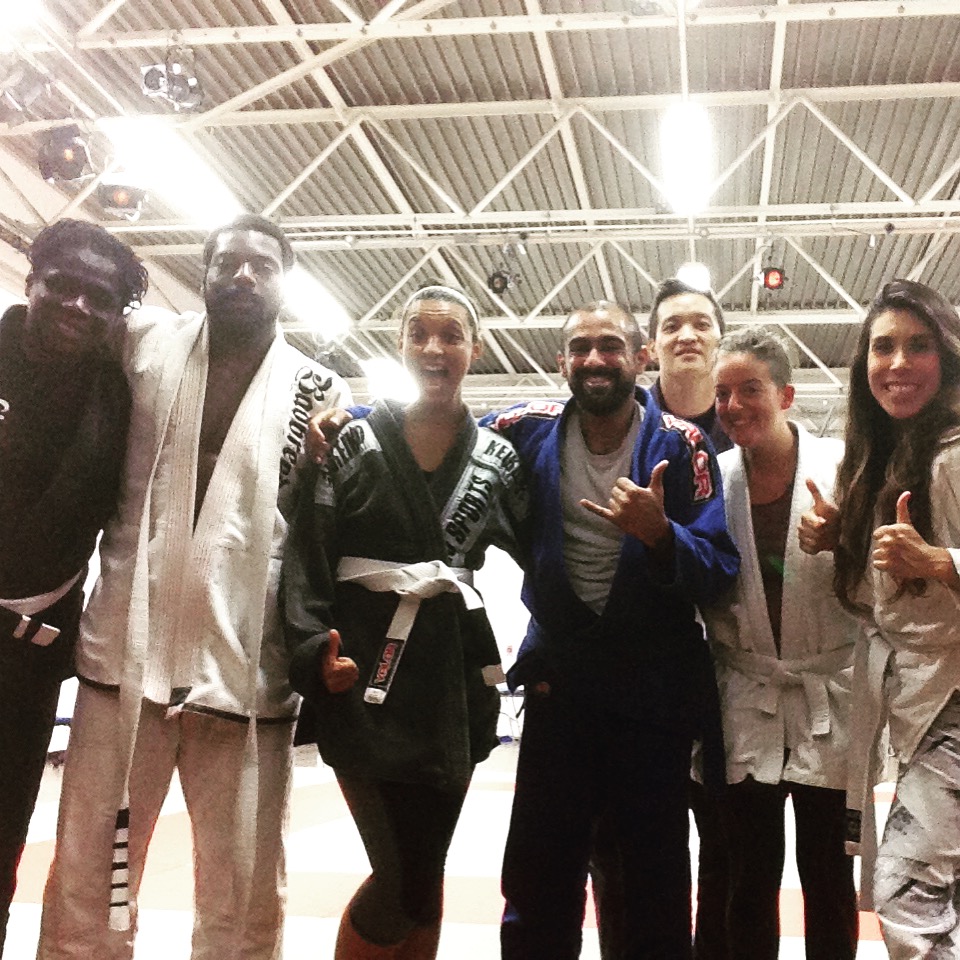 All endorphined-up after a sweaty session.

My hips are thrust so high in the air, I think I’m going to get cramp in my bottom. But that’s the least of my worries. I’m also trying to manipulate Carly from Project Hot Bitch’s head into my crotch so I can choke her with my thighs. No, this isn’t some kind of sordid S&M session, it’s Brazilian Ju Jitsu. By this point, Carly’s hair is all over the place, I’m grunting and she’s getting red in the face. It’s hard to tell when you’re trying to choke someone with your thighs when you’ve actually got it right. Oh wait, they’re supposed to tap to signal they’ve had enough. In theory this works, but when hands and arms are tangled up at impossible angles, risk of proper choking is high. Sorry Carly. That was a description of the triangle, a pretty punchy choke hold that involves cutting off the blood supply at the carotid artery with their arm and your thigh.

Let me start by saying, BJJ isn’t for the shy or easily embarrassed. When you’re starting out, the usual combat positions are with one person in guard, lying on their back with their legs wound tightly around their opponent’s hips. It’s a pretty cosy position to get into with someone you met a few minutes ago. As a woman, you can feel a little powerless, especially if your opponent is a larger, stronger man. However, it is also something that I wish was taught more at school – the skills you learn are essential. It teaches you to wriggle from someone’s grip, how to break someone’s hold on you, and techniques to immobilise opponent’s joints. 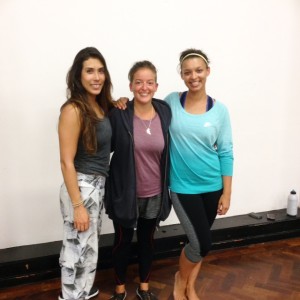 Eliza, Pennie from Oh My Quad and Carly from Project Hot Bitch.

This is the sort of thing I love! I had done 3 months of BJJ 6 years earlier but gave up when I moved flat and sustained a knee injury. It was great to be on the mat again. I was surprised at how much I’d forgotten and whilst one lesson wasn’t enough for it all to come back, it brought back lots of good memories.

The warm-up was hilarious. Carly got the giggles at the ‘shrimp’. A movement that closely resembles a kidnap victim with their arms and feet bound together trying to escape. You start by lying on your back, knees up and feet close to your bottom with your arms bent in front of your face. Rolling onto one side, legs are extended, using the floor to push from, thrusting hips out to the side. At this point, you’re pretty much lying on your side. Your knees come in, you return to lying on your back and the movement begins again, this time thrusting your bottom out to the other side. It’s the strangest feeling thing ever but works your core something special. Each warm-up exercise included movements we’d be using in the lesson, from gorilla walks (where you swing around on your knuckles, mimicking the hand positions you’d use in a choke), side shrimps, spiderman walks and forward and backward rolls. They were all types of movements we rarely utilise in our everyday.

Fahed Rahman, who was covering the class in Gavin’s absence, had us practice some basic moves – a variety of chokes through to getting out of someone’s grip. There’s a lot of understanding about the human body required, especially around how joints bend. And don’t bend. As we discovered during an arm bar. It’s takes quite a lot of skill to be able to remember the different moves and also work out what will and what won’t work. During a controlled sparring practice, I got a little overexcited / frustrated and decided to grab an eye instead. Apparently that’s not in the rules. Sorry Michael. Thank you being so nice when we sparred. And for not beating me up.

Watching the experts spar, to the untrained eye, it’s sometimes hard to see what’s actually happening – there was a lot of slow, deliberate movements as positions were shifted and advantages were gained an inch at a time before a flurry of movement happened and like a puzzle, the combatants grasped each other to them and closed up. 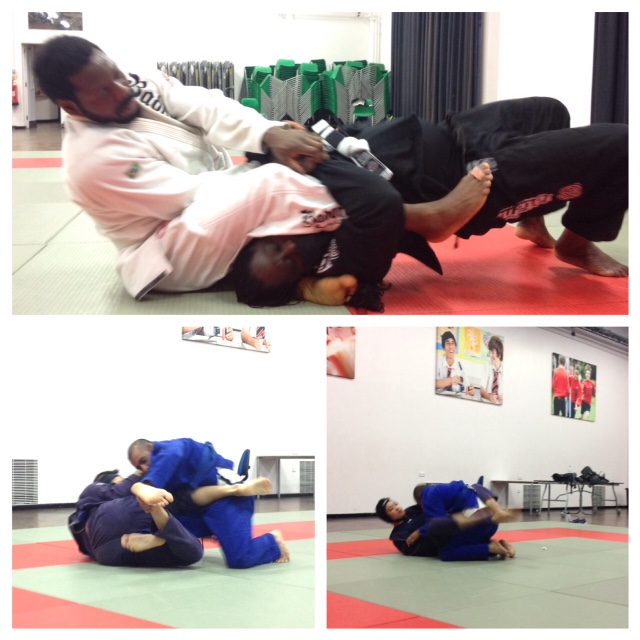 BJJ is a sport that I think has such benefits for men and women. For a start, it gets you incredibly fit, especially your core and regardless of body shape, you can be good at it. Plus, the skills you learn are essential – 95% of fights end up on the ground and for women, knowing techniques to wriggle free if you’re being pinned down or have your arm grabbed is powerful. Alexandra Park BJJ is such a friendly class that you can take it your own pace, learn it safely and also take it further if you want to; it’s not unusual for them to take part in competitions.

A bit more about BJJ

Brazilian Ju Jitsu is a martial art that’s very much a ground sport that involves grappling, self defense and works off the concept that regardless of size and strength, one can successfully defend themselves using the right technique, holds and leverage. Defeat is defined when the opponent is in a joint-lock or choke hold. It’s Japanese in origin and literally means ‘gentleness’ (ju) and ‘art’ or ‘technique’ (jutsu). Mitsuyo Maeda, a sumo fighter’s son, travelled the world challenging opponents to defeat him and left many fallen on his journey. Upon reaching Brazil, during a display where he fought many ‘giant’s, Carlos Gracie, a teenager was particularly awed. He learnt from Maeda and his brothers caught his enthusiasm for the sport. They opened the first Gracie BJJ studio 1925 and since then, the family have been teaching and spreading the sport around the world, from Mongolia to Alaska.

The Nova Gera Geração Ju Jitsu academy is one of the most respected and prestigious gyms in Rio de Janeiro, with BJJ heroes such as Roberto ‘Cyborg’ Abreu  and Alexandre ‘Pulga’ hailing form there.

Who’s it for? Did you ever wrestle with your siblings? Then this is for you. And also for those looking to get fit and learn how to look after themselves.
How much? £8 per drop-in-session, cheaper rates for monthly membership
Where is it? Classes take place 3 times a week at Alexandra Park School Gymnasium, Muswell Hill
Find out more: www.alexandraparkbjj.co.uk