After all of the indulgences of the Christmas period, January tends to bring forth a sea of good resolutions to move more, eat less and generally try to undo a month of mince pie and mulled wine-fuelled decadence. Riding on the back of this wave of good resolve are a shoal of new books, filled with wonder diets and tips on how to trim down and tone up in record time. In amongst this familiar January literary fare, I was pleased to be able to find a book that promised to be less about juice fasting and jumping on the latest fitness bandwagon and more about cultivating a healthy relationship with food, as well as considering its impact on our physical and mental health. 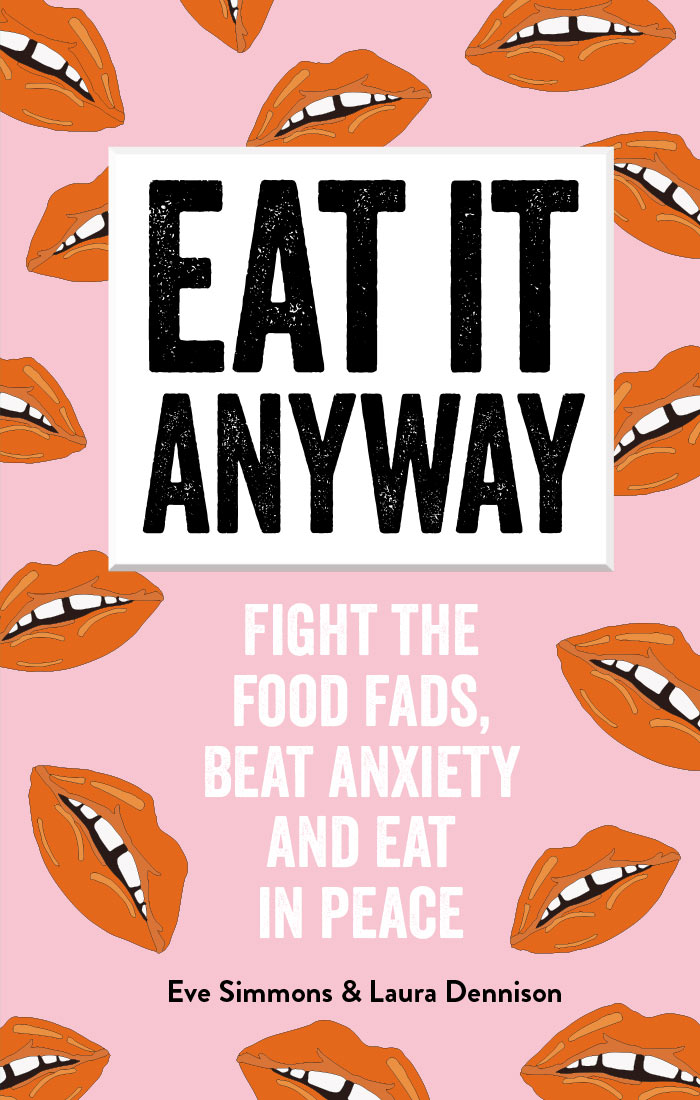 If you are fed up of Instagram pictures of avo toast, have no interest in starting your day with hot water and lemon, and are no longer sure whether carbs are meant to be the good guys or the bad, ‘Eat it Anyway’ could be the January read for you. In a book which claims to be sorting ‘the nutritional nonsense from the scientific fact’, journalists and founders of the ‘Not Plant Based’ blog, Eve Simmons and Laura Dennison draw on their own experiences of living with, and recovering from, eating disorders to reignite the joy of eating…without the guilt. Combining personal anecdotes, interviews, research and recipes from chefs, dieticians, doctors and psychologists, Simmons and Dennison consider the mixed messaging around food and the constantly shifting parameters that define what we should and shouldn’t eat. They also look at the role played by social media – in particular that of #fitspo Instagrammers – in influencing our attitudes to both food and our bodies.

The authors are candid about their own struggles with anorexia and bulimia, and offer workable advice alongside stories of their experiences. But the content isn’t just about eating disorders as narrowly defined diagnoses; the book explores disordered eating more generally as something that exists in people of all shapes and sizes. As the Susie Orbach, author of ‘Fat is a Feminist Issue’ observes in her interview with Simmons, ‘people don’t care unless you’re anorexic or very, very fat, but nobody measures the scale of eating problems for people who don’t show it physically’.

Beginning with breakfast, Simmons and Dennison advocate a hearty but healthy meal as a positive start to the day. They also caution against the morning weigh in, which, Dennison admits, for her led to a ‘fixation with numbers’ that contributed to an unhealthy way for her ‘to interpret [her] own body and health’. Other topics include ‘water’ – I don’t think I’m giving too much away by revealing that it doesn’t have to come from an expensive glass bottle with added electrolytes and fibre to do you good – ‘exercise’ – which comes with a reminder that  it ‘doesn’t have to be goal-orientated, performance-based or even remotely intensive […] if you lead a relatively active life, eat a normal, balanced diet and walk a bit more on the weekends, you’re probably doing enough’. ‘Diets’– covering everything from paleo to intermittent fasting. Here the best advice is to ‘do your research’; look at the credentials of the person giving the advice and remember that ‘if you read something about dieting that sounds like it’s too good to be true, it probably is’. ‘Fat’ – this section comes with the reminder that you can be fit and fat (and of course, skinny and unhealthy) and that the focus shouldn’t be on reducing weight but on improving health. Finally, ‘midnight munchies’ – which concludes that while late night eating might not be as bad for us as many articles would have us believe, it isn’t ideal, not least as if you are waking up in the night because you are genuinely hungry it is likely that you are running a calorie deficit earlier in the day.

Yet one of the issues I had with this book was that it regarded all of our dietary decisions – be they plant based or gluten free – as well as our decision to exercise, through the lens of weight loss. Perhaps unsurprisingly in a book written from the perspective of disordered eating, for Simmons and Dennison the main motivating factor for giving up food stuffs, be they meat or wheat, is the desire to lose weight, with all other factors – sustainability, GI issues, the environment, animal welfare, even just a preference for certain foods – playing second fiddle or acting as a veil for the real reason for exclusion i.e. to be skinny. For them, if you aren’t admitting to craving a bacon sandwich for breakfast and you claim that you actually want to go out for a run, then you’re lying to yourself.

Ok, so full disclosure here, I don’t like bacon. In fact, I’ve not eaten meat of any kind since I was eight and this was never anything to do with weight loss (indeed I’d be better served by giving up those big old dollops of peanut butter on my porridge every morning if I wanted to drop a pound or two!). I also bristle when plant-based eating is thrown in with other fad diets such as the Atkins or South Beach diet, something which this book does. For many people, myself included, being plant-based (or, dare I say it, vegan), isn’t about losing weight at all. I also feel uncomfortable with the idea propounded in the book that veganism is a diet that has been remarketed as a ‘lifestyle’ (their inverted commas not mine). A lifestyle is by its very nature diametrically opposed to a diet. It is about a wider shift in your attitude and way of being that is sustainable and long term, rather than a diet, which is a short term means to an end.

Given the above, it is perhaps unsurprising that I also struggled with the sections of the book on dairy and meat consumption. While this isn’t the place to reel off the reasons I don’t eat either of these things, needless to say, if you are well-versed in the research surrounding animal agriculture and the environmental impact of the meat industry (research which is conspicuous by its absence here), this book isn’t going to be for you (or at least I suggest you skip these chapters). On the flipside, the authors did concede that ‘you can’t argue with the science behind the importance of upping your daily intake of fruit and veg’, amen to that.

Diet is such a contentious and emotive issue. Sharing a meal is such a good way of bringing people together and yet disagreements over what we ought to be eating can so easily drive a wedge between us. Food is not only fuel; what we choose to eat is closely linked to our identity – whether that be defined by an ideology, our geography, family, or by tradition – and as such, any opinion that seeks to contradict our dietary preferences is often perceived as infringing on our right to express who we are and what we believe. Moreover, the science is far from settled over what is definitively good or bad for us in terms of the food we eat. While we are aware of the link between food and health, and while the field of lifestyle medicine is bourgeoning to counter the epidemic of chronic, lifestyle related disease, there is still no ‘one size fits all’ solution when it comes to our weekly menu. It is important to continue the conversation over food and nutrition and to remain open minded when it comes to what we put on our plates. As this book points out, it is all too easy to vilify (or extol) a particular macronutrient, food stuff or diet and in doing so we can lose sight of the bigger picture. While I don’t agree with all of the conclusions drawn in this book, I do think it has value in its critical assessment of some of the food myths and dietary research out there and, in the words of Simmons and Dennison, in its desire to ‘call bullshit on wobbly-science-based articles’.

‘Eat it Anyway: Fight the food fads, beat anxiety and eat in peace’ by Eve Simmons and Laura Dennison is published by Mitchell Beazley and publishes on 17 January 2019 and costs £10.99.

DISCLOSURE: I was given this book to review on behalf of Mitchell Beazley, part of the Octopus Publishing Group. All opinions are my own.

Lizzy is an editor and health and fitness writer. She grew up as a competitive swimmer and waterpolo player, trained as a lifeguard and swimming teacher, and is happiest when slightly chloriney! After moving to London she became a (mid-pack) runner and ran her first marathon in 2015. As a new mum she is currently working to see how compatible motherhood and marathon training really are! She is a vegan and is raising a plant-based baby girl.