Earlybird is a new snack delivery concept that aims to provide healthy nibbles for busy people in easy to carry, convenient snackboxes. Each Earlybird snackbox fits through the letterbox and contains 4 snack pods and one tea. So what did a trainee gourmet chef, a bride-to-be, a PT and a writer who is on the hunt for that ‘healthy glow’ think of them? 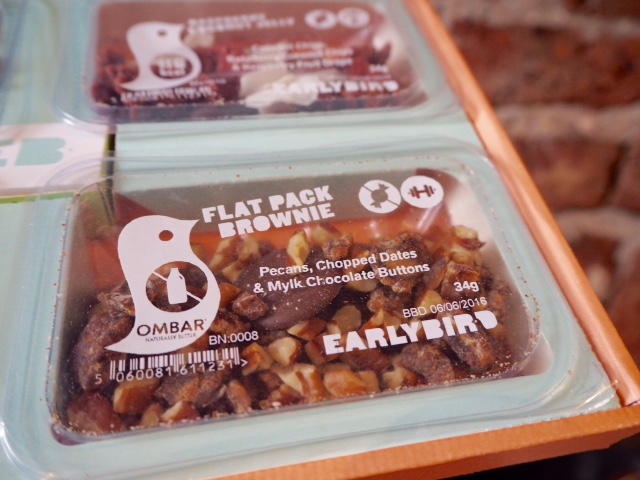 With options for vegan and vegetarians, including the delicious-sounding flat Pack Brownie (pecans, chopped dates and Ombar mylk chocolate buttons) and Everygreen Garden (freeze-dried broccoli, peas and sweetcorn – unusual, right?!) there are options to suit everyone, from the strict fitness foodie to those who just want to know that what they’re eating is a whole lot better for them than what they’d usually have. Indeed, part of what Earlybird’s ethos is about is to provide good snacks so there’s less snacking on bad snacks.

Each of the snack pods comes with a little badge to give you a quick overview of what they’re about and why they’re good for you. For example, the Wheatgrass is Always Greener box (wasabi wheatgrass kale chips) has a little weights symbol to show it’s a source of protein and a trophy with wheat stems symbol to demonstrate it is also high in fibre.

Packaging-wise, there’s lots of cute pastels going on which makes us think this is going to immediately catch the eye of the women! Good news is that it’s all recyclable too.

Amy, Eliza, Hannah and Susie all got a chance to try an Earlybird snack box and here’s what they thought about them:

Amy’s verdict (bride to be)

My first thought was that Earlybird is a very similar concept to Graze – but Earlybird has a focus much more suitable for my lifestyle, as if I am going to snack I want to snack as healthily as possible. It’s good to know that with an Earlybird subscription the palettes you get sent are always going to be refined sugar free and have no artificial preservatives or sweeteners.

The selection I was sent contained ‘Nuts about Ella’ (blanched hazelnuts, mulberries and Ombar chocolate buttons), ‘Mangoco’ (mango bites, coconut and pumpkin seeds), ‘Cho-kale-et chips’ (cacao and cinnamon kale chips) and ‘Shmokin Peas’ (smoked coconut chips & roasted green peas). I honestly thought all of them were lovely (I didn’t actually try the kale chips myself as I can’t eat kale but I have on good authority these were also very tasty) and I was really impressed that each of the snacks were interesting as well as full of flavour – no boring mixtures here! The ‘Nuts about Ella’ was probably my favourite as I am a massive sucker for anything with raw chocolate! The Shmokin Peas were also delicious – I’ve noticed the market is filling up with flavoured coconut chips but I hadn’t tried any before and really liked them.

My overall thoughts – if you are a snacker then Earlybird would work really well for you as not only does it have tasty, inventive palettes it is healthier than most out there and will help you keep your portions under control (we’ve all been there… when you intend to have just a handful of nuts and suddenly the whole bag is gone!)

I’ll admit, I used to have a Graze subscription which is very similar to Earlybird and I chose the healthiest snacks I could. However, I didn’t find my selection appealing and so a lot of the boxes went to waste. I really like the Earlybird selection I’ve been sent so far – I’ve got Wasabi Wheatgrass Kale Chips, Raspberry Coconut Jelly (which contains coconut chips, raspberry coconut chips and raspberry fruit drops!), Chestnuts By the Fire (chestnut bites, raisins and hazelnuts) and the Flat Pack Brownie as mentioned above. I’m most excited by the Flat Pack Brownie (who doesn’t love Ombar or pecans?!!) and the Raspberry snack pod. I’m a big raspberry and coconut fan. I was also really impressed that there’s a tea included and from looking at the site, there’s also snackpods filled with chia pudding!

As a PT, would I be happy with my clients snacking with Earlybird? I try to encourage my clients to carry healthy snacks around with them but also appreciate it takes commitment to be prepared. I think these are great as a treat and certainly a lot healthier than picking up a chocolate bar! Because they’re rather tasty, I’d also have to make sure that they didn’t eat them all at once but nibbled on them through the week.

UPDATE: I had the Flat Pack Brownie and no, it doesn’t taste like brownie but I get why it’s called that – you kind of have to assemble the bits yourself into mouthfuls. Instead of doing this, I ate the pecans and dates first and saved the buttons for last.

I arrived home, from a weekend away, to a lovely surprise – an Earlybird snack box tailored just for me. (The box fits perfectly through the letterbox, so one doesn’t need to be at home to receive it.) My fridge was quite empty, as was my tummy, so this was perfect timing! The selection I received was; Flat Pack Brownie, Chestnuts By The Fire, Raspberry Coconut Jelly and Wheatgrass Is Always Greener. I’m a sucker for sweet treats, especially chocolate, so needless to say that the Flat Pack Brownie was my favourite, with the Chestnuts By The Fire a close runner-up. The mix of ingredients in each packet complemented each other and when assembled and eaten together, did resemble their given names.

The portion size is perfect, providing a fulfilling snack, without over indulging. Each snack is individually wrapped and sealed, making them easy to pop in your bag to take on-the-go. As a bonus, the packaging is recyclable and the expiry dates are long.

A handy pamphlet with the nutritional information is sent with each box, however, it fails to list the exact ingredients which would be useful to know, like what’s in the chestnut bites for example.

Overall Opinion: I would order again as these snacks are much healthier than grabbing a candy bar and are more interesting than biting into an apple. I especially loved the Mojitea Mockingbird tea that was included in the box. It was refreshing and benefits from aiding digestion.

I’m a hard one to please, I appreciate that and pre-packaged snacks have to be amazing to impress me. Whilst I like the idea, I’d rather zip to the supermarket and grab some edamame, nuts and raw chocolate and make my own energy boost as I felt the flavours could have been fresher.

More Information
Who are they for? Busy people who fear they’ll be tempted by chocolate and fast-food snacks and so want to know they’re prepared with something that’s a healthier version.
How much? £4.95 each but if a friend signs up using your unique code, they get their first box for half price and you get your next box half price too.
Where from? Buy online at www.earlybirdsnacks.com