Ok, let’s face it, smoothie bowls are just smoothies, but in a bowl. The advantage is that you can add delicious toppings to it and pretend it’s actually a meal, rather than a drink. We’ve made our Super Cacao Smoothie bowl nice and thick – in fact, you can almost pretend you’re having chocolate mousse for breakfast! But it’s healthy, so that’s ok. 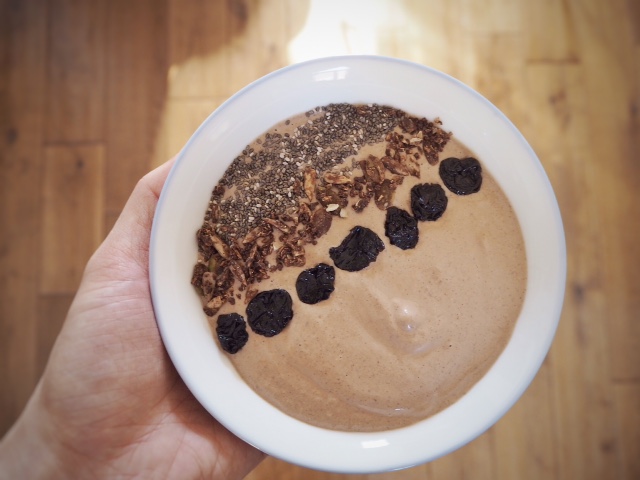 It’s called a Super Cacao Smoothie Bowl because we’ve especially chosen Aduna’s Super Cacao for this. It’s the only superfood in the UK to have its claim approved by the EFSA. Which is a pretty big thing, as the EFSA are a tough bunch to win over. Aduna claim that because they’ve chosen cacao beans which have 8 times the flavenol content of regular cacao powder, taking two teaspoons daily can help improve heart health. Flavenols are the heart’s best friend and can help maintain blood vessel elasticity and promote healthy blood circulation. And taking 2 teaspoons a day is easily do-able, especially if you’re a smoothie bowl fiend! You can also use the Super Cacao to make a delicious hot chocolate for days where you get rained on. Or don’t want to get out of bed.

We’ve also used Rude Health’s Ultimate Almond because as far as we know, it’s one of the few almond milks on the market with a decent percentage of almonds in, it’s not mixed with anything else and doesn’t contain any weird stabilisers or emulsifiers. This means that when you make things like a hot chocolate and heat it up, you don’t get that off-putting layer of oily water on the top. For the rest of the ingredients, we’ve used brands that we personally love but you can swap these out for ones you have in your cupboard. We must admit though, the Cherry Active cherries are a little bit special – as our recipe isn’t hugely sweet, those with a sweet tooth may love these on top as they’re tart and sweet at the same time. Cherry Active cherries are also good for lessening DOMs after a hard workout, as well as helping alleviate symptoms of gout and arthritis. There’s also studies that suggest they can help with jetlag and sleep too.

This makes one massive bowl or two smallish portions. I know what I’d rather go for…! 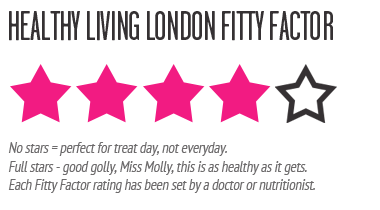