February is still quite a chilly time of the year and it’s when we want to comfort eat. Pancakes are awesome for this type of need but if you’re bored of the usual lemon and sugar, or banana and Nutella toppings, then we can assure you, these vegan cinnamon pancakes with spiced roast rhubarb are anything but boring. 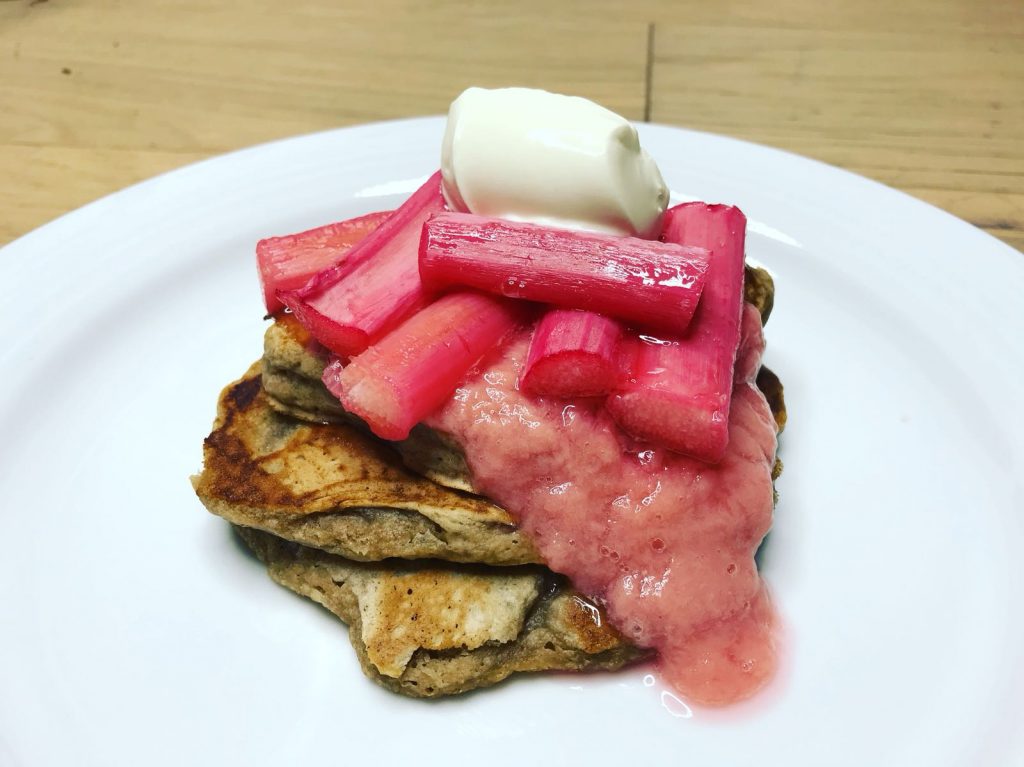 But first, I’ll let you into a secret. Susie Morrison, of Gourmet Glow, isn’t a fan of pancakes. She’s a fantastic chef who can make ANYTHING (see her Instagram @gourmetglow if you don’t believe me) but she’s much of a pancake lover. Or of dumplings. I KNOW. How can we still be friends with her? Thank goodness she’s a great chef, eh?! However, she is always up for a culinary challenge so when we asked her to come up with an awesome seasonal pancake recipe just for our readers, she went above and beyond.

Rhubarb is a fantastic ingredient too – sweet and sour, yet warming when spiced, it’s also a rich source of dietary fibre and polyphenolic flavonoids like beta-carotene, lutein, and zeaxanthin (carotenoids which are beneficial for eye health). Susie uses forced rhubarb , which is grown in the ‘rhubarb triangle’ in Yorkshire. This is a 9 square mile triangle between Wakefield, Morley and Rothwell. You learn something new every day, right? It’s cultivated entirely in the dark and picked by candlelight as light stops growth. All sounds rather crazy, doesn’t it? But the proof lies in the taste – these are paler, sweeter and more tender than summer rhubarb and it’s only grown in winter. Hurrah!

PS. Did you know rhubarb is native to Siberia?

Have a look at more of Susie’s recipes here. We particularly love her Shaved Fennel & Clementine Salad, as well as her crunchy granola.