You are here: Home / Archives for vegfestuk 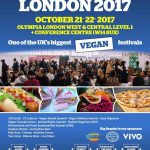 VegfestUK descended upon London Olympia last weekend, October 21st-22nd and attracted a record-breaking total of around 14,000 visitors. The event drew attention to a vastly growing vegan population and showcased the many benefits of being vegan. The many stalls and caterers showed-off their array of vegan products and vegan cuisine, as well as inspirational talks […]