I LOVE sweetcorn fritters. SO MUCH. Yet I’d never made them for myself and it was time that this changed. So I researched several recipes and spoke with a few chefs about how they made theirs. This is what worked best for me. 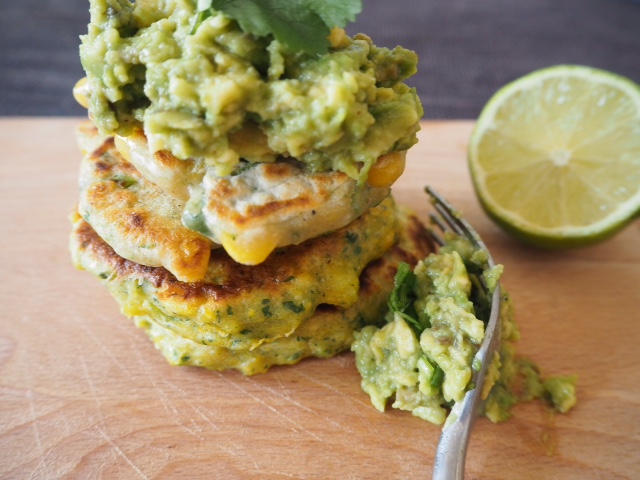 I’m a big fan of sneaking veg into whatever I make and courgette works so well with it. However, I’m sure you could also use spinach or grated carrot. I also use frozen sweetcorn as it’s quicker and easier, but I’m sure canned would be just tasty, as would fresh corn straight off the kernel.

My one gripe about sweetcorn fritters is that about 50% of the sweetcorn must just passes straight through the body(!), so I whizz the frozen corn in a food processor briefly before making it into a batter. Although whizz it too much and it can be too dense so make sure there’s a lot of corn kernels also in the mix.

I absolutely love these with a side of smashed avocado but a dollop of sour cream also goes well if you fancy some additional indulgence. And the crumbled feta within the fritter gives it extra taste and squishiness, although as the feta is quite salty, you may want to leave out the Himalayan sea salt.

As Rosie Flynn often comes over for brunch, I also put together a vegan sweetcorn fritter recipe.