With a few sprint triathlons under her belt, a #hellofitty editor and in-house triathlete, Emma, tells us the reasons we should do a triathlon as a varied way of keeping fit…

When I purchased my first real bike (a racer, not just one without training wheels), I had this idea I could become a triathlete. A few years and some marathons later (I needed to convince myself I could run first), I finally took part in my first triathlon. Now I’m not a professional triathlete, and I only do sprints –  the thought of spending longer than 750m in a deep, open water lake gives me the fear – but I’ve come top 15 in a few races. Despite the pre-race stress: wishing for a personal best, hoping I won’t panic in the water, praying my bike won’t puncture, once it’s all done there is no better feeling of accomplishment. 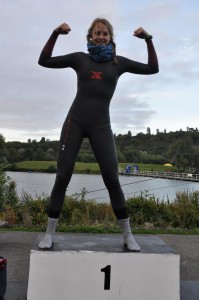 Here are 6 reasons you should consider doing a triathlon, be you a super-athlete or just wanting some motivation to stay healthy.

No race is more dedicated to giving your body an all round workout. The swimming works your shoulders, back, arms and torso, whilst the running and biking focuses more on your legs. No wobbly bits. Also, if there was a war in the whole of the western world and you had to traverse the earth to get to the other side, you’d be #winning, and you’d have no fear of open water, so the ocean wouldn’t be such a biggie.

My drive to do triathlons largely came from the idea I could actually be quite good at them, seeing as swimming is my best sport (it’s most triathletes’ weakest). Getting the technique right so you can efficiently cut through the water, expending minimal energy reserves, comes easier with years of practice. Then all you need to focus on is overcoming any fears of deep water (in my first triathlon I had a full-on panic attack at the 400m mark). Saying that, most triathletes I know are not natural-born swimmers, so don’t let it put you off!

Be this good or bad, lots of people are jumping on the triathlon bandwagon. I currently am doing races on my own, but many people join clubs, race with friends or compete with work colleagues. If you are less confident on your own, finding another friend to join and motivate you during the races and training can be the difference between the experience being fun or harrowing. (Let me know, a friend with a car could come in use).

4. Looking for a varied training schedule?

Unlike marathon training, you don’t constantly have to be out running. A week’s training can consist of many different disciplines – the three you have to do, plus any cross training that you think sounds fun. I found training for my marathon one of the most tedious things I have done (I’m not the biggest fan of running, especially for 3 hours straight), but caning it in a spinning class, a weight session with my personal trainer, doing an insanity workout, running a 10K race, and going for a 20 minute swim all contribute towards an effective triathlon training schedule. 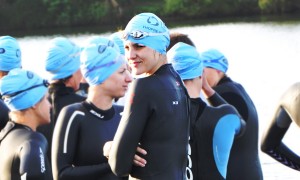 Amongst the pack of superheroes

Strength, speed and agility are key goals for me, and they give me confidence in all areas of my life. The discipline and variation in triathlon training gets you on the path to achieving world domination. But hey, if that’s not your goal, the training still gives you heaps more energy, and the endorphins make you happy.

I raced against my colleagues in the Blenheim triathlon last year. They were not just any colleagues, they were a pack of CEOs and other (male) senior management. Triathlons are very popular amongst the older, professionally successful folk, and thus they can be a way to either get in with an old boys management team, or just beat them all and have it on your cv.

Thinking of doing a triathlon? Check out http://www.britishtriathlon.org/

Here are some to consider in the London area: