Rosie, an old hat at obstacle course races, and Tom, a first-timer, recently completed the Windsor Spartan Race Sprint, a 5k race filled with over 20 obstacles ranging from walls to full on mud-swimming. Disaster almost struck with heavy traffic on the way and a pukey one-year old in the car, but, like with the race, they strove resolutely onwards and made it just in time to complete the course and hang the coveted medal from their necks. 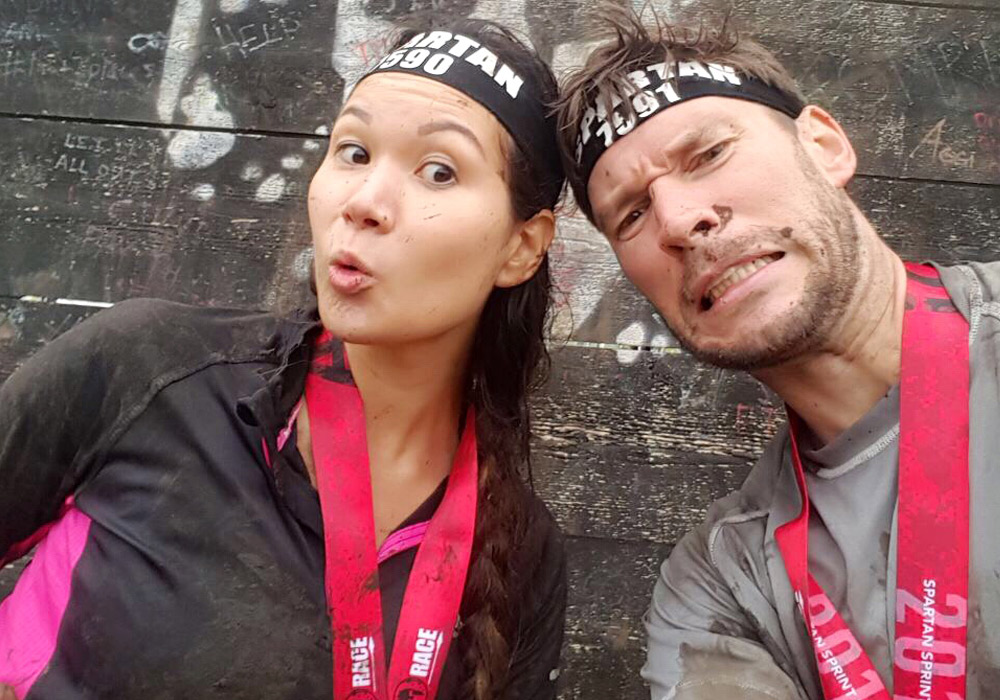 We’re lucky enough that they’ve kindly shared their experiences with us, their highs and their lows, in all their mud-spattered glory!

Rosie: This was my third Spartan Race, so I should be used to these things by now – the process of training, mentally preparing, wearing the right clothes, eating the best pre-race fuel, packing the right post-race survival kit… But each time feels like the first and I quickly remember that it’s because the trauma of the previous times have been pushed to the back of my mind, (along with school and driving tests).

One thing I did remember from the first time (funnily enough) was the abundance of Adonis-esque men strutting around and this year was no exception. In fact, as I awkwardly hitched myself over a wall and into the pen where the start line was, I noticed that there were also some very chiselled looking ladies with lats to die for.

As my confidence shrunk and my nerves grew, I reluctantly joined the group warm up and of course I was tired before the countdown to start had even begun…

As I mentioned before, my memory of these events seem to abandon me once I cross the finish line and head for the burger van and I swear this year there was:

I was SO proud of myself for getting over one of the tall walls (well, taller than me) on my own. I got shown a technique by one of the volunteers (who were all very helpful) and couldn’t believe it worked. I wanted more of those walls, but instead got more mud and the walls at the end were double my height. (Once you get used to being able to do things without help, it gets a bit frustrating when you need to rely on a leg up!) There were so many walls that now when I walk around I look at walls and size them up and mentally attempt to climb over them.

The wading through the mud really bugged me. It was such a slow process, but I was so thankful for my shoes being too small (after shrinking from being washed so many times), I was one of the few people who didn’t have to deal with losing a shoe, (though I did nearly lose a leg trying to climb out of a swamp).

The trickiest obstacles for me (and most people) were the walls which you had to get across with only the tiniest platforms and grips to hand. They were put there just to annoy people. (Probably).

There was a good mix of teams and competitive individuals running in our wave, which meant there was a balance of encouragement and focus. I was somewhere in-between as I started off as part of a two-person team for the first minute and a half and then found myself running as a nonchalant individual. (Thanks Tom.)

Tom: ‘Spartan Race’: words I have always vaguely feared after hearing my wife’s horrific accounts of similar macho obstacle course ordeals. She comes back from these things so exhausted she can barely talk and clogs our washing machine with mud-filled clothes. Truthfully, I could never really see the appeal. But then she told me that it was because I wouldn’t be able to get around… so I went. Even better, I cheated. I went to a ‘Spartan Sprint’ (5 km) rather than a ‘Beast’ Spartan (20 odd km), which meant it was manageable even for a moderately fit, not-organised-enough to do training nearly-middle-aged man like me. Middle age starts at 50, no?

The race was a brilliant adventure from start to finish. There is an orchestrated warm up by a half-naked man involving burpees and roaring. Then, the course starts with running through mud which is clever because you immediately become immunised against dirt – you’re already filthy so why worry? Then it’s running over moderately rough ground, though the paths are well marked, and taking on obstacles at nicely spaced intervals. The obstacles vary from ones everyone can do to ones virtually nobody can and I loved them all, having always been someone who has the strange instinct to jump over, onto and into things and loved climbing trees. My favourites were traversing the rings – surprisingly easy if you don’t rush and have a decent rhythm – and all the fences. But I got stumped on this weird one at the end which involved traversing a wall. Every obstacle you fail requires a 30 burpee penalty but – don’t tell anyone – if you are in the later waves of runners (when the competitive folk have already finished) then you can usually get away with missing a few!

The whole vibe for the later racers (we left at 12.45pm) was friendly, and I chatted to lots of people on the way round. There’s a real sense of supportive camaraderie, though the whole thing is timed so I did occasionally try to push it a bit.

The only snag for my race were that there were queues at a few obstacles – a welcome breather for those like me happy to chat but I’d recommend earlier races (where queues haven’t built up with racers from multiple rounds) for the truly competitive.  I would definitely do it again, maybe with some training. In fact, I’d do it again just for the fun of jumping over the finally half-obstacle: constantly burning logs. I am Spartacus! (*wife frowns*) 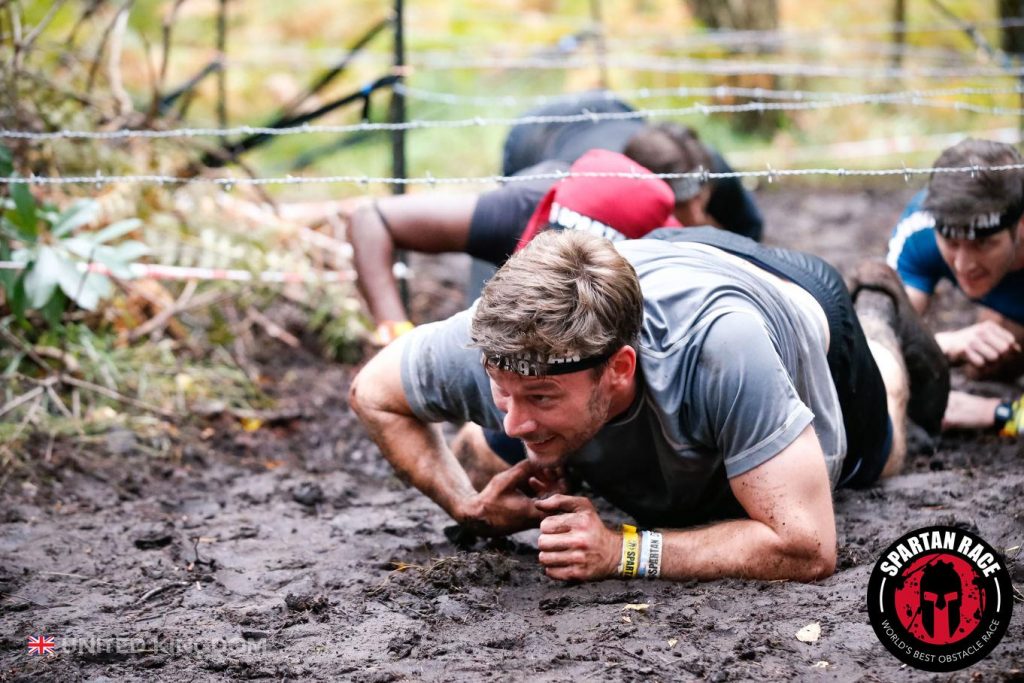 Someone’s having too much fun… 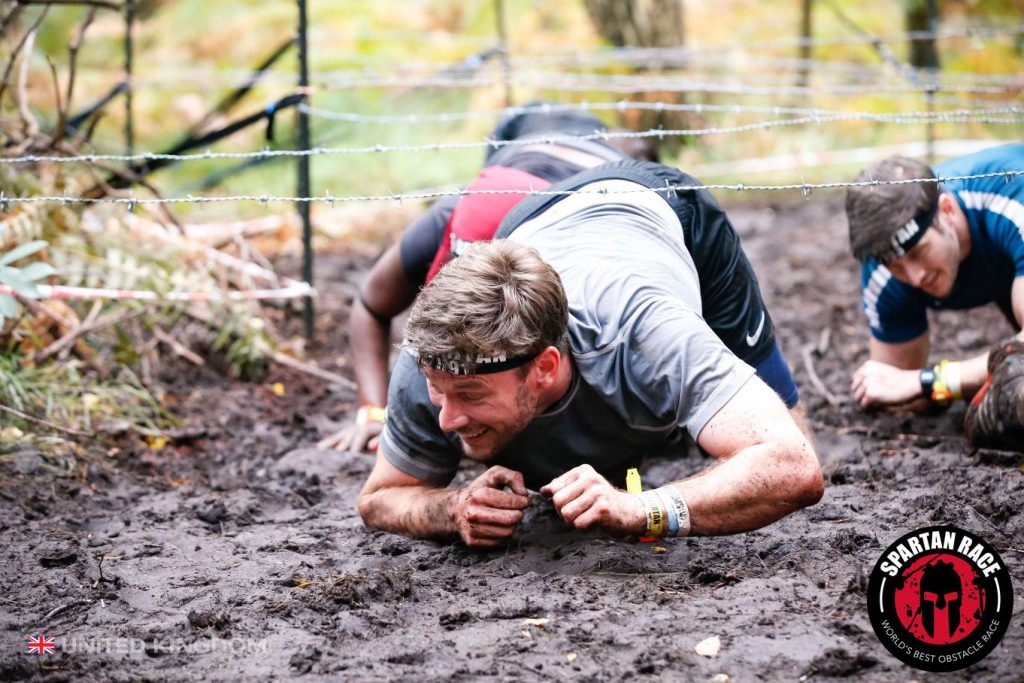 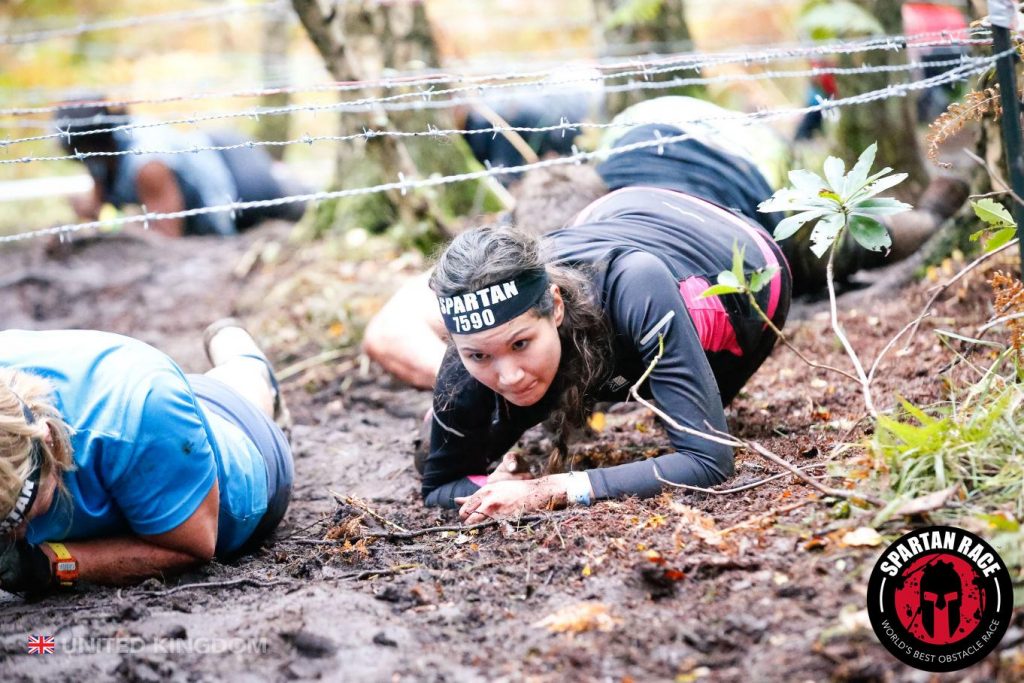 The serious face of an army crawl. 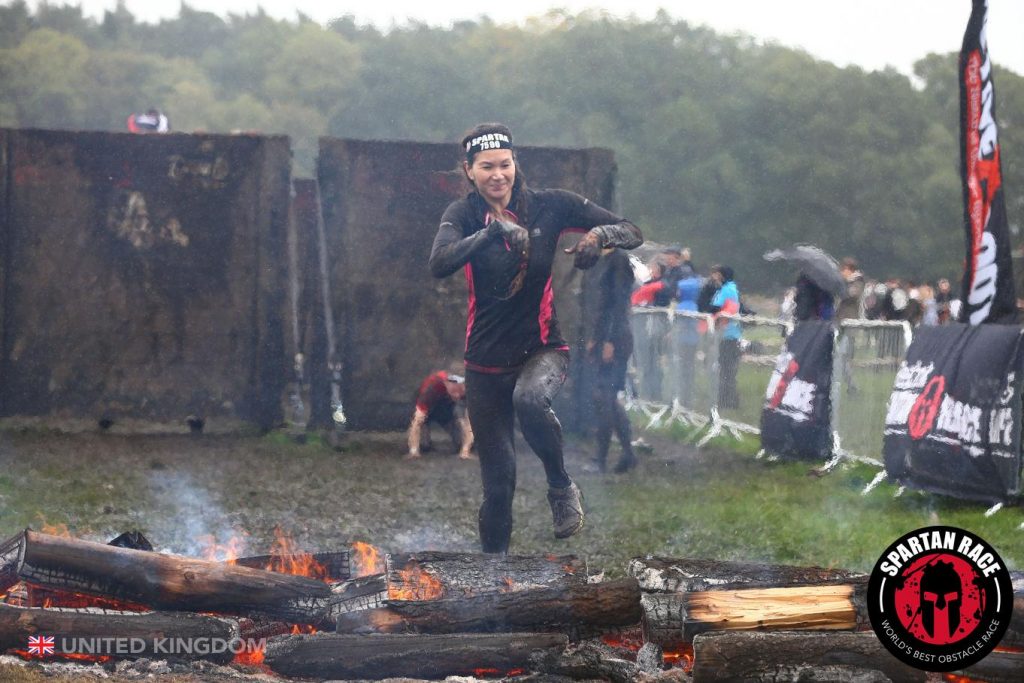 The face of enjoyment. 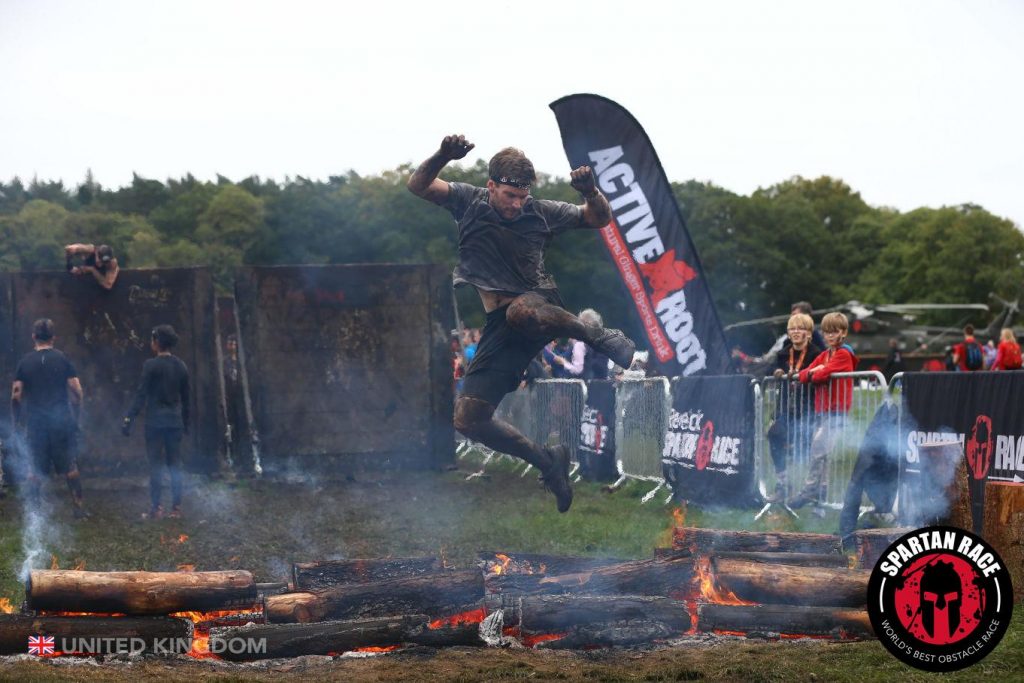 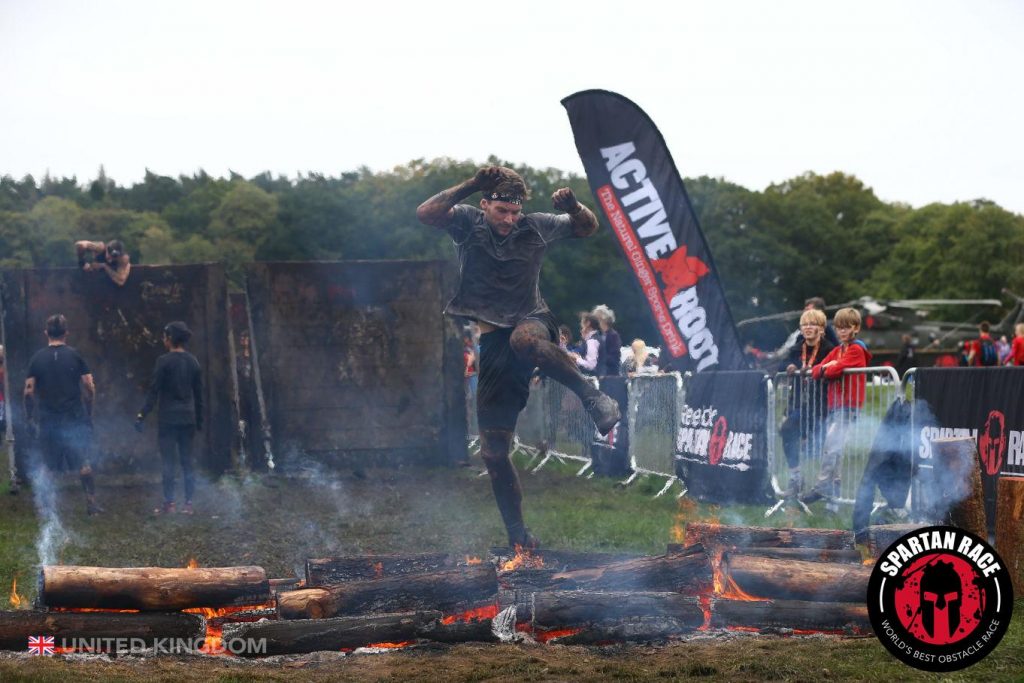 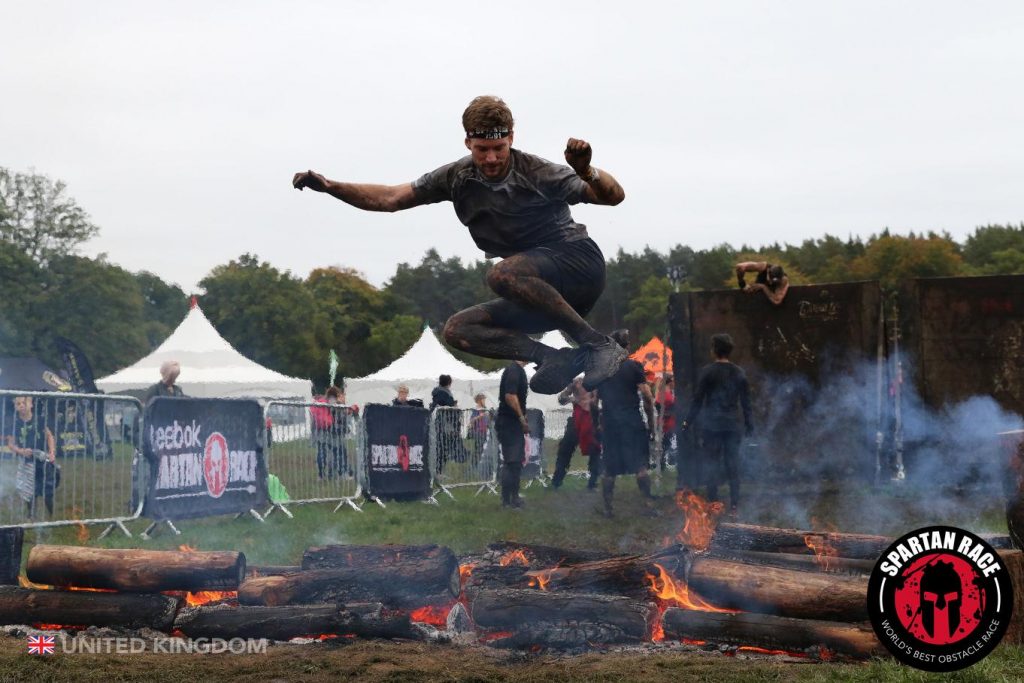 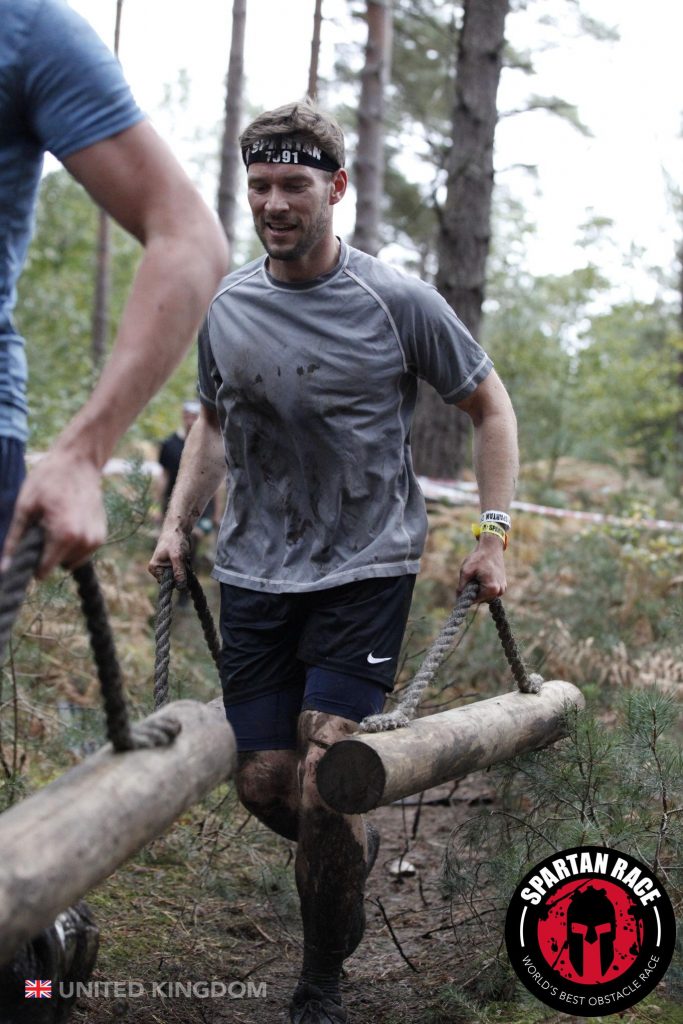 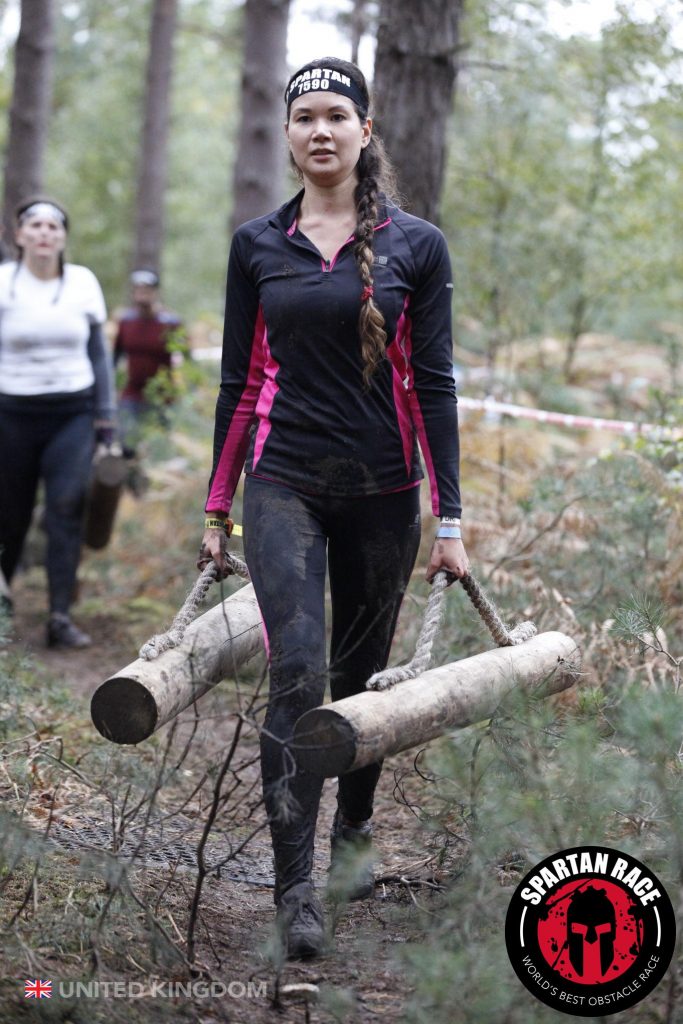 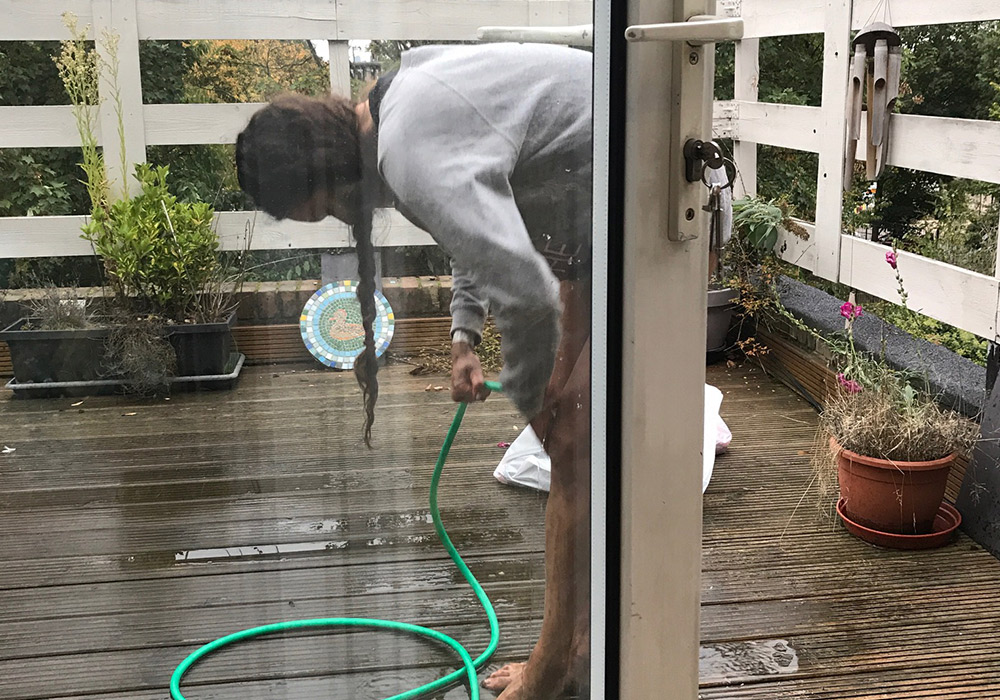 Still finding mud in every orifice, even after a good hose-down….

If you want to test your strength, stamina and speed, then this is a great opportunity to do so. It’s fun, but as you get a chip, you can find out your time and position in your wave at the end of the race. If you want to run for fun, I’d suggest to go with a team of like-minded people who can help you over obstacles and you can finish through the flames together.

As one of the longest-running obstacle course races in the UK, the Spartan Race has seen tens of thousands of Spartans clamber over walls, carry ‘pancakes’, army crawl and get coated in mud. It’s also one of our favourites, testing full-body fitness in a fun and unique way. When do we ever get to clamber and climb in our ordinary day to day lives?