GynaeCheck is a revolutionary home-kit screening test for the Human Papilloma Virus (HPV) which is the cause of 99.7% go cervical cancers. If your blood runs cold the moment you open that doctor’s letter and see the words ‘cervical screening’ then GynaeCheck may be the solution for you. There’s no speculums, no probing fingers (aside from your own) and no taking time out of work. 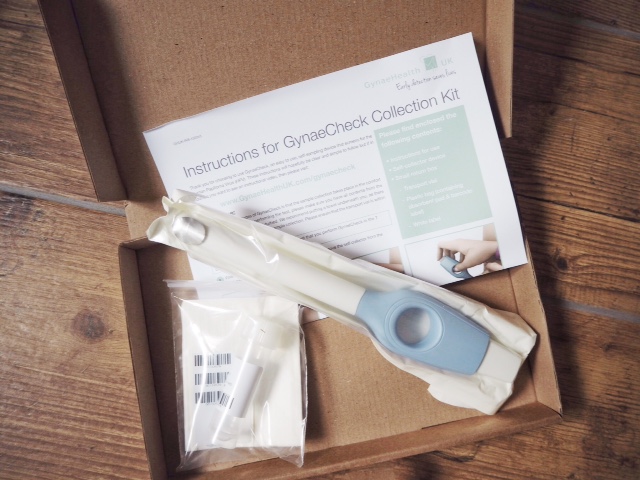 Every 3 years from the age of 25 to 49 (it then moves to every 5 years from ages 50 to 64), women are invited by their GP to attend cervical screening. This is a painless procedure that involves going to the practice you’re registered with and having cervical cells collected. This takes around 5 minutes. First, a lubricated speculum is inserted into the vagina and a soft ‘brush’ is used to gather the cells. Can you feel it? Not really – some people say it’s uncomfortable, some people report that they can’t feel a thing. Sometimes there’s bleeding but not much. The cells are sent to be analysed and results are posted to you within two weeks.

For some people, taking time out of work is impossible. For others, they dread being examined ‘down there’. Whatever the reason, according to GynaeHealth UK, there are 5 million women in the UK who are overdue their smear test. Each year, 3,100 UK women are diagnosed with cervical cancer. The good news is that it’s treatable if caught early.

The GynaeHealth UK team invited me to try out their home smear test. It tests for the HPV virus as nearly all cervical cancers are caused by this. As someone who was diagnosed with cervical cancer in 2013 and had several operations to rid my body of it, I now undergo two smear tests a year (it used to be every 3 months). So I don’t have a problem with smear tests. But I do know many friends who hate them and who bury their cervical screening letter at the bottom of their to-do list. And it often stays there. So it’s for my friends and anyone else who hates having a smear test done that I tried this out.

GynaeHealth claim that their smear test takes 3 seconds. That’s less time than it takes to sneeze. I couldn’t quite believe it but I was willing to give it a go. I can tell you now, it took about 5 minutes from start to finish; that’s from setting up the bathroom to opening to box, to taking the test, to getting it ready to be sent off. Compared with the 2 hours it currently takes me when I get smears done, including travel time and waiting, it’s pretty good.

The GynaeCheck comes in an A4-sized brown box. Inside, there’s instructions, the ‘device’ and a small brown box, along with the collection tube, plastic bag and sticky tape. Before the screening kit is sent out, there’s an online questionnaire to fill in that assess your risk.

Let’s start with the device. It’s a bit alarming to start with, mainly because it’s bigger than I thought it would be. It consists of a white tube with a blue segment that operates a little button. It looks a little like an elongated tampon. At the end furthest from the blue segment is a foil tip. The idea is to position yourself comfortably (they advise lying down with a towel beneath you), before taking off the foil tip and inserting that end as far as it’ll go into your vagina. Then, you press the blue button which releases water. Count to 3 and then release, before pulling the oversized ‘tampon’ out. Once out, press the white button on the end to release the liquid into the collection tube. Simple! Or was it?

My bathroom isn’t big enough to lie down so I improvised and sat on the toilet instead. Anyone who does this for themselves, get prepared before you get comfy. For me, this meant opening the collection tube and leaving it within easy reach and placing a towel underneath me. Just in case things got messy. All in all, it’s pretty easy. There’s a slight weird feeling as you release the blue button and remove the device – it sucks up all the liquid it released. After that, the rest is easy and within the hour, the sample had been deposited in the postbox using the pre-paid box.

Results are sent within 10 days.

I can’t stress enough that everyone who’s over the age of 25 should get regular cervical screenings. For whatever reason, if you don’t or won’t go to visit your doctor then I am wholeheartedly behind this product. It tests for the high-risk strains of HPV (there are several versions of HPV) so anyone who is at increased risk of developing cervical cancer have early warning. And early warning is what saves lives.

Who is it for? Women between 25 – 65 years who would rather do a home cervical screening rather than go to their doctors.
How Much? £129 to test for HPV, £149 to test for chlamydia and HPV
Where to buy: www.gynaehealthuk.com