Making raw food taste good is considered an art, after all being unable to heat food immediately means that chefs have to be creative with how they put dishes together. However, Nama has made a name for itself with its range of nutritious drinks, snacks and generous but beautiful plates of raw food. We visited for lunch to see what all the fuss was about. 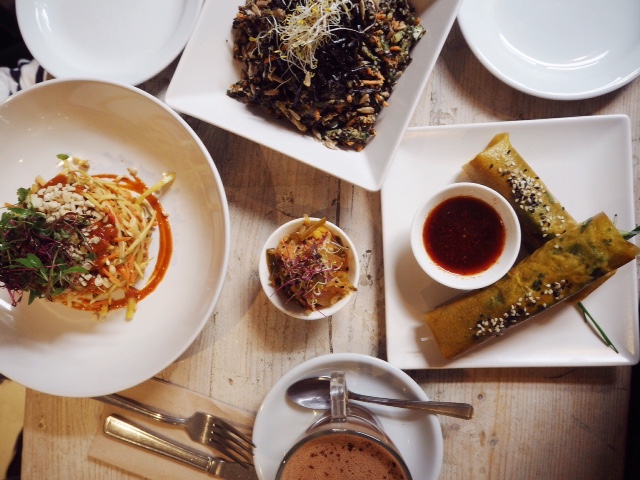 From left to right: Pad Thai, Mayan Cacao, Summer Rolls, Seaweed Salad. A side of kimchi is in the middle.

“So what did you think of the food?” I asked my friend.

“It was great,” she replied, “although I would have thought the Pad Thai would be hot…”

Nama is a raw food restaurant based a short walk from Notting Hill Gate or Westbourne Park. It is simply decorated inside and out with white walls and clean lines, so not as to steal the limelight from the main attraction, the food. Nama is a bit like a tardis – it’s small but roomier than you think, with a downstairs dining area right next to an open kitchen. There, you can spot a colourful array of diced, sliced and spiralised vegetables, some recognisable and some not. Look closer and you’ll also discover other elements which make up the dishes – we couldn’t fathom what the golden yellow ‘sheets’ were until our summer rolls arrived.

The definition of raw food is food which hasn’t been heated above 42’C, or 115’F. It is thought that heating food above this point denatures enzymes and destroys vitamins and minerals. Nama’s concept is to provide food as nature intended, altering it as little as possible. Instead of heating the food using methods such as boiling, frying and grilling, their chefs preserve, ferment, dehydrate and marinate to coax out the flavours.

I visited Nama with ‘HB’ my 3 month old and Alice, a new mum with a 7 week old. Upon arrival, staff were extremely helpful and accommodating and helped Alice carry her buggy down the stairs to the restaurant area. Bonus points already. At 1.30pm, the restaurant area was filled with a lively mix of a family, work mates, friends and what looked like a casual business meeting.

A word of advice: Don’t go to Nama expecting a ‘quick’ lunch – the menu, whilst not one of the most extensive I’ve ever seen, has too much good looking stuff on it (including the drinks) so if you’re bad at decision-making, this is going to be tough. Alice and I decided to share several dishes. This isn’t something I’d usually do (think Joey from Friends) but now that we’ve got babies and are all grown up, I figured we could handle this. We ordered the Summer Rolls (mango, coriander and coconut meat wraps), the Seaweed salad (my new favourite thing) and the Pad Thai. To drink, Alice chose the Living Green juice and I had the Holy Mayan Cacao which is like a hot chocolate with a kick. I’ve had a few seaweed salads in my time but this tasted totally different. And in a good way. The Pad Thai was creamy and zingy (get rid of any expectation of it tasting like your average Thai Restaurant dish and just go with it, trust me) and the summer rolls were fresh. The dipping sauce made it. In fact, both of us agreed that the summer rolls were our favourite. I almost forgot, we also ordered a side of kimchi (which I had my doubts about as kimchi has a definite fishy taste but it was delicious) as Alice had read that fermented foods were good for you. As if we could get any healthier with our meal! 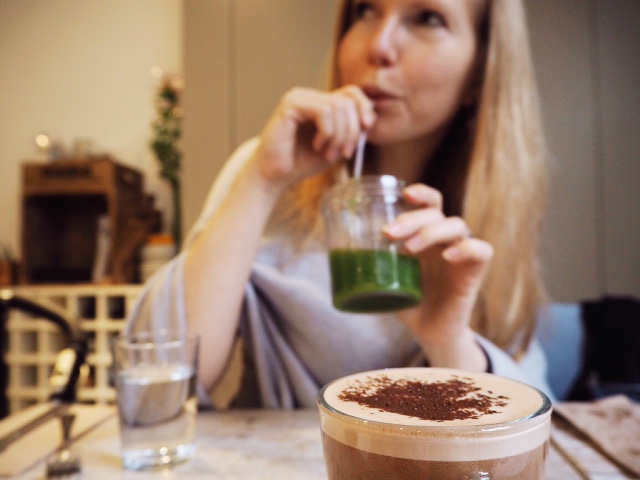 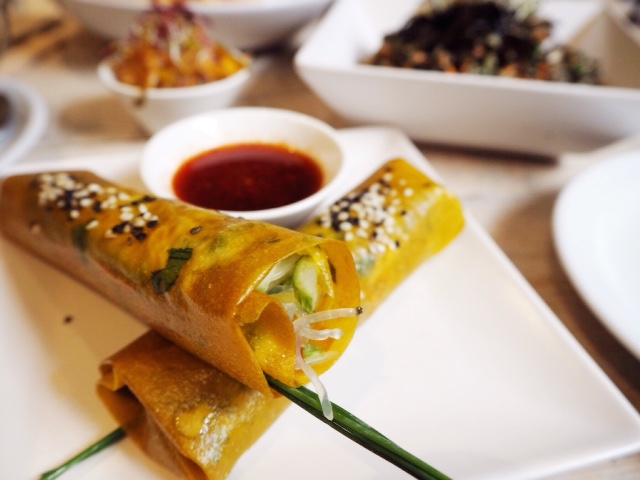 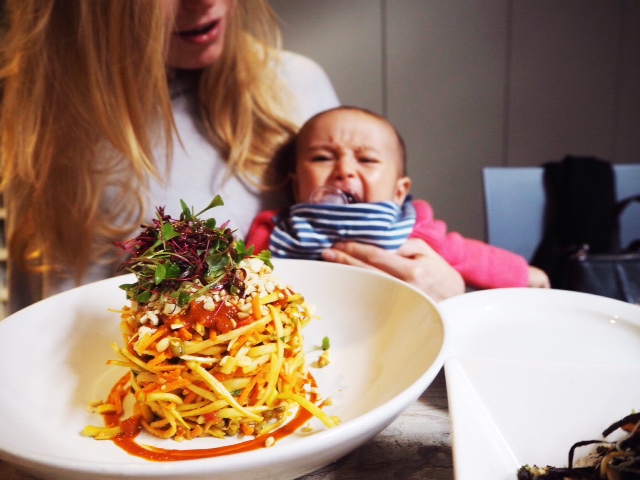 HB is sad because we didn’t let him try the Pad Thai. 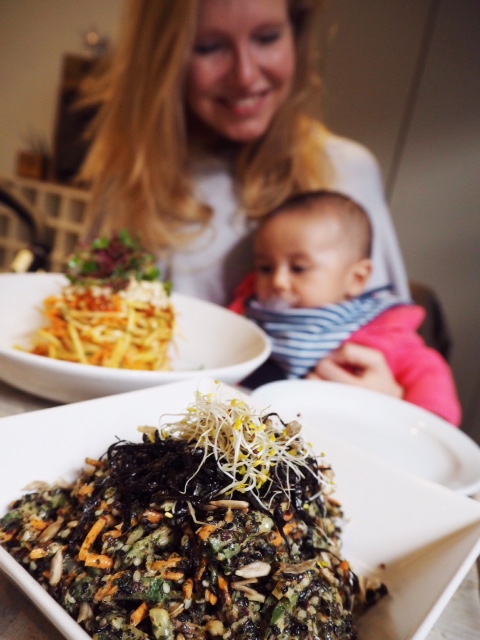 A close-up of the delicious seaweed salad 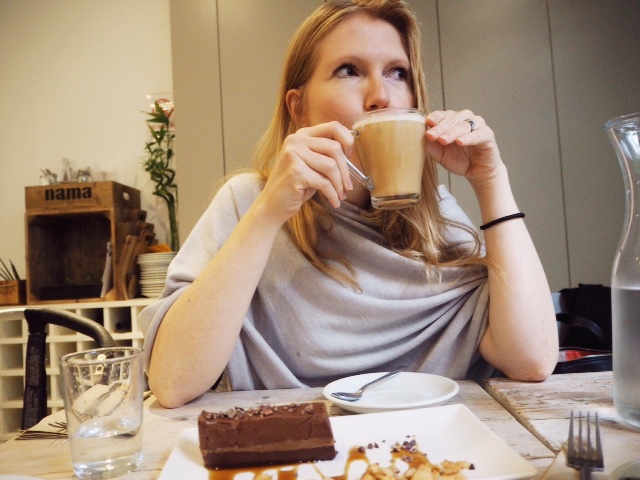 We left room for dessert, choosing the chocolate caramel cake which was perhaps too rich for us in contrast with what we’d had for our mains and finished with a Superfood Latte each, containing a potion of medicinal mushrooms, lucuma and other exciting ingredients. The latte part was perhaps a little misleading as it didn’t contain any coffee, but not being a coffee fan, that was one of the things I liked about it. We had a choice of plant milks with our lattes and Alice chose rice milk and I went for cashew which affected the overall taste of the drink. Alice’s was a lot sweeter whereas mine was creamier.

Whilst I’m an advocate of raw food for its health benefits, I think taste-wise, it can be hit or miss, yet Nama gets it spot on with every dish. It feels like the food is carefully crafted and each ingredient handpicked for its qualities, whether that’s scent, texture or taste. Nama has a lot more going for it than being shoehorned into the ‘vegan’ and ‘healthy’ category, and indeed, its wide variety of customers are testament to its tastiness. Between us, we shared a starter, salad, main and pudding and had we not had the drinks, we would have still been left feeling peckish. I think if we had included another starter (we definitely could have had a plate of summer rolls each) it would have been just right.

From December, Nama will be releasing a special Christmas menu.
For reservations and to see the menu, take a look here >

More Information
Who should go: Anyone who enjoys fresh and tasty fine-dining-esque food.
How much: A starter, main and salad, with pudding and 4 drinks in total cost us £50 all together
Where is it: 110 Talbot Road, W11 1JR
Website: www.namafoods.com