Spoon cereals. I fell in love with this new kid on the breakfast scene purely for the name alone. Who doesn’t love a good spoon? Of cereal, of course! 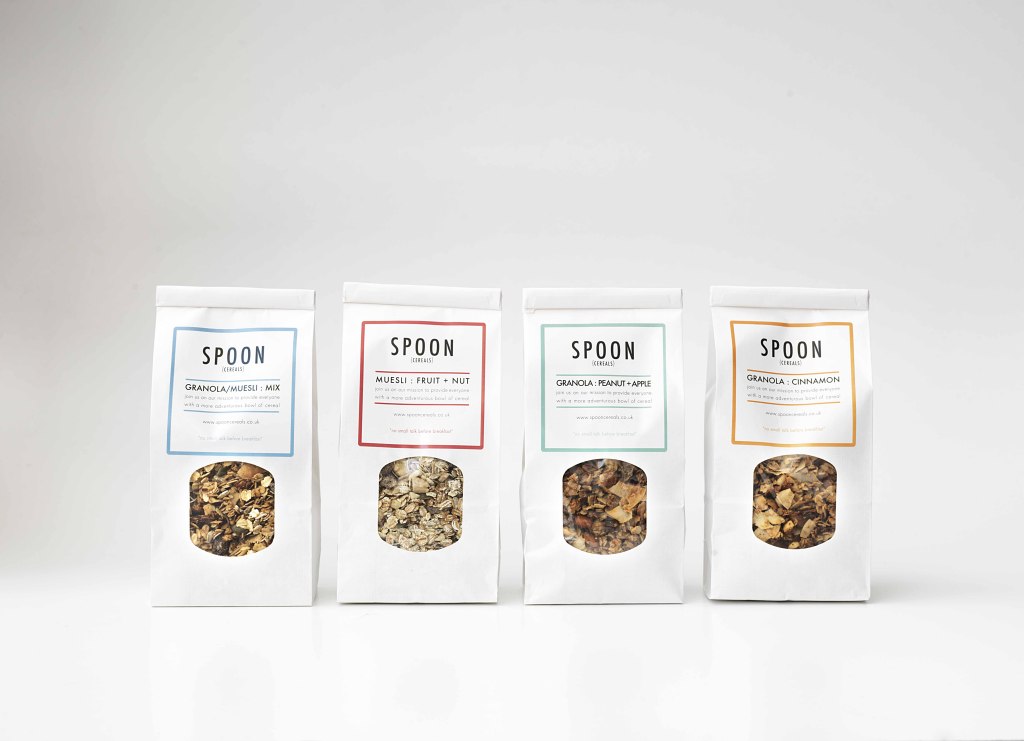 Ok so here’s where I admit I’m not that much of a breakfast fan. Being lactose intolerant (unconfirmed until a recent DNA test proved my worst fears) I shied away from any breakfast that involved milk. And to be quite frank, dry Wheatabix is pretty crap. As for toast, nah, that never really floated my boat either. The good news is that a) I’m surrounded by cereal lovers and b) I’ve started really getting into granola and even made my own the other day.

Spoon Cereals, backed by Deborah Meaden, is the delicious baby of Annie Morris and Jonny Shimmin, who came up with idea at a family BBQ in 2013 after lamenting the lack of adventurous or tasty breakfast options for the busy commuter. With Annie, a cereal lover at its helm, and using their first customers’ feedback, their breakfast offerings were finely tuned to come up with the perfect mix of taste and nutrition.

With four different types of cereals to try, it was hard to decide what to ‘spoon’ first. In the end, following the strict rule that I follow on the dinner plate – leave the favourite bits until the end – I cracked open the Fruit & Nut Muesli. Here goes, in order of consumption:

Generous portions of seeds and fruit with moderate sweetness so if you’ve got a sweet tooth the brown rice milk is a good option. This was way better than most of your standard fruit and nut mueslis that I’ve tried before. And judging by my other half’s disgusting mouth-half-full noises of approval it was so good he couldn’t even wait to finish his mouthful. Thanks darling. Not what I wanted to see first thing in the morning.
What’s in it? Jumbo oats, rye flakes, spelt flakes, dates, apricots, sultanas, toasted brazil nuts, toasted hazelnuts, toasted almonds, pumpkin seeds.
Served with: Rude Health Brown Rice Milk
Verdict: Ever so chewy but very filling. One bowl of this would definitely see you through until lunchtime. 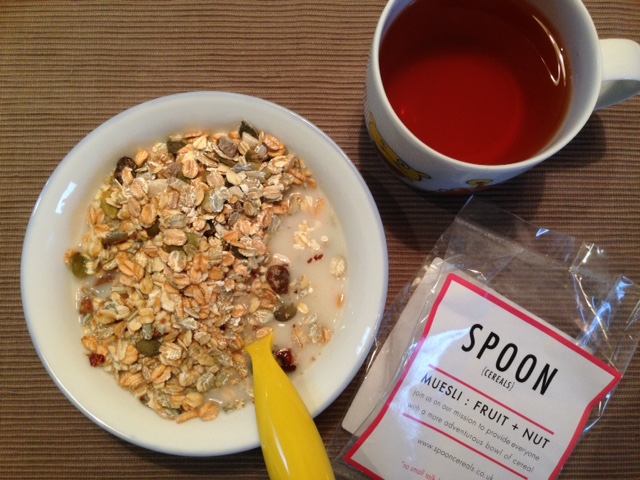 Peanut and apple was a combination I was slightly wary of. After all, it had slight allusions to peanut butter and jelly, a partnership that I wholly disapprove of. I tried this when I had partial HANGER, so literally came home and ate it straight out the pack. The social media part of me did show an element of self-restraint however, and I managed to get a quick photo before too much was gone. I love that the peanuts still have their skin on – there’s something unacceptable about naked peanuts. And it’s a nice combination with the nuttiness and sweetness of the apple. 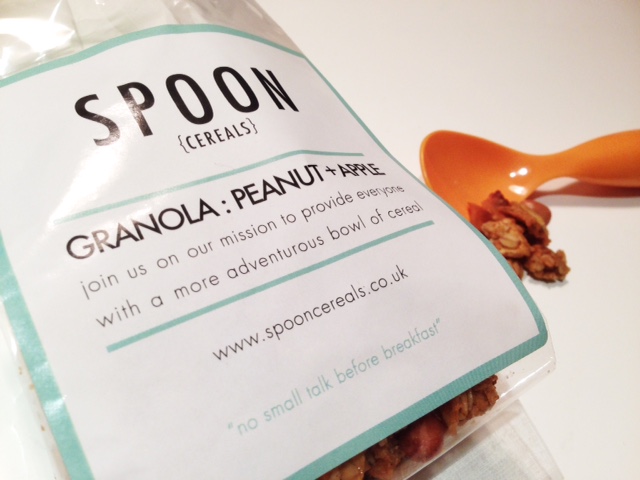 Ok so I admit it here and now, I was a total selfish biatch and saved this one for myself. I even hid it at the back of the cupboard just in case. I do like granola and I do like cinnamon. Seriously, I try and shove it on most things, even when it’s totally inappropriate. Cinnamon in your lemon and ginger tea, anyone? It was also a bit chilly when I woke up and decided today was the day to have a bowl of Spoon’s Cinnamon Granola. So I put it in a bowl, complete with milk and served it up when it just started bubbling around the edges. And oh wow, it’s good! It still retained its crunch but all the flavours had turned the milk cinnamony too. I do think it was a bit of a mistake serving it with brown rice milk though as that was two already sweet items combined.
What’s in it? Jumbo oats, coconut flakes, hazelnuts, maple syrup, rapeseed, oil, vanilla extract, cinnamon, salt.
Served with: Rude Health Brown Rice Milk
Verdict: Delicious served hot but steer clear of combining it with brown rice milk – it turns into sugar overload. 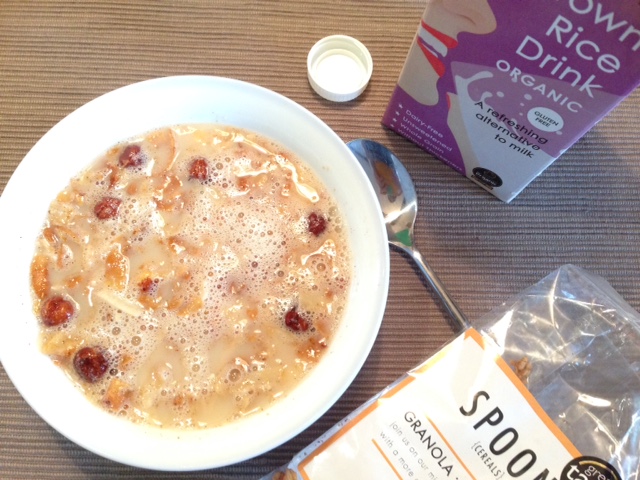 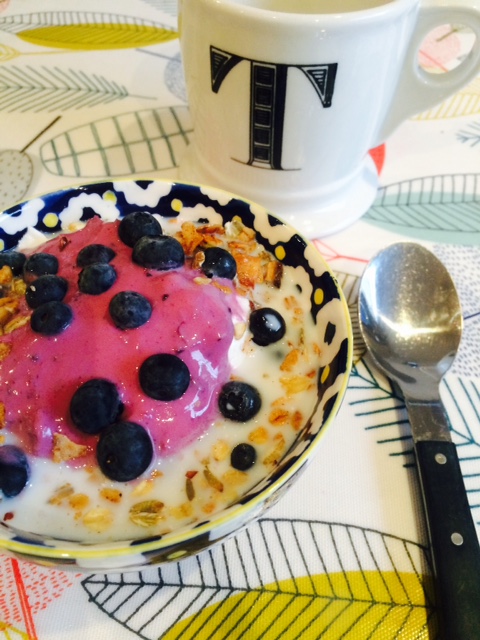 I saw that Alexia from swimwear brand, Bikini Fling, had commented on a previous Instagram post about how much she wanted to try Spoon Cereals so with a well-times visit I left her with a packet. This is what she had to say…
“The first thing I said when I put this in my mouth is was an explosive ‘oh my god that is really good’. The perfect cinnamon punch, the perfect texture of softness & crunch, each mouthful a variety show: one minute a beautiful sweet almond, the next generous flakes of coconut, then just this lovely medley mix of all the flakes (oat, rye, spelt). Oh! Just got a chunky brazil nut. I can honestly say this is the best granola I have ever had the pleasure of starting my day with!”
What’s in it? Jumbo oats, rye flakes, spelt flakes, maple syrup, rapeseed oil, coconut flakes, toasted hazelnuts, toasted almonds, toasted brazil nuts, dates, sultanas, apricots, pumpkin seeds, vanilla extract, cinnamon, salt.
Served with: Semi-skimmed milk, a bit of plain Greek yoghurt, topped with M&S blackcurrant yoghurt and a smattering of blueberries.
Verdict: I think it’s fair to say Spoon have succeeded in their mission to make breakfast more adventurous. Sounds like Alexia had a whale of a time!

Where to buy: Shop online at www.spooncereals.co.uk or take a look at their stockists page.
How much: From £5 for a 450g pack
Who’s it for? Those who have a sweet tooth and enjoy a more exciting breakfast without having to put the effort in.