Eliza Flynn recently appeared on the 15th February Sportuccino episode, hosted by Richard Parr to talk about Healthy Living London’s #eatsweatbreathe ethos, her thoughts on where to find the best vegan food in London and more (it included some rather terrible and impromptu singing… to be specific, Disney). Watch the full interview here. 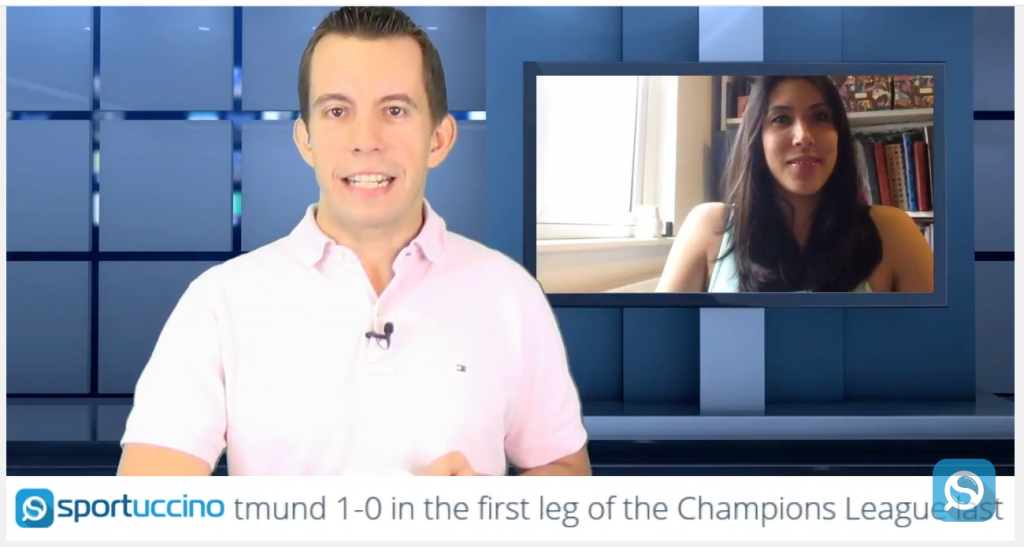 My mornings are so different to what they used to be 6 months ago. Before, I would wake at 7am, enjoy a breakfast smoothie, meditate, check over emails briefly and shower. By 7.45am, I’d be ready to start my day. Sometimes I’d even do a little workout. Now, I wake at 7am, pick up the baby from his room, head to the kitchen to feed him, balance feeding the cat and carrying a baby, pick up my phone to check emails only to have it dribbled on, try and sneak into the shower before the little one realises I’m not within the requisite 2 metres and pick up whatever’s lying around as breakfast. Sometimes this is a banana, sometimes it’s last night’s meal. On bad days, it’s nothing. By the time I’m ready to my start my day, it’s several hours later. So when Richard told me we’d jump on a soundcheck and quality call at 7.30am and be on air by 8am, I was interested to see how this would turn out.

Thankfully, I was able to rope in my husband to keep the little one amused but as is always the case when you have a baby, things take a lot longer than you expect. So apologies to everyone who watched the video for my bleary-eyed, bed-headed appearance. Massive apologies too for the terrible singing. That’s what babies do to you – ruin your brain and make you do weird things!

I’m very grateful to Richard for giving me the opportunity to speak more about the #eatsweatbreathe ethos as it’s something which is very important to me. I know from first-hand experience that you can have one or even two elements of that triangle sorted but without all three, it’s impossible to build up a balanced healthy lifestyle. Just like a tripod, you’ll be wonky. A lot of people find the ‘breathe’ elements hard to integrate into their lives. For those people (and I’m one of them), I’ve found gentle yoga such as hatha, meditation (I love the vedic style which uses a mantra), taking a course which requires my full attention (I did a lost wax jewellery course which was brilliant) or even colouring-in (I didn’t think much of it until I tried it) really helpful.

Anyway, watch the interview and I hope you find it useful. A list of the places I mention are underneath in the notes section.

Sportuccino is hosted by Richard Parr, a sports broadcaster, commentator, reporter, editor, writer and producer who has previously worked for channels including Eurosport, Sky Sports and Al Jazeera English. It’s an online channel which discusses sports, health, fitness, nutrition and travel. You can find them live every weekday at 8am GMT (3am ET, 12am PT and 4pm HKT). Find out more at Sportuccino You can also watch it live on Facebook! Check out the links below:

Book I’m reading at the moment: itunes/Sportuccino – A fantastic read by Michael Gregor, made famous with his Daily Dozen checklist, a list of the foods to eat everyday to keep your body in good health.

Favourite vegan eats in London: Nama in Notting Hill which specialises in raw food and What the Pitta based in the Pump in Shoreditch. Most Indians do tasty vegan food too and you can often get delicious vegan Thai too.

#eatsweatbreathe hoodies: These come in 2 colours and are available here We’re also going to be releasing a new range of active wear so make sure you’re signed up to the mailing list to find out about these first.