We went to a 75 minute charity flow class with Marc Laws II, Starseeds and Another Space. Proceeds went to LSX –  London Sustainability Exchange – a charity that aims to improve the city’s carbon footprint and change people’s lives for the better. 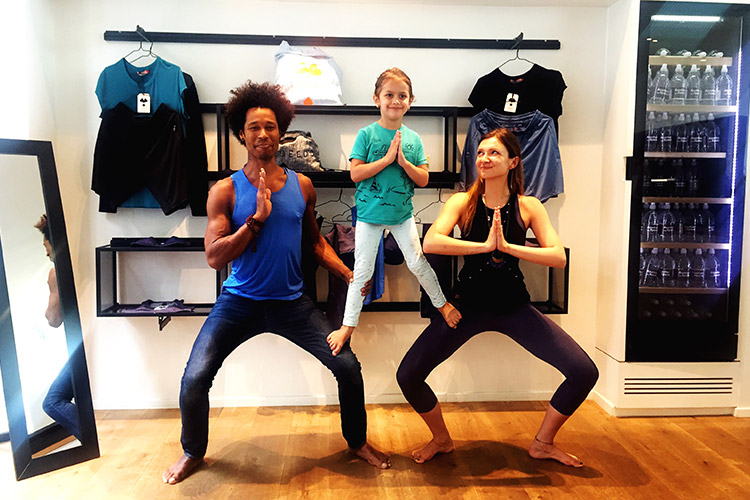 “I grew up in Eastern Europe in a Communist country in the 80’s. As a young girl I had a dream to become a fashion designer. This went beyond a dream as I ended up working for Elle Magazine and Alexander McQueen. But I soon realised that there was something very wrong with the fashion industry…” – Natalia Zawada, founder of Starseeds.

Did you know that the fashion industry is the second most pollutive industry behind oil? That in some factories the average age of death for a worker is 18? Natalia Zawada from Poland lived her dream as a designer in the elite fashion world but could not turn a blind eye to the devastating effects it has on the environment, our health and the impenitent disregard of human ethics, (or lack of.)

The Starseeds founder wants people to be conscious of what they’re putting on their bodies and in the fitness world, what we wear has a big impact on how we perform.

After frowning involuntary, I thought about this immense statement for a moment.. The yoga industry is growing yearly, (over $27 billion is spent on yoga products in the US, annually) it’s one of the most popular scenes in the fitness world and it doesn’t look likely to die down anytime soon (it’s the only activity experiencing steady growth).. From meditation and mindfulness, to plant-based diets, yoga is influencing us to do a lot more than just stretch and pose. Using yoga to draw awareness to sustainable sportswear is a perceptible path and with people being more conscious of health and environment issues, it’s a good time to spread the word. 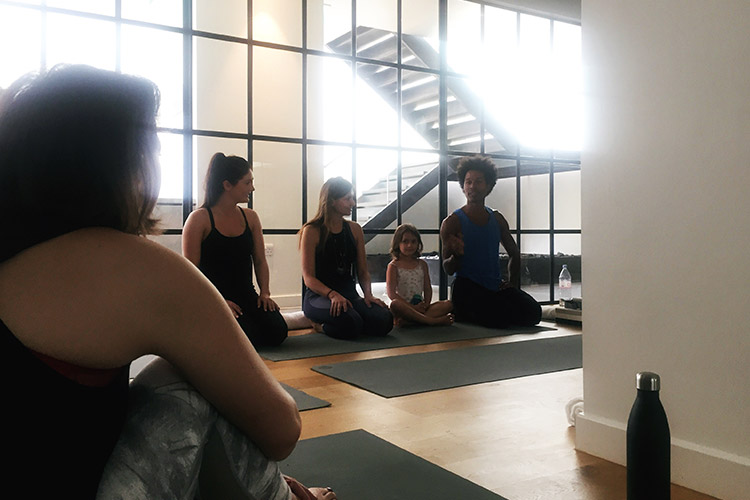 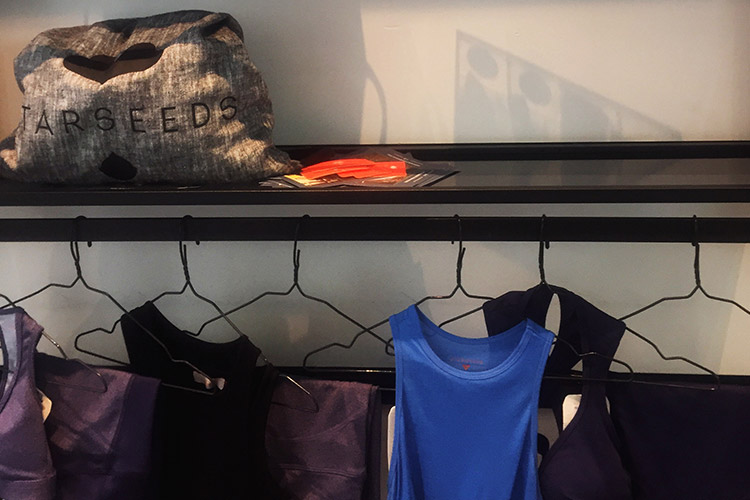 A selection of the Starseeds range 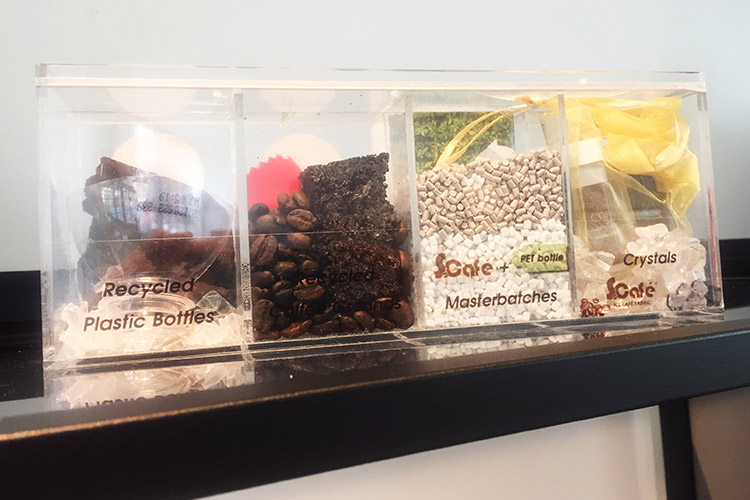 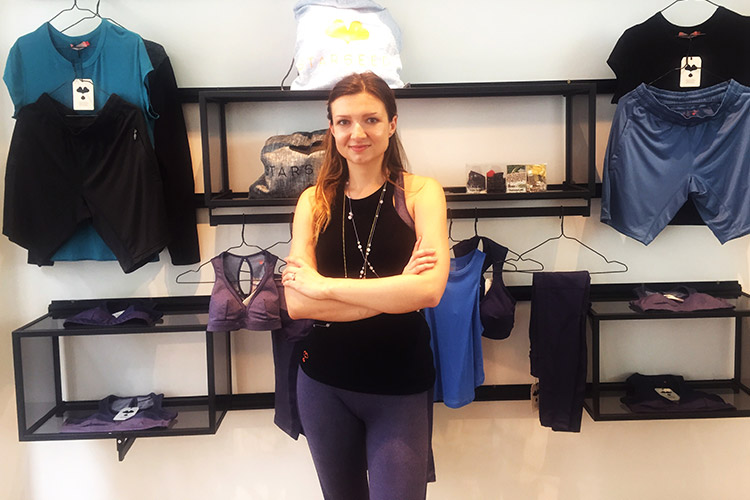 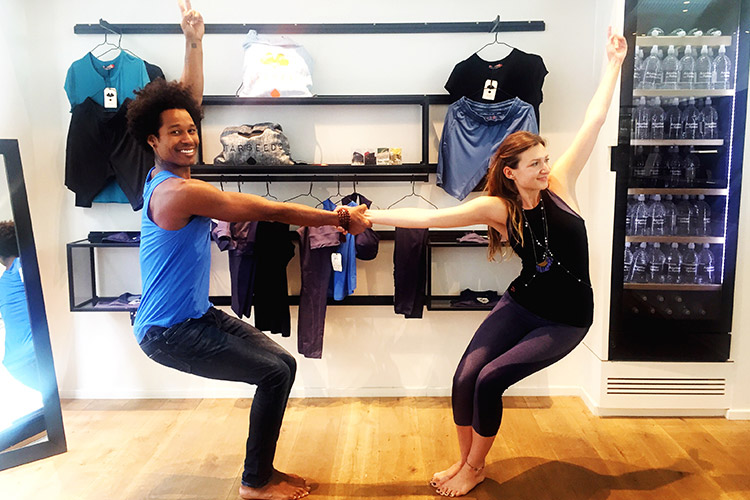 The 75 minute flow class was taken by the remarkable Marc Laws II (who I missed at Sweatlife Festival). In a studio that was heated by the energy of the previous class, I sweated more than I did from boxing and a bootcamp that I did earlier during the week. It was at that point that I really wished I was wearing clothing made from recycled and sustainably produced coffee waste because it’s odour controlling, temperature controlling and super comfortable!

The class incorporated working in pairs, which I’d never done before in yoga and was really pleasantly surprised at how much more effective practice was with the help of a stranger. Starting off with some high-fives, to partnered stretching, to using their shoulder as a pillow (I so willingly nearly fell asleep on this stranger!); feeling at ease rather than painfully afraid and uncomfortable around strangers was a revelation. (Good old yoga, reassuring me I’m not actually devoid of warm feelings. I’m one step away from unwarranted hugging.) I feel like the class was a metaphor for exercising conscious decision making..

Natalia talked to me about the materials used to make the beautiful clothing. After years of experimenting with recycled polyester and coffee beans, the clothing has evolved from being like outdoor wear to comfortable fitness wear. “After wearing this kind of clothing, you’ll never want to go back to wearing anything else..”

Looking at my TK Maxx leggings I felt as awkward and ashamed as I did that one time I went to a vegan festival wearing UGG boots. (I got them years ago, prior to the days that I developed more morals.) I don’t think I like doing things by halves any more… And my sister is always telling me that I need a better fitness wardrobe…

Starseeds with Marc Laws II was one of a series of charity yoga flows organised by Starseeds. The next one is on 20th August from 2.30pm in Battersea Park!