On Saturday 15th November, Amy and I trekked to the deepest darkest depths of Plaistow to watch roller derby in London. We wouldn’t normally write about just watching stuff – we’d rather be doing, but there’s a reason for this which I’ll come to later…

In fact, it’s a sign of my ignorance when I turned up to the aptly named Brawlroom Blitz to watch The London Rockin’ Rollers VS The Birmingham Blitz Dames, that I was puzzled not to see a ball, or a puck or anything like that; it turns out the player called a Jammer on each team IS essentially the ball. Think of it as a mix between British Bulldogs and rugby, except on wheels and with a modicum of fancy dress.

The match was held at Newham Leisure Centre in their sports hall; spectators sit on raised benches on one side whilst the action takes place before them, loosely held in via blue tape on the floor that marks the oval arena. This has the feel of a school fete – there are trestle tables at the entrance of the hall selling Rockin’ Rollers and Birmingham Blitz merchandise, rock n roll styled gift cards (you know the ones, with swallows and skulls and bright colours), cupcakes (mmm), brownies (mmmmm) and skate accessories. The audience were intriguing too (it turns out there were a lot of people who played, spectating) – there’s definitely a strong ‘look’ for these roller derby fans (I can’t say if it’s across the whole sport or just this match) – think a mix of goth, punk and rock n roll. It’s fabulous for people watching! 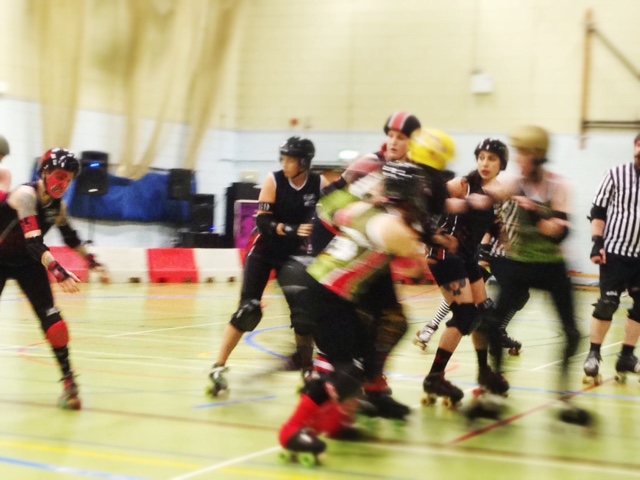 The Blockers on the lookout for the Jammer coming through

But back to the match… the first thing I thought when I got there was ‘what on earth is going on’ and ‘does that girl have a skull for a face?’ The first question took a little longer to answer than the first (yes, she did). Once I’d gotten over the shock of realizing there wasn’t a ball and with the help of Amy (who’d gotten there for the start of the match) and the very useful Brawlroom Blitz leaflet, we figured it was all about each team getting the person in the Starred helmet (the Jammer) to get past as many of her opponents’ ‘Blockers’ as possible. There’s also the Pivot who wears a helmet with a stripe on; we’ll have to work out what she does at our next match (our brains can only handle one thing at a time).

The second half of the match proved to be frenetic, thrilling and closely fought with London Rockin’ Rollers pipping the Birmingham Blitz Dames to the post with a 166 to 148 win. (Again, we’re not sure of scoring, but we do know who won!) There was shouting, chanting, thundering of feet and indeed, the teams seemed fuelled by it all – picking up the pace with more falls, smashes and speed than we’d seen before. 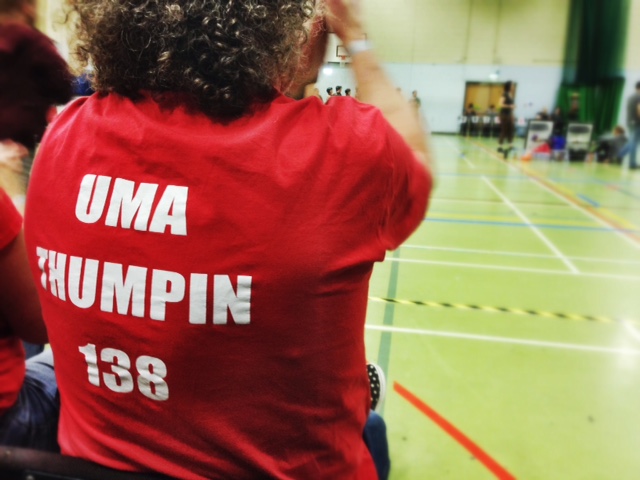 One of the audience supporting roller girl ‘Uma Thumpin’

It really doesn’t matter whether you have a clue what’s going on or not – for a start, most people there are hardcore fans who are more than willing to help you get to grips with the rules. And it’s a fun atmosphere – all the girls have great ‘game names’, including Rammit, Robscene, Bull Terroriseher, Cinder Wrecker etc and it’s all seriously friendly. There’s even beers and pies for those wanting to make a party of it.

In terms of the types of people who do the sport, it really does seem like there’s a whole range of body types; Jammers appear to be slight and fast and Blockers can be any body type at all. Perhaps this is what makes it so popular – it’s fun, includes everyone and gets you fit.

And as for why we were there…? Amy, Hannah and myself will be roller girls ourselves! We’re going to take part in one of the London Rockin’ Rollers training session on 23rd November. We feel like it’s going to properly work our thighs… what do you think? And ooh, what shall our Game Names be..?!

For more information on when the London Rockin’ Rollers’ next match is or to enquire about training, visit their website: http://londonrockinrollers.co.uk/