Today I was fortunate enough to be invited to trial the Microsoft Band, a health and productivity wearable that officially launches in the UK on 15th April.

I met the team at the Cannon Street Nuffield Health, their official UK partner and got set up with a band whilst they explained what it was all about. The first thing they said was that it wasn’t a health tracker. It was so much more than that! Anyway, here’s just a little sneak preview of the Microsoft Band and my initial thoughts. A fuller report will be given so keep an eye on the Tried & Tested section! 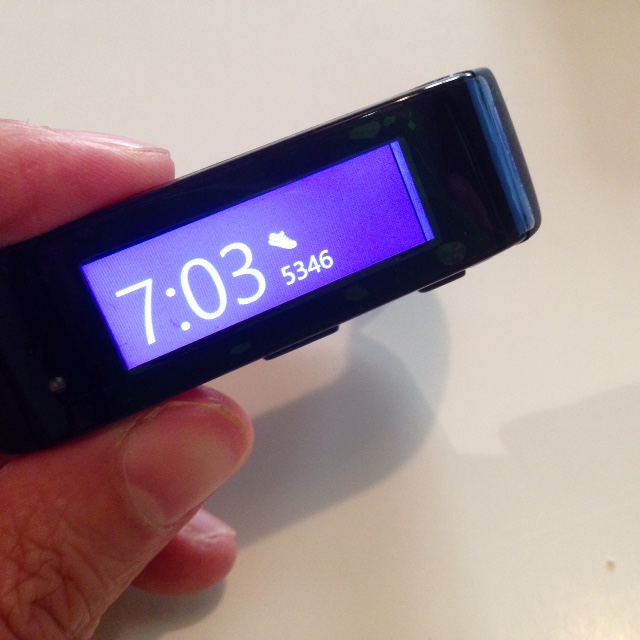 Having rolled the Microsoft Band out in the US, they were keen to expand internationally to another market. The UK made sense; after all, we’re a tech savvy market with a high adoption of wearables. The aim for the Microsoft Band is to get people to get more data about their lifestyle and fitness so that they can set goals and work towards them. It will also track progress so you know when you’re on the right track. Productivity is also key for this wearable – it can sync to your emails, giving you notifications of when one arrives, as it can for your texts and if someone calls. It’s also got a snapshot of your calendar for the day and will alert you 15 minutes before your next meeting so you should never be late!

Why launch a wearable when there’s so many already on the market?

The Microsoft Band wants to be so much more than just a health tracker. As a result, Microsoft looked at ways of making your life easier so as well as just tracking steps and sleep, it also works out whether you’ve burned calories from carbohydrates or fats. In addition, it can also sync to your Starbucks card so the barista can scan the barcode on your band and you can pay that way. Great if you go for a run without your wallet.

It also acts as a personal trainer and can take you through workouts. Plus, it’s got heart rate monitoring which I think sounds excellent so if you’re clever, you can track everyday situations against heart rate and determine what stresses you out the most.

The Microsoft Band also has a rather canny app which is the UV detector. When activated, this tells you the UV levels so there’s no excuse for sunburn!

What makes it different from all the rest?

I think I explained all sorts of reasons why it’s different above. Out of all the fitness trackers I’ve heard about and tried, this seems to be the most advanced so far. And the fact that it combines a watch functionality (I hate fitness trackers that don’t have this!), as well as a whole bunch of other tools makes it unique in the field.

They’re also the only wearable to partner with a major gym. And Nuffield Health is renowned for being ‘not just a gym’. With its team of specialist health advisors also, using the combination of the band and Nuffield Health’s experts, it can be a powerful way to monitor your health.

At £169.99, it does make it one of the more expensive wearables on the market, but if the heart rate monitor is accurate and with GPS, it doesn’t seem too bad.

My experience so far

I can’t lie, the Microsoft Band is a bit chunk. The main screen is flat and about 2 inches wide and sticks out. I’ll be interested to see how this is to sleep with – I currently have the Misfit and even though that’s quite flat I can sometimes ‘notice’ it, especially as I often sleep on my left arm.

I also also a little disappointed by the name. The Microsoft Band. Come on, Microsoft, have some imagination! You do get to name your device, however. Mine is no longer ‘Eliza’s device’ and now answers to the name of Stan.

Look you lucky people, here’s a sneak preview of the Microsoft Band which will be coming out on 15th April. It’s not hurt a health tracker but can also help with productivity too. And they’ve packed so much into this wearable tech – there’s a watch (obvs) with basic pedometer but when you scroll you can see any text messages, latest emails, missed calls, your calendar, track your activity, download a workout and set an alarm to gently wake you up. Highlight for me is the fact it tracks heart rate and can also let you know whether you’ve burnt calories from fat or carbs. Pretty impressive so far. But we’ll be testing it out so if you’ve got any questions, let us know and we’ll try and find out for you! ~ @wabbitpie

One thing the Microsoft Band has also made me realise is how many shit emails I subscribe to – so I’m going to be doing a lot of unsubscribing over the next few days! Aside from those two points, I was really impressed with the rest of the functionality – I LOVE the idea that you can download a workout and the band will take you through it. It removes the need for carrying your workout on your phone or on pieces of paper. I imagine it’ll also be great for those who want to get fitter but aren’t sure what to do when they get to the gym and so stick to their usual routine.

I also discovered how to change the background colour which amused me for several minutes.

These are all the questions I asked the team myself.

What if I don’t have a Microsoft Account?
You will have to set one up to use the band.

How do you charge the Microsoft Band?
It comes with a black cable that fits into the USB port of your computer. Or a plug.

How often does it need charging?
Approximately every 2 days.

How long does it take to charge?
Around 1 – 1.5 hours to reach a full charge.

Does it automatically track sleep?
No, you have to press the sleep button before you go to sleep.

I don’t want to get bombarded with email notifications. Can I turn it off?
Absolutely. You can go into the settings on the phone app and choose which apps you would like on your band.

Can I reply to emails / texts and phone people?
Not at the moment. You can see snippets of information. This could be useful if you’re at the gym and you leave your phone in the changing room and a call comes through – you know whether you need to break off your session early to call them back or ignore them.

Can I download more than one workout at a time?
No, you can only have one on your device at a time. But they take seconds to download and you can choose from hundreds on the mobile app.

Is it waterproof?
Don’t got swimming in it, but it’s definitely sweat and splash resistant.

Can you add your own workout to the device?
It’s a question that they’ve been asked a lot. The answer is currently ‘no’, but it’s likely they’ll look to introduce that feature as demand appears high.

The most important question: where can I buy?

The £169.99 Microsoft Band will be available from Amazon, Currys PC World, the Microsoft Store and via O2.