The Misfit Shine doesn’t look like a fitness tracker. For some, this may be a good thing but others often think of a fitness tracker like a status symbol so they like to wear theirs with pride. 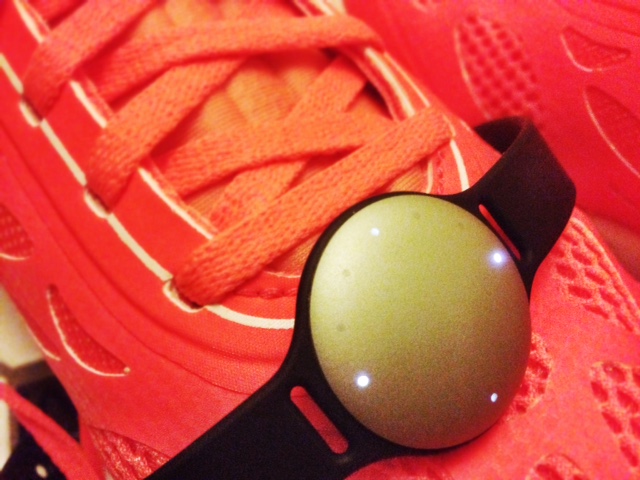 For me, the bit I like most about the Misfit Shine is the clock. YES THERE’S A CLOCK! As someone who doesn’t wear a watch, it’s amazing having one that’s also combined into a fitness tracker. The Misfit Shine is essentially a round, matt piece of technology with 12 tiny lights around the edge, making up a clock. By tapping twice, it lights up your progress for the day (which you can set in the Settings – I’ve set mine to 10,000 steps a day) and then it shows the time. When I say it shows the time – it lights up to signify the hour and then the minutes. It’s awesome.

It also monitors your sleep too. Without you needing to do anything – so there’s no fiddling around with one tap, two taps or a little finger tap dance on your monitor (you know the ones, right?) leaving you frustrated and angry by the time you finally get round to getting to sleep. I’m getting all het up just thinking about it. With the Shine, you can just drift off to sleep… And then sync your phone the next morning to find out how you’ve slept.

One issue that the Misfit Shine also doesn’t have is the need to recharge it. I initially thought it would be more annoying to have a battery but you know what? It’s not. It’s amazing. I’ve listened to friends so many times complain about how they’ve discovered they’ve been walking their legs off only to realise their fitness tracker was out of batter and therefore not even counting their steps. Ha.

Syncing the tracker is also easy. All you have to do is place the tracker on the app as indicated on your phone and tap. It syncs and you’re ready to go!

There are some annoying elements to the Shine, however. Because the tracker slots into your bracelet, held in place by the ridge that runs around the circumference, it can fall out. I’d heard this happening to other people. And then it happened to me. I came out of the underground and a few minutes later realized that where my teal Misfit Shine once sat, there was just a hole to my bare skin. All I’d say is LOOK AFTER IT. (I had to get a new one, of course but it still pained me). The Misfit Shine has to be removable – part of its appeal is that it can also be attached to another type of strap.

Accuracy-wise, I don’t think it scores too highly. But then again, I’m strangely less concerned with accuracy – my reasons for having a fitness tracker are to ensure I’m more active than I’d normally be. I’ll admit, there are some days when I’m working from home where I’m glued to my laptop and I barely leave the house. It’s days like those where my Misfit Shine really come in handy.

Here’s a lowdown on the pros and cons of the Misfit Shine:

Pros: Doubles up as a watch, doesn’t look like a fitness tracker, automatically records sleep, uses a battery rather than recharges

Cons: Device can slip from it’s bracelet, doesn’t sync up to as many apps as some other fitness trackers do although it has all the main ones, less of a community feel than others. It also seems to scratch easily – or I’m just a klutz.

I have to say I did find it hard to come up with cons – my main one is the fact that it can slip from the bracelet.

Where to buy: John Lewis
How much: £79.95
Who’s it for? Anyone who wants a classy reminder to be more active