“What the hell is aquAllure and poolbiking (other than what I imagine it would be!)?” If this same question (that a friend asked) is going through your head, then you need to read on. What are aquAllure’s pool biking classes all about? 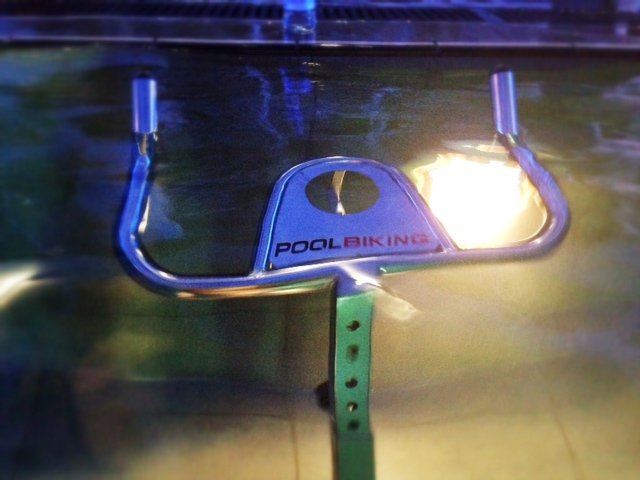 The calm before the splashing.

Amy Burton, another #hellofitty writer, and I found ourselves standing in our swimming suits by the side of the Dolphin Fitness swimming pool watching apprehensively as our metal bikes were lowered into the water. Just moments before, Hugo the instructor had measured us against our bikes and changed them accordingly.

For anyone that knows me, unlike my fishy star sign, I much prefer being on the water than in. Similarly to the way cats don’t like getting their paws wet, neither do I. So it was with great relief to discover that aquAllure’s poolbiking didn’t let your hair get wet. Unless you have plaits, but more about that later. 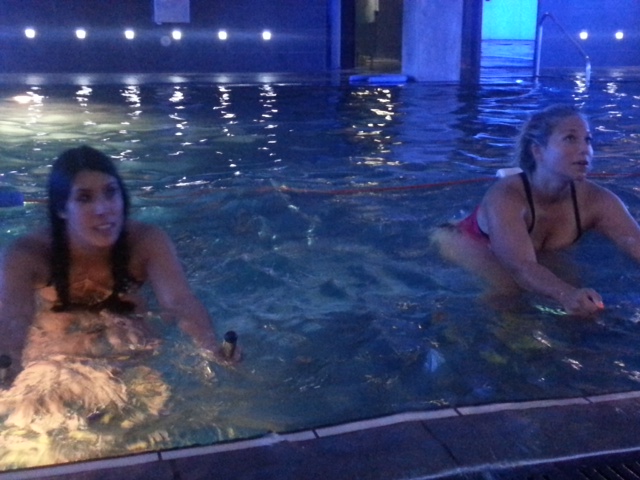 Hugo sat on his bike, out of the water, and directed the rest of us from his perch. The music started and the cycling began. It is a little trippy when you think about it – it’s evening and you’re in a pool; the water’s reflections and shadows make you feel like you’re in one giant hectic lava lamp. You cycle as you would normally on a spin bike – in fact there were a lot of similarities to spinning. The more we cycled, the faster the music became. There were a couple of times where I wanted to pull Hugo into the water and see if he was still as fast with his hand movements as he was on land – as someone who likes to ‘keep up’ it can get frustrating when you’re trying to pace yourself with someone who’s got an advantage of 12 x less resistance. However, after thinking it through, I decided that having to get off my bike, wade to the side, haul myself out and then rugby tackle Hugo was altogether too much effort. I stayed on my bike and carried on cycle-paddling.

Unlike spinning, your arms get more of a workout too – using the natural resistance of the water, your arms are just as hard at work as your legs. There’s also more that you can do on the bike than I first thought – after a jolly good workout to Gangham Style, you slide off the bike and do some core exercises hanging off the back. It’s difficult at first to trust that your bike will hold and you won’t tip over and drown but you soon get the hang of it. Most of the times during this part I had no idea whether what I was doing was correct as you can’t really see what others are up to under the blurry water but I imagine Hugo had a lot of fun watching us flail around.

To finish, we had some good stretches. All in all, my legs ached more than I thought they would and my arms felt heavy. Surprisingly enough, this didn’t translate to any aches the next day, which was nice. To start with, I spent a while trying not to get the ends of my plaits wet but there are bigger things to worry about once you start pedaling and I found that only occasionally did a plait become so wayward that it slapped me in the face like a wet fish.

The proposed benefits are also enough to outweigh any worries – aquaAllure and poolbiking promises less cellulite, up to 800 calories burned per session, increased blood flow and a kinder workout for your joints. Without wearing one of those special watches I can’t say how many calories I burnt but I certainly felt like I had worked out. 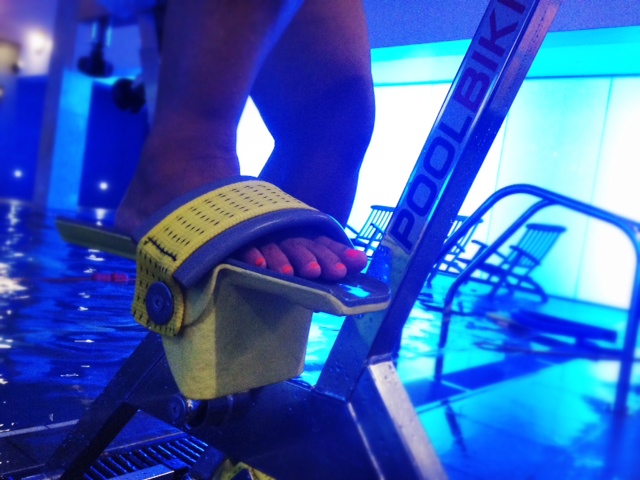 Instead of normal pedals, there are flipper pedals.

Having spoken to a PT who commented that one of his clients who had tried it had thought it wasn’t as much of a workout as dry spinning, I came to the conclusion that either they had machine legs or they weren’t trying hard enough for I felt the burn early on. I also spent a lot of time worrying about one of my boobs breaking free from my bikini top. Putting this worry aside, however, it’s undeniable that it is a workout, although one without any aches and pains after. For some, this may be a sign that they have not worked out enough.

I think the only way to tell would be to include this as part of a routine for 3 months and track the changes. For anyone who is looking for a workout that is easy on joints, then aquAllure should be on your list. I imagine it’s also good for those want all over gentle toning, those who are pregnant and those who are returning to exercise after a break.

Top tip: Keep hydrated throughout – keep a bottle of water on the side.
Who should do it: Those who like a workout that doesn’t leave them unable to walk the next day.
What to wear: Either a sports bikini or a sports bra as there is a lot of boob jiggling so a sturdy top is recommended.
Price: £20 for a 45 minute session.
Where: Dolphin Fitness Club, Pimlico
Find out more: http://aquallure.co.uk/

aquAllure and poolbiking was brought to the UK by Dorine Denjean, an expat living in London who missed her aqua cycling routine:

“I decided to set up aquAllure and bring the concept to the UK as until now I feel fitness fans like me have been really missing out. When I lived in France, I relied on aqua-cycling classes to get the results I wanted – improved fitness and reduced cellulite. As an added bonus, it gave me a much better quality of sleep post-work-out. I truly believe there’s nothing quite like it.”

In countries across Europe, such as France and Italy, and also in Brazil, water cycling is already a big craze, with some swimming pools specifically built for such exercise.