On the day of one of the muddiest obstacle courses in the UK, our #hellofitty Nuts Challenge team were challenged even before we started: we lost half our troupe, with 2 pulling out on the day itself – one had to go abroad for a work trip, one decided writing a book was more important and the other had a nasty accident that involved a night in A&E and a split head…

Hopefully, our now shrunk team of 3 wouldn’t fall amiss of anything else. Knowing that there would be lots of uneven surfaces, a sprained ankle was my biggest fear for us. Indeed, we passed several of the ‘fallen’ who lay along the way, looked after by their comrades.

The Nuts Challenge is a 7k obstacle course race that takes place twice a year over a weekend down on a farm in Dorking Surrey. Hardcore nutters can opt to take on 2 or 3 laps, instead of 1. The insane choose 4. Having taken part in the March one earlier this year, I knew what to expect but for the rest of the team, it would be an entirely new experience. And even though Rosie had completed Beast in the East and Back to the Trenches and Milly had taken part in the Helly Hanson Challenge and a Zombie run, there were two things that make the Nuts Challenge unique – mud. Everywhere. And the unrelenting number of obstacles.

To give you an idea, guess how long a 7k obstacle race took us?

Our wave started at 11.20am and the first obstacle Milly, Rosie and I hit was a quick dip in a river – something we’d end up seeing a lot more of. And drinking. This immediately left us entirely soaked up to our waist. And that was a gentle introduction into what we were in for… 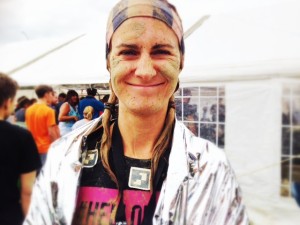 Milly Withington keeping warm in her mud and silver blanket.

Upon passing the 2k mark, there were cries of disbelief from us and the people around us. We’d already hopped over tyres, slid down mudbanks, wrenched fingers clawing our way up mudbanks, tumbled over metal oil cans and waded through yet more river water. How can this only be 2k? And that was the running theme throughout – whilst it was a lot of fun (at least I thought so, Milly seemed to be smiling and it was hard to tell with Rosie – she was grunting a but but that was about it) it was like we’d entered a perpetual world of obstacles where no matter how fast we tried, we didn’t get any nearer the finish line.

Compared to last year, the obstacles and route were pretty much the same – with one exception; there was the addition of a slide. I call it a slide but in reality it was a layer of tyres placed across a strategically steep hill, covered in tarpaulin. At the bottom was a pit full of what appeared to look and smell like a sick cow’s freshly released bowels. We slid off together, bounced a bit and ended up in a tangled, drenched heap. “What the f*** was that? It’s f***ing criminal! F***!” These were the first and only words out of Rosie’s mouth throughout the race. It had obviously made an impact. Although to say it was a positive impact is debatable.

According to Rosie, the number of obstacles only detracted from the fun factor. For Milly, this was the muddiest she had ever been in her life. For me, I loved it. Apart from the queues – one thing I regret is starting at the back; more than half an hour of our time was made up of waiting. And the queues are unpleasant – you easily get cold and that’s when all your aches and pains start to make themselves known. We would know for next time…

Take a look at www.thenutschallenge.co.uk for details of the next race.

Do you want to take part in the next Nuts Challenge? Or is there another that you’re keen to do? Let us know if you need a partner or a team – we’d be only too happy to join you!