As someone who loves water as much as cats (ie. not at all), it’s perhaps a little strange that I’m reviewing waterproof Sony headphones. These would have been perfect when I was a kid, loved to wear clothes in the bath and lie with the majority of my head underwater pretending I was a hippo. However, I was going on holiday to Egypt and was staying in a hotel with not one, but EIGHTEEN swimming pools; it would have been rude not to dip a toe in… 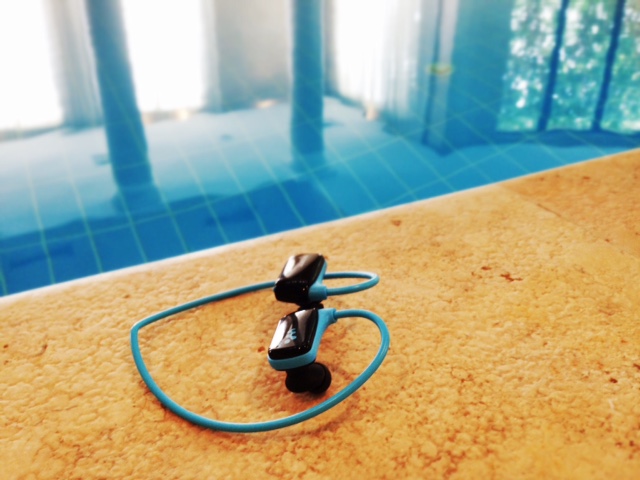 The Sony waterproof headphones retail at £55 and come in 3 different colours: white, black and blue. They resemble a reverse headband – with a plastic ‘band’ that goes around the back of your head to support the earphones. When you first take them out their box, they feel a bit flimsy and there’s a definite need to read the instructions first. Just trying to get them in my ears took several minutes.

Loading the headphones up with music was so simple, any technophobe would be at ease. I uploaded music (a very random mix that I love but hope no one else ever listens to. And yes, it did involve Disney…) from my laptop but it also allows you to add from iTunes. It has 4GB of memory, boasts 8 hours playback (who would ever need that long?) and a fast charge time. I didn’t test the 9 hour playback but I ran out of music before I ran out of space and it’s right, it didn’t take long to charge.

I never believe it when a product says ‘waterproof’. I just don’t get that they can make it so no water whatsoever gets in. And it’s weird dunking them in the water. Putting the headphones on can be fiddly but it really helped that I’d put them on back at 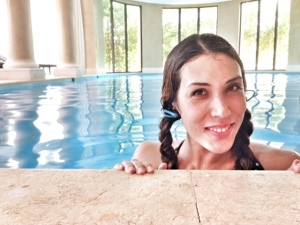 the hotel to test them out. Whilst you can’t pick and choose what song you listen you, you can skip, go back and there’s a shuffle function. However, the buttons are rather tiny so you either need nails or really little, strong fingers. I imagine people like my boyfriend would struggle even just switching it on. The headphones also come with a little black band that helps make it smaller to fit your head better – to be honest, this is a little crude and I didn’t find it made much of a difference. I think that most hardcore swimmers could secure it quite easily using the strap of their goggles.

It’s very strange wearing wearphones in water but not unpleasant. Music quality is clear and it certainly made swimming more enjoyable. I’m hardly a fast swimmer (and I normally stick to breaststroke) but during the more lively songs there was a noticeable increase in pace. I really don’t think I’ve enjoyed swimming so much for a long time. I tried it out in both a very quiet indoor spa pool and also a larger outdoor pool and even with people talking and shouting around you, the headphones drown it out. It’s a bit like swimming in a little bubble. If I could swim to work in my music bubble, I totally would!

The verdict: I wasn’t sure I’d be bothered about listening to music whilst I swam but not only did I swim faster, I stayed in for longer. They’re comfy enough that you easily forget that you’re wearing them. All in all, if I were going to add swimming to my fitness regime, I would consider these an essential part of my equipment.

Who should buy it? Anyone who swims a lot and enjoys listening to music.

Top tip: Practice putting the headphones on first, before you get in the water.

Where to buy: Amazon