Whilst running in the rain is a big turn-off for many, especially during these cold winter months, I have a new toy that might just be the encouragement that I need. Here is what I thought of the Speedo Aquabeat… 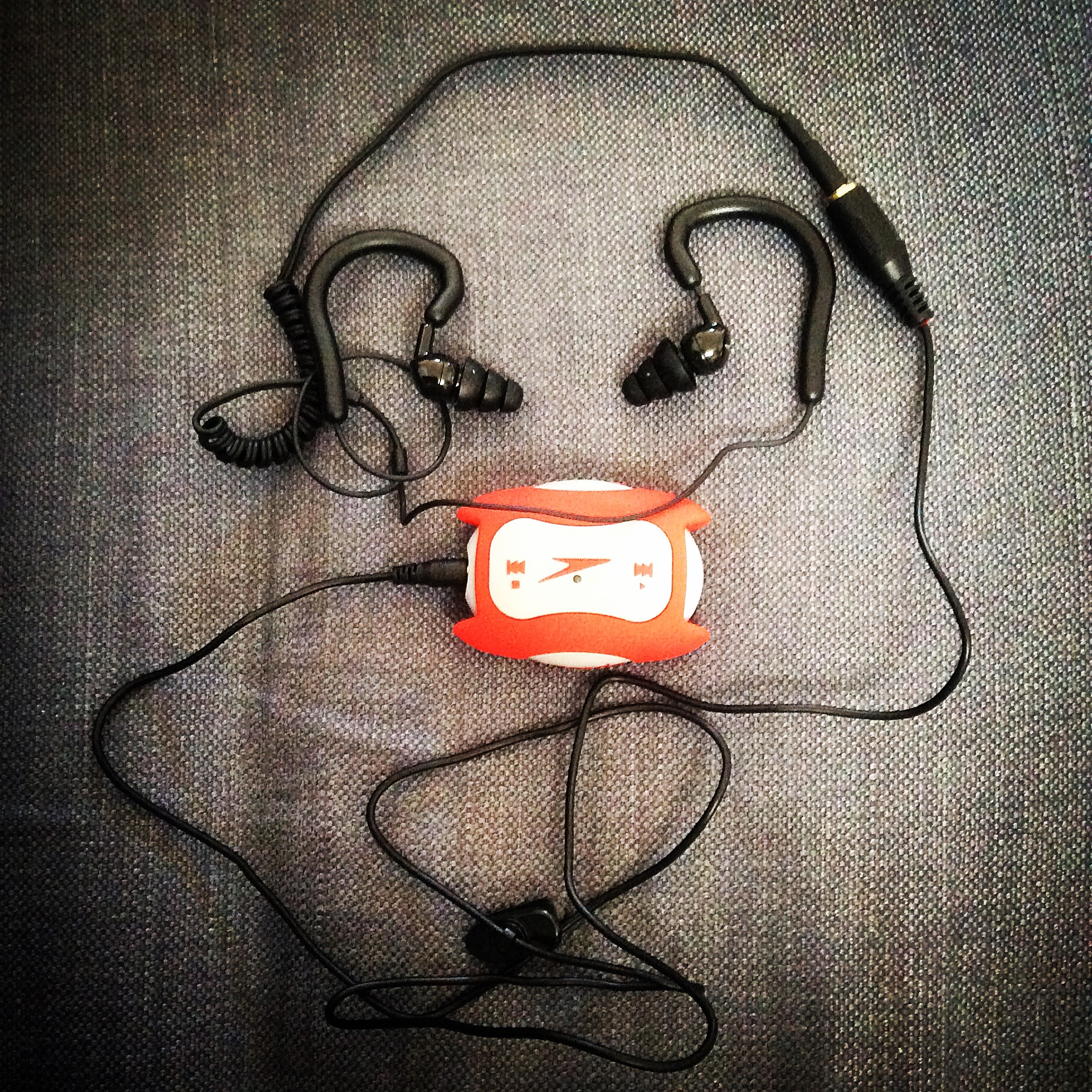 My Speedo Aquabeat arrived nesting comfortably inside a small box. I took out the MP3 Player, earphones, USB connector and a quick start guide which proved useful and easy to follow. I eagerly charged my Aquabeat on my laptop which didn’t take long at all. Reading the instructions, I quickly learned how to add music to my player. I created a folder on my external hard-drive and dragged my chosen music into it. The Speedo folder appeared on my home screen when the player was connected, so I dragged the music folder, that I had created, into this. Whilst this was an arduous task, as I have a couple thousand songs on my computer to choose from, you only need to do this once. It does not sync and pick a selection of songs, like my other MP3 player, so this does take a while, however, you can pick exactly what songs you want for your exercise and even create several folders for different workouts. Once you’ve set this up, it will become much quicker to chop and change, but it does mean initially taking the time to create your play-lists.

Now I was ready to go! There is a clip to attach the MP3 player to your swimming goggles, but it does not prove useful for running as it is very small, so I placed the Aquabeat in my pocket. The earphones were slightly fiddly and will take some getting used to, as they wrap around your ears. The original Aquabeat earphones were made of a very rigid material, so you would have to manipulate your ears to get the earphones on correctly. However, these updated earphones are made to be more flexible and are much easier to use. Being waterproof, the ear-buds are shaped like earplugs you wear when you swim. I have not worn these before, so found them a little uncomfortable, but again, I think it is something that I will get used to. The rainfall did not impede the player, but instead allowed me to enjoy listening to my music whilst running around the park, without worrying that it was getting wet! 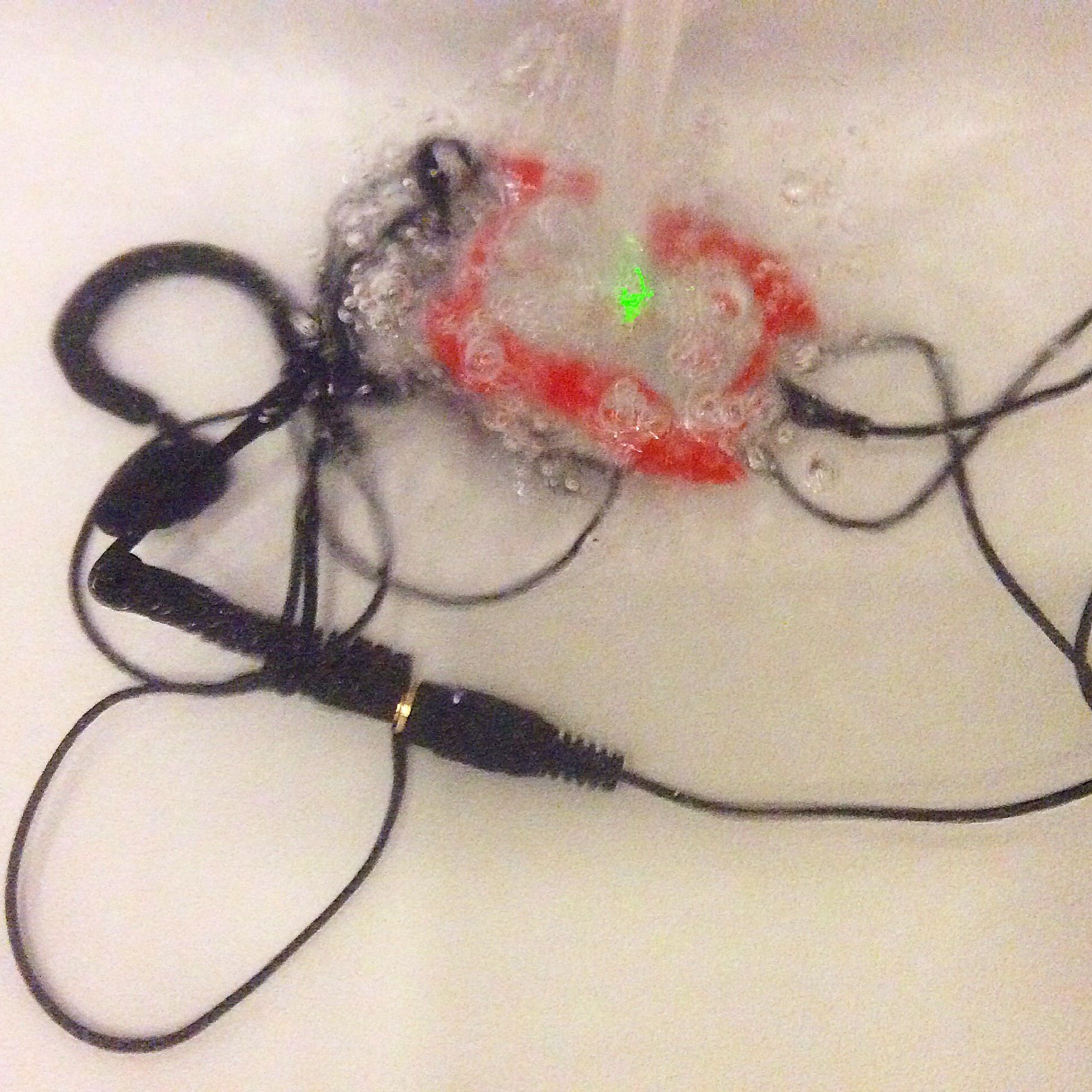 I love to go swimming, but often find the monotony of laps rather discouraging. I decided to try out my Aquabeat to see if I could prolong exercise during this cold and rainy winter. Eagerly, I jumped into the pool with the MP3 player nestled in my swimsuit, as I had forgotten my goggles for the player to attach to! The player is a little chunky, so it did poke out a tad, but I felt secure leaving it this way in a pool; if it fell out, I would easily be able to retrieve it, however, I would not want the risk of doing this in the ocean. Strong waves can pluck anything from you and can then prove impossible to find so I would prefer a more secure way of attaching the player to my suit.

I really enjoyed my laps whilst using the Aquabeat, but the earpieces would often push out of my ears. Although this was irritating, the music gave me the encouragement to swim further because as each new song started, I convinced myself to swim until it was over! The variety of songs I had downloaded was perfect for keeping me active and engaged. The songs with a heavy beat made me kick harder in front crawl in the fast lane, whereas the softer songs were ideal for swimming in breast stroke in the slower lane. The Aquabeat’s sound worked well under the water, but did start to fade if I dove down more than two meters.

My choice of music kept me focused and made me feel like I was in my own bubble; it was amazing. Despite a few glares of curiosity, I would definitely take the Aquabeat swimming with me regularly. I even took the Aquabeat into the shower with me after my swim! For my next adventure, I want to take my Aquabeat skiing, as it will cope with being dropped in the snow, should I fall! Music improves skiing as it allows you to ski with rhythm, however, I would only recommend this to advance skiers as awareness on the slopes is paramount.

Ease of use: Plug in to charge and upload takes some time initially, but the instructions are clear. 7
Ability to improve workout: My music kept me in the pool longer. A waterproof MP3 player encourages me to run in the rain! 9
Value for money: Competitive price, but other options are less cumbersome and are less expensive. 7
Overall rating: 8
How Much? £39.99
Buy here: Amazon

*Health Advice: Please be aware of your surroundings when using the Aquabeat.  Consult with your physician before beginning any exercise program.