Healthy Living London talks to Ilona Stubley, a Glasgow based city worker who can drive a golf ball the distance of a football pitch three and a half times over! Already the UK long drive Champion, she recently broke the women’s long drive world record with a remarkable 460.94 yard drive, woah! We got the chance to ask her a few questions about what she loves about golf and the long drive… 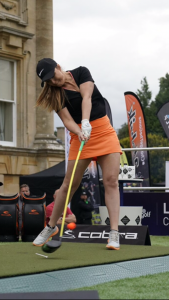 Ilona Stubley keeps her head down, focused on the long drive.

The tennis is over, the football has finally finished, cycling keeps peddling on and the golf has just begun! This summer has already been packed with so much sport and it’s still only July! Whenever sport is on TV, I suddenly get inspired and think, I want to do that. (This is especially entertaining when the Olympics are on and I end up with a few bruises… they make it look so easy!) However, with the sun still beating down on us, I’m finding it quite hard to muster up the strength to do anything too exerting. Golf is the perfect sport for getting outside and going for a long walk, or rummage if you frequently lose the ball in the long grass! Golf is a low-impact sport, that gets you moving, but doesn’t knacker you out. Plus, the driving range is an excellent place to start if you are just a beginner. Why else do so many retired people spend their twilight years on the green? Granted, they often use a golf cart, but at least they’re getting the fresh air!

An Interview With Ilona Stubley, The UK Long Drive Champion:

Will it get me fit?

Yes. Golfers walk an average of 4-7 miles a round. Golf is a moderate intensity activity which means you are reducing your risk of certain chronic conditions.

How much does it cost to get started? What are the costs involved?

It can cost as little as a basket of balls at the range and the hire of a club. If you are looking to join a club, there is the cost of the annual subscription and you would want to buy your own set of clubs, but this can be done relatively cheaply if you aren’t looking to buy a brand new set.

I always thought it was predominantly for old men who did business – if I started playing would I have any women my own age to play with?

Yes, you tend to find that the women’s sections of golf clubs are very active and are very welcoming to new members. A lot of driving ranges also have ladies’ nights to encourage women’s participation. These are great as many women enjoy the opportunity to learn in a women-only environment and it gives them the ability to meet more people to play with.

What’s the best way to get started?

A lesson with a PGA pro at the local club or driving range is a good way to get started as they can help with the basics of the game and will be able to put you in touch with other female golfers.

I’ve been lucky to play some amazing courses, but Loch Lomond has definitely been my favourite. I have only played it once though so would love to play there again.

If I challenged you to a game of crazy golf, who would win?

I am super competitive over everything so I’m going to say me.

How did you get into golf? How long have you played?

My dad got me into golf. I used to go to the driving range with him now and again but I didn’t really start playing properly until I was 16. I only took up Long Drive in April of 2017 and won the UK final in August 2017.

I like the challenge of golf, that you have to master all the different elements of the game and the feeling when you put together a good round. I love that Long Drive is fast paced and the fun atmosphere around it. When players are hitting balls, music is playing and there is a good atmosphere from the crowd.

Had you been trying to break the record for a while?

It had never crossed my mind to do anything like that. But American Golf approached me to say they were putting on the record attempt and asked if I would like to be involved, obviously I jumped at the chance.

Top tips for getting a hole in one?

I don’t know as I have never had one. So if you get any tips, please pass them on to me.

Why do you think it’s less popular for women than men?

I think its the perception of the game that it’s for men. In the media it is mostly the men that have the coverage so there haven’t been as many role models for girls in the game to look up to. If you asked someone to name a professional golfer they will most likely name a male. The women’s game needs to be promoted a lot more.  It is good that there are initiatives now to grow the game with women and girls, which will hopefully encourage more females into the sport.

How can we get more women involved?

I think a lot of people are time poor these days and aren’t able to give 4 hours to play a round of golf, so it’s creating different options for people to still get involved. I also think the thought of joining a golf club or going to the driving range can be quite intimidating for people as the majority of people there will be men. I know some women that don’t like to go to the range as they feel they won’t be very good at hitting the ball and think all the men will be watching.  Even something as small as having a few women only bays at the range may help in getting more people to take up golf. I think the biggest thing is making women feel comfortable in a golfing environment. 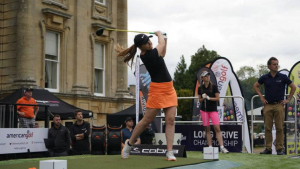 Ilona Stubley is the reigning American Golf UK Long Drive champion. Visit www.americangolf.co.uk to upgrade your golf bag and find a store near you.

*Health Advice: It is advisable to consult with your doctor before beginning any exercise program.