Did Eliza and Fiona end up alive or infected? Say what? Well, when you’re in a world where there’s an outbreak of killer zombies, it’s a pretty important question. 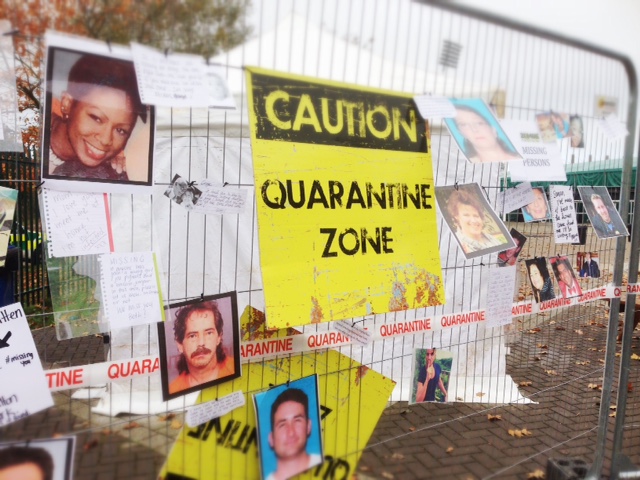 The last time I was chased, I was 6 years old, it was playtime and some horrid little gawky boy wanted to look up my skirt. Yes, whilst most schools had kiss-chase, we played something quite different. There was a reason why boys were made to leave after the age of 8.

So the fact that I would voluntarily be plunging myself into a situation where someone would be chasing me didn’t bring back the best of memories. Let alone the fact that the gawky boy would be replaced by hundreds of pale-faced, screwy-eyed zombies. At least fellow #hellofitty member, Fiona, would be racing with me.

With our heat taking place at 10am, Fi and I turned up at Allianz Park at 9am where we met some other crazy people fitness bloggers, registered and got Fi kitted out with a Jawbone Up so we could track her time (thanks Currys!). The set-up was basic – there was a quarantine area where people registered, a basic food tent (the sausage rolls looked good), toilets and a merchandise section. Whilst the bag-drop was free, it was also unmanned so few people dared leave their things. Who knew what stray zombies would be roaming about when the army-clad organisers had their backs turned. 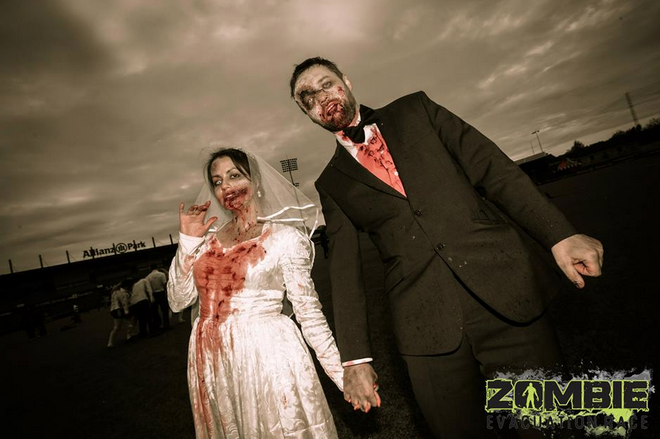 With a spectacular show of theatrics, a very serious member of the army revealed that there had been a zombie outbreak and the last known set of people to enter the area was the medical team… who hadn’t been heard from since… There were squeals from the waiting crowd before we were let loose to fend for ourselves. Around our waist we were equipped with a belt from which 3 brightly coloured banners hung off, attached by Velcro. These were what the zombies were after and once they’d taken them all, we were considered infected.

With zombies watching us as we ran, I certainly set off at a much faster pace than I’ve ever run a 5k. Sadly for me, Fi, a seasoned runner, sped off after a few minutes. I was on my own.

Encountering the first zombies, I practically wet myself. Not only was their make-up full-on (although I must admit, I only saw them out of the corner of my eye – I felt that the less I looked at them, the more invisible I was. It didn’t work.) Whilst some lunged and lurched, others were positively speedy and I had quite a shock when one chased me down a woody path, only to back off once he’d grabbed one of my lives. They never showed sprinting zombies in films!

The 5k trail started at Allianz Park in the stadium before traversing across fields, woody paths and sometimes totally off-piste. Some runners went so off-piste, they ended up off course and had to run back.

It’s hard to deny it wasn’t fun – there were some great outfits (kudos to the guys on inflatable horses) – and similarly to watching scary films, there was a certain, blood-pumping thrill. And watching potential survivors dash through the rugby stadium dodging a plethora of zombies, should be a sport in itself and I’d quite happily watch that than say the football. 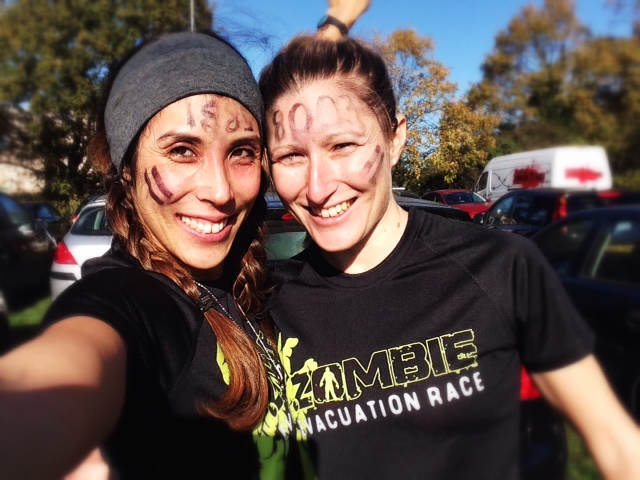 So I didn’t end up free from infection – my last tag got ripped off during the stadium run. I was so close! And Fi, whilst she fared no less well in terms of infection, she did come 2nd out of the 10am heat. I expected no less – she runs fast regardless of whether she’s getting chased or not!

And whilst no one looked up my skirt this time, one rather cheeky boy told me if I’d been wearing a skirt he would have tried to focus his Go-Pro on a stick up there. Ah, this must be the modern kiss-chase… I think I’d rather be a zombie, thanks very much.

The highs: The zombie wedding that we passed. May you remain undead happily ever after.

The lows: The trail could have been laid out better, with clearer markings. At some points there were some serious ankle-twisters as you scrambled through brambles.

A big thank you to Currys for the Jawbone Up and for sending us to combat zombies. It was such a fun, smiley day – and what better way to get fit whilst having fun?! Find out more about how the bloggers took on Zombies using SmartTech >