Nike’s We Own the Night event saw thousands of women and men gathered to race and support. However, what’s really inspiring the masses to take part in such events? The fitness aspect or the cool branding? Read Emma’s We Own the Night review and decide for yourself. 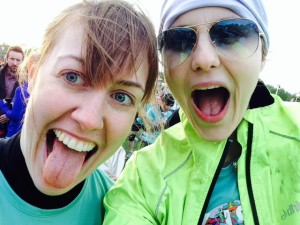 Nike put on a great show on the 10th May at Victoria park for this year’s We Own The Night women’s 10K run. There were thousands of women who ran, many with men in tow made to watch on the sidelines.The traction of this fitness event was remarkable – groups of friends enjoying a Saturday night running before drinking; women of all ages and body types. Nike’s marketing gambit was certainly impressive: we were even made to pick up our race packs on the top floor of the Nike emporium in Oxford Circus (I could not help trying on several items – how did they know?!).

The run itself consisted of two laps of Victoria Park in east London. It had rained all day but luckily turned into a beautiful evening. Neon was everywhere – and spirits were high. The warm up, which consisted of interesting aerobics moves in front of a stage, got the crowd going before we filtered off in our time-based start groups.

Although the general vibe was non-competitive, I aimed my own sights very high at under 45 minutes. I also chose not to run with my friends, against the spirit of the event perhaps, but I was on a mission. It was my second 10K this year, and I’ve been working hard with my personal trainer to build up pace. I started off fast, and felt good focusing on keeping my face relaxed, my head and body aligned correctly, and the balls of my feet hitting the ground instead of my heels.

Unfortunately on the second lap of the park we had to pass all the slower runners, and thus forced off the path in a bid not to knock people over: the only real organisational fail of the whole event. I slowed down dramatically after 6K – and when a friend of mine passed me at 8K I could not keep after her. It was very frustrating. 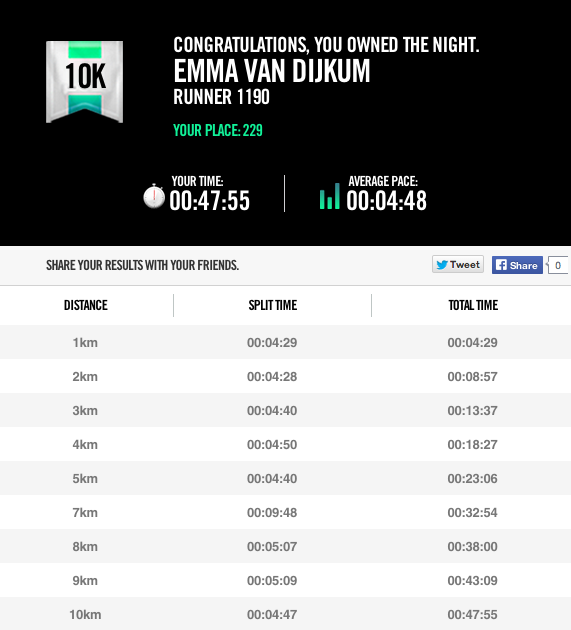 It felt good to pass the finish time, albeit it in 47.55 instead of under 45 minutes. I was exhausted, but felt it had been a good run. I was also chuffed to receive a beautiful necklace as a medal (medals usually end up in my bottom drawer or in the bin), some coconut water, and a glass of champagne, and meet up with my  friends. 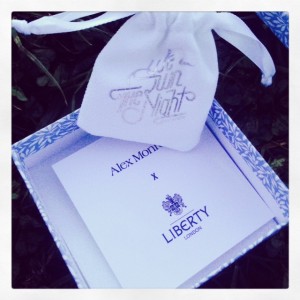 The way I interpret it, the event aims to make running ‘cool’ and ‘accessible’ to the masses, so that women are not physiologically barred from sporting events, or even exercise, by fear of looking stupid, or losing. Which is admirable, and necessary. However, nothing is a purely selfless deed. Nike is not the most successful, fashionable, sporting brand in the world for nothing. The way to make things cool and accessible is to make your runners wear some colourful, fashionable, Nike clothing.  Nike has successfully capitalised,  as only they can, on the women’s health movement. Ingenious really, but also just a really fun night. From the designer post-run necklace, to the compulsory dri-fit tshirt, to the festival arena, it was well worth the £28 entry fee. Even if I then went on to spend £80 on a pair of Nike Frees…

Definitely in for next year!

What are our thoughts? Did you take part in We Own the Night? Had it been a lesser known brand, would you still have done it? Does cool branding make all the difference? Leave your comments below or tweet us @HelloFittyLDN