Healthy Living London loves to find fun ways to exercise, especially as a team. So, when we heard that The Color Run was headed to London, we signed up! What a fun way to spend a Sunday afternoon; running, dancing and even skipping around a 5k whilst been doused in a rainbow of colours!

Top Tips For Participating In The Color Run

Once you’re signed up, The Color Run sends you your complimentary race kit which includes a t-shirt, wrist band, head band, temporary tattoos, a small tube of colorful and glittery face paint, plus all the info you need for the day. 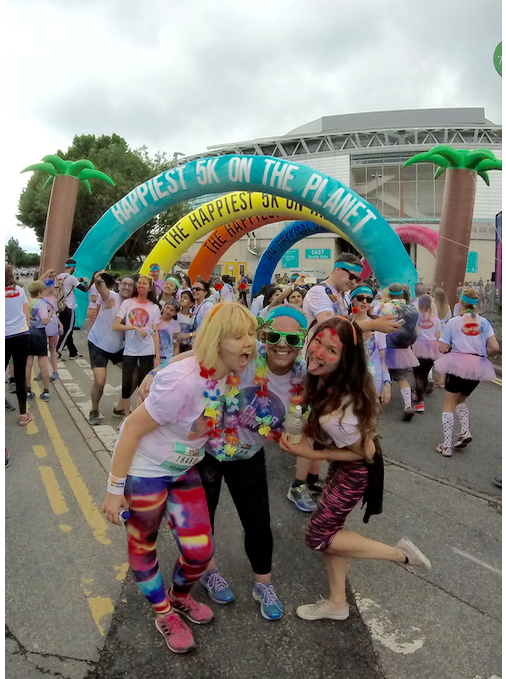 The Color Run is a great way to have a laugh with your family and friends and you’re exercising to boot! I saw a wide range of abilities and ages participating as well as a few dogs which proves that this is the perfect course for beginners to running or exercise as you can walk the distance if you want. The atmosphere is awesome, with smiles as contagious as the colour that consumes your t-shirt! Wear something comfy, that you’re happy to get chalk-like paint powder on, though it does come off in the wash.

The course at Wembley wasn’t particularly interesting as far as sightseeing goes, but there were many distractions from the mundane scenery. A fabulous band was playing the drums which had me dancing by and the Capital zone had tunes blaring out, but I think the course could have done with a few more music stations along the way. The colour zones had everyone laughing and jumping around as the chalky pigment created a cloud of vibrant colour. It does go everywhere, so try to keep your mouth closed! Water is given out at the end, so you can rinse your mouth out.

Our team had a great time meandering around the course. The time flew by and the run was over too soon – you don’t witness me declaring that very often!!! I would love there to be options for a longer run, however you need to have energy for the finish zone! Here, there were a few stands for creative picture opportunities or slow-mos, some fabulous freebies, such as Skittles and Capri-Suns, and the awesome stage area. The tunes were pumping and the presenters on stage were throwing out even more freebies to the hungry crowd. Swarms of finishers were dancing and throwing their colour packs into the air (given to each runner as they cross the finish line), spraying the crowd with a rainbow of dazzling purples, brilliant blues, gorgeous greens and neon pinks. Every so often, the presenters would have a countdown and streamers would shoot out from the stage and everyone would throw colour into the sky at the same time. It looked incredible.

We were lucky with the warm temperature and occasional appearance of the sun, as I’m not sure rain would have had everyone dancing as much as they did. (Though I am sure that rain would swirl into a tie-dye of colours, creating pictures on the pavement before flowing into a stunning river of colour.) The atmosphere was awesome, it felt like we were at a festival. There were even a few food and beverage tents on hand to refuel those that needed it. Water, wet wipes and ponchos were given out to make your journey home more comfortable. The only thing that could have made The Color Run even better would be a reduction in the long lines that led up to the start of the race and the queue that led to the finish line. A more organised start would allow one to know when to head to the starting line, such as each participant wearing a coloured wristband that would dictate your start time. This way, you could spend more time in the fun warm-up zone and not have to queue to begin the run. Or, more entertainment in this queue, to distract the eager participants from their long wait, would be great too. The finish line could have been better organised with a longer exit so that you could collect your color pack, wet wipes and water. I totally missed these handouts as we were been shuffled through en mass, so I had to go back to get mine.

Despite the busy queues, which did add to the anticipation and excitement of the day, I would definitely recommend The Color Run to anyone who likes to have fun. I thought the atmosphere was incredible and the location was easy to get to. It’s coming back to London in September… who’s available? 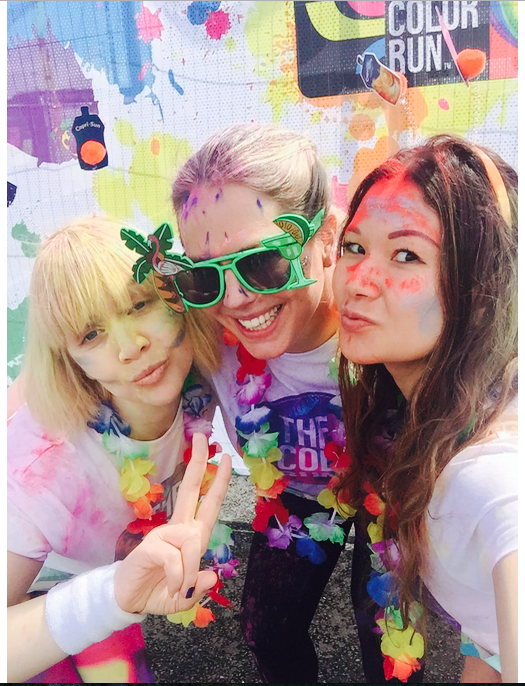 The Color Run is less run and more colour. It’s a great way to get out and have fun whilst getting the body moving in a less intimidating environment. Hear it from someone who can barely run to the post box and back. Having spent the past year fairly sedentary, due to being chained to a laptop juggling studying with setting up a business, I’ve watched my fitness hit an all time low. So when the opportunity of running a 5k for fun came up I jumped at it (metaphorically speaking!) and boy am I glad I did.

The day began with being kitted out in all the paraphernalia, rapidly followed by fun in the slow mo paint photobooth. Then the warm up commenced – think 90s aerobics on mass to Justin Bieber! Whether you’re a seasoned runner or not, it’s pretty impossible to not be in good spirits before the start line. Then the run kicked off. The five of us giggled, jogged, walked and danced our way round the course. We admittedly didn’t jog non-stop, as we were having too much fun playing around at the various paint points! The steel band was a highlight!! Talk about feeling glad to be alive!!! By the time we hit the finish, we were giggling like school kids and looked like we’d been hanging out with ‘Rainbow Brite’. Onwards to the disco, dancing like we don’t care in less than fashionable attire!!!

Despite rebelling from running for months, The Color Run was the perfect way to break the sedentary cycle, so much so that two days later (and feeling less fearful) when a 5k group jog asked me to join, I immediately emailed ‘yes!’. I am grateful for The Color Run as I was reminded and excited for the exhilaration that running brings. 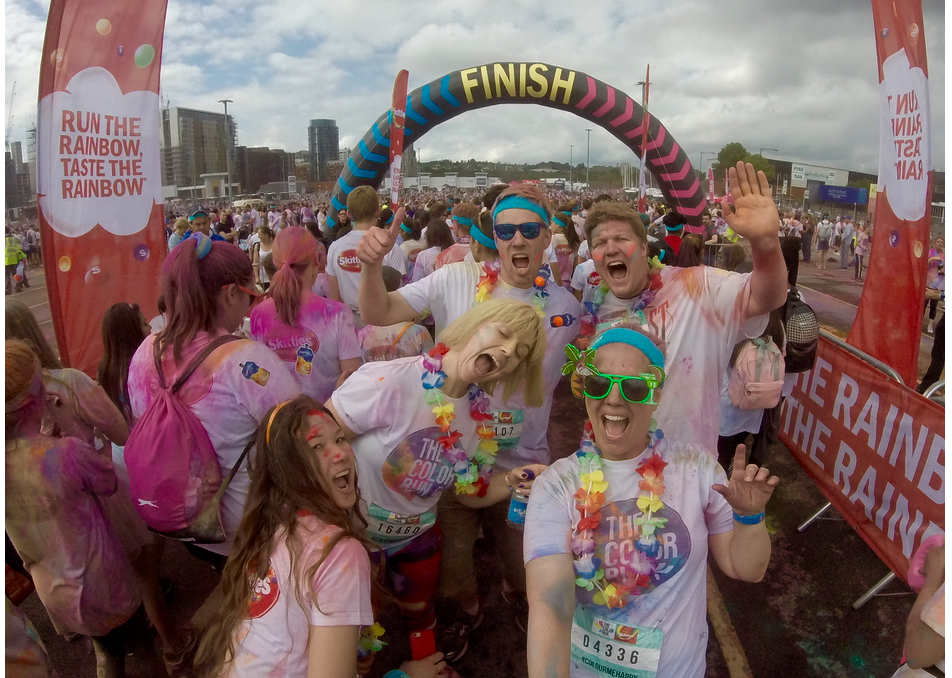 The last time I participated in The Color Run was last year and coincidentally, that’s the last time I did any running! The Color Run is the perfect race for anyone who’s not a strong runner, but it’s also fine for anyone who wants a short sprint – though prepare for the ten minute shuffle to the finish line, it’s a pretty crowded and popular race! Don’t despair too much at the children outrunning you, they’re too young to be running with a hangover! And embrace the headbands and face-paint – you’ll look weird if you don’t!

It’s not competitive and the emphasis is on having fun. Just remember to close your eyes and mouth when running through the colour stations. (Or don’t, if you’re a masochist and you feel the day lacks the physical pain and discomfort of other races…) 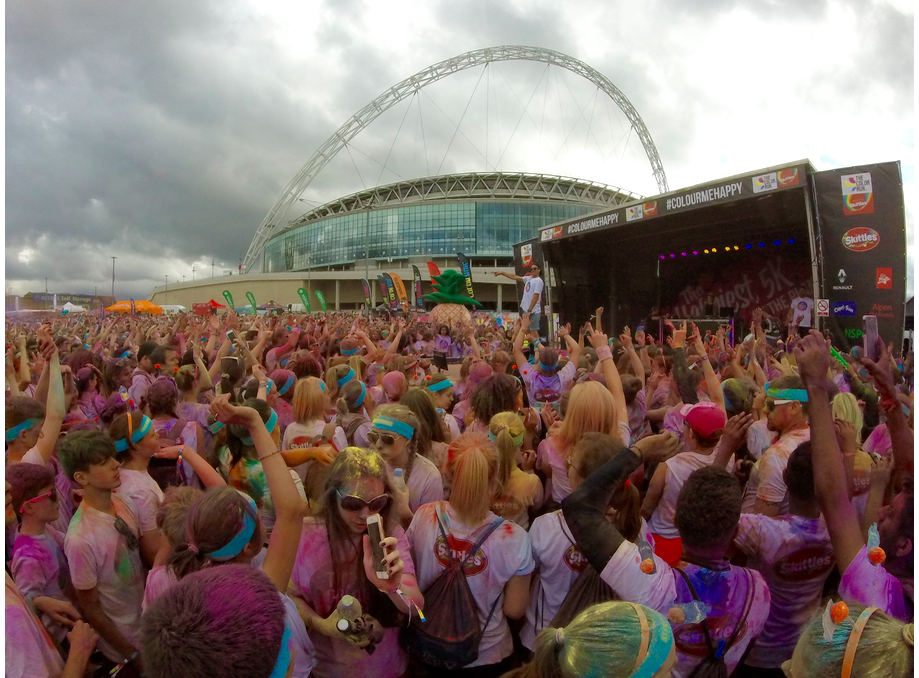 What You Need: Clothes and shoes you are happy to get a little colorful. (They provide a t-shirt).
Who’s It For: Everyone! It is perfect for beginners to running or exercise, but is also suited for anyone wanting to have fun.
How Much: Adults from £24, Under 5s are £10.
Where: London (twice), Manchester, Birmingham, Glasgow and Brighton.
Find Out More: Website.

*Health Advice: Consult with your doctor before beginning any exercise program.