Having decided to live a healthier life, I realised that my current trainers were just not the right shoes to get me to where I want to go! If the truth be told I have never invested in a good pair of running shoes, but have instead played sports in an old pair of Pumas that I bought years ago. Until recently, I had never been a runner, so an old pair of trainers were fine for the occasional game of tennis or a bike ride, but now that I have decided to incorporate running into my life, a long overdue shopping trip is a must, but where to begin? 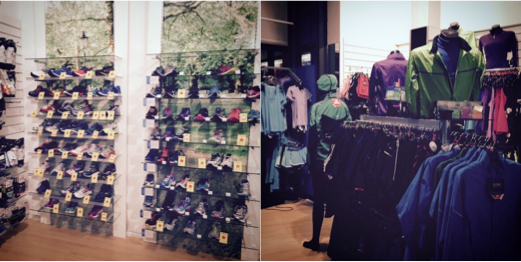 Run and Become Has a Large Selection of Shoes and Clothes

I turned to my sporty boyfriend for advice as he has several pairs of trainers that he swears by and uses for a variety of activities he participates in.

I first went to Run and Become when I moved to London almost ten years ago now – a friend recommended it and I thought I would give it a try given it was around the corner from where I lived. I was new to running and had been lucky enough to gain a ballot place for the London marathon, so thought I needed to buy the right gear, even if I had no idea…! Cutting a long story short: the shop, shoes, and marathon were a success which has led to me being a runner and returning customer ever since.

I think it is worth setting out the reasons why I am still a Run and Become regular, even though there has been a proliferation of running shops in London over last ten years as running’s popularity has soared:

As long as I continue running in London, I plan to be a Run and Become customer. I trust that they will put my interests first and will help select the best (large sized) shoe for me and my running, hopefully helping to ward off that perennial runner’s problem – injury. I place a much higher value on this than any potential savings that may be available from shopping online, especially given I have first hand experience of what it is like to be sidelined for months with a preventable injury….

Slightly nervous, I headed to Run and Become in Victoria. I arrived late on a Saturday afternoon, but despite this, the store was still busy and the staff were dutifully observing customers run up and down the pavement. Being a novice at running, I anxiously took a number and waited my turn to be watched, happily allowing Edward to go first as he knew what to expect and I was happy to initially observe! Having waited for about fifteen minutes, my number was called and I was introduced to Jana who apologised for the delay. This small act of customer service is always appreciated as the staff acknowledge your patience.

Jana looked at my stance and asked me a few questions about why I wanted to buy a pair of trainers. I never realised that there are different trainers for different sports, but thinking about it, it completely makes sense; I don’t play tennis in ballet shoes! Having told her that I wanted the shoes for general running she disappeared off and brought me back a selection of shoes to try on. Just like clothes, each shoe brand has a slightly different tolerance for size, so I tried on several sizes. Having Jana help me was extremely useful as I was not previously aware that you need to have a finger width distance between your toe and the front of the shoe. I have learned that this is necessary as your feet expand when you run, and is especially critical for those using their trainers for longer distances and marathons which I hope to run towards! I would normally have picked a shoe that fit comfortably, but tight, thinking that they would stretch and the continual use would soften the cushioning and allow the shoe to feel slightly loose. Hmm, so much to learn!

Having tried on a few pairs to find the correct size, I was then instructed to run on the pavement outside the store so that Jana could watch my running stance. Contrary to other shoe stores I have visited, which often only allow you to walk on the carpet whilst trying shoes on, Run and Become actually encourage you to run on the pavement. They give you the time to genuinely feel the shoes you are trying, with no pressure or obligation to buy! Jana had me run a few times, trying several different shoes, but we narrowed it down to two pairs for me to choose between. The shoes that suited me were ones that have the arch support as I have a tendency to roll my knees in, left unsupported, this could lead to injury. Against my previous tendency to pick a pair based on their colour and design, I trusted Jana’s opinion and bought the Asics GT-1000 given they felt comfortable while running, even though they look like Barbie’s shoes, although I quite like this actually!

Run and Become allow each customer to have the benefit of a professional watching you run and help you to choose the correct shoes. Having someone listen to my feedback whilst trying on several different pairs and making specific recommendations for me, is invaluable. They are well stocked and conveniently located in central London. Their staff are patient and knowledgeable with one-to-one customer service that is worth the short wait. This wait has the added benefit that it would certainly weed out the browsers and allow more specialised attention to those that genuinely want to purchase shoes. The staff are truly invested in their work as proven in their passion for customer service. The shop even stayed open beyond its closing time, in order to meet customer demands. The staff did this without complaint and without any uncomfortable feeling that you need to leave which you often experience in other shops. This is excellent service in my opinion, as it is directly addressing the needs of the customers!

I can’t praise Run and Become enough. I am truly grateful and impressed with their work ethic. I will definitely recommend and will be a loyal and returning customer. I never felt pressured or rushed, but instead felt educated and confident. This is important to me as I have been relatively sedentary and I needed the correct shoes to support me and reduce the risk of injury.

Find Out More: Run and Become

*Health Advice:  Consult with your doctor before beginning any new exercise program.