Before I began my health and fitness journey, I would never have thought I would or could compete in a triathlon. But here I am, two years later, having just accomplished the most athletic experience of my life; a super sprint at the Bloodwise Blenheim Triathlon. Although it has been two years, I am still on my journey and am by no means in the best shape I could be. I still describe myself as being like ‘Bridget Jones’; curvy, clumsy, but determined to power-on, ‘…and yes I will always be just a little bit fat…’ ! With a beaming smile on my face, I will attempt most things, but I don’t expect to come in first. With this in mind, I was persuaded into signing up to the Bloodwise Blenheim Triathlon and I am so glad I did.

Healthy Living London’s Hannah, ready for the Triathlon – The stunning Blenheim Palace as the setting.

Preparation was definitely essential before the event, not only in training, but in making sure we had all the equipment we needed for the day. Running kit was not a problem, but I don’t own a high-tech bike or a wetsuit. Wetsuits are required for most triathlons, so this is important to sort out before race day. Luckily, Zone3 were on hand to rent me a wetsuit. With various sizes to offer, I was able to reserve one in advance and collect at the event. As far as a bike goes, the rental can be quite pricey, but the Bloodwise Blenheim Triathlon is pretty easy going about the standard of bike you use. Whilst there were definitely a few bikes there that are more expensive than my little VW Polo, I was happy to ride my old Raleigh bicycle, despite the rust clearly showing her age. As long as the bike you use is safe, does not have a motor attached and you’re comfortable riding it, you can take your own bike, be-it a beach cruiser, mountain bike, or even a foldable one! Other triathlons are more strict, but Blenheim, a clear choice for beginners, is more relaxed about the standard of bike. However, it is imperative that your helmet is in perfect condition as you will not be allowed to race otherwise.

The wetsuit molded to my curves – Transition was busy.

The day began at the Bloodwise Blenheim Triathlon as any usual English day does; drizzly and grey! With my partner corralled into participating too, we left London early and drove to Blenheim. The Palace was clearly signposted from the motorway, so we had no problems finding our way there. Parking was conveniently located in the grounds. The event village was buzzing and was stocked with last minute essentials such as gels, water bottles and racing belts. Edward and I collected our time chips and headed to Zone3 for our wetsuits. The friendly team at Zone3 were knowledgeable and helpful when it came to choosing a wetsuit, plus they didn’t laugh as I hopped up and down, squeezing into the suit! When I was told I needed a smaller wetsuit, I was flattered, but I quickly learned, whilst breathing in and pushing my shoulder blades together as I was being zipped in, that they’re meant to be snug!

Having signed up too late to join the mixed super sprint race, Edward and I had different start times in the single sex only starts. This was a little scary for me, as it meant I had to race alone! However, it meant that we were able to cheer one another on as part of the lively crowd. The only downside to the differing start times was the vast gap between our race times; Edward’s was an early morning race and mine was the last race of the day, in the afternoon! However, we made the best of the time by taking a picnic with us, wandering around the event village and cheering on other participants.

The lemmings walk the plank!

Suddenly, I only had thirty minutes until the start of my wave, so I went through the bike check and prepared my bike for the transition. Making sure you have time to set your bike, towel, drink and any other things you want to have once you’ve finished your swim, is advisable. Time will also help to calm any nerves, rather than an anxiety fuelled rush to the start line. It is also important to remember to look at where your bike is situated because there are hundreds of bikes and they all look the same when you can’t find yours! With my goggles in hand, I headed to the start where you could see the previous wave mid-way through their swim. This being my first triathlon, I was calmed and reassured to see that there was a mixture of both fast paced front-crawlers as well as casual breast–stroke swimmers, which reiterated the acceptance of a wide range of abilities.

With bright green swim hats handed out and put on, we all looked like lemmings. We were led through a short stretch and an encouraging pep talk and before we knew it, we were told to walk along the buoyant jetty and enter the water. I opted for the jump-in as I knew it was going to be cold. If I’d dipped my toe in first, I think it would have put me off! The shock of the chilling water immediately hit me and momentarily took my breath away. I kept reminding myself of the invaluable advice from Ray Gibbs from Swim Canary Wharf to make sure you use the time before the klaxon sounds to get your face in the water, to streamline your body ready for the swim and to try to calm and regulate your breathing. 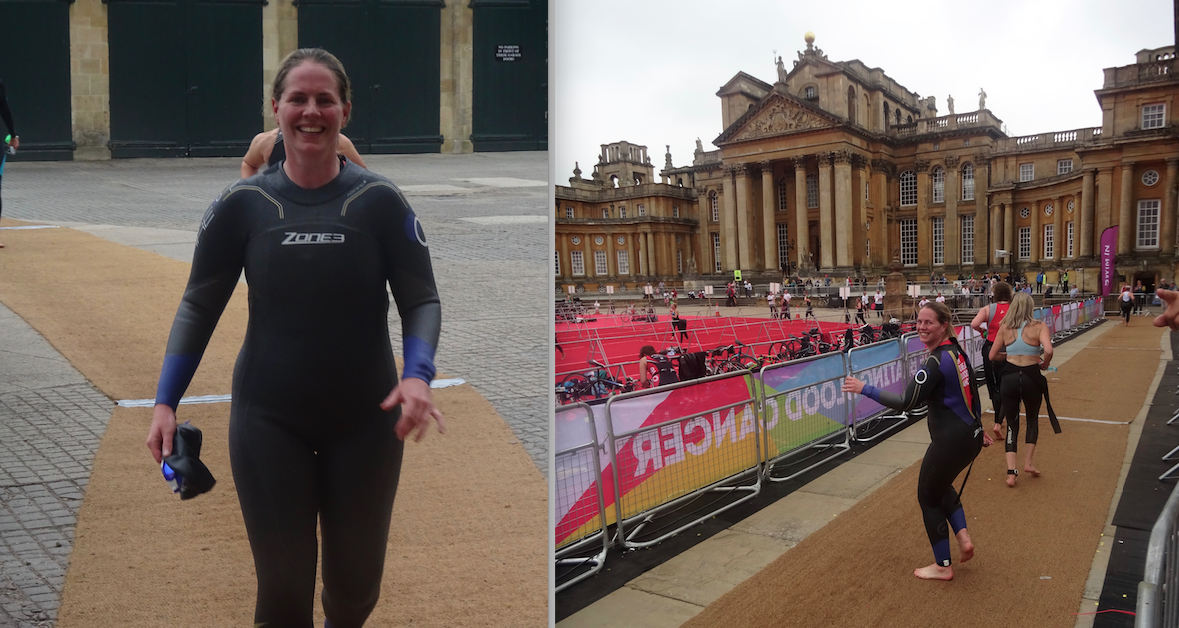 Still smiling after the swim…

As the klaxen screamed out, I began my first ever triathlon. No matter what happened next, I knew I was on course for a personal best! The water was cold and there were swimmers everywhere. After a few minutes, the swimmers had spread out and I had relaxed into a rhythm. Sighting was easier than expected as I was able to follow the swimmers that had pulled ahead. I interchanged front-crawl and breast-stroke as I made my way towards the next jetty. The swim was over quickly and suddenly I was exiting the water and I making my way up the short (but steep) hill to where I had left my bike earlier. It was easier than I thought to take the wetsuit off as the stretchy material made for a quick change. Fortunately, I found my bike quickly and my towel and water were ready for me. I put a dry top over my tri-suit as I grabbed my bike and jogged out of transition.

Transition – Cycling around the palace grounds.

You must cross the line before you can get on your bike, but when you do, you are rewarded with an almost immediate downhill start. The bike course is beautiful and takes you on a sightseeing tour of the grounds around Blenheim Palace. My little Raleigh was perfectly fine on this paved pathway around the park, which had a few climbs, but was mainly flat. The rule of thumb is to stick to the left and overtake on the right, which you should respect. With a range of abilities, people spread out quickly and I realised I had plenty of space around me! I was grateful for the extra t-shirt as the stream of air that rushed by created a few goose bumps!

With my bike laps completed, I docked my bicycle, grabbed my drink and jogged out into the run stage. The lively crowds cheered me on as I headed for the expanse of parkland once more. The run is lovely, much like going for a run in a park on a Sunday! The scenery is beautiful with the stunning palace as its central focus. The run is predominantly flat, but understandably tiring after the swim and bike; I made sure I kept going by getting into a steady rhythm. The only intimidating part was the final stretch. As I came towards the finish, what felt like hundreds of well-wishers were watching my red face cross the finish line! Admittedly, I felt a little emotional and a few tears rolled down my cheek as I hugged Edward. I had just finished my first triathlon!

A run around the beautiful palace grounds.

I am so proud that I managed to complete a triathlon, especially as I had not been well leading up to the event and had missed out on some training. However, this just goes to show that the super sprint triathlon distance is perfect for first timers and people that do not like the pressure of an advanced event. Whilst there were people there that were clearly pros, I felt welcomed and relaxed to know that there were many people, just like me, that were also first-timers. I would definitely recommend the Bloodwise Blenheim Triathlon to anyone who wants to challenge themselves, but feel that they can go at their own pace. 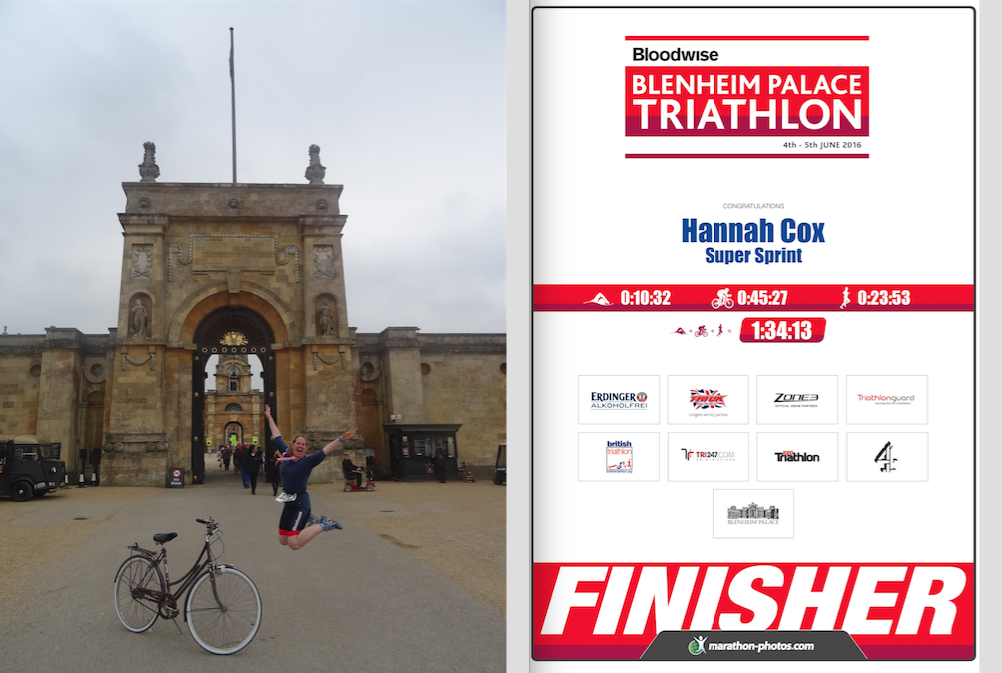 Find Out More…
What You Need: A wetsuit, your running kit, a bike and helmet. (A tri-suit is useful, but not essential.)
Who’s It For: You must be aged 17 or older to compete. The Blenheim Triathlon is a great course for beginners, but is raced by a range of abilities.
How Much: Prices start from £85
Where: Blenheim Palace, Woodstock, Oxfordshire OX20 1PP
Find Out Even More: http://theblenheimtriathlon.com/, https://racezone3.com/
Check Out The London Triathlon: http://thelondontriathlon.com/

*Health Advice: Consult with your doctor before beginning any exercise program.