It was only recently that I began my health and fitness journey and despite a weakness for unhealthy food, I am still committed, especially when finding fun ways to exercise. So, when the opportunity arose to run the muddy obstacle course, The Gauntlet Games, I immediately accepted and enrolled a willing friend to join me. What better way to spend a Saturday than tackling balance beams, foam slides, space hoppers and many more fun obstacles… 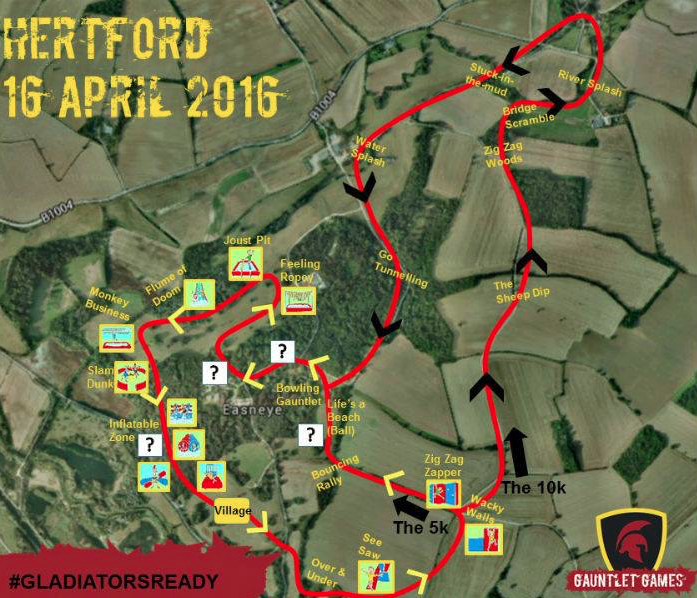 Here’s What You’ll Need For The Race:

What You Need After The Race:

The Under/Over Bars. The Joust Pit.

With my ticket in hand and my car packed with all the essentials, I headed to the Hertford course! When we arrived, the atmosphere was buzzing, despite the grey sky and slight drizzle – this is England after all! However, spirits were high and smiles were contagious. Having overheard a conversation in a field designated as a parking area, in which an attendant was having the cars park tightly together, but without leaving any space or vacant rows for cars to leave… I was already laughing. Here’s what was said:

“I’m packing the cars in tight.”

“How are we going to get out and leave?”

“Why would you want to leave?”

Well, there you have it, why would you want to leave? However, his mistake was realised in time and cars were reversed back to create an exit route. Being British, you’d expect a few mumbles, but there were only smiles and friendly giggles. The excitement and anticipation for the obstacle course trumped any usual British reaction. 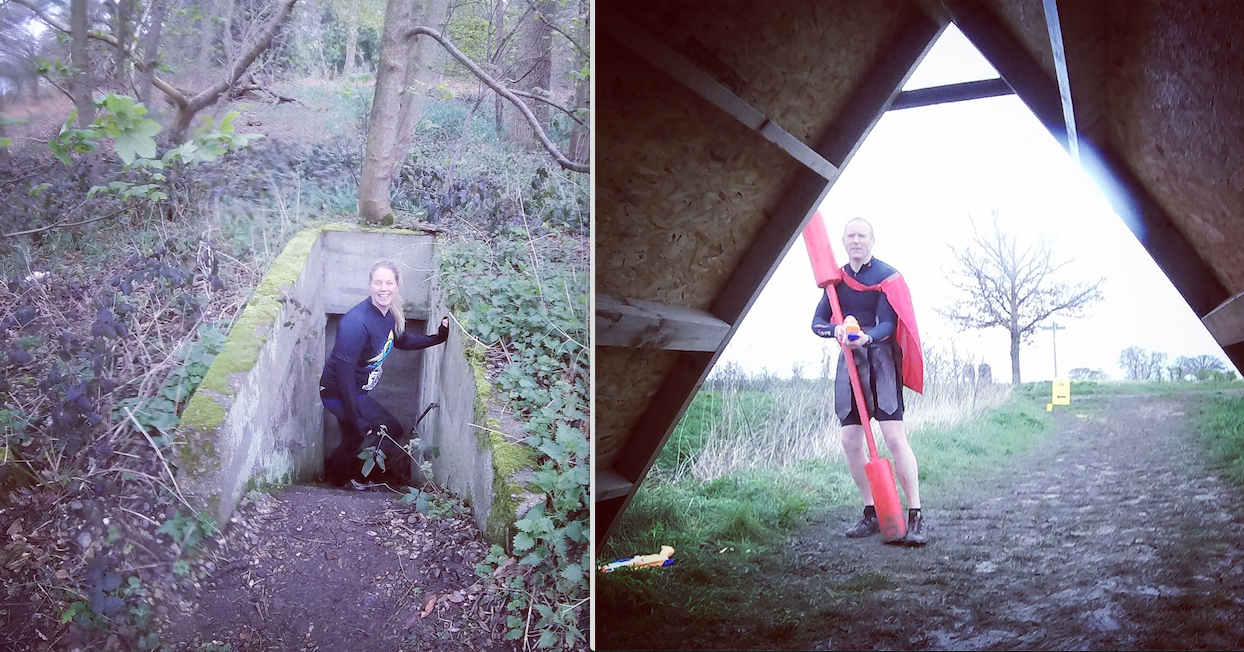 The Tunnel in the Woods! A Gladiator with a Squirt Gun!

As we made our way to sign-in, my shoes were already muddy; no avoiding the inevitable, you just embrace it! I collected my race number, attached it with safety pins (provided) to the t-shirt that they give you and headed to the warm-up area. Thrust into a mosh pit of excitable participants, the Gladiators warm you up with the usual stretches as well as a few fun hokey cokey style games – not a frown in the house, or field rather! I really liked the pep talk given just before we set off, which included statements such as, ‘team work’, ‘have fun, it’s your race’ and ‘help one another out’. Although you’re surrounded by a bunch of strangers, everyone was friendly and it felt more like you were running with a bunch of friends.

We were off! As it was my first Gauntlet Games, I opted for the 5k course, however there is a 10k option too which includes even more obstacles. The course began with a short run to the first obstacle, the over and under beams, however, our group decided it was over and over! I witnessed the teamwork as all the participants were desperately trying to clamber over the high beams, with the aid of anyone near by, despite the inevitable muddy hands that resulted from a leg-up! Laughter was contagious and challenges were embraced!

The Monkey Business Bars and the Swimming Pool!!!

The course continued around the beautiful fields and small hills, adorned with bluebells creating a fabulous setting for a fun assault course. The wacky walls provided a new set of laughs as people tried to clamber over the highest wall; a near impossible solo feat at about six feet high without any divots to assist. I managed the middle wall, with assistance from my friend, but it was tougher than you’d think! We continued through the woods and through the next few obstacles; a balance beam over a pool of water and a giant slip and slide aptly named the Flume of Doom as you inevitably slide into the mud half way down, but so much fun. I used to have a slip and slide when I was a kid, but this one was huge! I then attempted the monkey bars despite the body of water beneath me and didn’t even make it half way, but I did make a splash! 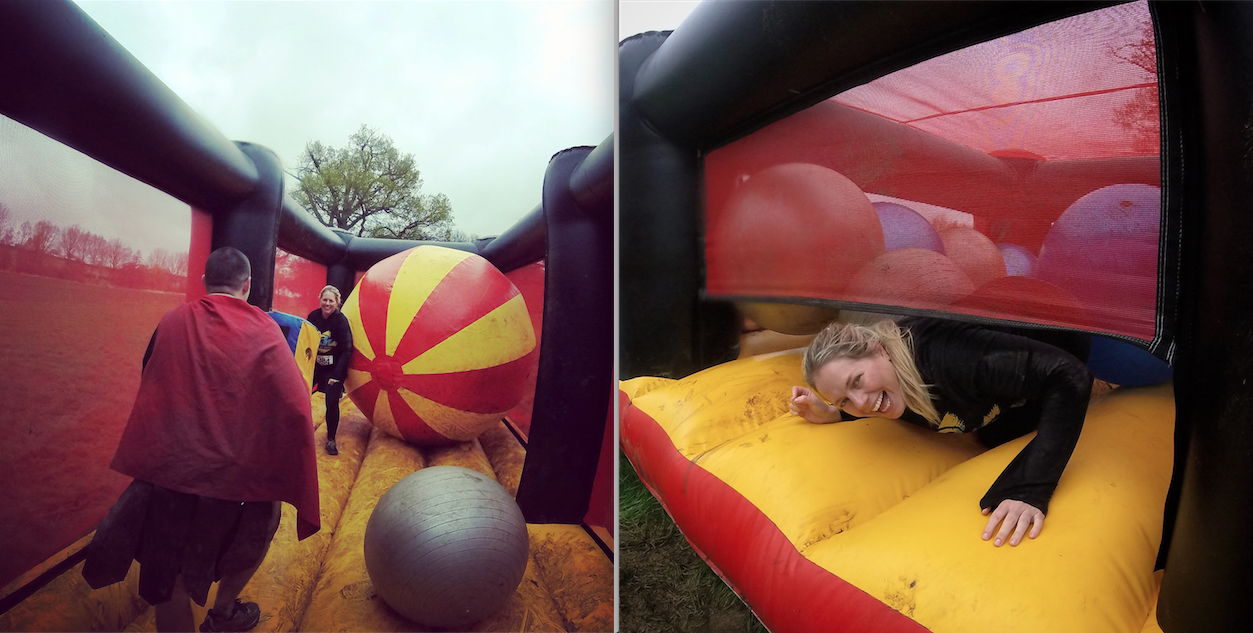 After wading through streams, navigating through (what felt like) rivers and bouncing around on space hoppers, we headed to the next wooded area. The slam dunk tested your aim as you attempted to throw a ball into a bucket. The distance wasn’t a problem, mainly the gladiator knocking them in different directions with his mallet, depriving you of the victorious whirl of a ball swirling to the bottom. If this wasn’t enough, he then tries to block your escape until you get a ball in which was amusing to watch others fail at for some time! We then headed through the woods and were directed down into a tunnel, which looked like it had been built for world war two. I’m still not quite sure what this random concrete tunnel was doing in the middle of a wooded area; it was quite scary!

With the end in sight, we entered the Inflatable Zone. We made our way through inflated tunnels then down the inflatable and bouncy foam filled slide. Tip – don’t laugh down this one, as your mouth will fill with foam! Ugh! A short run down the hill, then back up again as you battle your way through the awaiting gladiators and climb atop the final obstacle, a rope swing onto an inflated crash landing area! Once through the finish line, I felt exhilarated and wished I’d signed up for the 10k… next time.

Looking like the Michelin Man, I was pleased I had packed my post muddy course kit, including a soft towel and change of clothes! Feeling a little cold, the car heating was pumping all the way home, but it was worth it!

There were only a few things that could have made the day even better. The lack of showers, other than from typical English weather, left you quite dirty. At other similar events, they have a hose off area, which would have been useful here, as the Inflatable Zone leaves participants looking like the Stay Puft Marshmallow Man! Due to the moody weather, the event didn’t have much in the way of an after-party. The drizzle meant people left quickly and the catering vans were packing up by the time the last wave of people came through the finish line. The promised hot tea at the finish line was denied as the van had run out of water! Oversight? I was disappointed at the lack of photographers posted around the course as they seemed to be at the start and finish lines only. Luckily, I took my Go-Pro to record the day, but many of my pictures are a little blurry due to the foam, mud, water, etc! Had it been my first obstacle course, it would have been nice to have had the option to purchase pictures with a vast selection, not just the final moments.

The Flume of Doom! Wading Through Water!

I believe this course is great for first-timers as it is relatively easy, especially compared to some of the more intense courses on offer out there. If there is an obstacle that you don’t want to do, you don’t have to do it, no bullying here. The Gauntlet Games is especially fun with friends, so I would recommend setting up a team and roping in as many willing teammates as possible! A group of ‘Pink Ladies’ ran passed me, all dressed up and clearly having a blast.

I really enjoyed the Gauntlet Games and would definitely go again, but I’d do the 10k for a harder challenge and drag along more friends. There were a few obstacles that I had seen advertised, but did not come across, so these must be exclusive to the 10k course. I am disappointed I missed these, but it gives me another reason to go again! 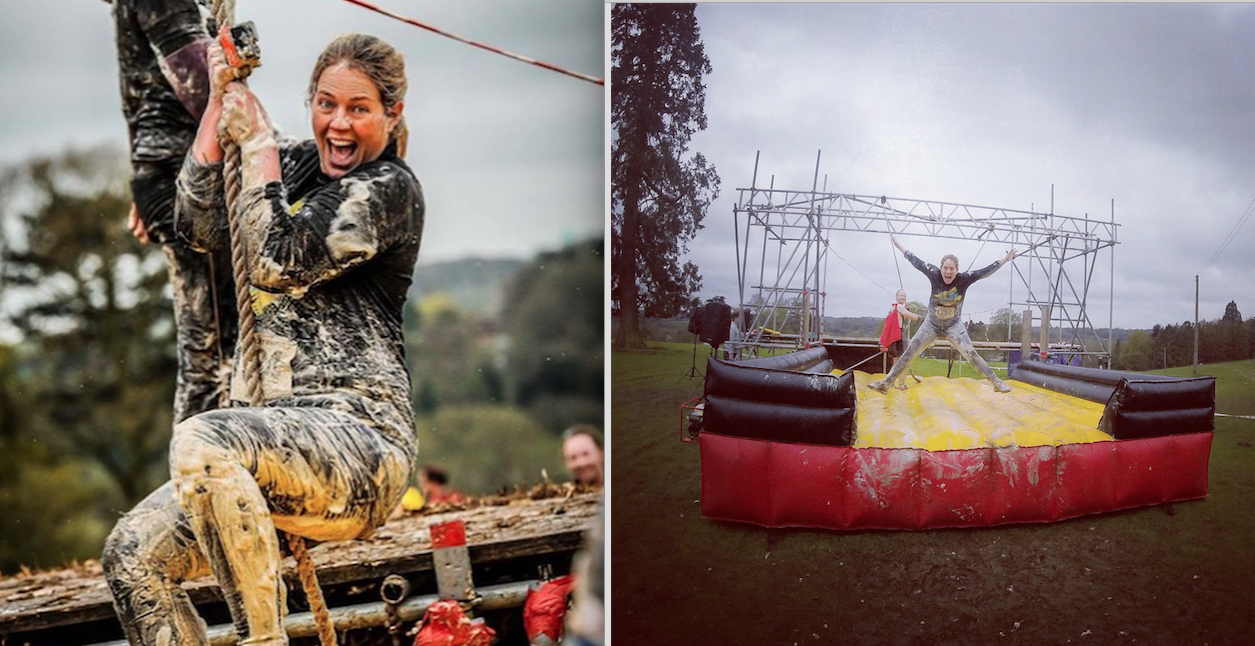 *Health Advice: It is wise to consult with your doctor before participating, especially if you have any health concerns.